The cubano ($5.45) at Luis Galindo's Latin American Cafeteria & Restaurant begins with thick slices of juicy pork. It continues with crisped Cuban bread and then crescendos amid ropes of stretchy Swiss cheese lathered in mustard. This Calle Ocho cafeteria still bears the name of its original owner. Luis' brother, Raul, was revered because he served one of the city's favorite cubanos at his Coral Way spot, which was a spiritual home for El Exilio way back when. Though Luis Galindo's was bought out long ago by a Lebanese-Syrian man raised in Cuba, it maintains its beating heart. Every day, masters take the pulpit at the restaurant's center to slice and stack sandwiches. By noon, the place is serving at a fever pitch as crowds squeeze in to pay their respects and take a bite of history. 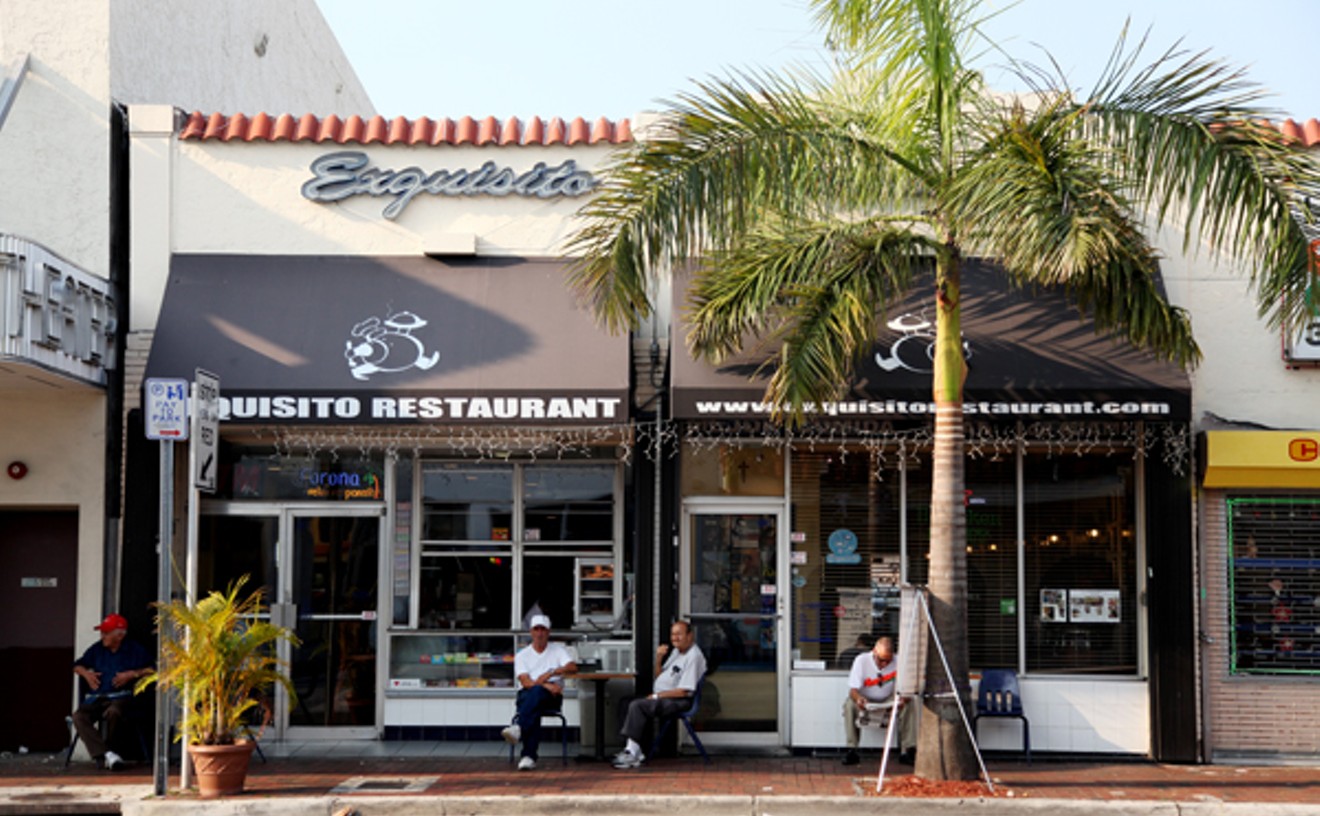 In 2002, a cop named Alex Hernandez began stopping at Calle Ocho's El Exquisito for a caffeine-and-medianoche refuel. Even after he left the force, he remained a regular. So when Heliodoro Coro, who opened the place in 1974, put it up for sale in 2011, it was easy to figure out who should take over. Hernandez quickly retooled the kitchen, brought in a new chef, and now pumps out pristine Cuban fare for camera-toting tourists and ravenous locals alike. The rotating list of daily specials is the reason to return. Finish your Monday with long-braised oxtails ($9.99); this unctuous, fatty meat slips rights off the bone. On Tuesdays, pause for lunch with fabada asturiana ($4), studded with meaty white beans and tangy rounds of the blood sausage morcilla. Meanwhile, the medianoche ($5.75) is perfectly reliable any time of day throughout the week. Sweet egg bread is pressed to a pleasant crunch on the outside, but it remains fluffy inside. The pork is perfect, and the juicy, savory shreds rest atop a layer of gooey Swiss cheese that provides a barrier for a mountain of sweet-salty ham. So don't fear the tour buses. In fact, show the visitors where to go. You're a banana republic ambassador.

Have you tried real, true shrimp croquetas? If you haven't visited La Gamba, the answer is probably no. This Coconut Grove stalwart is the only place we know of that fries the golden spheres of béchamel first and then adds the beloved crustacean. La Gamba provides a fresh take on classic homestyle Spanish cooking. The gazpacho ($8) has just the right balance of acidity and sweetness. The texture is neither too creamy nor too chunky. Also flawless is the fideuà ($18), a dish similar to paella that replaces rice with baked noodles. Another thing you've probably never had before: huevos estrellados con chanquetes. Translation: broken eggs (as in fried organic eggs) with browned baitfish ($12). Get it for dinner or brunch with a glass of vino. Like everything else on the menu at La Gamba, it deserves to be devoured.

Few eating experiences are as glorious as the one found inside fritangas. They are wonderlands of hangover-friendly delights. Take, for instance, the ubiquitous queso frito. The fat rectangle of fried white cheese is carne asada's longtime friend. But leave one sitting on a steam table too long and it goes from a bubbly, crisp, and slightly gooey treat to a chewy, flimsy mess. Chayito's is the rare Nicaraguan spot where the cheese is fried à la minute, as the French would say. Every platter of juicy carne asada ($8.50), baby churrasco ($11.50), pork ($8), and chicken ($8) comes with rice, tortillas, maduros, and salad, but be sure to order the cheese for $2 extra. You won't regret it. 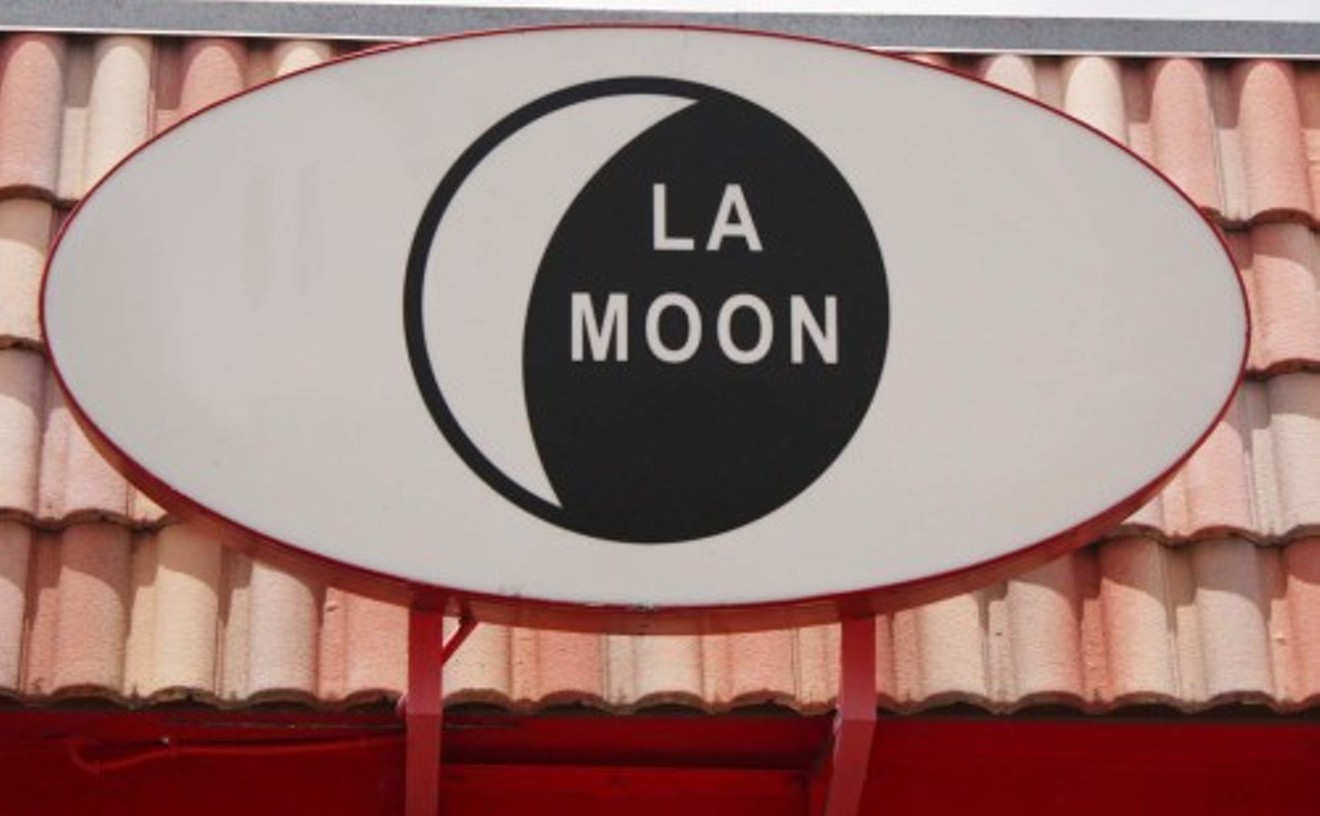 Wolves howl when the moon is full, but Miamians head to La Moon for late-night Colombian hot dogs, arepa burgers, and yuca frita. In any other American city, the go-to drunk food is hot dogs, burgers, and fries. Here, Miamians are fortunate enough to get this kind of fare with some Colombian flair. The supermoon perro ($6.99), for instance, comes with smoked sausage, bacon, and a quail egg. It's artistically drizzled with five sauces and topped with potato sticks for some crunch. Need more? This place serves arepas bigger than your face! If you miss your La Moon late at night, no worries — it's open in the morning with that classic Colombian hangover cure: sancocho. The Colombian soup is served with beef daily, but Fridays you can get sancocho de gallina served with rice, salad, and a cornmeal pancake.

With all of the very good Mexican eateries in Homestead, it can be difficult to settle on just one. But after you saunter into La Cruzada's auburn building, you know you're in the right place. There are the hulking tortas, the massive mound of spinning pork for tacos al pastor, and the canoe-like huaraches that magically float by, leaving a nutty-spicy aroma in their wake. The kicker is the pambaso ($5.49), a football-size loaf of bread dipped into a red guajillo chili sauce and served with carne asada and roasted potatoes. A squiggle of sour cream and a sprinkle of salty cotija cheese ensure that if you make it back to work, you'll be doing little other than dozing off. 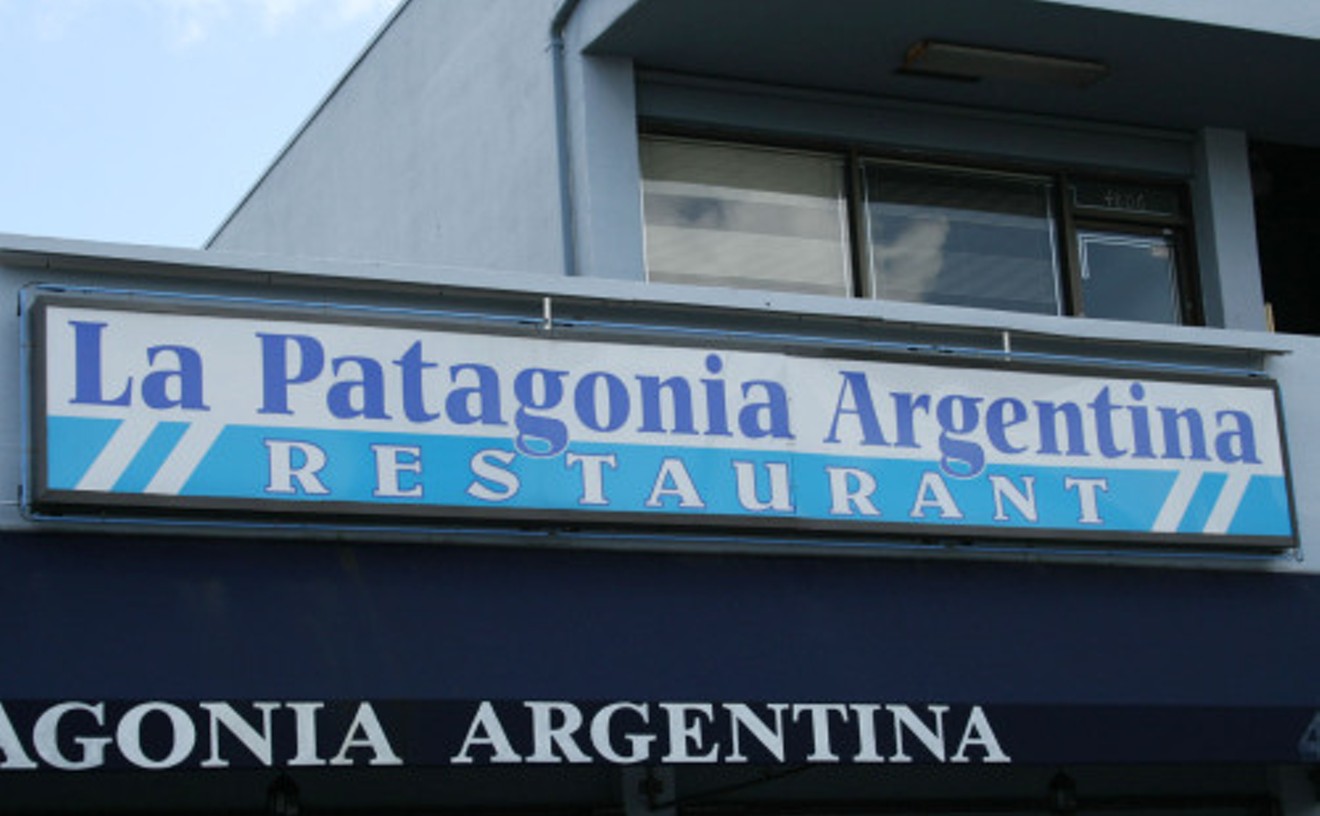 Argentina is much more than pampas, the tango, and carne. And Argentine restaurants are some of the best this town has to offer. At La Patagonia, named for that nation's southern reaches, you get a long list of good stuff, including free valet parking; a cozy atmosphere; delectable empanadas ($2.50) to start your meal; homemade pasta such as linguine, fettuccine, gnocchi, and ravioles de espinaca with spinach and mushroom fillings; reasonably priced steaks like bife de chorizo (a 16-ounce grilled New York strip) with mixed greens for $16.95; a parrillada platter packed with skirt steak, short ribs, flap meat, sausage, blood sausage, and sweetbreads for $16.50; and a panqueque de dulce de leche (caramel crepe) to close out your meal for just $5. There are bonuses too: Food is likely to be delivered by the friendly owners. You receive 50 percent off the food portion of the bill on weekends, And you get a bonus with your bill: a coupon card for half off your next visit — as if you needed more incentive to return. Winner, winner, steak dinner! La Patagonia Argentina is more than a fine restaurant. It's a revelation in hospitality.

Rooster sculptures guard this pocket-size, cafeteria-style spot in Little Havana. That may be because El Gallito Coffee Shop offers far more than just a stiff, sugary cup of café. Stop by in the morning for hulking baleadas. The chewy flour tortillas cost only $4 each and come stuffed with soft-scrambled eggs, refried black beans, and (usually) a fan of sweet Florida avocado slices. Later in the day, order the pollo ceibeño ($9). The iconic Honduran preparation offers a protein — in this case a pair of thick-crusted fried chicken thighs atop a mound of fried plantains crowned with curtido, a ripping-hot condiment made of fermented cabbage, carrot cubes, and red onion. Grab a container to go. 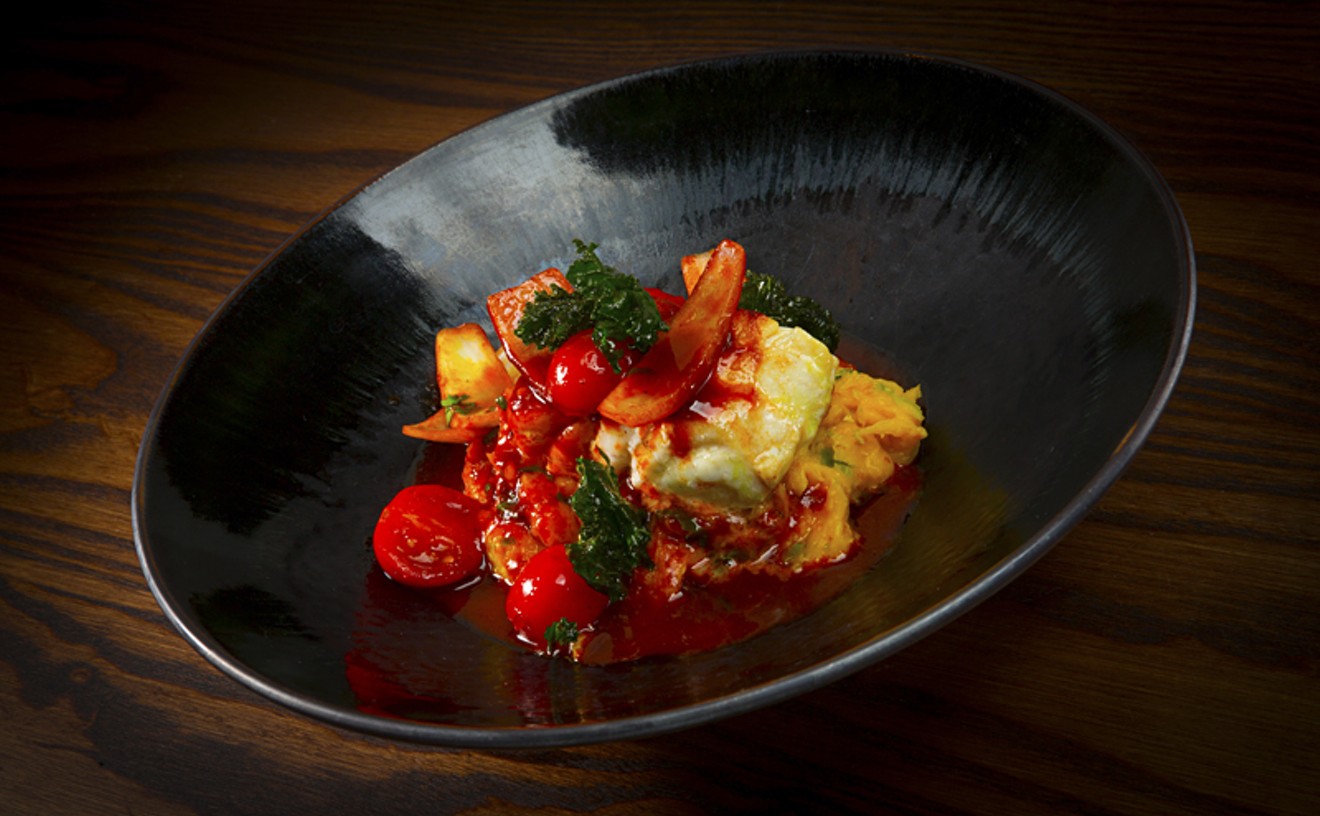 Gastón Acurio needs no introduction. The chef, restaurateur, and official ambassador of Peruvian cuisine is to Peru what Jacques Pepin is to France. Acurio has opened 40 restaurants worldwide, including his flagship Astrid & Gastón in Lima, which is ranked number two on TheWorlds50Best.com's list of the top restaurants in Latin America. But that's not the only one of his establishments to earn a place on the coveted roster. La Mar's outpost in Lima sits at number 14. Now on Brickell Key, you can get a taste of Peru's (and Latin America's) best without having to fly overseas. Simply pay for valet parking (free during lunch and $12 at dinner with validation) at the Mandarin Oriental. A universe of Nikkei (the fusion of Japanese and Peruvian) flavors awaits you. Try the inimitable chaufa aeropuerto ($26), which combines Chinese sausage, roast pork, shrimp omelet, Nikkei sauce, and pickled salad with pan-fried rice in a superheated stone bowl. Or check out the day's catch, fried whole and steeped in a Peruvian-Japanese spicy sauce ($49). Adventuresome eaters can nosh on veal or chicken heart skewers from the anticucho grill. Of course, the plethora of ceviche options shouldn't be overlooked — the citrusy fish staple of Peruvian gastronomy is what made Gastón Acurio and La Mar household names. 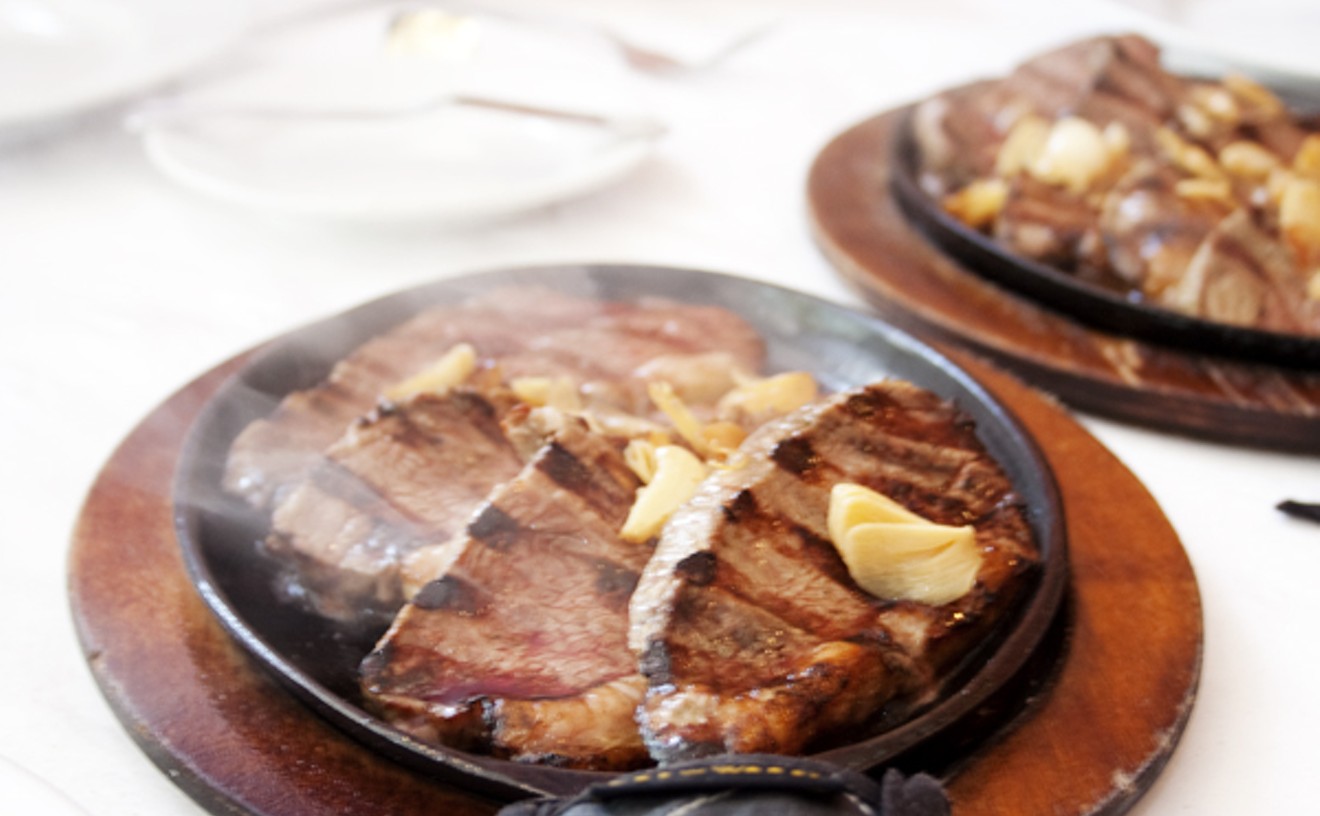 They say good things come in small packages, but condensing a region the size of Brazil into one restaurant is quite a feat. Little Brazil in North Beach gives you a taste of flavors from the largest country in South America. On weekends, feijoada — the national dish — is served. It's a black bean stew with fresh and dried beef, salted and fresh pork, bacon, sausage, and ribs. This meaty masterpiece is served over collard greens with orange slices and farofa. There is also excellent churrasco, but one dish that steals the show every day of the week for lunch and dinner is the Salada Little Brazil ($16.95). It has plump pieces of Brazilian sausage and jumbo shrimp in a garlic, white wine, and lemon butter sauce over mixed greens, palm hearts, tomato, and carrots. Go little in a big, Brazilian, and beefy way!