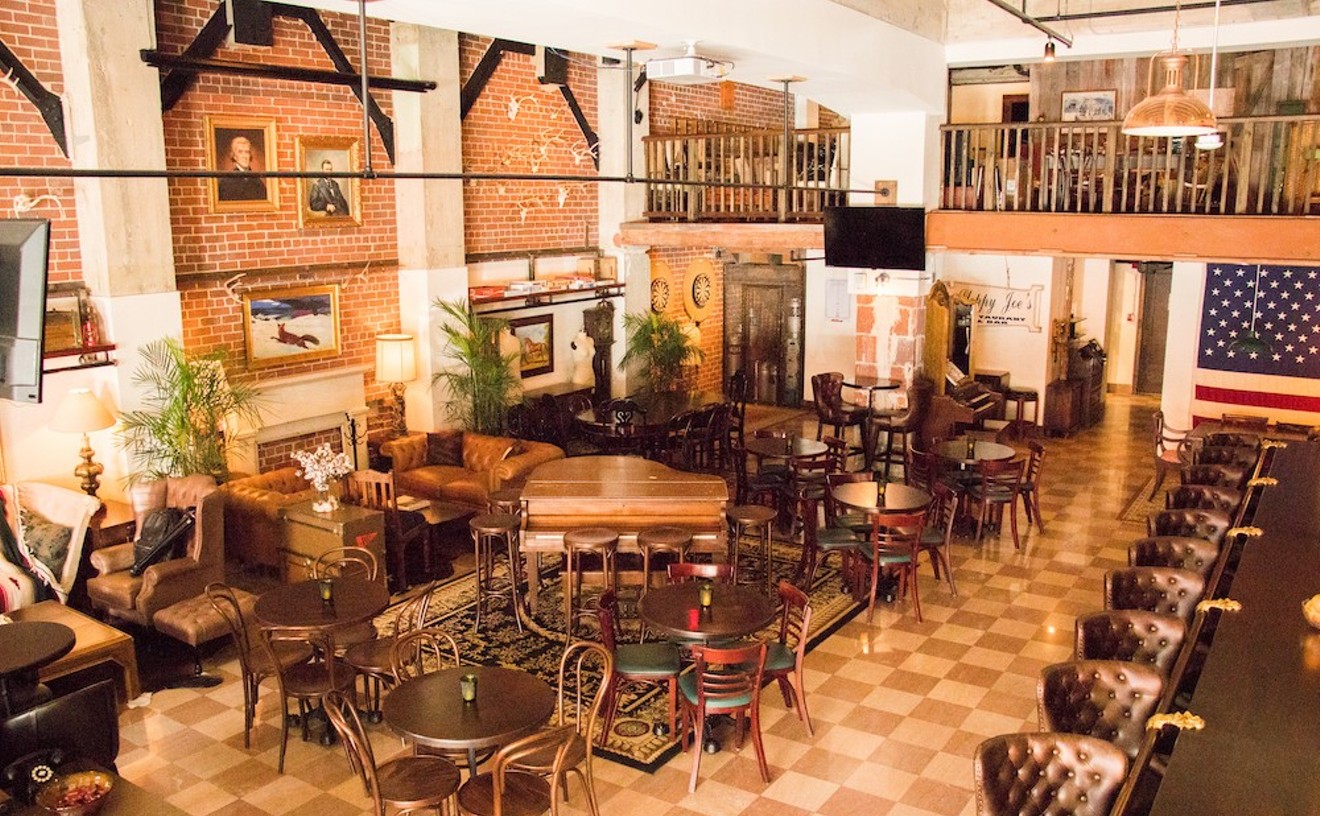 This is Miami, gentlemen. A well-put-together look is a must. Still, far too many men in Dade County forget the prime directive of fashion: Style looks best when it appears effortless and relaxed. Eschew those bespoke suits and high-end designs for the classic Americana and pick up your next outfit at Lost Boy Dry Goods instead. Brothers Randy and Brian Alonso, who grew up with a knack for the retail business, run the shop. Their family owns La Epoca department store downtown. But at Lost Boy, the brothers have complete control over the store's feel and vibe, which veers closer to Rocky Mountain rustic than Miami's neon glow. The store carries labels such as Scotch & Soda, Puma, Levi's, Retro Brand, and Juntos — all reasonably priced. The store's biggest draw, though, is its denim selection. If you're looking for gaudy and excessively studded jeans, look elsewhere. The offerings here are classic and flattering, in keeping with the store's Americana aesthetic. And though the menswear brought us in the door, the shop carries a fine seletion of clothes for the ladies as well.

Between The Real Housewives, the gossip mags, and the paparazzi dashing around South Beach, Miami puts plenty of its dirty laundry right out there in public. Think about taking it to the Neighborhood Cleaners instead. No matter how filthy your clothes are, the crew at the Cleaners will leave your specialty button-downs and fancy gowns looking new. Care aside, the secret behind the dry cleaner's spotless rep lies with the products they use. One of the greener places around the mostly industrial neighborhood of Doral, the Cleaners is supplied by GreenEarth, "the largest brand of environmentally friendly dry-cleaning solvent," which is nontoxic, free of harsh chemicals, and gentle on clothes. The Neighborhood Cleaners also offers alterations, shoe repair, and tailoring services. The prices are reasonable — shirts start at $5.99, pants cost $6.50, and dresses vary based on length and design but typically run around $12 — and those who pay upfront receive a 10 percent discount. Free delivery to select areas, mainly around Doral, is also available. Next time you're wondering how you'll ever remove that suspicious stain from that dress your sister let you borrow, the Neighborhood Cleaners has your back — no questions asked.

Being a sneakerhead ain't easy. It takes a special kind of retail addict to get in line at midnight at Foot Locker in the mall the day before a limited-edition run of Jordans drops. You don't see flossy ladies mobbing Nordstrom for a shot at a sweet pair of rare goatskin Louboutin heels, do you? Why stress yourself when there's not one, but two spots in Southwest Miami-Dade serving the really exclusive kicks. Founded by a pair of Kendall bros in 2012, the Edition Sneaker Boutique swears it will have its customers looking mad ill from head to toe. For starters, the Edition is the official U.S. authorized retailer for Miami Heat star Dwyane Wade's signature shoe, Way of Wade, by Li-Ning. "The only other place to get them is on Li-Ning's online store," says Edition co-owner Nick Chang. "We have been selling Wade's shoe since we opened, but it took us about a year and a half to get the account." Now's that what you call reppin' the 305. Chang, 18, teamed up with his buddy, Michael LoBue, 20, to open their first location on SW 136th Street three years ago. "We just want to help the sneaker community out here by bringing something to Kendall," Chang says. "There were no stores really selling exclusive sneakers here. Before, you had to drive 20 to 30 minutes to find a good sneaker store." Chang, who purchased his first pair of exclusive kicks (the DMP Raptor Jordan 7s) when he was 13, says the Edition also carries Asics, Nikes, and Jordans, as well as popular streetwear such as 10 Deep, Billionaire Boys Club, and local brands Lyfe Brand and Miami Native. And the prices, ranging from $70 to $320, won't burn a hole in your paycheck or allowance. The stores have also held special events with Heat players such as James Ennis, Mario Chalmers, and Udonis Haslem. "We are opening another store in Doral in November," Chang says.

In an endless sea of chain department stores, Capretto Shoes is one of Miami's few shops where shoe lovers can still buy local. Even better, this South Miami store has a smartly curated selection of designer women's shoes — including familiar names like Jimmy Choo, Prada, and Balenciaga — set in a beautifully decorated modernist salon. You can also snag a designer handbag while you're there, and Capretto sells its own label alongside iconic designers such as Valentino. The shop must be doing it right, because Capretto opened its doors in 1983, which, by Miami standards, makes it an historic landmark. Capretto isn't a discount outlet — that perfect design by Alexander Wang, Fendi, or Gianvito Rossi doesn't come cheap. But the budget-conscious can wait for Capretto's sales and score last season's lines at a serious discount.

Chaos theory: a mathematical field of study, most famously backed by Jeff Goldblum's character in Jurassic Park. Also, it's an apt description of what you'll encounter on a typical Saturday morning at Red White & Blue Thrift Store. Thousands of shoppers jostle and carom among the hundreds of racks jammed with every conceivable clothing item, all priced to fly off the shelves. Viejitos grab guayaberas by the handful, hipsters flip through faded rec-league baseball T-shirts, moms force kids' feet into Velcro slip-ons, and young Republicans grab pinstriped three-piece suits. And you know what? It's beautiful. There's no better representation of Miami in all its diverse, bananas weirdness than the bargain-mad crowd understandably crashing through Red White & Blue's gates every weekend. 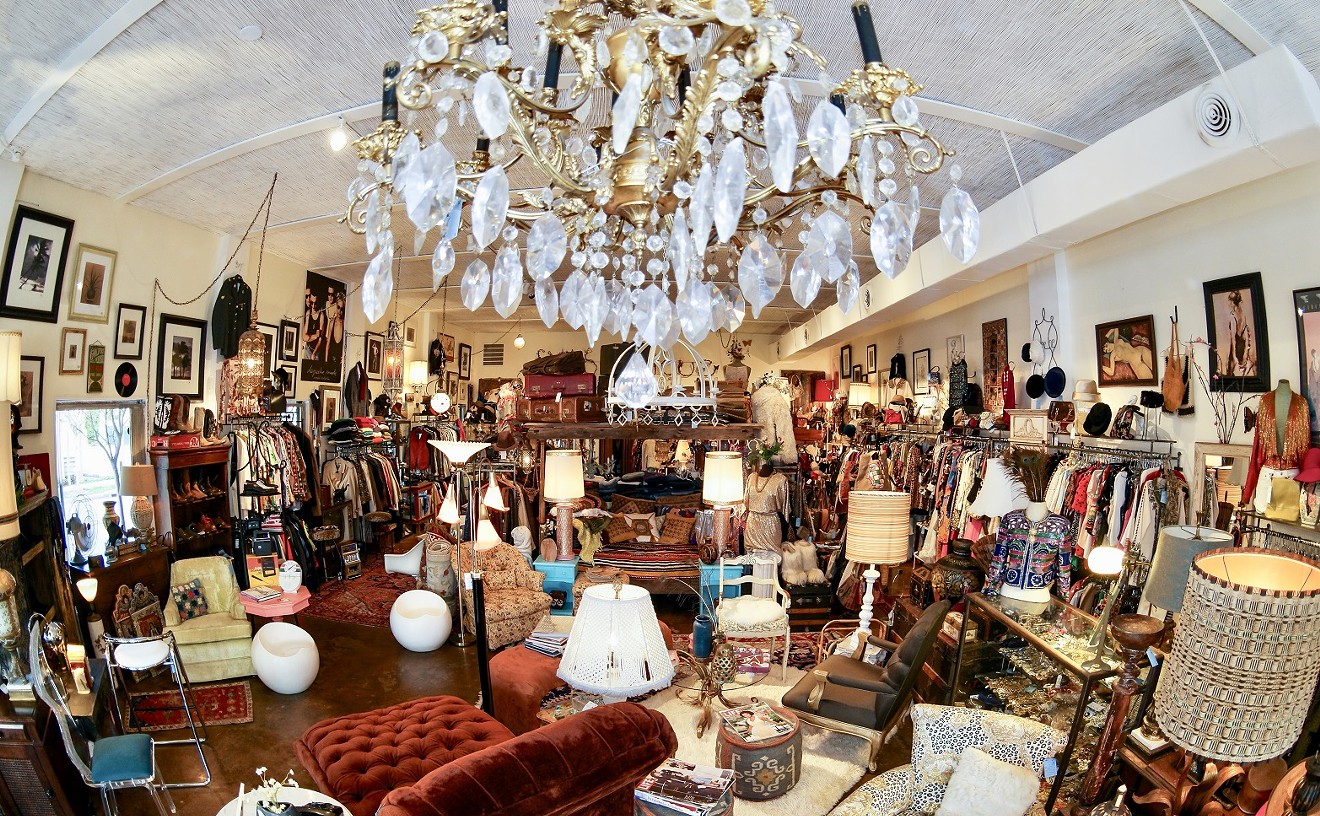 A funky bass groove kicks into gear. Wide-legged orange polyester pants fill your vision. You feel your cranium and — is that an Afro? It's not your imagination or an accidental trip into a hot-tub time machine; you've just walked into the '70s-inspired section of Fly Boutique, where wrought-iron chandeliers, tufted velvet sofas, and midcentury lamps transport shoppers to another era. Of course, you don't have to hang out in the Carter administration. Fly offers more than ten decades' worth of vintage goods, many from a variety of designer labels. There's a $650 Devi Kroell python handbag, a $120 pair of 1950s paisley Evins shoes, and a '70s Christian Dior chain belt. Talk about a time warp.

There's a reason Fashion Week jets south from New York City to South Florida to show off the latest in designer swimwear every year: In the Magic City, swimwear is serious business. And Mermaids Swimwear is a store that understands that swimwear is central to the social fabric of our fair city. The store — which owner Jessica Sierralta opened in 2000 in South Miami — offers pieces by major designers such as Mara Hoffman, Kai Lani, and Acacia. From bikinis to monokinis, flattering one-pieces, and fashionable cutouts, Mermaids carries just about every style of swimsuit, while also understanding that swimwear is a total look. After all, you can't show up at a Miami Music Week pool party in only a swimsuit. So Mermaids also carries a selection of shoes, including pretty Cocobelle gladiators and supercomfortable Havaiana flip-flops, tote bags, and coverups. Prices vary widely, with swimsuits running $100 to $300 or more and shoes $32 to $150.

Marie Antoinette lilac-and-cherry-blossom lavatory mist. Essential oils and perfumes imported from Farmaceutica di Santa Maria Novella, the world's oldest pharmacy in Florence, Italy. Wavertree & London black-fig natural-oil scented soap. No matter where you turn, there's a gem waiting at the Olfactory Company. Though the name suggests the Coconut Grove shop is all about the smell, your eyeballs get a great workout too when you step into the Florentine Plaza storefront. It's like walking into a labyrinth of curiosity, where you'll find everything from Mr. Bean air fresheners to vintage ceramic Chewbacca plates ($75) to edible rose petals and loose-leaf tea collections (about $12.50 for three-to-four-ounce tins or bags). Trinkets and oddments aside, the Olfactory carries a vast collection of European chocolates and old-fashioned candies, as well as plenty of past-century toys such as puppets and wooden Czech playthings. But these purveyors of fine goods frequently change their inventory. So although you can always expect to find knickknacks of all sorts, you never really know what treasures you'll stumble upon next.

Putting a word like "genius" right there in the name of your shop is a bold maneuver, but for a decade, Genius Jones has been living up to its moniker by stocking products that make Miami parents' jaws drop in amazement. The philosophy at this Design District shop is that kids' products can be both functional and beautiful. Take, for instance, the sleek white "Elephant" crib ($718): This modern piece can be assembled in ten minutes (take that, IKEA!), and when you don't need it, it can be easily disassembled and stored in small spaces. When you stare at the strollers (which range from $470 to $,1399), you'll wonder when this high level of technology came to the baby genre. But don't quake at the learning curve, because the employees are experts when it comes to demonstrating how to use the gear. Genius Jones is also a great place to find out-of-the-box baby gifts such as onesies with slogans such as "my mommy has more tattoos than your mommy," and "#dontdropme," which cost $24 each. And though the goods are for children, adults will definitely have more fun shopping here. It's truly genius. 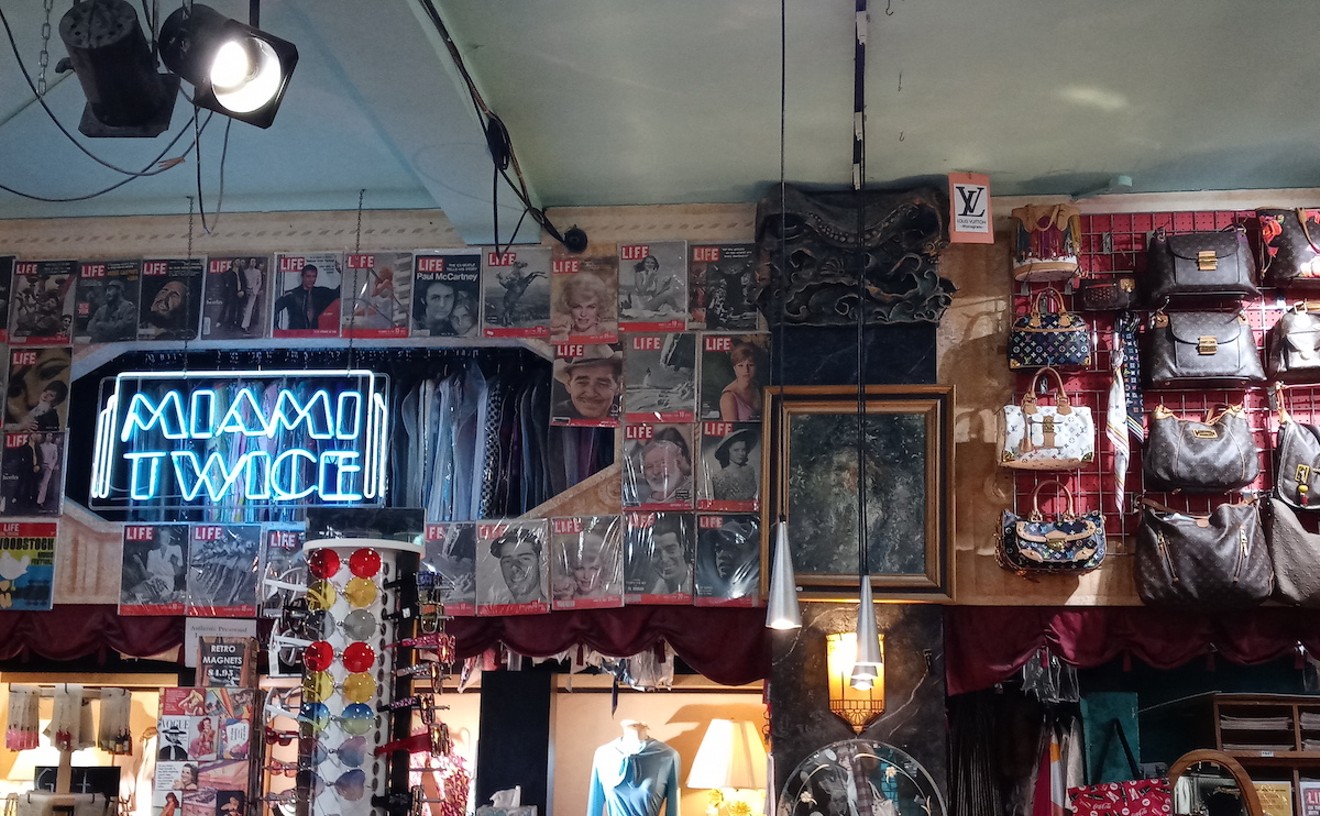 With 30 years of retail greatness, this family-owned-and-operated boutique is no secret. Yet there are still those among us in Miami who have never experienced the sheer bliss of finding the perfect retro bathing suit or vintage hat. At Miami Twice, you can feast your eyes on the fashionable finds from all the best-dressed eras the modern world has ever known. Why go to that '20s-themed party in a cheap, tacky flapper getup from a chain costume outlet when you can grab a fringed frock and elbow-length gloves that will last longer than that Halloween hangover? The best kind of costume is the one that doubles as actual streetwear, and we all know the '60s will never go out of style. If you're looking for something "now," the front of Miami Twice comes stocked with airy designs every lady should own. In the middle, you can find retro items — things that look old but are actually new — and the back holds all of the real vintage gems. We don't know who the connect is, but Miami Twice has the finest and most enviable collection of garments we've ever seen. Besides the clothes, there are sunglasses, accessories, purses, shoes, corsets, knickknacks, sewing machines, boas, scarves, and even vinyl records if you need some mood music to go with that magical gown. The quality of everything is outstanding, and there's a classic costume section for those looking for a more traditional Halloween feel. But we say go all out and do it right. This isn't Forever 21, so expect to pay realistic vintage prices. Fortunately, Miami Twice has a layaway program if your wallet screams at your costume's cost.