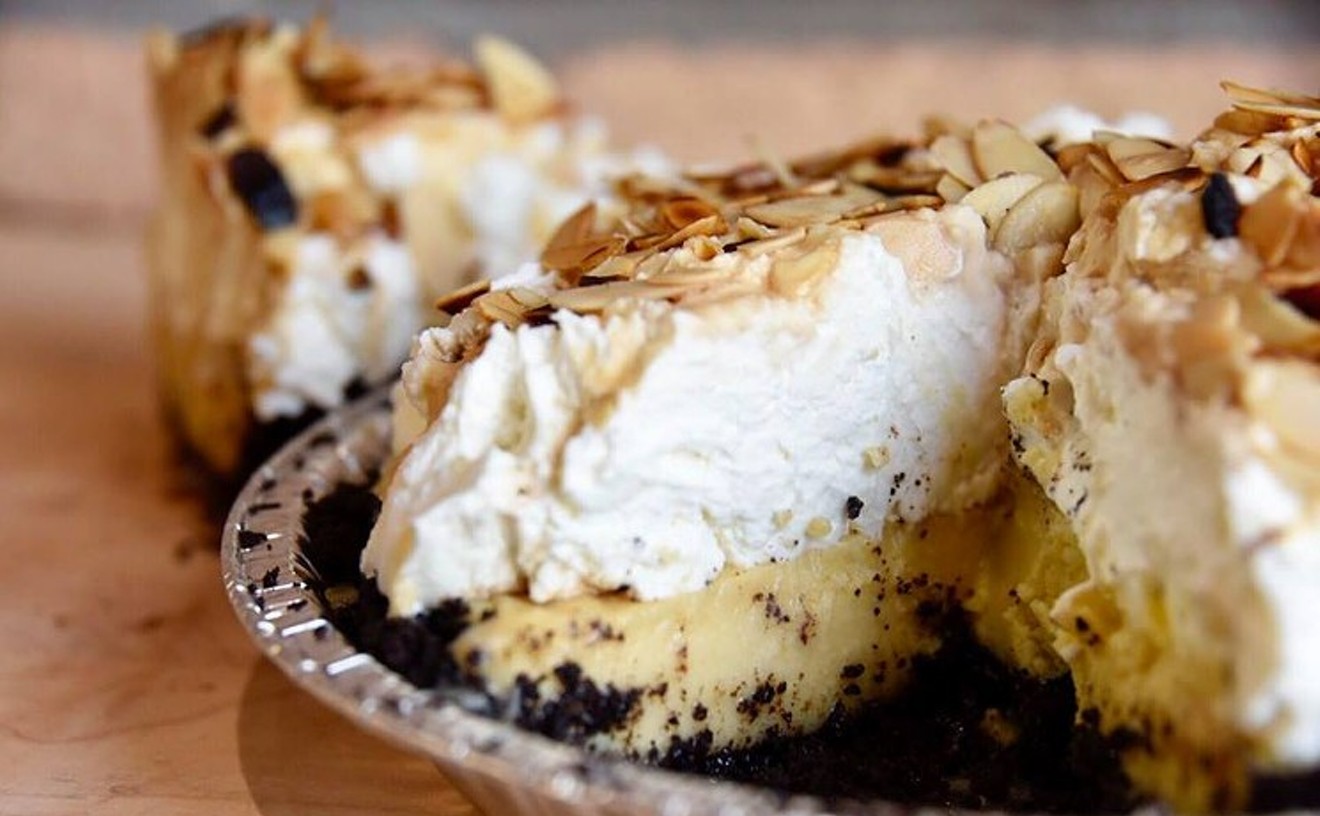 You know the saying: Firefighters make darn good pie. No? Well, it should be a saying considering fireman Derek Kaplan bakes the most luscious ones in town. Kaplan's story began with an affinity for baking at the age of 15. Then he grew into a six-foot-tall college football player and, after graduation, took a job as a firefighter at Miami's Fire Rescue Station 1. But between putting out blazes and rescuing cats from trees, he turned a rundown Wynwood storehouse into a vibrant bakery. It's a sliver of a space, but its mural of psychedelic pies is just the right way to illustrate his flagship creation: the key lime pie. Everything is done in-house using the good stuff — from the buttery graham cracker crust to the plump key limes (he and his crew go through 300 to 400 pounds per week). It's easy as pie to take home a whole one for $25 to $30. Want to practice sweet restraint? A single slice will set you back $5.40 — but good luck eating just one. 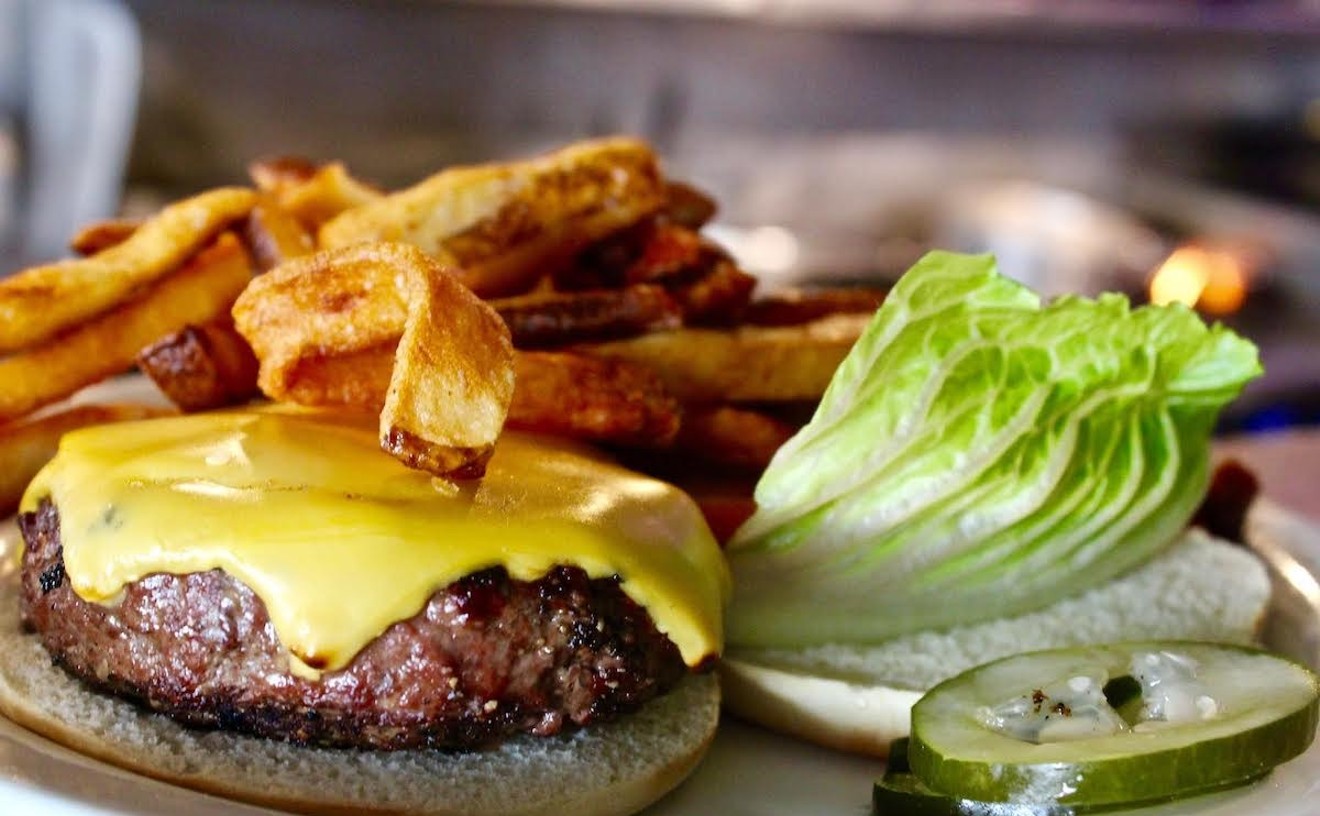 Danny Serfer is the slick of mayo inside a Taleggio-and-Gouda-stuffed grilled cheese. He's the dollop of caviar atop scrambled eggs and white bread. Junk food and highbrow ingredients don't exist for this South Florida-born-and-raised chef. Everything is delicious. First came the Allen Susser protégé's diner-style Blue Collar, with gut-busting sandwiches and parm portions large enough to strike fear in the heart of the sturdiest Italian-American grandmother. Next came Mignonette, a seafood bar that shamelessly offers caviar alongside fried shrimp. Serfer's greatest success is his ability to vacillate between borderline-stoner grub and pinkie-out cuisine while consistently delighting diners. Only with Serfer can you relish crawfish gumbo and foie gras in the same meal. 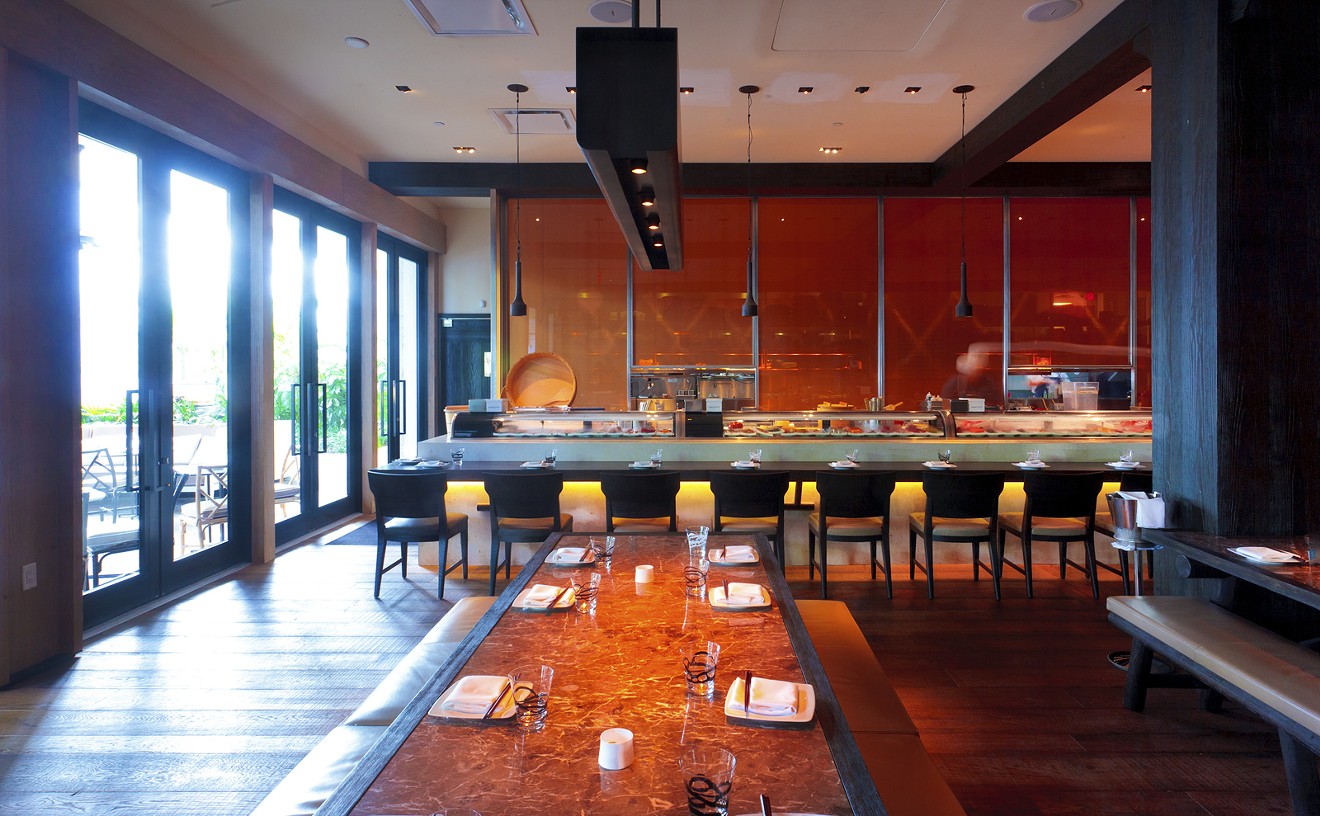 In Miami, it seems everyone is from somewhere else. But not everyone embraces this wacky, sun-and-drama-soaked city like Philadelphia restaurateur Stephen Starr. He has opened restaurant after restaurant that has added whole new dimensions to the subtropical diet. First came Makoto, his pristine Bal Harbour Japanese spot where Morimoto protégé Makoto Okuwa plies some of the city's freshest fish. Next came Verde and Ted's at YoungArts, two eateries that are helping to fuel and spread downtown Miami's cultural renaissance. Soon to arrive will be the Continental, a midcentury-Philly import that will give Miami Beach some Mad Men flair. So go ahead, have a three-martini-and-club-sandwich lunch. Tell your boss that Starr said so.

The Restaurant at the Setai 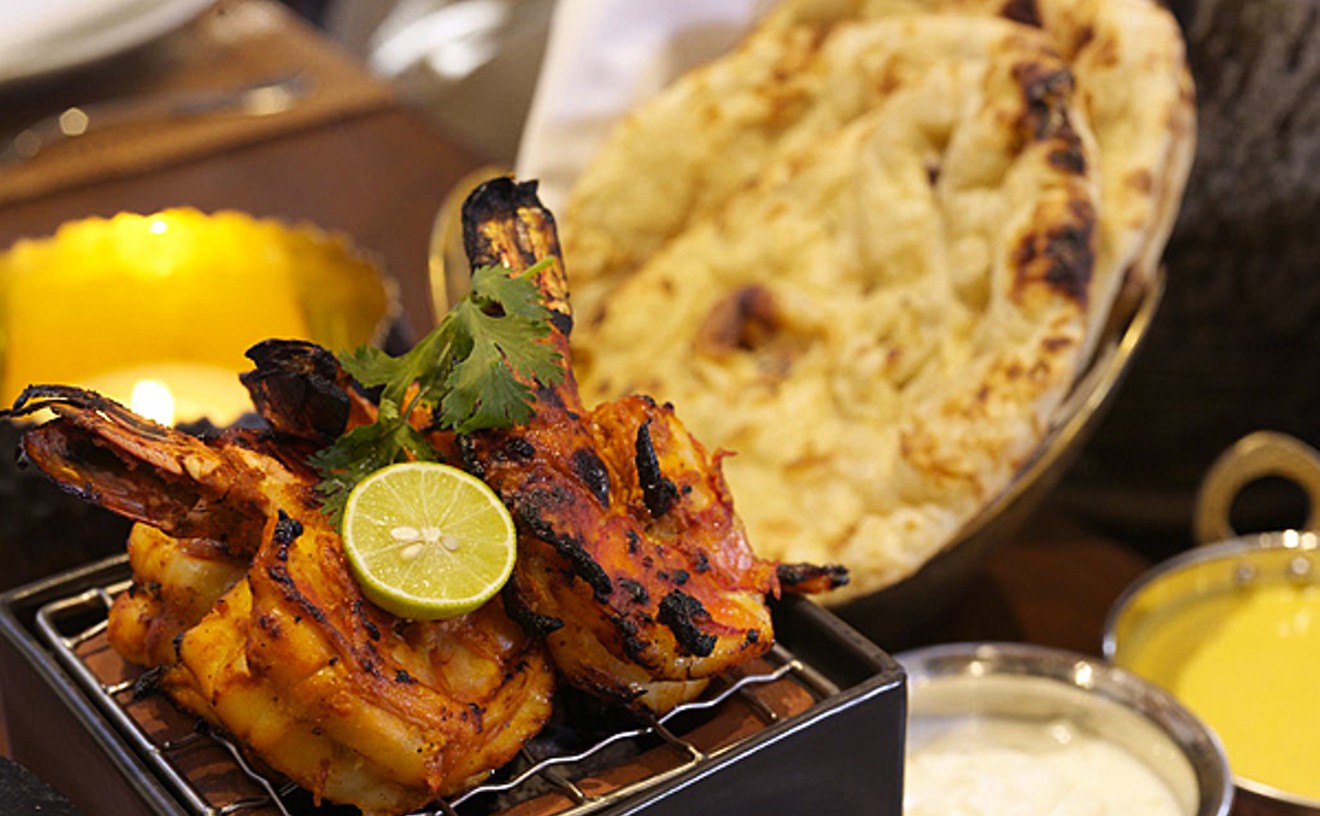 The Restaurant at the Setai is where you go when you want to impress a date. Start at the hotel's bar for the signature chili passion martini, made with passionfruit purée and topped with chili flakes ($18). Then sit down to dinner in the exquisite dining room, where servers will dote on you. A stool for the lady's purse? Of course. A suggestion about wine from the sommelier? Easy. An anniversary celebration that needs some champagne or a special confection at the end of the meal? They will take care of it. The service at the Setai is spot-on but subtle. Your needs are anticipated without fanfare. Water glasses are filled, and dietary restrictions (gluten-free, ovo-lacto vegetarians, we're talking to you) are handled with grace. After you're finished with your meal, don't be surprised if your server offers a tour of the courtyard and grounds. That's just how it's done in this ultra-sophisticated paradise.

Miami is seriously lacking fresh, delicious doughnuts, but that wasn't always the case. In 1947, a man named Jim Hadler had a vision that the world (the Magic City, specifically) could use a good doughnut and set about making one. Almost immediately, people were smitten with the warm glazed pastries. For about 50 years, multiple generations of Miamians heartily ate Velvet Crème doughnuts. Then, in 2000, an illness in the family led to the closing of the neat retro red-and-white-striped shops, and the city fell into what is known as "the end of doughnut times." But you can't keep a good pastry down. Velvet Crème has been revived by Krista Rios and her family. While Rios works on opening a brick-and-mortar shop, possibly in Coral Gables, the Velvet Crème food truck circles town, selling powdered, cream-filled, cake, and glazed doughnuts, as well as the signature round John, a cream-filled, chocolate-frosted number. Each doughnut costs about a dollar, which itself is something of a miracle (when was the last time a buck bought you anything)? To find out where the truck will be next, follow it on Instagram (@VelvetCremeDoughnuts) or Facebook (facebook.com/VelvetCremeDoughnuts). 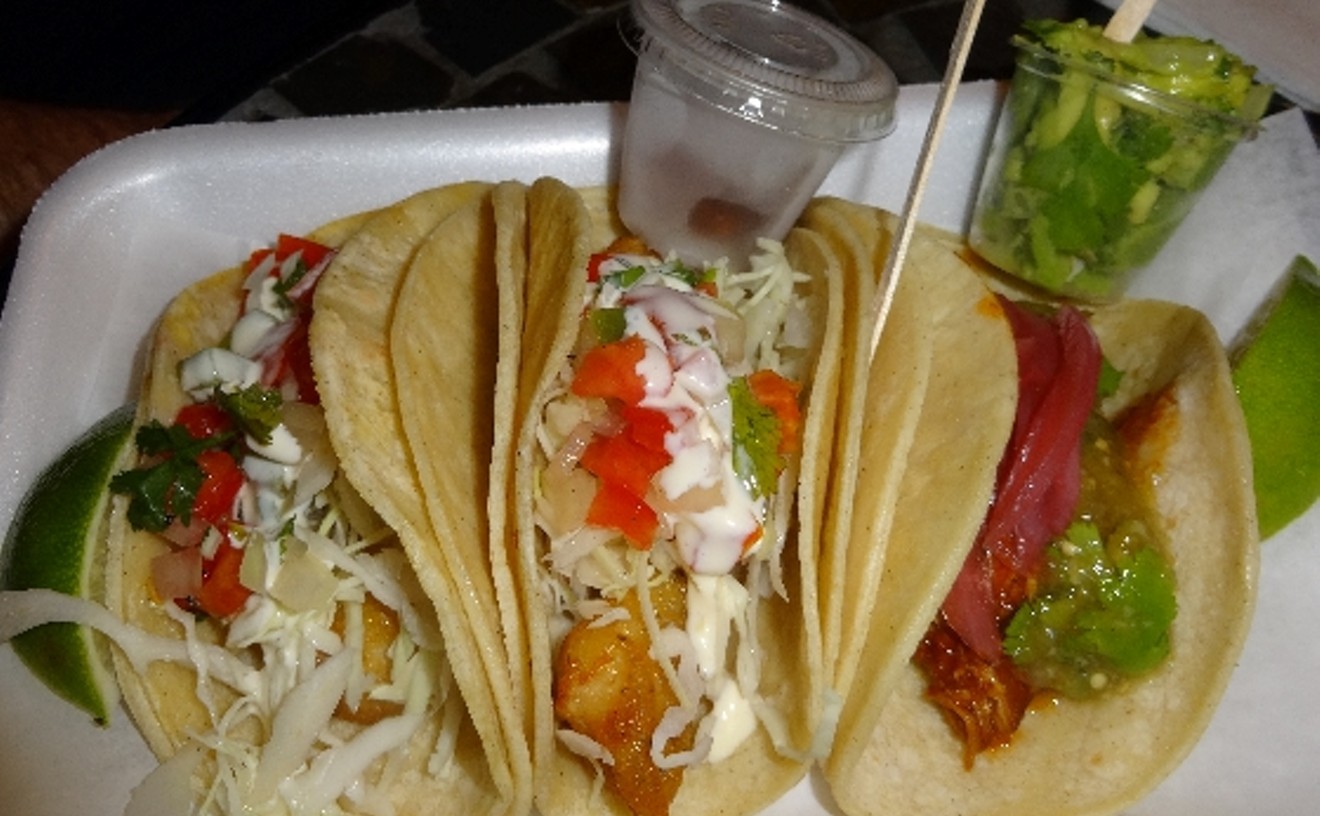 The movie Chef, starring and directed by Jon Favreau, was inspired by the real-life Miami food truck Jefe's Original Fish Taco & Burgers. For years, this truck served the best fish tacos ($2.35) in Miami. They were Ensenada-style, meaning the fish was fried with crisp beer batter and topped with pico de gallo, crema, and cabbage on soft flour tortillas with a squeeze of lime. Now, at the Soul Shack in North Miami, you can get these tacos whenever the craving hits — no need to chase the truck or stalk its Twitter feed. What's better? You get an expanded menu with sandwiches, salads, beers, and wines. You also can dine in or take out. It's a restaurant you want to root for — for real! 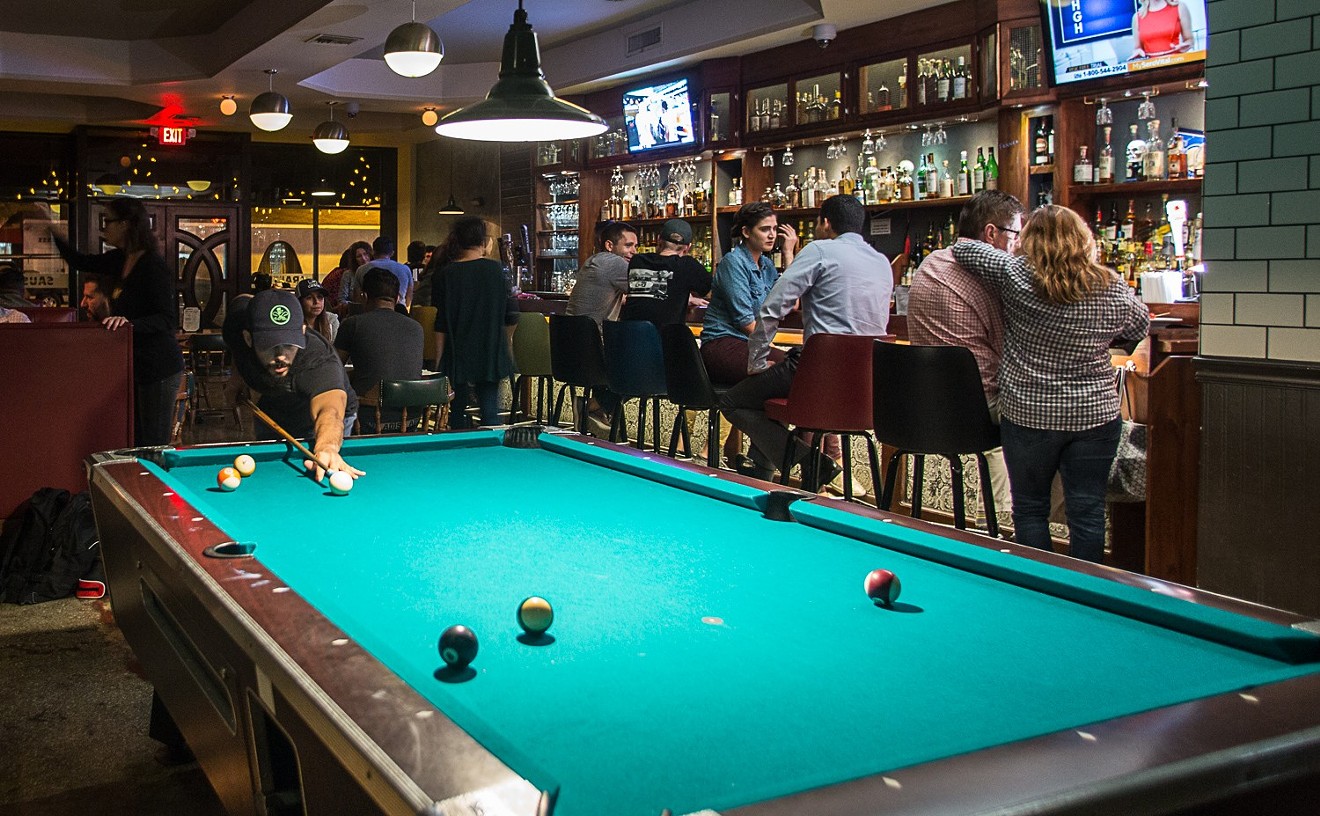 Photo courtesy of the Mighty

"Excuse me. Do you have Brussels sprouts?" No. "How about some truffle mac 'n' cheese?" Sorry. "Maybe charred shishito peppers?" Not here. The Mighty is a real gastropub — the kind of dark, welcoming place you want to relax in and pore over a good beer list. When you get hungry, turn your attention to the house-made sausages featuring duck ($13), free-range rabbit ($15), and lamb ($12). You'd also be remiss if you didn't take advantage of the rotating list of house charcuterie. While other places phone it in, the Mighty cures beef filets and pork loins. It salts Russian pastrami, duck pâté, and cantimpalo. You never know what you might find, but the guarantee is it'll be hard not to order it all. 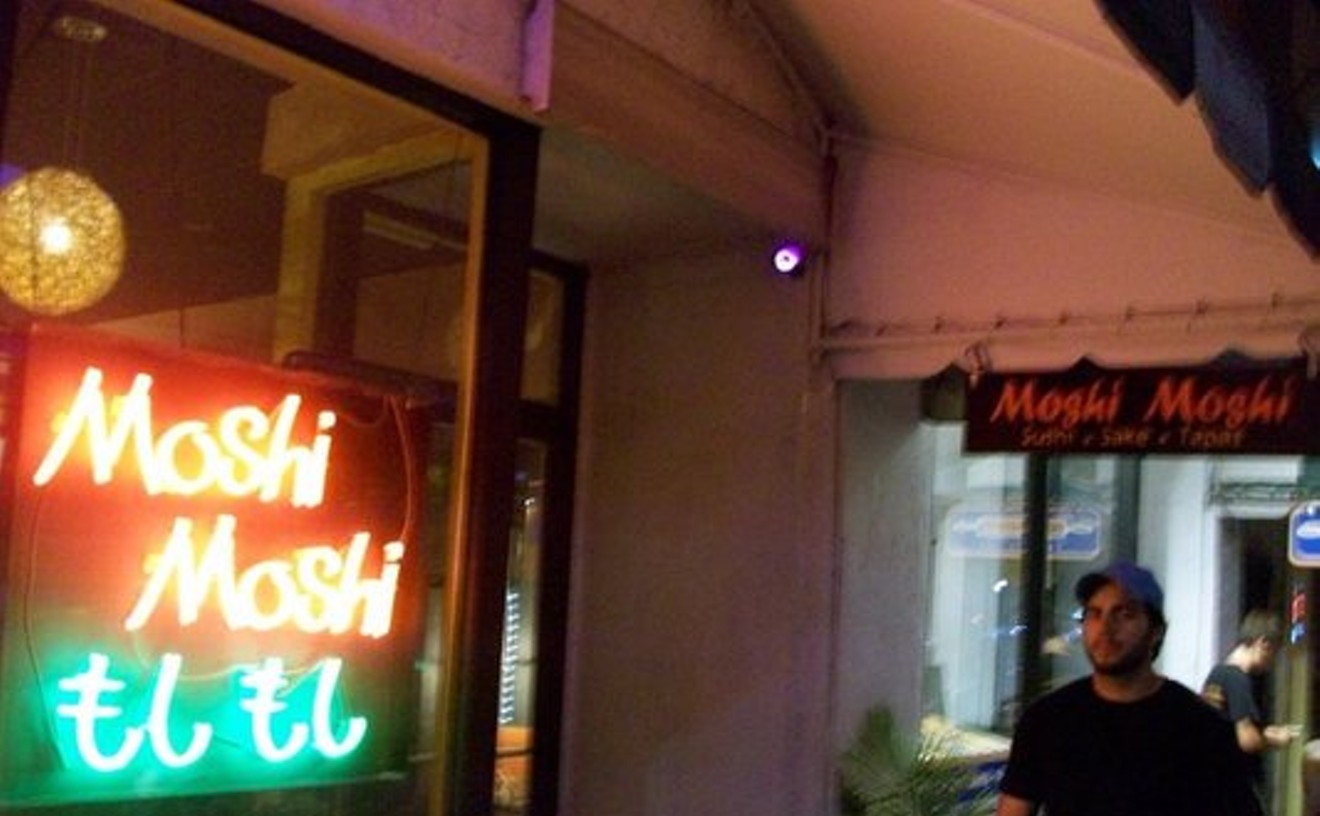 It's 3 a.m. Do you know what your next delicious meal will be? Your wasted buddies are pushing for something fried and filthy from whatever wretched fast-food joint your Uber driver passes next. But you know better. You're going to Moshi Moshi. Open until 5 a.m., the sushi and Japanese joint serves award-winning rolls alongside ramen bowls and rice dishes guaranteed to stop that sloshy feeling in your belly. Your fried-food-fiending friends won't be disappointed either, with a menu featuring a variety of dishes like chicken kara age ($8), tempura everything, and the Rock N Roll ($14), a fried sushi roll packed with crab and topped with avocado and roe. (Yes, of course you want extra eel sauce with that.) Not quite ready to sober up? Moshi Moshi serves beer and hot sake if you're slumming it and more than 20 other sake varieties if you want to spend a little extra on the good stuff. And with locations in South Beach and on Biscayne Boulevard, there's a good chance you'll pass it on your way home anyway. (But if you're likely to drunkenly embarrass yourself, do it at the relatively uncrowded MiMo spot. No one will notice besides the waitstaff, and those women know how to keep a secret.)

Under the Mango Tree 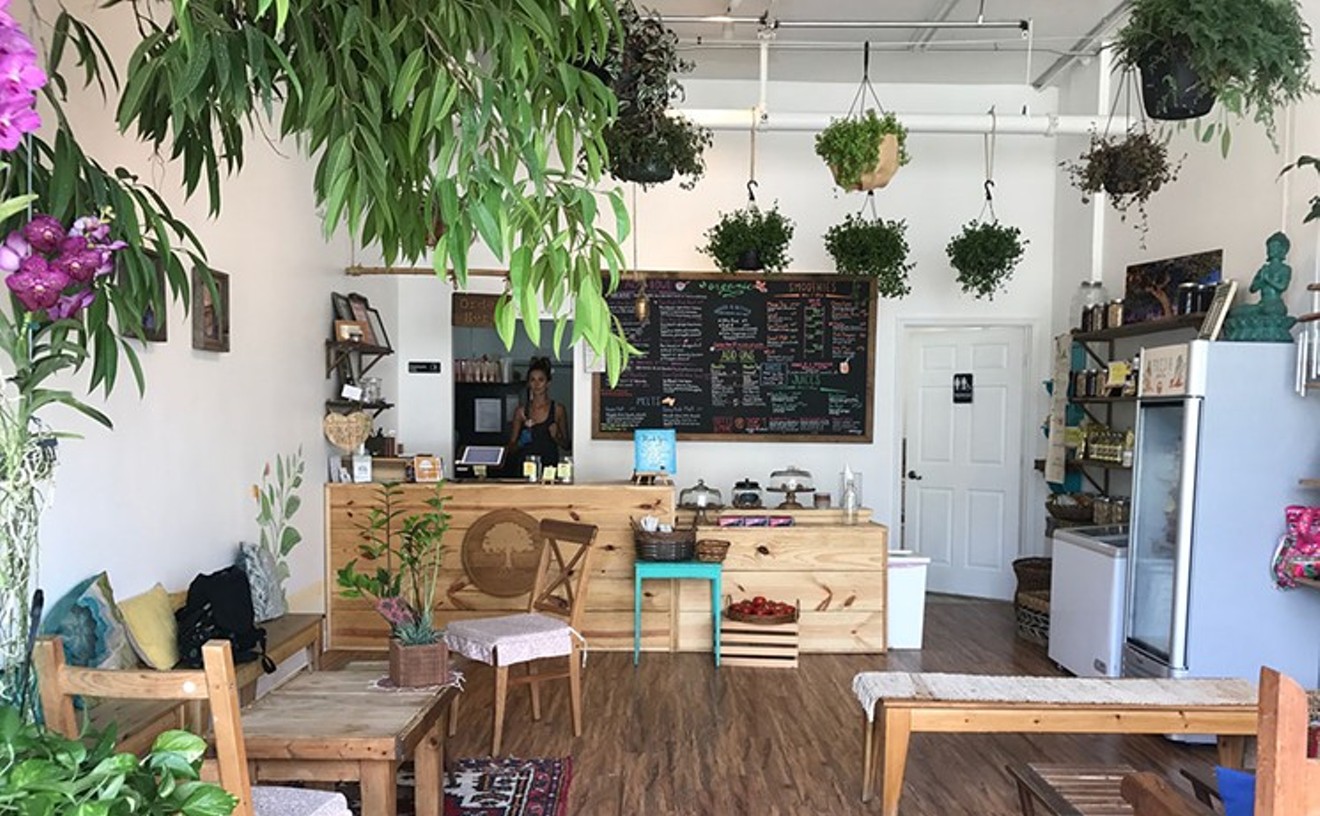 You woke up hugging the toilet and grasping your liver. Only one thing can bring you back to life, and it's not a greasy burger with fries. No, you need something nutritious, organic, and peanut-buttery (hey, it's protein). Enter Under the Mango Tree, a holistic gem straight out of The Jungle Book in the heart of South Beach. It serves 100 percent raw, fresh, and organic juices, smoothies, and açaí bowls. The last will be your saving grace, specifically the Marley bowl: raw açaí blended with banana, almond milk, spinach, and peanut butter. The magical elixir is topped with sliced banana, berries, and shaved coconut. It's no hair of the dog, but the last thing you need after swigging a bottle of vodka is a bloody alcoholic anything. And priced at $9.50 for a small or $12.75 for an XL, it beats any other morning-after antidote out there.

Anyone who has attempted a three-day juice cleanse and failed miserably after just eight hours has surely never tried My Raw Juice. The online-only (for now) local company delivers raw and organic juice cleanses you'll actually look forward to. For $69 per day (or $198 for three days), you get six Mason jars filled to the brim with four pounds of liquefied fruits and veggies and no water — just pure, unpasteurized liquid goodness. For the first time ever, you might find yourself hankering for juice rather than food. You won't miss the act of masticating at all. Heck, you'll feel as though you're eating a bag of carrots or a handful of beets when you drink this stuff. But not all cravings will be forgotten: The nightcap nut milk — made with raw cashews, agave, alkaline H2O, sea salt, cinnamon, and love (the most important ingredient) — will leave you wanting more where that came from.