Not quite classifiable as hip-hop, rock, or pop, Twelve'Len's Zach Fogarty, Vares Joseph, and John Falco insist, "We're creating our own genre." With four collections of carefully crafted, stylistically nuanced cuts, this threesome is exploring the kind of heady future tuneage that blends all of Miami's essential yet disparate music scenes into a single mercurial sound. On Yellow, their debut EP release, Fogarty, Joseph, and Falco experimented with indie pop and alternative rock while still taking the occasional side trip into hip-hop. Next, they turned Blue, venturing into moody electronica. And then, for Silver, they transitioned toward soulfully ambient singer-songwriter stuff, shapeshifting again. Now the Twelve'Len guys are prepping their latest effort, Pink, and it is a refined, streamlined take on their so-often sprawling aesthetic. Track to track, verse to verse, Fogarty, Joseph, and Falco cross-fade between hip-hop, rock, pop, dance, soul, R&B, and the multitudinous other sonic shades of Yellow, Blue, and Silver to finally achieve the synesthetic vision they've been chasing since professing to be "a different kind of indie band for the Miami scene."

Bass, booty, house music, Spanglish phone sex, and Calle Ocho motel hookups. Those are just some of the archetypal aspects of life in the 305 — from its streets to its clubs to its darkest pay-by-the-hour rooms — that inspire Little Havana's own Jesse Perez to bump dirty beats till each and every ass is bouncin' from la esquina to the VIP. As a Dade County dude who grew up on Miami bass and homegrown house, he is the heir to Uncle Luke and DJ Laz, Oscar G and Ralph Falcon. Commanding a flawless feel for definitive South Florida party sounds and a deliriously NSFW sense of humor, Perez makes brainy hump music that could come only from Miami, with track titles like "Hialeah Chongita," "Bukkake Challenge," and "Still Slangin' That D." He's nasty. He's shameless. He's hilarious. And his debut full-length slab, 2014's Kama Sucia, is a 305 masterpiece made for bumpin', grindin', and sippin' warm rum in an Executive Fantasy Hotel bed that hasn't been made for two days.

Video may well have killed the radio star, but Shake 108 FM is bringing that music back to life one killer track at a time. The nonprofit radio station launched last year thanks to the 2010 Local Community Radio Act, which gives small-time radio operators a shot at starting their own community-based station. Local music junkie Peter Stebbins had plotted everything from going pirate radio to opening a station in Bimini with a giant antenna before the new law gave him a legal — and more realistic — shot at radio glory. With only three available frequencies in the Magic City at the time, the chances for a newbie like Stebbins launching his own radio station were slim. But the man shakin' things up in Miami got lucky. And now the rest of the city finally has a musically tasteful radio station that not only leaves the Taylor Swifts, Sam Smiths, and Meghan Trainors of the world to Y-100 but that supports the local community. More so, local music. With tunes that range from Miami's Suénalo to Jack Johnson to Daft Punk, Shake 108 lives up to its mission: "to provide a wide variety of music that makes you wanna shake your booty!" 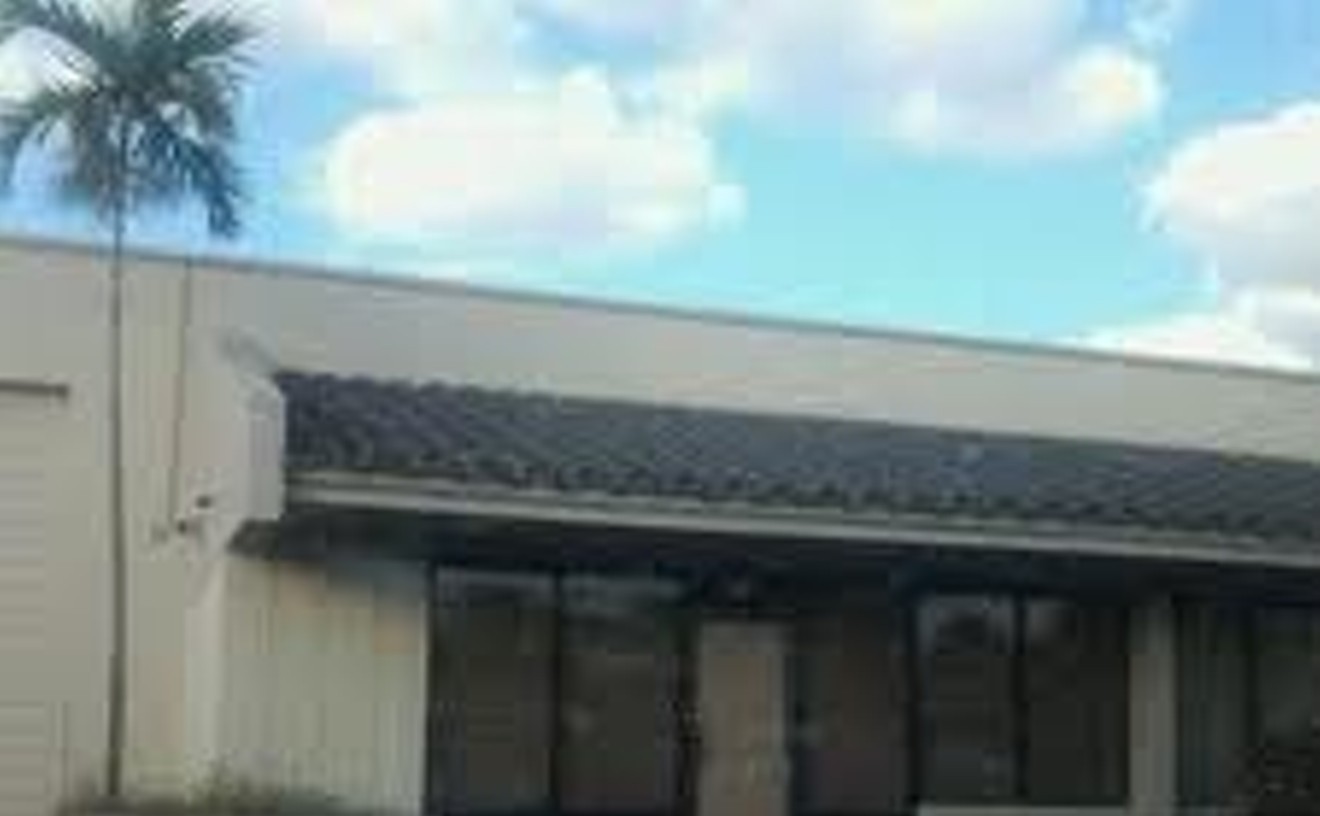 Experience, technology, and a legacy of amazing production: Those are the rock-solid foundations of the Studio Center in Miami Lakes. After all, the studio has been helping musicians on a local, national, and international scale get their dreams out of their heads and onto the master tape for more than 30 years. In that time, it has earned eight Grammy Awards for its work with artists including Shakira and Ricky Martin. It's got an award-winning video-production studio too whose work you may recall on hit shows like Flipper and Smokey and the Bandit. Whatever kind of groove you want to lay down, Studio Center's got state-of-the-art equipment tailored to your sound, from hip-hop to rock, pop, Latin, folk, jazz, and punk. These storied halls have graced the world with LPs from everyone from Kool & the Gang to Ginuwine to the Game. Even Scott Storch and Madonna laid down some vinyl magic in Miami Lakes. With four studio options packing multiple rooms and vocal booths, who knows what you'll cook up in here? You can't make that solid-gold hit unless you put in the work.

DIY will never die. Especially if outfits like Miami's Limited Fanfare Records continue to crank out kick-ass independent music on vinyl, cassette, CD, and digital formats. Launched in 2011, this local label, run by band manager and music-industry veteran Brian Kurtz, has released dozens of albums, EPs, compilations, and singles by both national and local acts, from Los Angeles garage rockers the Ettes and Nashville's Denney and the Jets to Miami rock bands Ex Norwegian and Lil Daggers. The imprint was initially funded by selling off Kurtz's beloved record collection. And though the operation has since achieved fiscal balance through the increasingly dicey business of music sales, the boss' decision to cash in his most treasured worldly possessions in pursuit of a dream job is an obvious sign of how deeply and personally invested he, the bands, and the rest of the crew have been since the beginning of this collective endeavor. "Limited Fanfare is all about putting out quality music," Kurtz says. "Not money. Not hype." Sure, there aren't any louche, syphilitic bohemians slumped over the bar while sucking on absinthe-soaked sugar cubes. But still, Le Chat Noir in downtown Miami oozes a certain kind of 1910s Parisian chic, with its art nouveau design flourishes and dim, dark air of decadent sophistication. As for the musical entertainment, the denizens of this South Miami Avenue salon, just like the French hipsters of the early 20th Century, prefer jazz — whether era-appropriate Dixieland stuff or bebop, cool, Latin, acid, and trip-hop, among other styles. So twist your mustache, adjust your bustier, cross your legs like un artiste, order a sandwich Lorraine avec salade, and polish off that bottle of Clot d'Ivern Valencia Brut while brooding over your petty bourgeois problems, cursing la stupidité de l'homme, or contemplating eternal existential conundrums to the bruit magnifique of the Magic City's most skilled players, from Felipe Lamoglia, Silvano Monasterios, and Tony Madruga to Rose Max & Ramatis, as they jam downstairs in the cellar. 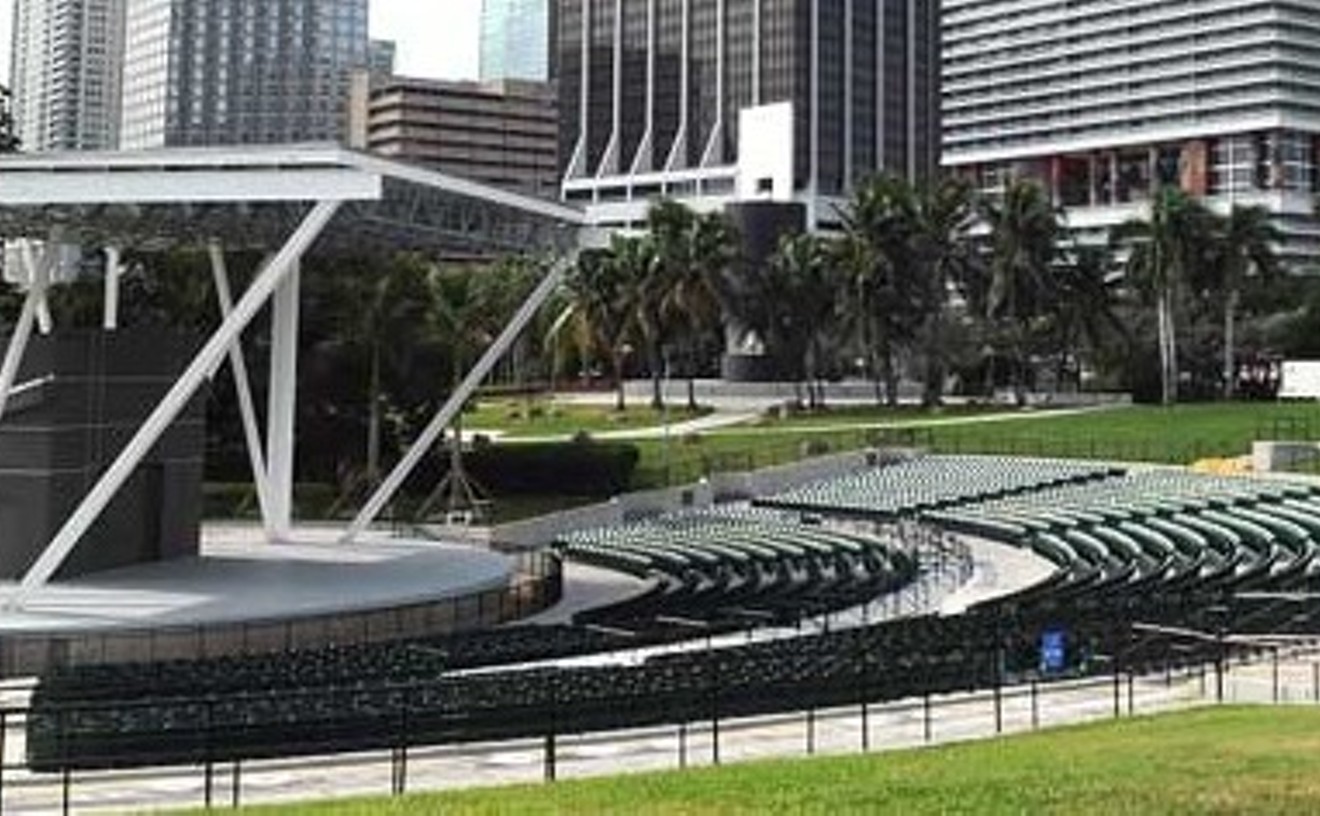 Under the Miami night sky, the Biscayne breeze is blowing. The decibels are booming. Whether it's Ultra Music Festival, Nicki Minaj, or Marilyn Manson, there is almost no concert experience that isn't made better by being staged at Bayfront Park Amphitheatre. Among the Magic City's only permanent outdoor performance grounds, this 2,600-seat, 8,000-person music venue lends a heightened intensity and inimitable sense of place to any show, especially after sunset, when the heat eases, the moonlight flickers across Biscayne's dark waters, and the downtown Miami skyline looms, shiny yet shadowy, like a jagged black mirror reflecting pyrotechnics, flashing lights, and fireworks. It's a shame the waterside setting has been underused for so many years, with only a few major spectacles per 12 months. But now that Live Nation has recently rebooted Bayfront Park Amphitheatre, we don't have to wait six months between open-air concerts. And, yes, the music will flow even during hurricane season. The amphitheater's official year-round policy: "Rain or shine."

Miami's party veterans are well familiar with the hallowed space at NE 14th Street and Miami Court. For years, it reigned as nightlife favorite Vagabond, and lately, Steam has been packin' 'em in. Every Monday through Saturday, Steam turns up the heat and the volume for the best and brightest of the underground dance and hip-hop world. Regular parties like We Lit Wednesdays and PUSH Fridays make it a safe bet that some rowdy trouble is going down inside, often featuring international names passing through South Florida. But the real beauty of Steam is its support for local DJs, MCs, and all-around talent. Local musicians are always opening and closing the party or headlining the whole affair. Out back, Steam upped its game earlier this year with Lot 14 — a shipping container turned outdoor concert venue often married with delicious homemade barbecue for sale. 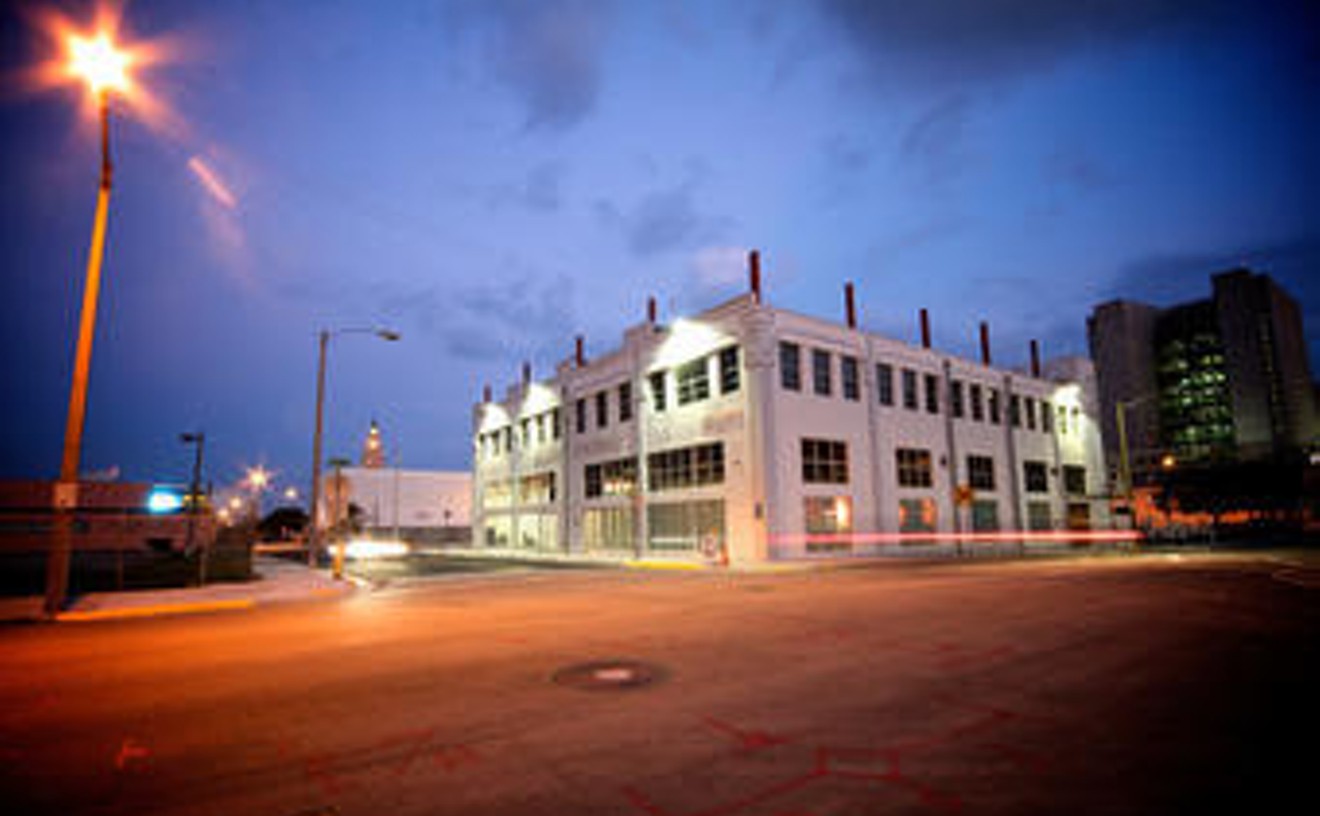 Rarely do we see a live performance that leaves us in awe. And rarely do we expect that performance to be at a smaller, midsized venue. But New York duo Phantogram managed to do all that with so little. While they ripped through hits like "Mouthful of Diamonds," "Howling at the Moon," and "Bill Murray" at Grand Central last June, they kept the crowd screaming and singing along the entire time. The music was sublime, and the band combined the 15-song set with a light show that was so simple and yet so effective in setting the tone for the performance, which climaxed during "Bill Murray" while singer Sarah Barthel wrapped herself in gold sequins to become a human disco ball. Phantogram's show proved you don't have be Lady Gaga or Beyoncé to put on a spectacle fans will never forget.