Miami's diverse selection of art houses has turned thousands of viewers on to the indie film experience in recent years. But perhaps no theater is as adept at getting audiences to eat their small-release vegetables — which are delicious, of course, if you'll only give them a taste — as the Bill Cosford Cinema at the University of Miami. The auditorium-style space has a legion of film-buff supporters, sure. But it also draws more casual theatergoers through buzzworthy wide releases such as American Sniper and The Interview. Once they're in the door, those viewers are then exposed to a world of film options they've never encountered at the cineplex: foreign features, U.S.-made independent films, and movies that rack up awards on the film festival circuit but never quite reach the national consciousness. The frat bros and party girls of UM may not be converted immediately into miniature Pauline Kaels, but hey, every bit helps. 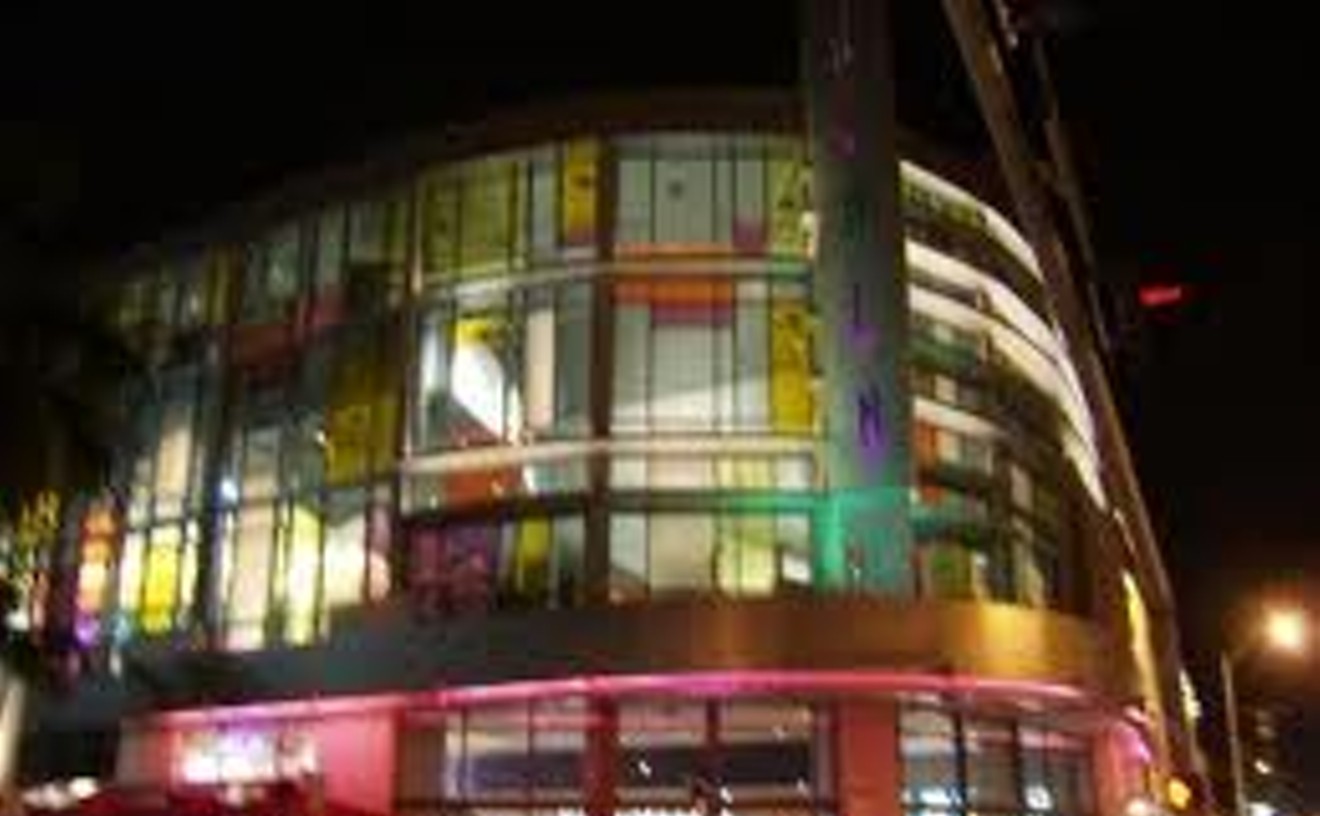 Where in Miami can you pull a double feature, watching the latest Marvel blockbuster and subtitled foreign film back to back? And what's the only major movie theater that serves both Miami Beach and Miami? Don't worry — they're not trick questions designed to ruin your chances at this month's local pub quiz. The answer is simple, actually: Regal South Beach Stadium 18, at the west end of Lincoln Road Mall. As things to do get increasingly expensive in South Beach, Regal remains a true constant that for $12.50, you can still catch major Hollywood productions, indie releases, and soon-to-be arthouse classics. Regal also has plenty of amenities, including 3D capabilities, IMAX, and digital projection — though Hollywood is still debating whether the last is actually an improvement. Don't tell Tarantino!

Born in Guatemala and raised in Miami, Oscar Isaac is the movie star the Magic City has been waiting for. Early in his career, Isaac had a few turns on television, and like seemingly every aspiring actor, he did an episode of Law and Order. But it was his stunning, soulful turn as the title character in the Coen Brothers' Inside Llewyn Davis that earned Isaac bona fide star status. Set in 1960s Greenwich Village, Inside Llewyn Davis tells the story of a struggling folk singer. Davis is deeply unlikable — selfish, self-centered, and rude — but in the hands of Isaac, he's a layered character whose flaws make him human. It's not surprising that Isaac was nominated for a Golden Globe for his nuanced portrayal. Isaac followed up his star-making turn with A Most Violent Year, proving he has a knack for complex roles. But if his first notable films were all about establishing his acting cred, the next are about turning the actor into a marquee name. Next up for Isaac are three big-budget action flicks. He's set to star as X-wing pilot Poe Dameron in Star Wars: The Force Awakens and the currently untitled Star Wars: Episode VIII. Isaac will also join another powerful franchise when he plays a villain in 2016's X-Men: Apocalypse. Whatever Isaac is up to next, we'll be watching. Frankly, we can't keep our eyes off him. Call us, Oscar!

What's a high-profile chef to do when he flames out on the West Coast? Return to his Miami roots and rediscover the food he loves. That's the premise of Chef, Jon Favreau's 2014 film that shows off both sides of Miami — the high-end resorts and beaches where tourists flock, and the cozy mainland haunts where locals gather. Chef Casper's food truck (played by real-life Miami food truck Jefe's Original Fish Taco and Burger) makes stops in front of the Fontainebleau and along Ocean Drive, serving up Cuban sandwiches to the swarming masses. But the chef really gets his groove back at Little Havana nightclub Hoy Como Ayer, alongside Sofia Vergara shimmying to its house Cuban band. Casper ultimately leaves Miami to embark on a cross-country road trip with his food truck to return to Los Angeles to prove himself. But he brings Miami's food along with him for the ride, telling audiences worldwide what South Florida locals have known for decades: Can't nobody resist a fresh-pressed cubano.

If you've never seen an episode of Jane the Virgin, it might be easy to write the show off. Airing on the CW, it's an adaptation of a Venezuelan telenovela that tells the story of an optimistic, religious Latina living in Miami who — oops! — is accidentally artificially inseminated during a routine gynecological exam. But once you've swallowed the show's ridiculous premise, you're free to enjoy the things that make it truly great entertainment. Its charming cast of characters ranges from the down-to-earth and relatable, like Jane herself, to the wonderfully wacky, like her biological father Rogelio, a self-centered telenovela star. Its unique storytelling style uses onscreen text and voice-over narration unlike anything else on television. And most important, especially for Miami audiences, it's a respectful portrayal of Hispanic culture. "[Jane the Virgin] represents a culture that wants to see themselves as heroes," star Gina Rodriguez explained in her emotional Emmy Award acceptance speech. Beneath the show's over-the-top exterior lies a unique, exciting, and complex world packed with plenty of heart — like Miami itself.

The Book of Mormon

Miami's Adrienne Arsht Center was graced by a slew of impressive traveling Broadway hits this season, from Wicked to Sister Act and Newsies, but none was as raucously, purely entertaining as The Book of Mormon, a religious satire created by the guys behind South Park. Though the musical's overarching story chronicled the experience of a pair of missionaries spreading the good news in a war-stricken Uganda, it managed to make light of some very questionable themes, from baby rape to genital mutilation and AIDS, with enough profanity to offend even the raunchiest of potty-mouthed Miamians. But all of that four-letter magic came packaged within enough musical stylings to earn the show nine Grammys in its original NYC run. While touring companies often pale in comparison to the Broadway original, Miami didn't see any appreciable drop-off. David Larsen as the slowly unraveling Elder Price gave as compelling a portrayal as it was knee-slappingly hilarious.

Playwrights, directors, and actors spend countless hours researching, writing, rewriting, memorizing, staging, and emotionally preparing for work that strives for perfection. With so many variables in play, perfection is seldom realized, as most theater professionals will admit. But when it is, audiences are left breathless and shaken, reaching for handkerchiefs and superlatives to describe an experience that words can't do justice. That was the case with Mothers and Sons, the crown jewel of GableStage's season. Set around a surprise visit from a gay widow's mother-in-law, who still hasn't accepted her son's passing from AIDS, Terrence McNally's play exhibited a profound understanding of gay-straight relations in the 21st Century, riding rapidly shifting tides with an empathetic eye for those left behind. Angie Radosh's performance humanized intolerance with the truth and complexity of a master craftsman; Michael McKeever channeled the soul of the modern gay man with both patience and quivering, righteous indignation; and Jeremiah Musgrove flawlessly embodied McKeever's younger boyfriend, representing a healthy generation removed from Stonewall. Director Joseph Adler put all the pieces together for an unforgettable, mind-opening work of art.

As a creative mantra, "write what you know" doesn't always work: It can result in myopic self-absorption as much as personalized insight. But Third Trinity, the new solo show from Miami wunderkind Teo Castellanos, cemented the value of autobiographical writing in its spartan production at the Light Box at Goldman Warehouse. His frequent partner in the theater of the avant-garde, Tarell Alvin McCraney, directed Castellanos, though it felt like he was directing a bustling ensemble: Castellanos played 23 characters, ranging from himself and his two brothers to petty drug dealers, priests, junkies, and his own grandmother, in a therapeutic and adventurous journey spanning three decades. Local audiences connected with the show's excursions into Cocaine Cowboys territory — the script, with its Goodfellas-like Mob menace, was originally penned as a screenplay — not to mention the vintage Dade County images projected onstage and the cauldron of South Floridian dialects Castellanos combined. The show could easily play elsewhere in the country, but it will always be ours.

This year really did bring a new theater to the New Theatre, as the longtime Miami company completed its first full season in the breathtaking South Miami-Dade Cultural Arts Center. The modern, multivenue structure, with its topnotch lighting and sound grid, has been a veritable godsend for a company that had been gypsying around lesser, temporary venues for years. Moreover, for the first time in many seasons, artistic director Ricky J. Martinez selected a group of plays that was powerful and cohesive, which included familiar classics and world premieres that nonetheless seemed to converse with one another. A theme of intolerance connected powerful works such as The Cuban Spring, Vanessa Garcia's exploration of the generational divide of Cubans and Cuban-Americans; The Gospel According to Jerry, a two-hander about the unlikely relationship between a rabbi and a gospel singer; Twelve Angry Men, a production that still found new avenues to explore in this vintage drama; and Women Playing Hamlet, which took a comic look at gender bias through the prism of classical acting. There wasn't a clunker among them, with Martinez's directorial work never seeming so consistently accomplished.

David Arisco was the driving force behind Murder Ballad, a killer off-Broadway musical at Actors' Playhouse, and that alone is enough to earn him this award. He doubled as the show's immaculate choreographer, placing people in carnal couplings and tragic duels atop bars and pool tables and even among the audience itself. His vision captured both the excitement and melancholy of the source material, and it set a new benchmark for immersive South Florida theater. His successful track record as a virtuoso director of musicals carried over to other Actors' Playhouse shows this season as well: His outsize vision brought the Zeitgeist-capturing period musical Ragtime to vivid life, juggling a cast of more than 40 professional actors in the company's largest undertaking ever. Nothing was lost in translation except for a portion of the song lyrics — victims of a sound grid in disrepair. Arisco promptly fixed this issue with a digital soundboard for his next effort, First Date, a mediocre if relatable musical about the awkward pairing of two young singles. His immaculate direction emphasized the humor and humanity of the words and lyrics, polishing an average stone into something like a diamond.