In a league of coddled superstars and guys riding seven-figure salaries since they were teenagers, Hassan Whiteside is the rare star-in-the-making who actually earned it. After a year at Marshall University, Whiteside played for the Sioux Falls Skyforce, the Rio Grande Valley Vipers, the Iowa Energy, the Sichuan Blue Whales in China, and Al Mouttahed Tripoli of the Lebanese Basketball League. But in 2015, perhaps the bleakest year in Miami Heat history, Whiteside took his chance in the NBA by pulling down rebounds as if they were lemons hanging on a tree and blocking shots as if he were swatting mosquitoes. Once, he dunked so hard his hand required multiple stitches. Another time, he put up numbers on the boards and from the field that the Heat has never seen, not even in the days of Shaquille O'Neal. This past February 4, he totaled 24 points on 12-of-13 shooting while pulling down 20 rebounds. He's the heart of the next-generation Heat, and he's probably not headed back to Lebanon anytime soon.

For the past decade, Marlins fans have known that only three things in life are certain: death, taxes, and October disappointment. Between periodic spending sprees and corresponding fire sales, it's been a long roller-coaster ride with a team that's less reliable than Randy Choate's fastball. In the end, we can expect only heartbreak. Until now, that is. One man has taken on the challenge of saving the Marlins organization from itself. Major League Baseball's $325 million man, Giancarlo Stanton signed the largest contract in the history of North American professional sports last November — making Stanton the face of the Marlins for the next 13 years. In signing that contract, the superstar worked to convince ownership that he needed the teammates to back him. The Marlins followed that up with new additions and aimed to build a winner. After sitting out the final weeks of last season when he got nailed in the face with a heater, a recovered Stanton has returned in 2015 with fire in his toned abs. If Stanton can bring this team back to the promised land of the postseason, Jeff Conine might have to give up his title of Mr. Marlin.

Coming into the season, the expectations weren't exactly low for Aaron Ekblad. After all, the now-19-year-old defenseman had been taken by the Panthers as the first overall pick in the NHL Draft last summer. But not even those savvy Sunrise scouts could have predicted a breakout year quite like this: In his first season removed from junior hockey, the powerful young Canadian was arguably the Cats' most valuable player. He was the team's top-scoring defenseman and one of its top scorers overall. He was the Panthers' plus-minus leader, a stat that tracks goal differential while a player is on the ice. He earned that title while also topping the squad in playing time. Despite his youth, his teammates already praise him as a leader, and his physical, cerebral performance was a major factor behind the Panthers' first serious playoff push in three years (even if they did come up short). It also earned Ekblad a spot in the All-Star Game, not to mention a place in the conversation for the league's coveted most outstanding rookie award. For a precocious teenager from small-town Ontario, does it get any better than this?

Brad Kaaya is so flya he sets the Hurricanes on fiyah. The rhymes never end, and the puns — oh, the Kaaya puns — don't even get us started. But the only reason we're all having so much damn fun with the Canes quarterback's name is because, as a true freshman, Kaaya showed the nation last season that he's the real deal. Between leading the Atlantic Coastal Conference in passing touchdowns (26) and finishing second in yards (3,198), Kaaya earned his title as ACC Rookie of the Year. Now, with running back Duke Johnson drafted into the NFL, alongside the rest of the Canes' standout seniors, Kaaya will return as the inevitable leader of the Miami Hurricanes football team. Older teammates say they're ready to listen to what Kaaya has to say in the huddle because he's earned the right to take on this leadership role. Let's hope we'll be saying "Hi, Felicia" (thanks to his mom, Angela Means Kaaya, who played that character in the movie Friday) for many seasons to come.

Yoel Romero already had three Olympic medals in freestyle wrestling (one silver and two bronze) before he decided to make the switch to MMA fighting in 2009. But it's not like Romero wasn't familiar with gut-wrenchingly tough choices. Two years earlier, the star athlete abandoned his life in Havana to flee for Florida after defecting during a match in Germany. Both decisions have turned out to be profitable moves. He's ranked sixth in the official Ultimate Championship Fighting's middleweight rankings. Not too bad for a guy who's 38 years old — an age that, by MMA standards, practically makes him retirement eligible. In his five years as an MMA fighter, Romero has knocked out his share of top-flight competitors, including Clifford Starks and Ronny Markes. His surprisingly strong punches and elbows, combined with his religious faith, quickly earned him the nickname Soldier of God. Romero will likely take some time away from MMA in the next few months — in an April match, the Soldier of God tore knee ligaments. But he is sure to find his way back into the ring, where arm-triangle choke submissions, D'Arce chokeholds, and banana splits await him.

Virginia Key Beach Park is the anti-South Beach. There are neither hundreds of sexy bodies nor blaring nightclubs. There's not even a huge expanse of sand. There are, though, some of the best ocean and bay views anywhere. This is a surprisingly tranquil space for barbecues, social gatherings, and an abundance of watersports like kayaking and paddleboarding. Add in a resurgent natural landscape, with lush native trees and wildlife like sea turtles and warblers; great hideaway walking and bike trails; and a carousel and minitrain for the kids. There's even historical significance: During segregation, the park attracted visitors from all over the country as the first Miami-area beach designated for use by African-Americans. The next time you have a free afternoon and are looking to get away, head to Virginia Key. It's a vacation from Miami — just ten minutes from downtown. 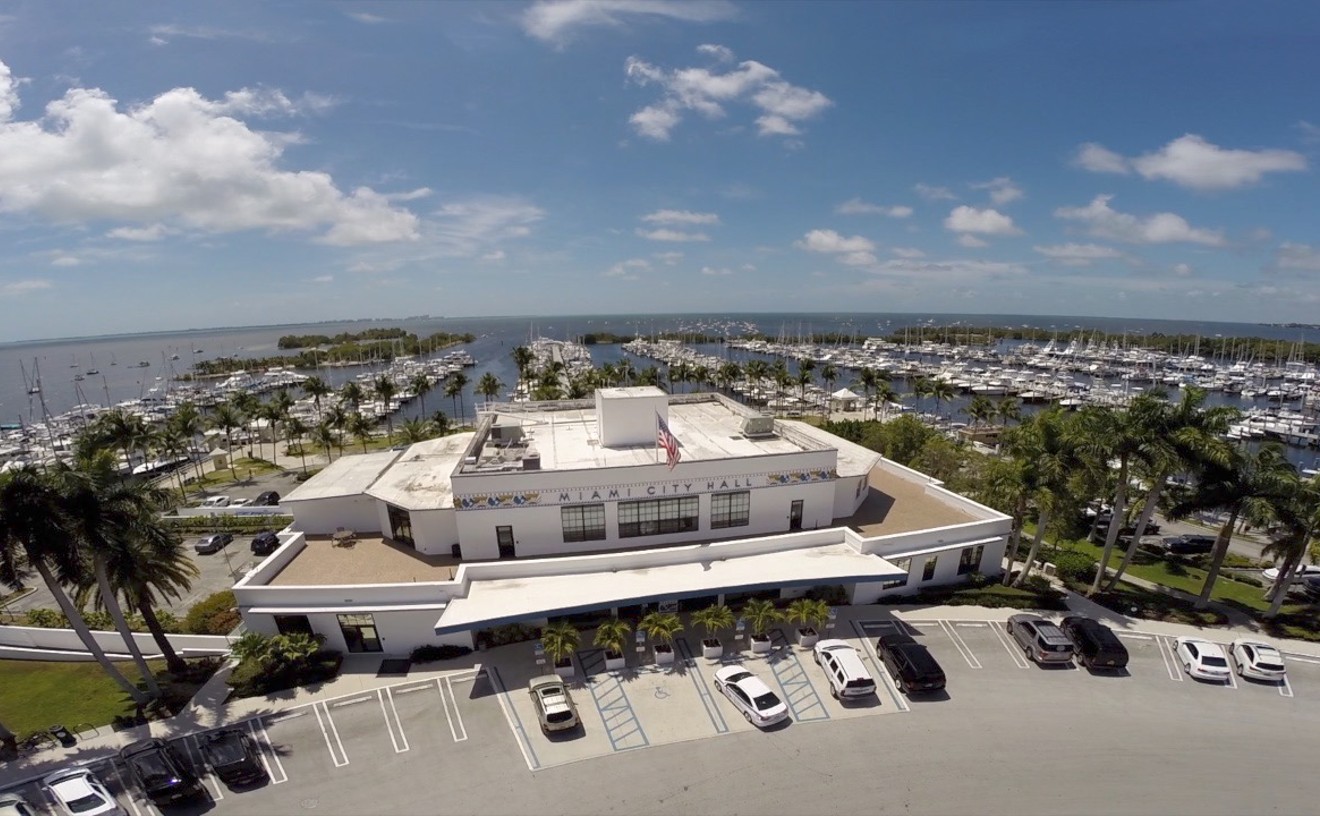 Courtesy of City of Miami

Sometimes a 15-minute micro-staycation is all you need to remain sane in a city that can easily turn you wacko. One evening, just before sunset, head to Coconut Grove and park your car at Miami City Hall. Stroll up to the iconic white building and head left. Walk to the railing. There, stop and stare at the magnificent, steely-gray skyline; the graceful, sprawling clouds; the shimmering turquoise water. Watch the birds dip and swoop. You'll see boats glide seamlessly across the bay as people eat and chatter at the docks. Gaze out on the glorious blue-green oasis that is Miami's backyard, and remember how lucky you are to live here.

One of the greatest joys of running in Miami is experiencing the astounding natural beauty. It inspires you run a little faster or farther. If speed in a wonderland is what you're after, Brickell Key is hard to beat. The jogging trail surrounding the southern island runs about a mile, and each step of the way, you look over fabulous bay views and extravagant yachts. If you're lucky, you'll glance a dolphin or manatee. The smell of salt and the aroma of flowers wafting in the breeze is a lot nicer than the smog of traffic across the bridge. It's an especially welcome respite during the summer. At least half the time, you'll be in the shade. After your jog, there are juice bars and restaurants — even spas if you want to treat yourself. But getting the blood pumping in a place as serene and scenic as this is good enough on its own.

Wake up early on a Saturday. Load your Schwinn with a water bottle onto the car. Then head south. Park at Larry & Penny Thompson Park, just south of Zoo Miami. Opened in late 2012, this paved path hugging the Black Creek Canal begins at SW 137th Avenue amid empty fields, winds through subdivisions, and crosses South Dixie Highway. After nearly seven miles, you'll pass one of the county's largest landfills. Not sold? Well, surprisingly, you don't even notice the landfill on this path. The breeze generally blows away the smell, and the view of water and trees is breathtaking. There's no traffic, and the pedaling is smooth. Along the way, you'll spot bright birds and ducks, maybe an iguana or two basking in the sun. The 8.5-mile route finishes at Black Point Park & Marina, on Biscayne Bay, where there's a good chance you'll spot manatees. Even if you don't, you can still grab a great burger or fresh seafood at Black Point Ocean Grill. After this ride, you'll be hungry — and you'll never look at this little section of Miami-Dade the same way again.

Thousands of Miamians drive past them every day. Almost nobody knows they're there. The tennis courts at Palm Island Park, three hard courts with lights, are just a stone's throw from the MacArthur Causeway but a world away from the big city. Tucked into a quiet residential neighborhood, the park is lush with mature green palms and a well-kept lawn. Just a few feet from the north bank of courts lies that famous Miami blue — Biscayne Bay. Best of all, the tennis at Palm Island is 100 percent free. Just don't be surprised if you have to wait a few minutes during peak hours. Miami's best-kept tennis secret isn't totally secret, after all.