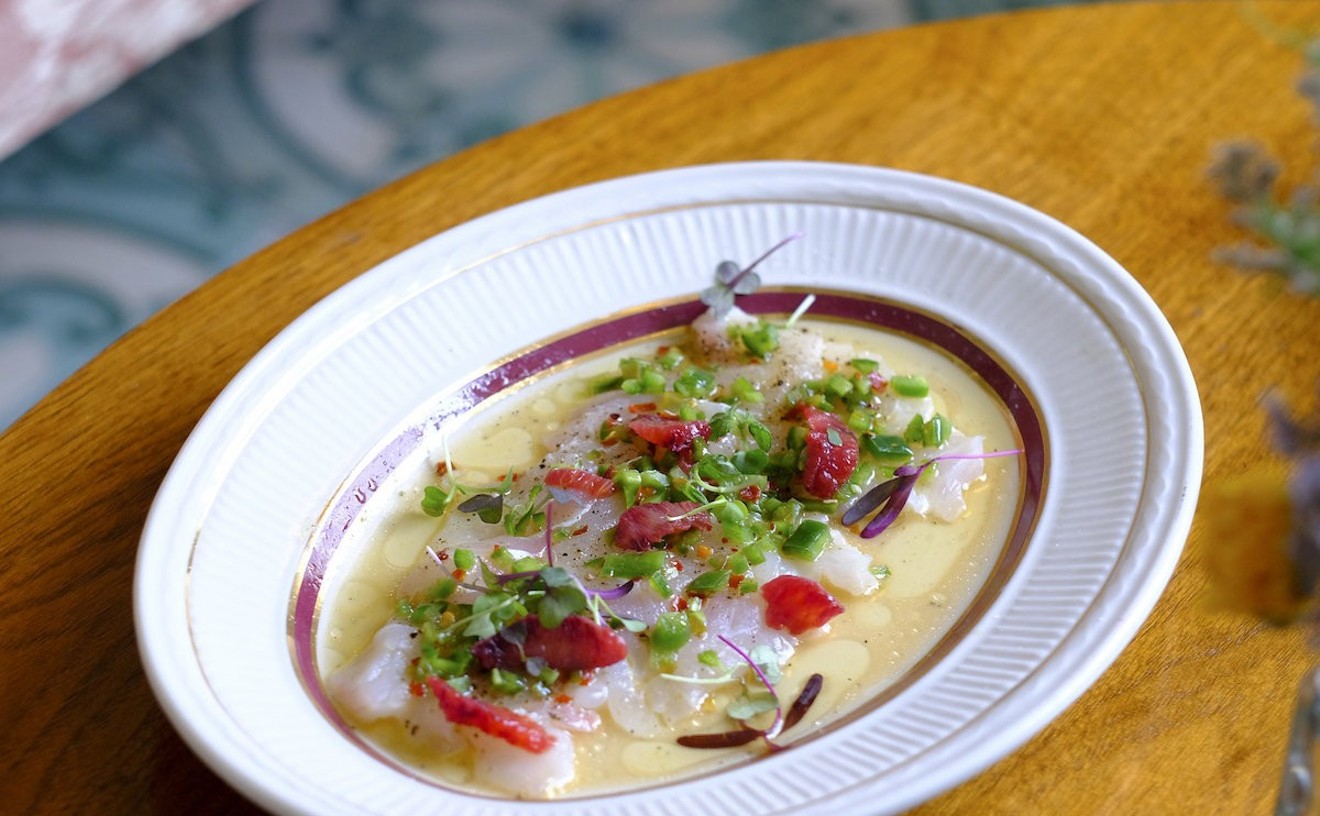 At this quaint spot in Miami's fast-growing Little River neighborhood, well-known restaurateur Barclay Graebner's crew treats you like family. It starts when you take a seat and a server presents you with a massive wheel of Grana Padano, then encourages you to take a hunk. A stack of oversize, house-baked cookies sits nearby. They're perfect for dessert, but before you try them, a regiment of servers in hipster attire will tend to your every need and skillfully guide you toward the menu's best offerings. Dedicated carnivore? Go for bone marrow ($14). Vegan? Try the chief's bowl ($18) with sweet potato, coconut curry, brown rice, and lentils. The big winner, however, is the rabbit potpie ($18), boasting a buttery, flaky, crisp pastry crown and a rich gravy that could instantly transport the most harried office worker to a place of pure delight. 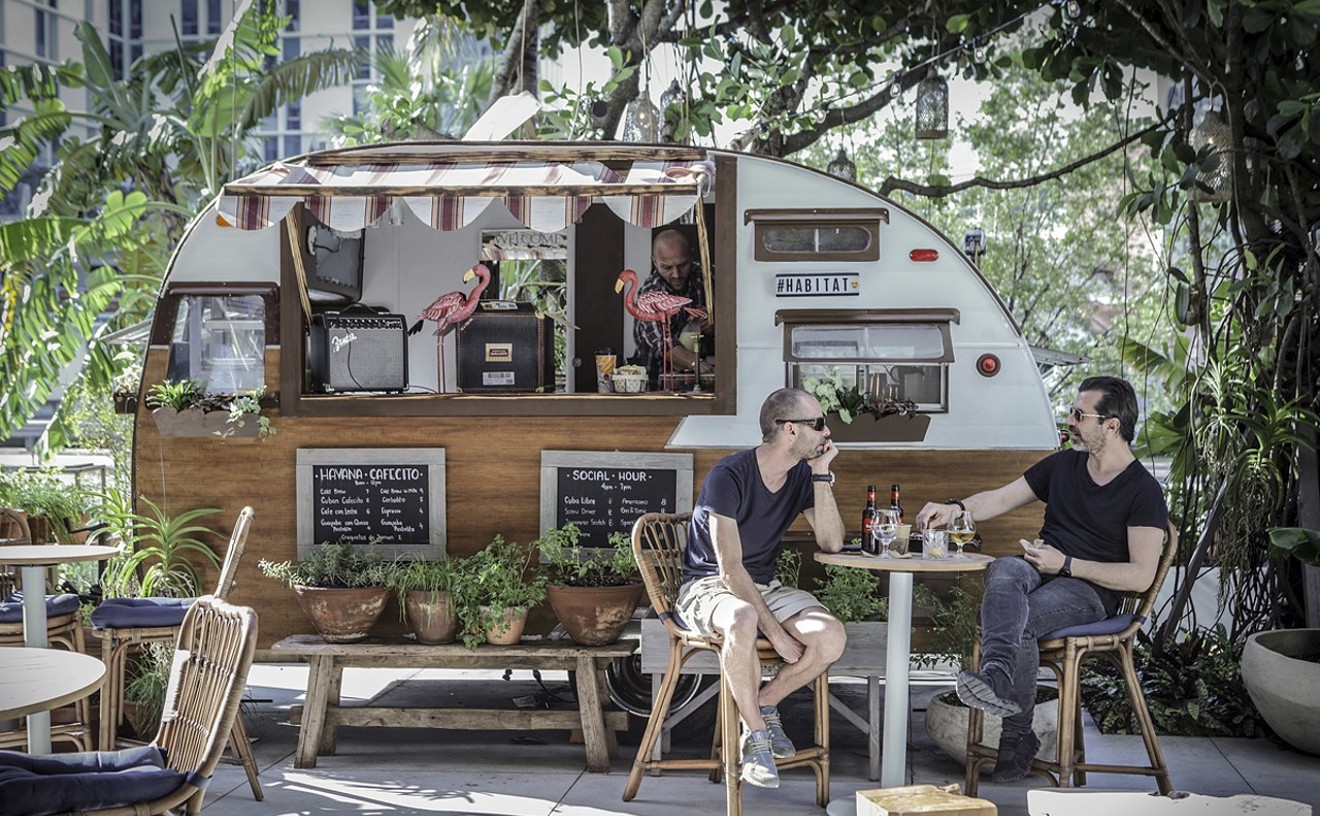 Five-time James Beard Award-nominated chef Jose Mendin is responsible for Habitat, a Spanish-influenced restaurant in the former Beachcraft space at the 1 Hotel South Beach. The indoor/outdoor property is stunning, exuding a strikingly warm glow through rustic wooden decor and gold and copper accents. But the real treat is the patio, where you'll find a canopy of trees draped in dangling lights. Its centerpiece is a small vintage camper stocked with cafecitos and cocktails. Sip Habitat's popular tequila cocktail, the Fifth Element ($15), made with avocado, agave, and tropical fruit and rimmed with citrus sea salt. As night falls, enjoy an order of the Skuna Bay salmon coated in crunchy everything-bagel seasoning ($24), octopus a la planxa ($21), or patatas arrubravas drizzled in a light aioli ($13). Though the patio borders Collins Avenue, the mixture of fine food, tasty cocktails, and a beautiful setting wipes away the chaos of South Beach. Try Habitat from 7 a.m. to 4 p.m. daily, 6 to 11 p.m. Sunday through Thursday, and 6 p.m. to midnight Friday and Saturday. 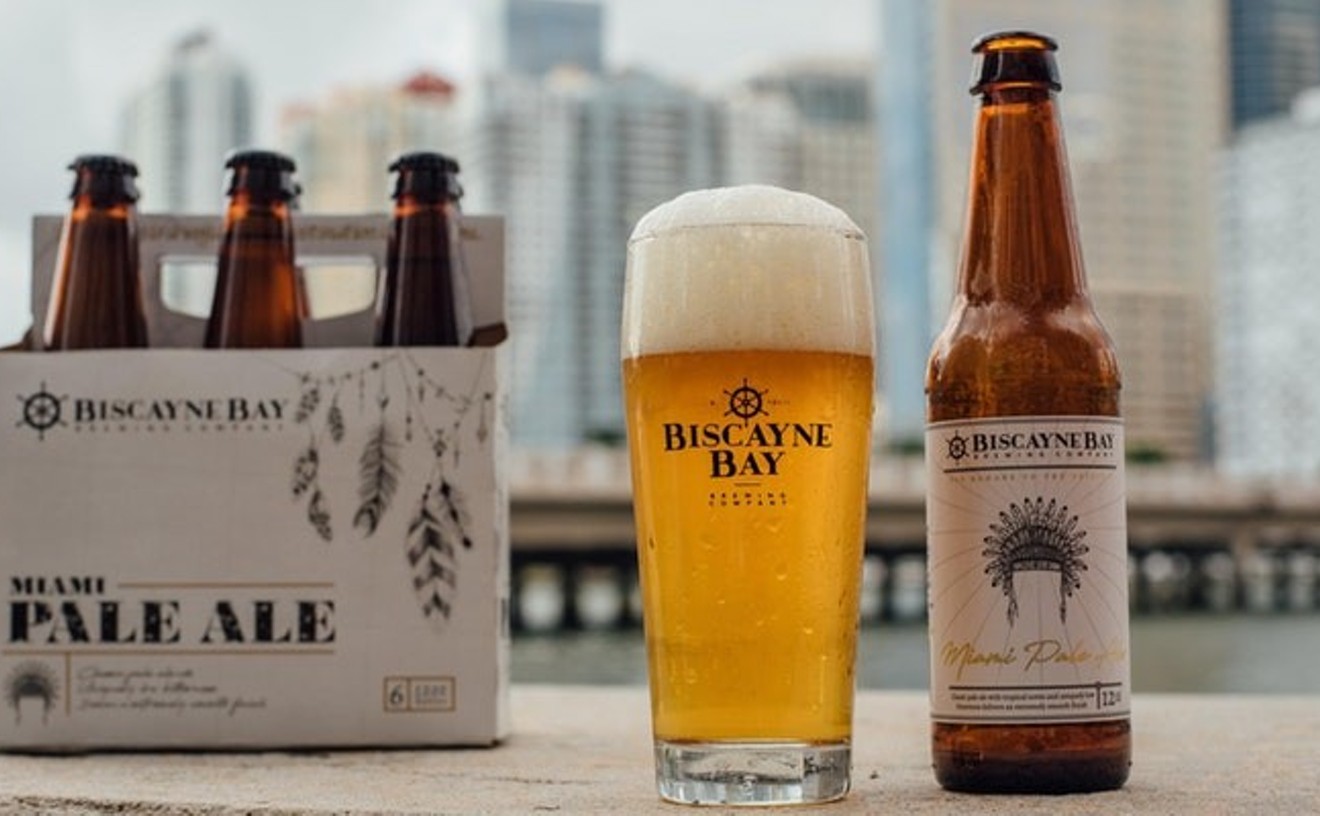 Sure, it's fun to experiment with beers that taste like candy bars and gummy bears. But when you want a no-frills, locally made beer that's just damn good, go to Biscayne Bay Brewing. The brewery opened about three years ago in Doral, so why the name Biscayne Bay? Well, the beers are made with water from the Biscayne Aquifer. That's Miami AF, dude. Brewmaster Chris Gil's approach to beer is classic. That means when you pour one of the brewery's core beers — whether it be a saison, a pale ale, an IPA, a kolsch, or a porter — you'll get a fresh beer that tastes like beer and not a glass of liquefied Lucky Charms. Even the limited-edition and experimental beers aren't gimmicky; think a good ale aged in a whiskey barrel. Hang out at the brewery, where a pint costs about five bucks (or $2.50 from 3 to 7 p.m. daily), but you don't even have to drive out to Doral. Biscayne Bay's beers are sold at most Whole Foods, Publix, and Total Wine locations. The brewery's hours are noon to 10 p.m. Sunday, 3 to 11 p.m. Monday through Thursday, and noon to 1 a.m. Friday and Saturday.

Miami's beer game is strong, with breweries popping up in unexpected places such as Opa-locka and the Upper Eastside, but let's not forget Miami's OG brewery — Wynwood Brewing. Because it was the first production brewery in the city of Miami, the father-and-son team of Luis and Luis Brignoni had to actually help write local laws. When it opened, the brewers strove to integrate themselves into Wynwood's artistic community. Indeed, that's happened, with the brewery hosting art shows and fashioning its tap handles to look like spray-paint cans. But what also happened is that the brewery was the catalyst that turned Wynwood into the heart of Miami's beer scene. Now the neighborhood boasts four breweries, with more on the way, and restaurants and bars in the area proudly serve craft beer made just a short walk away. Tourists and day-trippers from points north and west come to Wynwood for a beer crawl as much as for its famous murals. You could say beer imitates art, but, more accurately, beer is art. Wynwood Brewing is open from noon to 10 p.m. Sunday through Tuesday and noon to midnight Wednesday through Saturday. 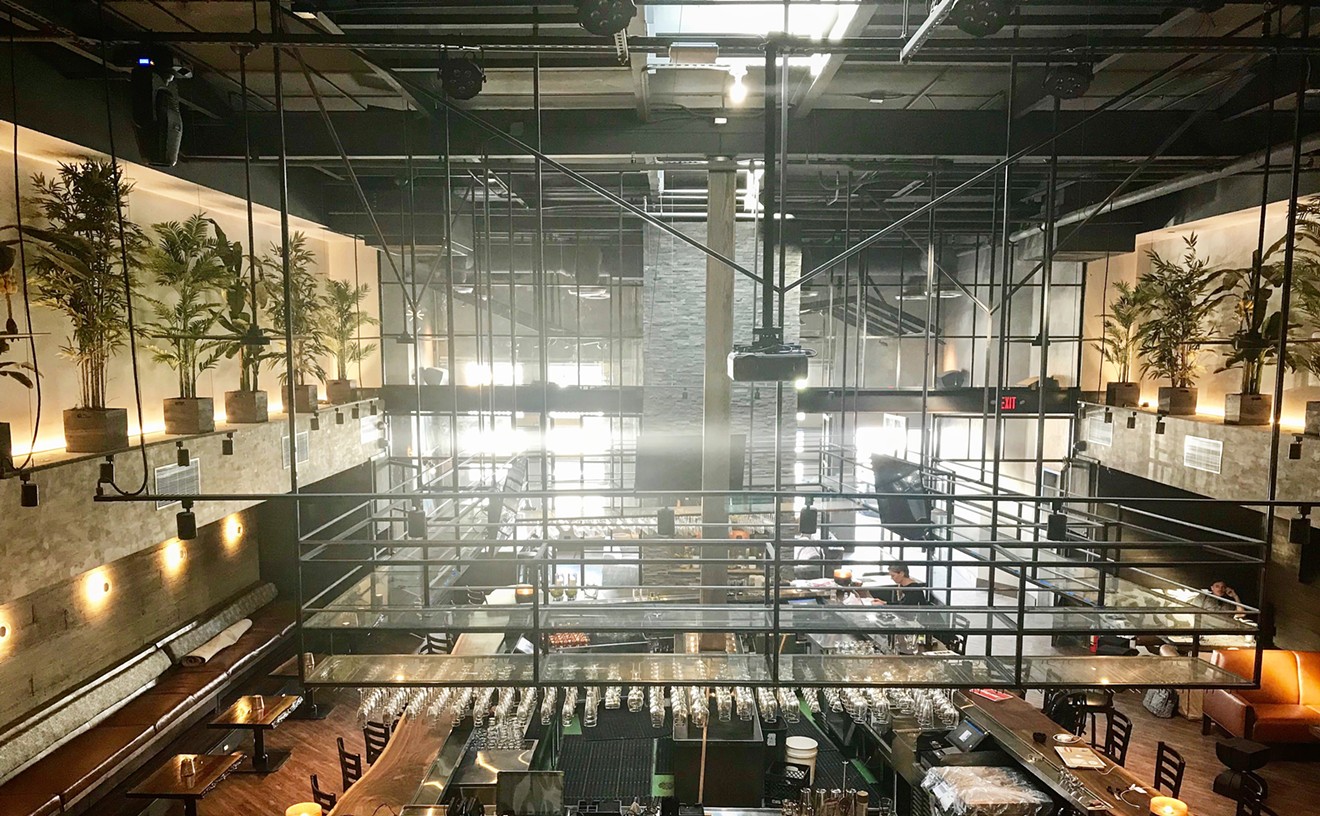 After spending the day in the hot Wynwood sun posing for selfies with Trump, Yoda, and all the other wall paintings, you need shelter and a drink. Enter Rácket, two bars in one, where your thirst can be sated depending upon your mood. Feeling a little tiki? The atrium room has you covered with rum-and-tequila-based drinks such as the Pinky and the Bat, made with Bacardi Superior, St-Germain, guava, strawberry, and pink pepper. If your spirits are soaring, the sky-lit room offers a place where you can drink under the stars. Gin and vodka cocktails take center stage in this area. Try the Divine Oddities, a bubbly concoction made with Hendrick's gin, rose hips, and a hint of cayenne to tingle your lips. Cocktails cost about $14 each. Best of all: Rácket opens daily at 1 p.m., so you can day-drink whenever you want. Hours are 1 p.m. to 3 a.m. daily.

It's fitting to find a place like Abaco in the Design District. Part retail store and part tasting room, this swank, high-tech wine bar carries thousands of sparkling bottles, from well-known vintages to more experimental up-and-comers. Search through Abaco's stock using in-house iPads, which provide information about each varietal. The shop is equipped with a beer and wine license, allowing for intimate winetastings, classes, and events with local restaurants. Among the most popular of these events is one with famed sweets maker the Salty Donut, which offers evening dessert tastings paired with red, white, and rosé wines. Abaco is open from 11 a.m. to 8 p.m. Monday through Saturday and noon to 6 p.m. Sunday.

If you like a good story with your cocktail, just ask your bartender at City Hall Martini Bar about the permanent residents of Hotel Redland. You see, the original version of this vintage inn, known as the oldest building in Homestead, burned down in 1913, killing several guests in their sleep. Some say they still haunt the place — along with a few feline apparitions. The bartenders at the martini bar are more than happy to tell tales of what they've seen, and the stories get better as you consume more drinks. That's easy to do, because the bar's prices are far more reasonable than those Miamians are used to paying. Martinis and other cocktails cost about ten bucks and include retro favorites such as the Woo Woo (vodka, cranberry, and peach schnapps) and the Flamingo (rum and pineapple). The drinks are cheap, and the campfire stories are free, making City Hall the most interesting drinking experience you'll have in Miami-Dade. Hours are 3 to 9 p.m. Sunday and 3 to 10 p.m. Monday through Saturday.

Sometimes you're in the mood for a cocktail made in 20 minutes by a gregarious bartender. Other times you just want a beer and a shot with friends. Doral Billiards is the latter. The sports bar and lounge, going strong since 2006, has a good beer selection, 19 Brunswick pool tables, and a bar-food menu that's a blend of all-American favorites such as chicken wings (ten for $11.50) and rib tips (five for $11). There are also Latin American offerings like grilled churrasco ($14.95) and picadillo ($11). Wash them down with a traditional Moscow mule for about half the price of what you would pay on the Beach, because most cocktails here cost less than ten bucks. It's a win-win without having to schlep on the Dolphin Expressway.

Sports bars are plentiful around suburban Miami-Dade, but they're hard to come by in downtown. Sure, some central-city establishments occasionally broadcast games, but the atmosphere often lacks the je ne sais quoi of that at a local sports bar. Considering that point along with exorbitant drink prices, and you might as well have gone to a nightclub and ordered bottle service. Black Market Miami is different. It delivers a polished, sports-focused vibe but leaves the crazy drink prices for the club. The bar offers 13 beers on draft, 16 in bottles, and six in cans, averaging $6 to $8, while cocktails, including Moscow mules and caipirinhas, run about $10 to $15. Hungry? The food menu lists all the sports-bar staples. Twelve wings cost $13.50, and the cheeseburger made with grass-fed beef patty is $14. And because 30 4K TV screens are spread throughout the 5,000-square-foot space, there isn't a bad seat in the house. Don't worry if it isn't game day — Black Market stays open daily until 2 a.m.

Photo courtesy of the Scape Goat

Here's the scenario: You stumble upon a door and enter. Inside, you find a room with black walls. On the counter sits a display: ice picks, blow torches, and other tools. You might think you've walked onto the set of a Hostel movie, except for the friendly faces at the bar. These people don't want to torture you. They want to fix you a drink. The Scape Goat is like any neighborhood bar — if that neighborhood bar served an old-fashioned made with cedar plank smoke ($14). Of course, if you just want a beer and a shot, you can get that too; here, it's called a Happy Meal, so request the secret menu. On a budget? Check out the daily happy hour from 5 to 8 p.m., where select beers cost $4 and house cocktails run $8. Oh, and the Scape Goat has a policy of serving American-made spirits and beers, so you can drink like a patriot. Call it the SoBe version of MAGA. Hours are 5 p.m. to 5 a.m. daily.