Courtesy of Leap for Ladies

Dragonfly is everything you want in a thrift shop — a clean space, a wide selection, and friendly service. At this recently opened store in Little Havana, you'll find everything from Prada heels to vintage glassware to gently worn staples from familiar brands such as Tory Burch and Madewell. But on top of that, you'll also be supporting a great local cause. Every cent of the proceeds from sales at Dragonfly goes to supporting the work of LEAP, a local nonprofit that works with women as they transition back into society from jail or prison. More important, the thrift store gives those women a place to earn an income and gain on-the-job skills. So go pick up some retro scarves or a pair of upholstered chairs — in this case, it really is retail therapy.

Natural K9 Supplies is basically Whole Foods Market for your dog. But where you can usually get away with eating generic frosted flakes instead of the organic kind that costs twice the price, you really ought to shell out to make sure your pets are getting quality ingredients in their meals and treats. Pet food, after all, can be filled with all sorts of dangerous garbage. Not so at Natural K9: If your dog has stomach problems, you bet the staff will be able to help find a food that agrees with your furry pal's stomach. You can guarantee that bones and chew toys don't come from some radioactive factory in a former Soviet republic. (Natural K9 also takes online orders if you can't get to the store.) And if your dog has the sort of halitosis that can melt tempered steel, the store offers non-anesthetic dental cleaning, which means you can protect your pup's teeth without putting him or her under. Said cleaning trip doubles as an adorable photo shoot of your dog at the dentist.

"New haircut who dis?" That's the text many Kendall dog owners are receiving from their pups these days. Don't be alarmed — they're just living the #pamperedlife. A trip to this friendly neighborhood shop will not only leave your dog feeling sassy AF but also make them squeaky clean after a salon and spa treatment (the Bubbles package starts at $30, and the Royal starts at $50). We all know Fido deserves the Royal package, which includes aromatherapy shampoo, moisturizing conditioner, an ear cleaning and pluck, a nail trim and buff for those daggers, anal gland expression, blow dry and fluff, perfume or cologne, and a styled haircut. Don't worry — everyone is family here, no matter how gnarly. Pepe Le Pooche Resort & Spa also offers cage-free boarding and daycare, pet supplies, and non-anesthetic dental cleaning that'll leave their mouths smelling better than their butts. Hear that? It's the sound of your pup talking like a high-pitched baby after its Paris Hilton-like treatment. All Fluffy needs is the diamond-encrusted collar — ahem, necklace. Treat your dog to the good life Monday through Saturday from 7:30 a.m. to 6 p.m. 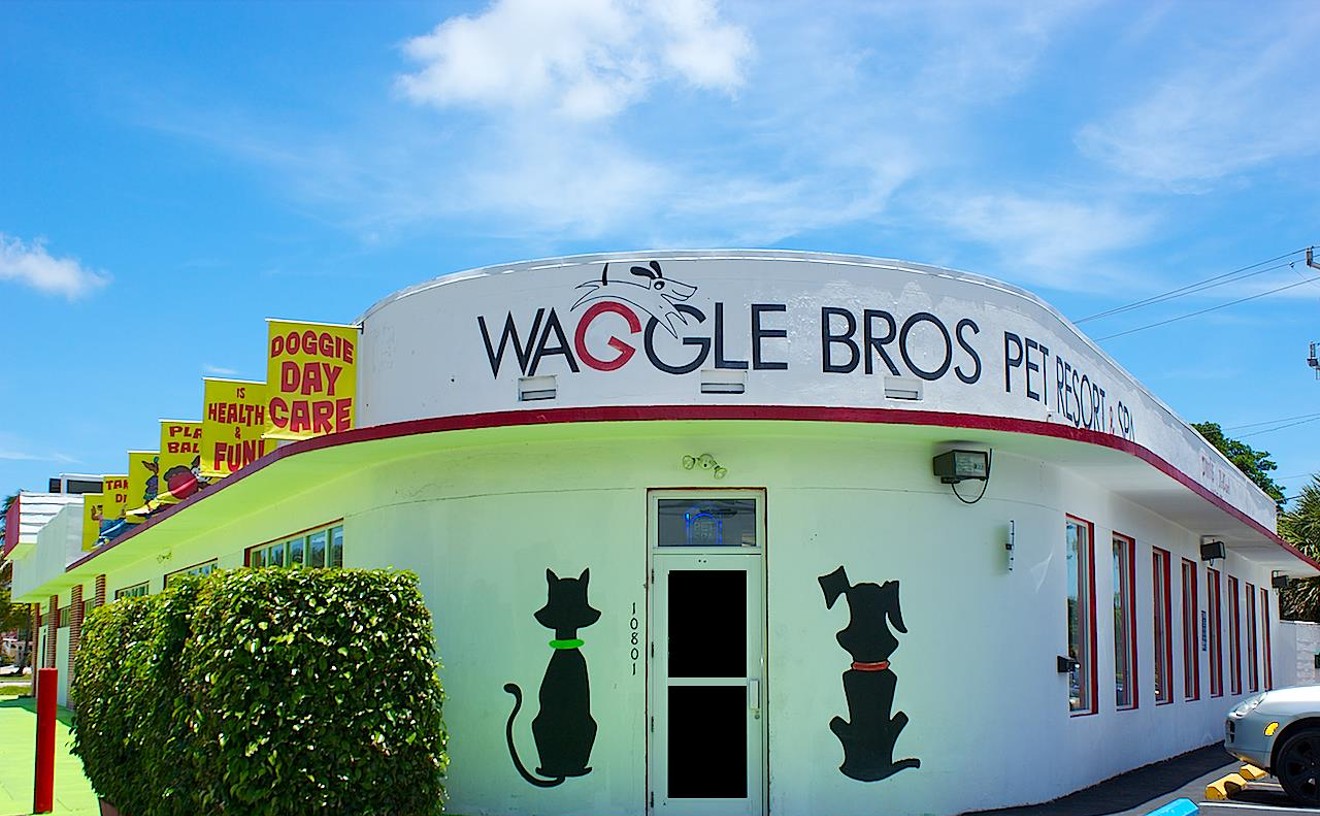 You've just planned that fantastic tiger safari in India or that Alaskan cruise when, suddenly, you look over and see your poodle Muffles staring up at you with her big brown eyes. Doesn't she deserve a vacation too? At Waggle Bros, Muffles can splash in the pool, sunbathe, scamper outside, and maybe even meet the beagle of her dreams. The resort, which has been open for more than a decade, offers doggie daycare and overnight stays at its resort, starting at $26 a day. Onsite grooming will make sure your pooch is pampered, and there's even a gift shop (in case guilt kicks in). Fluffy gets the royal treatment at the Kattery — a kitty-designated spot where your feline can indulge her inner lioness. Who knows? Muffles might have a better time on her vacation than you had at that Airbnb in Barcelona. Waggle Bros is open from 7 a.m. to 8 p.m. Monday through Friday, 9 a.m. to 5 p.m. Saturday, and 11 a.m. to 3 p.m. Sunday.

Loving your pet means regular visits to the vet for shots, blood work, and a good examination after Rusty decides to eat a lizard (yuck). Your pet, however, doesn't quite see eye-to-eye with you on this one. Though Sparky usually greets you with a wagging tail and yips of joy whenever the leash comes out, somehow his little doggy brain knows when it's time for the vet. Uncontrollable shaking, shedding, and crying fill the car ride as your pet lets you know of your betrayal. But there's an easier way. Just call Fetch My Vet. A team of trained animal doctors will show up at your door with everything they need to thoroughly examine your pet. From toting a scale to weigh your tabby to the required shots and rabies tag, they work efficiently and carefully. Best of all: Fido gets to stay at home, so the visit is done before he even knows what happened. Fetch My Vet also has an online prescription service. The docs can order any meds your pet might need, such as heartworm or flea medication, and have it delivered to your door. Give your pup a treat and break out that Chardonnay to congratulate yourself on a stress-free job well done.

Buying or selling real estate in Miami is challenging. The market fluctuates, and prices are insane. Just when you think you've found a place to live, a Russian oligarch or South American billionaire decides to purchase your apartment — and the entire condo building — as a gift for his or her parakeet. Don't get frustrated; just call Wes Pearce at 305-790-3331. With model good looks, Pearce could be in the cast of one of those Bravo shows. But he prefers to spend his time helping clients find the perfect home. He'll happily show you houses and even makes videos of the neighborhoods that are hidden values. And Pearce will walk you through the tedious process of getting a mortgage, inspection, and appraisal — right up until the time he drops the keys into your hand.

Steven Fett is an architect, urban designer, and educator in Miami. Skillful, generous, and prompt, he has an office in downtown Miami that specializes in designing small to midsize residential, commercial, and civic architecture. He holds master's degrees in architecture and urban design from the University of Miami, where he also works as a lecturer and is loved by students for his friendly demeanor and sense of humor. He has built projects in Florida and other tropical locations such as Haiti. Recent designs include Lauderdale-by-the-Sea public plazas, Fashion Row in Hallandale Beach, Brickell Stage, Jungle House in Miami, and a Kellogg Foundation-sponsored sustainable village and learning community in Haiti.

There are all kinds of psychics in this city and a multiplicity of futures they're willing to sell you. But at the end of the day, there is only one true mago del futuro y del mundo místico: Walter Mercado. To call him a psychic is to call Picasso a painter — it's accurate, but it's also a grave understatement of his majestic talents. Mercado, who is also known as Shanti Ananda, which is Sanskrit for "peace happiness," has been one of the most famous and fabulous practitioners of the mystic arts for more than 50 years. The 86-year-old Puerto Rican wizard, who doesn't look a day over 60, is still as vibrant as ever. He remains a regular contributor to El Nuevo Herald through his daily horoscopes as well as his annual prediction videos, resplendent with rolling r's, feathery blond hair, and, most important, the timeless advice of Latin America's greatest astrologer. Sure, you could go to a dim parlor lit by neon and candles to have your future divined, but wouldn't you rather listen to the man who has been described by BuzzFeed as the Beyoncé of TV astrology and who does everything "con mucho, mucho amor"?