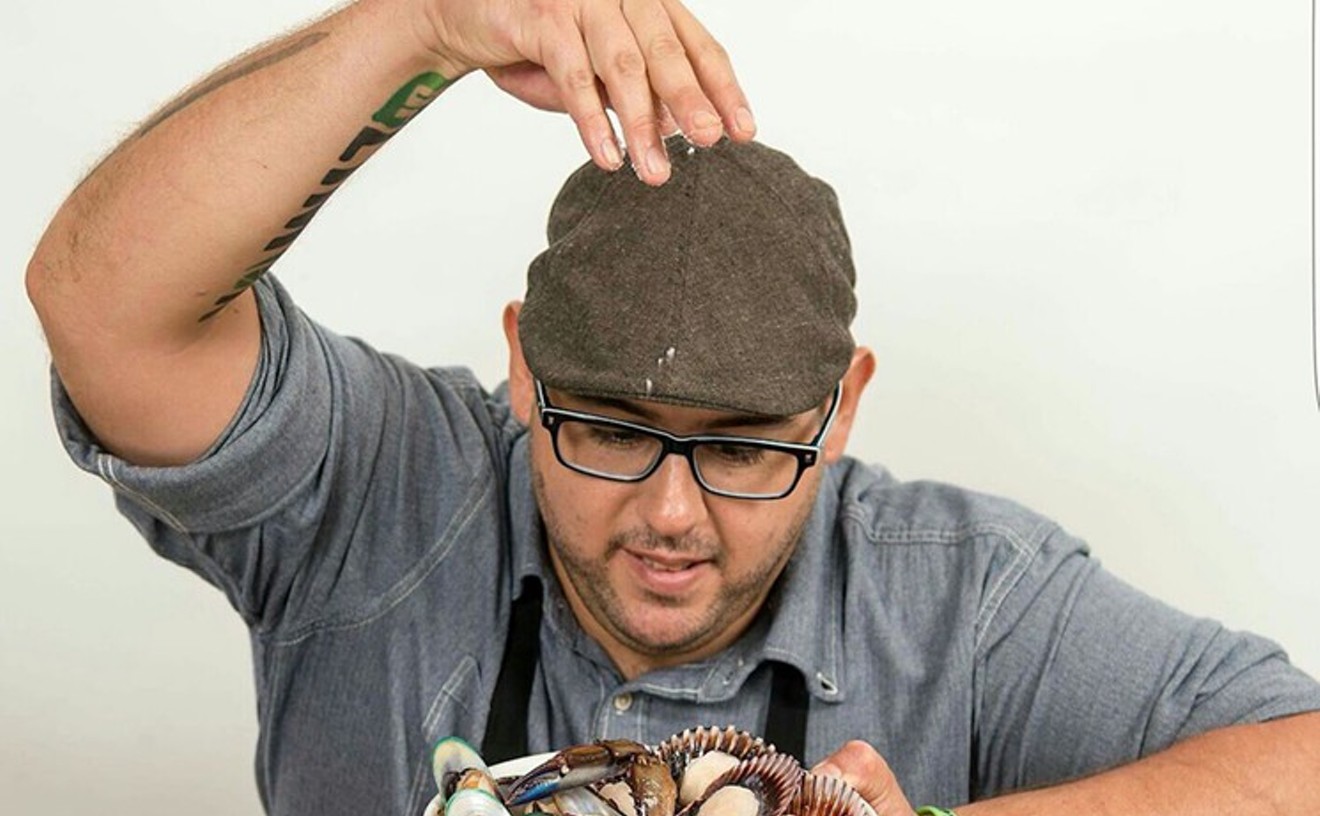 Courtesy of Dr. Limón
Dr. Limón chef/owner Carlos Brescia puts the final touches on one of his 20-plus ceviches.

Chef/owner of Dr. Limón, Carlos Brescia, named his restaurant after the key ingredient in his quintessential dish: ceviche. Limón — "lime" in Spanish for you gringos — can be found in almost all of Brescia's dishes. The chef likes to say, "ceviche starts here," but what he should really be expressing is "your hangover ends here." Before moving to the States from Peru in the early 2000s, Brescia used to wake up early after long nights of partying to prepare hangover-curing meals for friends and family. Today his Miami-based Peruvian concept with four locations (and one on the way) offers one of South Florida's largest ceviche selections. Aside from its high vitamin C content and antioxidants, lime juice leaves everyone feeling better — precisely the same feeling everyone should have after visiting a doctor. With more than 20 variations of the raw-fish dish on the menu, this is one of the best places to go after a little too much liquor for some hangover-curing leche de tigre. The concoction is concentrated ceviche liquid that includes a combination of lime, fish stock, onions, garlic, ají limo, and cilantro. At Dr. Limón, try it as part of the Santo Remedio ($10), seven shot-size glasses of his most colorful leche de tigre offerings, each prepared using various peppers and ingredients. Halfway through, you'll be ready to party all over again. Ladies and gentlemen, please fasten your seat belts. Your flight to Florence via Capri, Sicily, and Roma is about to depart. That's what a visit to La Centrale, the three-level food hall celebrating all things Italian, simulates. On the first floor, choose from Italian pastries such as cannoli ($11) and torta della nonna ($9). Perhaps more to your liking is a wood-fired pizza ($13 to $22) that rivals the best in Napoli. On the second floor, have a negroni or an Aperol spritz at the apéritif bar before enjoying charcuterie or langoustines flown in from the Mediterranean. On the third floor, you'll find a wine cellar, where you can enjoy a red made from the fertile and volcanic soil of Sicily or a white that's as crisp and bright as a spring morning in Amalfi. What you won't find at La Centrale is inauthentic anything — don't come ready to order spaghetti and meatballs. Instead, eat like a true Italian, grazing from station to station while laughing boisterously with your friends. It's la dolce vita in Brickell. The food hall is open from 7 a.m. to midnight daily, but individual station hours vary.

Chef/restaurateur Richard Hales has long been known for his Asian-fusion restaurants. After a road trip through the Southern United States left him obsessed with Nashville hot chicken, country ham, and skillet cornbread, Hales opened Bird & Bone, a Miami Beach eatery serving his unique takes on those classics, inside the Confidante hotel. His hot chicken, for instance, is made with local birds that are brined for juiciness and then dry-aged for three days (much like a Peking duck). The fried pieces are drizzled with Chinese hot mustard and honey and served on Zak the Baker bread. Enjoy your meal on a beautiful patio with the gentle sound of the nearby waves crashing on the sand for one soulful evening meal. Hours are 7 a.m. to 10 p.m. Sunday through Thursday and 7 a.m. to 11 p.m. Friday and Saturday.

Eating inexpensively is difficult in Miami, where a cheeseburger can set you back 20 bucks. Factor in eating healthy and delicious, and you have a dilemma. Ono Poke has got your back. This small Wynwood shop, resplendent in bright pinks and greens, serves a small menu of food that's delectable and well priced. Ono offers basically one thing — a poke bowl ($13 to $16). But that bowl, customized to your liking, is filled with only really good stuff. The fish — the prize ingredient of a good poke bowl — is made with high-quality sushi-grade fish that's never frozen. In fact, the shop closes when it runs out of seafood for the day. Customize your bowl with rice, greens, ginger, pickled cucumbers, or other delicious toppings until your container looks as colorful as a Hawaiian garden after a rain. The result is the most heavenly lunch that also happens to be nutritious. Hours are 11:30 a.m. to 5:30 p.m. Monday through Friday and noon to 8 p.m. Saturday and Sunday, but the shop closes early when it sells out of fish.

Courtesy of the Genuine Hospitality Group

Michael Schwartz's latest restaurant is beautifully set on Biscayne Bay. Located in Miami's Edgewater neighborhood, the 4,500-square-foot dining room boasts indoor and outdoor seating, all with a waterfront view. The James Beard Award-winning chef, best known for his Michael's Genuine Food & Drink, calls Amara at Paraiso a "love letter to Miami." But the restaurant offers more than an exceptional location — the food is equally satisfying. The menu includes Latin American-influenced dishes cooked using a wood grill and a Josper charcoal oven. Standouts include crispy octopus with braised yucca ($21) and a parrillada of short rib, chorizo, sweet breads, and steak. Hours are 6 to 11 p.m. Monday through Thursday, 6 p.m. to midnight Friday and Saturday, and 11 a.m. to 3 p.m. and 6 to 10 p.m. Sunday. 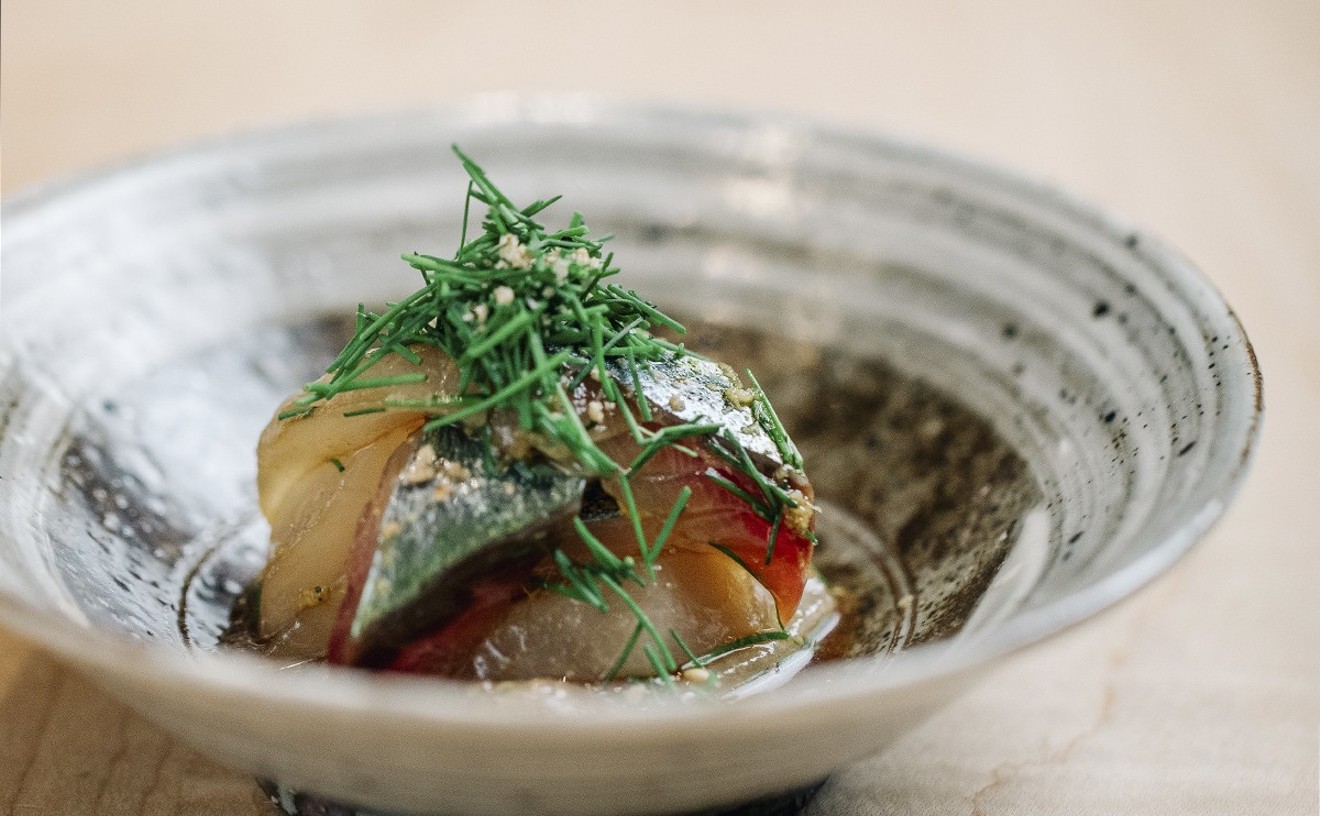 Inside the Taco Stand in Wynwood, a small silver keypad hangs next to a bare copper wall. Enter a secret code, and the wall becomes a sliding door. It opens slowly and carefully, revealing a covert room fit for no more than ten people. This is Hiden, a mysterious omakase restaurant where $130 will get you 15 courses of fish flown in from Japan. Dining here requires reservations. Once you book a meal, you receive a four-digit code granting access to the private sushi den. Walk through the taco joint, blaring with mariachi music and steaming with the aroma of freshly fried tortillas, toward the back of the restaurant, where the copper door beckons. There are no menus. Your meal will be in the hands of Brazilian-Japanese executive chef Tadashi Shiraishi, who will decide what to serve only hours before your arrival. Traditionally, he offers two cold appetizers, a soup, seven to eight sushi courses, a hot item, and dessert. The two-hour experience is limited to eight diners, and seatings are at 7 and 10 p.m. Saturday through Sunday. Before Janine Booth and Jeff McInnis were Miami restaurant royalty, they set sail on a fishing trip from South Beach late one sunny afternoon in fall 2013. The blond Barbie and Ken look-alikes motored west toward Stiltsville and kissed for the first time. Nearly five years later, McInnis and Booth are behind Sunset Harbour's Stiltsville Fish Bar, which opened in 2015. Housed inside a quaint 1940s structure, the warm, nautically inspired space is a lovely reminder of that fall afternoon. This is the place to bring your love, order the "big fish for two"($50 to $65), and gaze toward the Sunset Harbour dock. You might just find the same kind of luck Booth and McInnis found. Try Stiltsville Fish Bar from 11 a.m. to 3 p.m. Monday through Friday, 5 to 11 p.m. Sunday through Thursday, and until midnight Friday and Saturday. It is also open from 11:30 a.m. to 4 p.m. Saturday and Sunday. 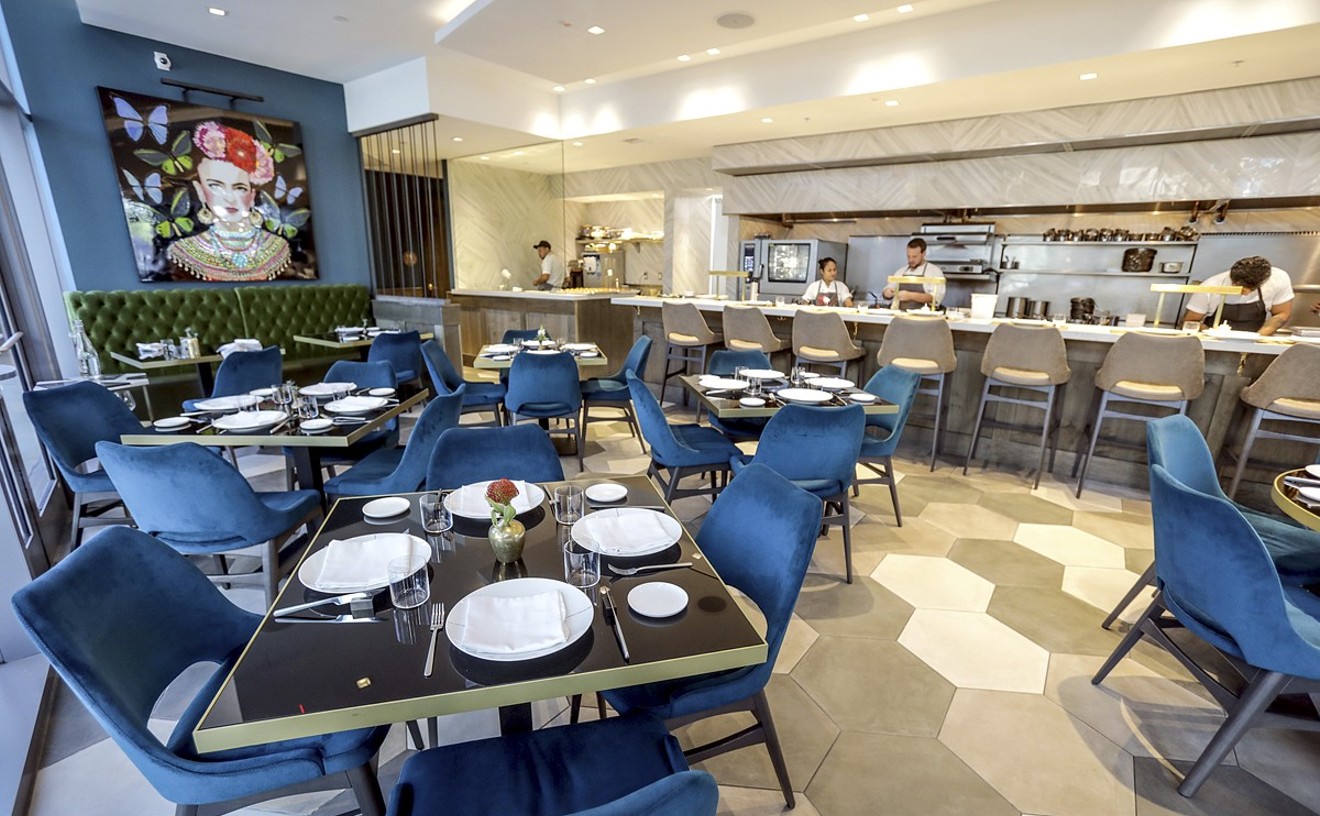 At Three, Mango Gang legend Norman Van Aken cooks his signature Florida fusion cuisine in a sleek and tropical space. The staff is disciplined, and the food is topnotch. But even more spectacular is the space. It's outfitted with midcentury modern furnishings such as royal-blue velvet chairs and gold-trimmed black tables. An impressive Frida Kahlo portrait hangs adjacent to a marble bar facing an open kitchen. Tables are streamlined and allow for diners to spread out while remaining close. Customers dining in pairs should opt for the three-course experience ($65 per person). Or leave it up to Van Aken and chef de cuisine Juan Garrido to choose the menu for a five-course tasting menu ($90 per person). Hours are 5:30 to 10:30 p.m. Tuesday and Wednesday, noon to 3 p.m. and 5:30 to 11 p.m. Thursday, noon to 3 p.m. and 5:30 to 11:30 p.m. Friday and Saturday, and 11 a.m. to 4 p.m. Sunday. 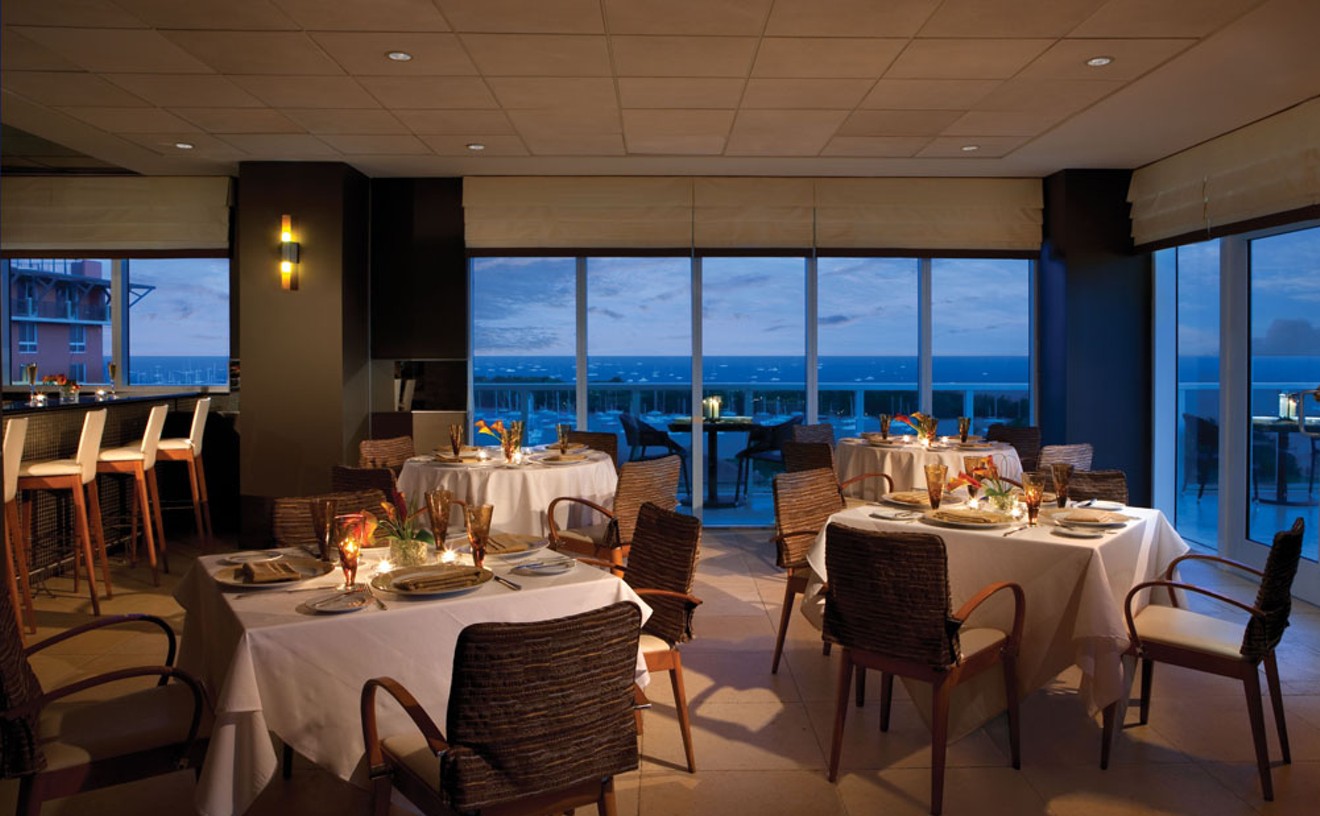 On the eighth floor of the Sonesta resort in Coconut Grove, gaze out at Biscayne Bay while snacking on upscale Peruvian food. Nestled on a quiet street, the restaurant is as a retreat for locals and tourists alike from morning till night. The expansive patio is filled with low-slung lounge chairs and tables. Food varies throughout the day, from continental breakfast offerings in the morning to more sophisticated Latin American-influenced items in the evening. Panorama's ceviches are a crowd favorite. Try the tuna Nikkei with garlic marinade or the traditional with corvina and lime juice ($15 and up). Then just enjoy the view. It is spectacular. Panorama is open from 7 a.m. to 11 p.m. daily. 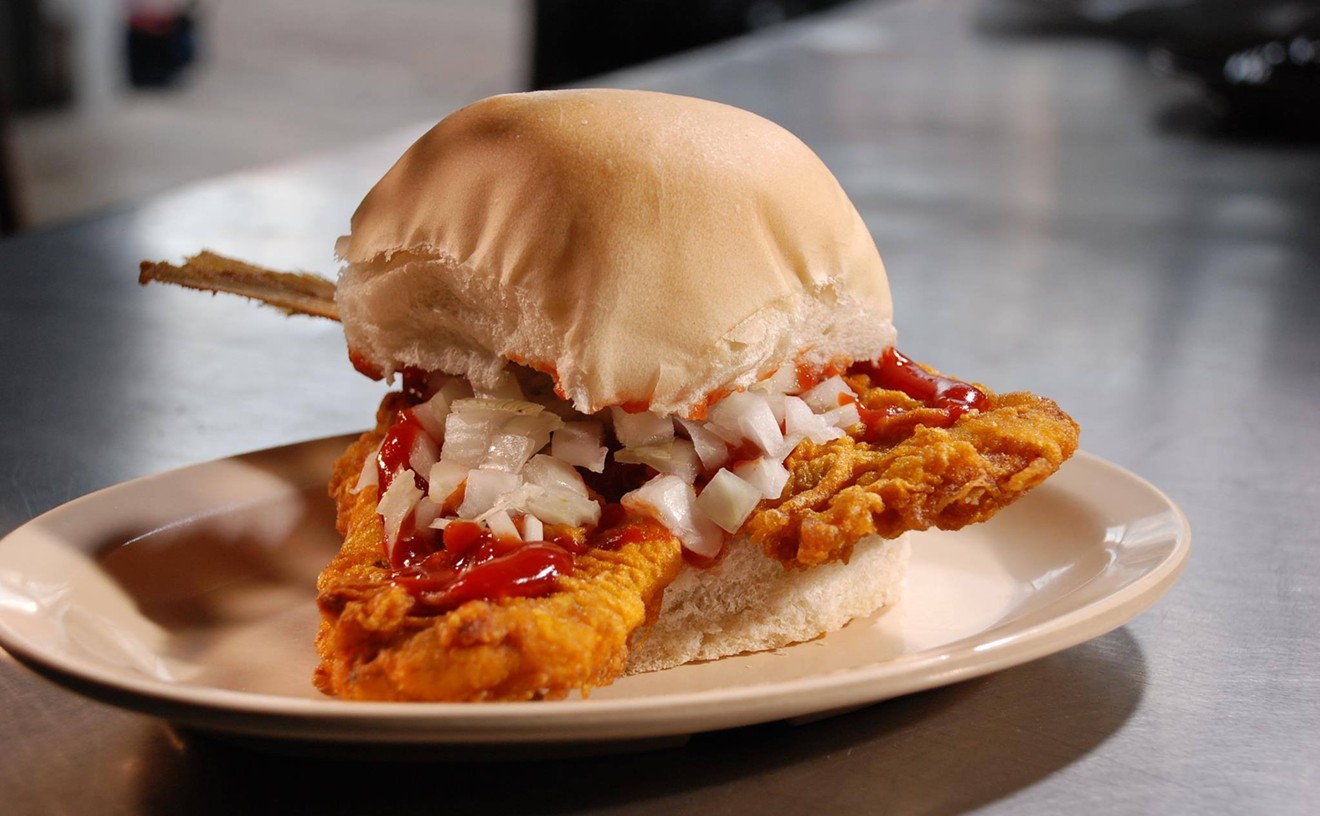 If you like seafood, La Camaronera should be your new favorite fish spot. The entire menu is seafood, from the shrimp empanadas and grouper soup to breaded lobster and fried whole fresh fish of the day. It's all thanks to the Garcia brothers; 11 of them were born into a family of fishermen in the province of Las Villas, Cuba. As the story goes, they helped their father to learn the trade — everything from catching to cleaning — and support the family. Since 1966, that same tradition continues in Miami, when Garcia Brothers Seafood was established. Once operating a fish market and wholesaler, the Garcias grew their biz into a restaurant in 1976 with the addition of a few deep fryers and a U-shaped counter where customers would line up sans seats to enjoy Cuban fish fry at its best. Sure, there are plenty of places in the Magic City to get a fried-fish sandwich, but it probably won't taste as good as the original snapper pan con minuta (market price). Forty years later, come lunch time, the dining room is still standing room only, full of patrons hungry for the house specialty, camarones fritos, the restaurant's famous fried shrimp ($9.55).