BEST SPANISH-LANGUAGE RADIO PERSONALITY Elba la Fumadora (The Pot Smoker) El Zol (WXDJ-FM 95.7) When she's not busy toking up a storm outside the studio, Elba is doing all she can to steal the thunder from Joe Ferrero and Enrique Santos, the male cohosts of Miami's funniest and most tasteless morning radio show. After Mayor Carlos Alvarez won the election, she penned and sang a ballad proclaiming herself the mother of the mayor's bastard child. When Pilar Montenegro made an appearance on the program, Elba antagonized the Mexican pop star by asking her if she was still writing bad checks. Raspy-voiced (cough, cough) and sharp-tongued, Elba la Fumadora could make the stoniest of Secret Service agents laugh with unadulterated glee. Her mayoral beau "Carlitos" should seriously consider making Elba an official ambassador: She embodies the obnoxious Cubanasa in all real Miamians. 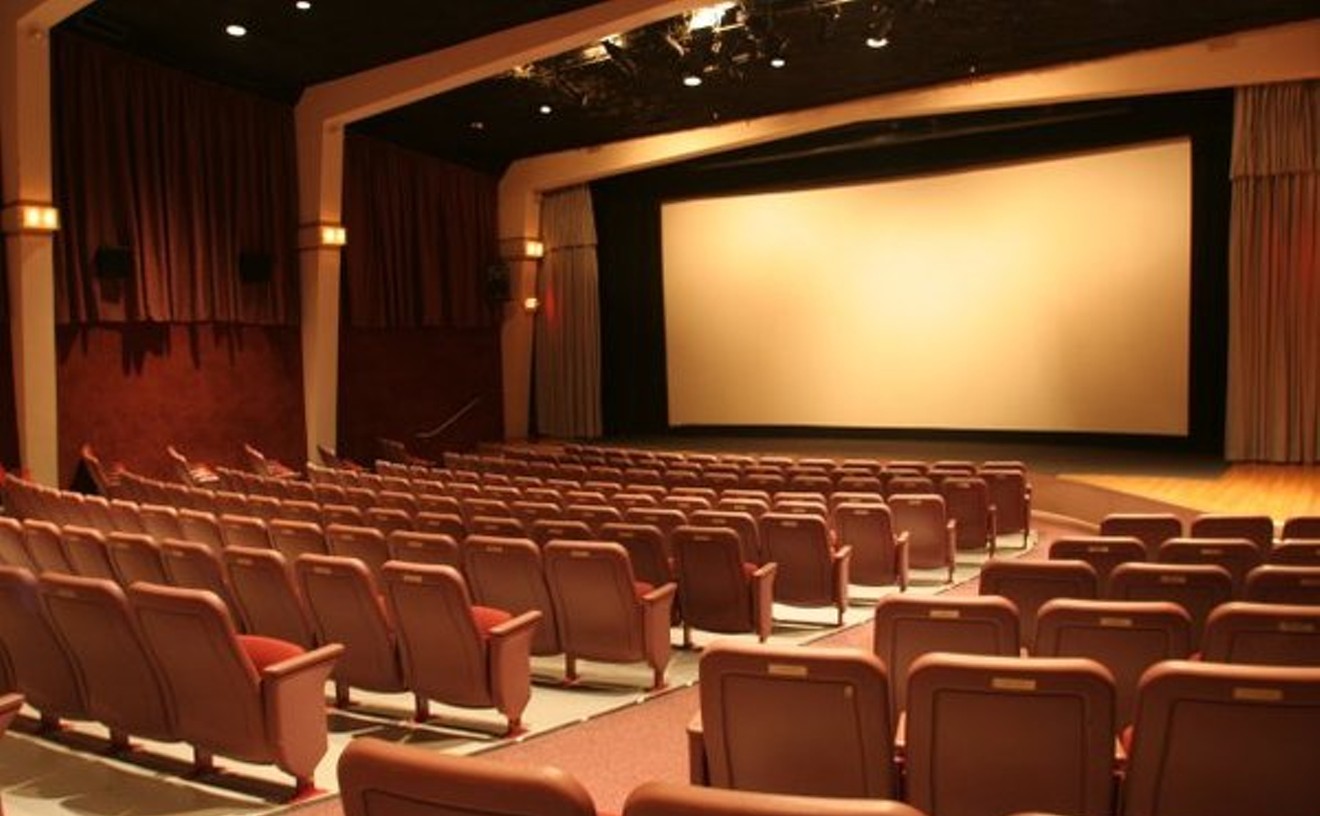 www.miami.edu/cosford Built in 1947 as the Louis D. Beaumont Lecture Hall, after a Palm Beach retiree gave $50,000 toward its construction, this theater was renamed to honor the late Miami Herald film critic Bill Cosford, a member of the school's faculty until his passing in 1994. Classically styled and housed on the second floor of the Dooley Memorial classroom building, the Cosford has served as the city's most dependable repertory house, a comfortable place to see art films, political tracts, documentaries, and other esoteric fare from around the world. Recent screenings, programmed by the university's School of Communication, have included Postmen in the Mountains, a Chinese effort that explores the bonds between father and son; the Venice Film Festival-winning Vodka Lemon, a September-December romance from Armenia; and another Venice Film Festival award winner, Light of My Eyes, an exercise in Neo-Realism. These films, screened from DVD and stock prints, are affordably priced -- a mere six dollars for admission -- and a welcome respite from predictable Hollywood spectacles.

BEST POLITICAL COMEBACK Justice Leslie Rothenberg Third District Court of Appeal Talk about comebacks! Rothenberg keeps popping up in the most influential places, defying all expectations and, some would say, reason. First she quit her job as a circuit court judge to run for state attorney. (Her tenure on the circuit court had its fair share of controversies; she had to recuse herself several times for displaying bias against defendants.) While campaigning for state attorney, she snuggled up to the Christian Family Coalition by publicly vowing to oppose while in office most anything that aided or abetted homosexuality. But alas, she was trounced in the Republican primary and limped off to the private sector. But wait! Gov. Jeb Bush himself plucked her from her ignoble fate as a private lawyer and whisked her up to even greater heights by appointing her to fill a vacancy on the Third District Court of Appeal. Her openly anti-gay position could prove troublesome as issues related to sexual orientation make their way through the court system, a prospect that apparently didn't faze the guv.

BEST MILE OF MIAMI The Venetian Causeway Yes, we know it's 2.75 miles long. It also crosses eleven islands by means of twelve bridges, two of which open for boats. It's also South Florida's oldest causeway (in continuous operation since 1926) and is listed in the National Register of Historic Places. As for its length, just pick the mile that best suits your needs. For those who seek to be mesmerized by glittering panoramas, there's no better place than the western side. Whether by bike, car, or on foot, this is the best place to take in the visual wonderland that is the Miami skyline. For those who seek to indulge fantasies, the eastern section allows for up-close views of luxurious yachts moored at million-dollar homes -- the perfect place to dream of what could be. In fact it was an indulgence of fantasy that created the Venetian. The islands didn't even exist when the causeway was conceived, a detail that didn't stop Miami dream merchants from selling submerged home sites; and the destination -- Miami Beach -- wasn't much more than a sandbar ringed by mangroves. To traverse the Venetian Causeway, then and now, is to blur the line between reality and imagination.

www.biscaynenaturecenter.org South Florida's splendid weather encourages people to play hooky, and it's a clever Miamian who figures out a way to do it without guilt. The Marjory Stoneman Douglas Biscayne Nature Center is a grand schoolhouse integrated with the great outdoors. The wonderful complex is set against mangroves, nature trails, and even a fossilized reef that make this not-for-profit facility a unique learning center instead of merely a playground. (If you are learning, can skipping a regular class or a day at work be all that wrong?) Guides lead tours through the various environments native to the area while instructing visitors about topics mostly having to do with conservation of natural resources. Some educational displays, exhibits, and art are housed inside, so even bad weather isn't a problem.

BEST DISPLAY OF WEALTH Leonard M. Miller family The current building and real-estate boom has been very good to Miami-based Lennar Corporation, the nation's premier home-construction company, which is now pulling in more than six billion dollars in annual revenues. This past December the family of company founder Leonard Miller, who died in 2002, donated a whopping $100 million to the University of Miami's medical school, now renamed the Leonard M. Miller School of Medicine. It's the biggest gift in UM's history, and it says "We're filthy rich" in a very classy way.

305-576-6377 Between hurricane threats and last-minute schedule changes, this wasn't the Cat's luckiest season. But it remains the most interesting and original theater company in South Florida. The acting ensemble, which works out of the Miami Light Project's Light Box studio, is particularly notable because the members concentrate on shows for young adults, a vital audience that virtually every other theater company in these parts ignores. They also write much of what they produce and perform. The Cats take chances with every show, and the result is fresh and full of risks that pay off.

BEST CRIMINAL CONVICTION IN THE PAST TWELVE MONTHS

BEST CRIMINAL CONVICTION IN THE PAST TWELVE MONTHS Philip Gratz Hey, dummy, stop shaking your head in wonder at how wise guys end up with million-dollar homes, luxury cars, and extravagant vacations. Here's how: They spend other people's money. Feel stupid? At least you weren't among the boneheads across the country, three of whom resided in South Florida, who sent some $8.9 million to purported stock investor Philip Gratz from 1998 to early 2003. (Apparently they weren't aware that in 1995 Gratz was convicted of scheming to inflate the stock price of a Miami-based luxury-boat-rental company by falsifying its financial records.) Operating out of suburban New Jersey, Gratz lured his victims by promising unbelievable profits: 25 to 50 percent. He lived the good life until his arrest in January 2004. According to the 24-count indictment, he "misappropriated" more than three million dollars in investor funds for a fancy home, real-estate investments, two Mercedes Benzes, artwork, jewelry, watches, home furnishings, a vacation in St. Barthelemy, cruises, limousines, restaurants, designer clothes, retail purchases, and more. Assistant U.S. Attorney Richard Hong persuaded a Miami jury to convict Gratz. This past November a local federal judge sentenced the 40-year-old hustler to a little more than seven years in prison and eight million dollars in restitution. Seven years of splendor in exchange for seven in prison and a ton of cash. Not a great investment. Now who's feeling like a dummy?

BEST LOCAL WRITER Thomas Harris The creator of one of modern fiction's most deeply etched, enduring, and beloved -- if that's the right adjective to describe a cannibalistic serial killer -- characters lives right here, somewhere in Miami-Dade County. Thomas Harris, the author of four novels, three of them devoted at least in part to the escapades of murderous psychiatrist Hannibal "The Cannibal" Lecter, is extraordinarily reclusive. What is known is Harris's painstaking attention to realistic detail; he spent nearly six years trailing FBI profilers in Quantico, Virginia, and studied the case histories of hundreds of criminally insane killers before Red Dragon was published in 1981. Less widely praised is the author's vivid, expressive wordsmithing, which far exceeds the standard of even good police procedurals and is less evocative of the hardboiled street toughness of James Elroy than it is the nightmarishly gory surrealism of Edgar Allan Poe and Clive Barker. It's a prose style made outstanding by an omniscient narrator's keen observation of personal details and nuanced behaviors -- the very foundation of the study of abnormal psychology. Jonathan Demme's cinematic adaptation of the second Lecter tale, 1991's The Silence of the Lambs, cemented the psychopath's role as an American horror genre figure. Ted Tally's script was awesome, but some of its most lingeringly piercing phrases came directly from Harris. When Hannibal Lecter first meets the fledgling but capable FBI agent Clarice Starling, his insult isn't macabre, merely cruel, but nearly feminine in its precision: "You know what you look like to me, with your good bag and your cheap shoes? You look like a rube. A well-scrubbed, hustling rube with a little taste ... you're not more than one generation from poor white trash." Starling eventually earns Lecter's support in her casework and even his affection -- a dubious achievement -- but Harris eschews happiness for his protagonists. At the conclusion of Hannibal, Starling ends up dining on fava beans, Chianti, and a human liver with Lecter; an earlier hero, Jack Crawford, is also driven to a desperate breakdown. Peter Webber, who made Girl with a Pearl Earring, is preparing to shoot Young Hannibal in Prague while Harris is writing the novel Behind the Mask, which will be published this fall. The characters in the Lecter series have no connection to Florida. However, in Harris's first book, 1975's Black Sunday, Palestinian terrorists and a disgruntled military veteran create chaos at a Super Bowl held at the Orange Bowl.