BEST LOCAL LATIN BAND Locos por Juana www.locosporjuana.net The nine-member collective known as Locos por Juana, which recently released its second album, Música pa'l Pueblo, isn't a typical Latin band. The players have a strong pop sensibility, mixing salsa, timba, ska, reggae, and merengue beats into an accessible but high-spirited blend. The result can be exotic and wildly unpredictable, a nonstop party sound that shifts moods by the minute. Locos por Juana's live show is even crazier -- nine guys on a small stage (joined by frequent musical guests) dancing around and rocking about, jumping and jamming until the audience can't help but share in the fun.

BEST LOCAL JAZZ ARTIST José Negroni After teaching for seventeen years at the prestigious Conservatorio de Música de Puerto Rico, pianist José Negroni moved to Miami. In 2003 his trio released its first CD, Naturaleza/Nature, followed last year with Piano-Drums-Bass (both on Universal Latino). As part of a new wave of Puerto Rican musicians whose music goes beyond traditional salsa forms, Negroni and his band, which includes his equally virtuosic son Nomar on drums, combine a hard postbop style and a lyrical classicism with their Latin roots. It's a little Chucho Valdes with a bit of Chick Corea. And while Negroni's music has been gathering critical acclaim on a national scale, he can still be heard pounding the keys at local jazz joints like Van Dyke Café.

BEST LOUNGE ACT Rose Max Brazilian chanteuse Rose Max has been around for years, singing in clubs like Van Dyke Café and Jazid and frequently backed by the Don Wilner Quartet. The product of a long line of Rio de Janeiro musicians, Max moved to Miami twelve years ago, slowly becoming a familiar and welcome presence in the all too tiny local jazz scene. Her performances are perfect for chilling in a South Beach lounge while nursing a potent caipirinha. Max somehow manages to exude both vivacity and an easy earthiness in a wide range of styles, including bossa nova and samba.

BEST LOCAL RECORD LABEL Schematic www.schematic.net Romulo del Castillo and Josh Kay operate Schematic out of a warehouse space in Little Haiti, issuing a variety of experimental electronic-music albums that veer from vaguely danceable beats to astringent, arrhythmic noise. Since its inception in 1996 Schematic has matured into a fine imprint, and 2004 was its most productive year. Among the seven full-length albums it issued were Finesse and Runway's self-titled exercise in electroclash; Secret Frequency Crew's haunting and brilliant IDM adventure Forest of the Echo Downs; and Otto von Schirach's latest splatter-punk symphony Global Speaker Fisting. These titles sold in the low thousands. While Schematic will probably never achieve major-label success, it more than makes up for it with artistic integrity.

BEST NEW MUSIC TREND Dance rock Okay, like most trends that blow up in Miami, this one isn't necessarily new. DJs at downtown nightclubs such as Soho Lounge and I/O have been mashing together tracks by rock bands such as LCD Soundsystem, electro artists such as Miss Kittin, and even uptempo hip-hop cuts by Outkast for well over a year now. Eventually popular SoBe DJs such as Mark Leventhal began doing the same thing, mixing AC/DC and Nirvana with Prince, the J. Geils Band, and the Strokes. Some jocks are better at blending genres than others; it doesn't take much talent to play the same stuff you can hear on classic-rock radio. But give this fad credit for inspiring people to expand their minds beyond hip-hop and progressive house.

SECOND BEST CONCERT OF THE PAST TWELVE MONTHS

Wilco at the Pompano Beach Amphitheater

SECOND BEST CONCERT OF THE PAST TWELVE MONTHS Wilco at the Pompano Beach Amphitheater It was difficult to tell who was more perplexed by the size and passion of Wilco's crowd: the band's singer Jeff Tweedy or the Pompano Beach Amphitheater's security guards, who spent the early part of the evening shooing audience members away from the stage and back to their seats. Finally, with obvious bemusement, Tweedy urged his screaming fans to "come on down," Let's Make a Deal-style, and the 2500-strong crowd did just that, surging up out of their chairs and past the now-helpless half-dozen guards, creating an instant general-admission concert. Wilco has had that kind of effect on listeners these days, and based on that night's performance, it's not hard to see why the band has moved far beyond its cult following. What was once a solid alt-country outfit has grown into a purveyor of sublime pop, albeit one whose sing-along choruses are filled with paeans to clueless theologians, collapsing buildings, and guilt-laden drug deals. As for those Beatles-esque melodies, they're similarly filled with a cockeyed spirit, one apt to erupt into a speaker-shredding guitar solo that threatens to derail the entire song. Likewise, while Tweedy himself never shies from reaching for that perfect note, his voice is prone to cracking along the way, aching satisfyingly. The Wilco guys certainly remain dark-horse candidates for rock and roll stardom, but it's that very off-kilter sensibility that makes their music so memorable. 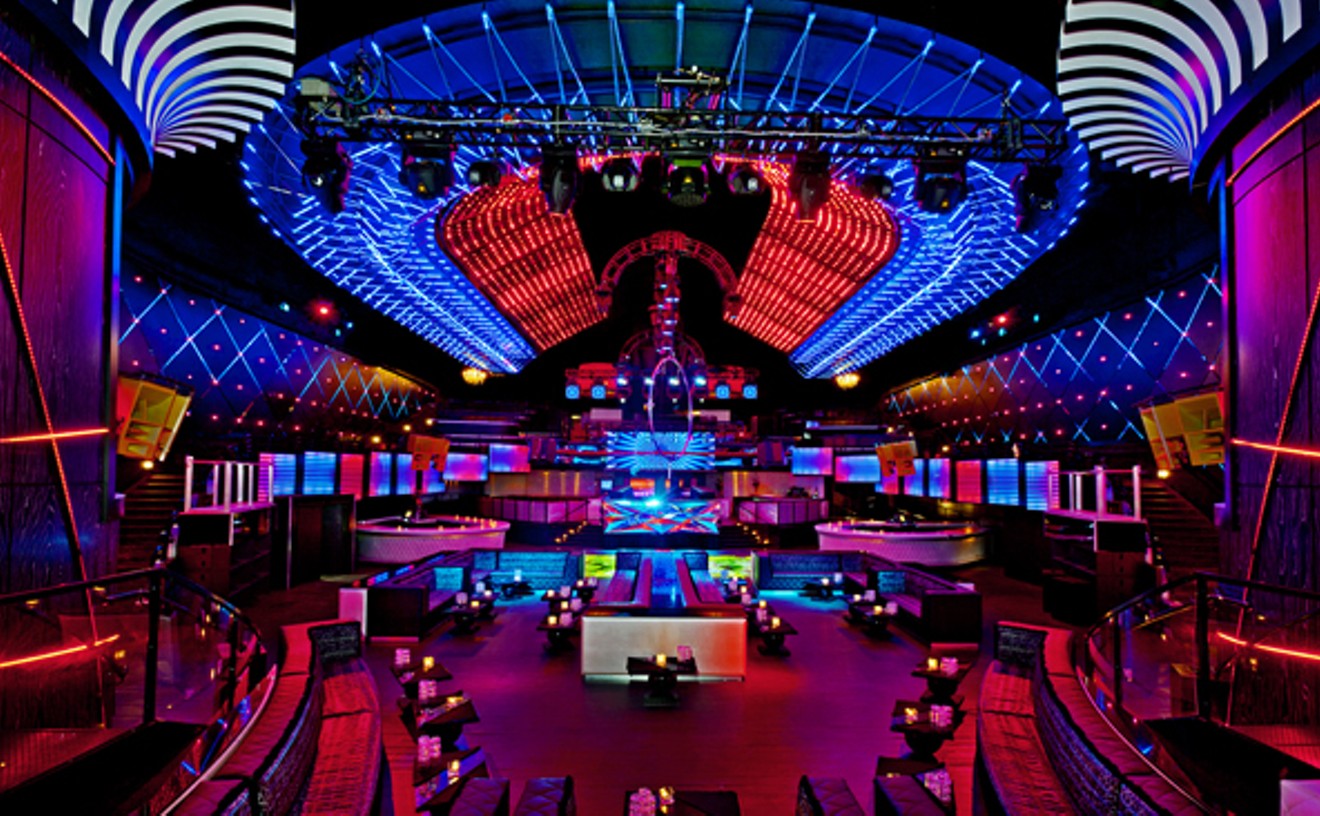 www.mansionmiami.com After Level was purchased by the Opium Group, renovated, and renamed Mansion, this linchpin of South Beach nightlife has become the place for excited celebrity-seekers thanks to the many models and hip-hop stars it draws. It also has frustrated those gawkers with its strict velvet-rope policy. Lost in the commotion is the fact that it is a superior music venue, capable of holding 2500 people throughout its two floors and four rooms. Since its March 2004 opening, Mansion has hosted an amazing concert by hip-hop band the Roots; a raucous performance by hard rock supergroup Velvet Revolver; and Hip-Hop Fridays, an occasional concert series co-promoted by Empire Events and featuring old-school rap legends Big Daddy Kane, the Jungle Brothers, and Black Sheep. With a mixture of plush seating and standing areas and an excellent lighting and sound system, Mansion is a seeming contradiction -- a snooty SoBe club and a great place to see live bands.

BEST CONCERT OF THE PAST TWELVE MONTHS

Kraftwerk at the Jackie Gleason Theater

BEST CONCERT OF THE PAST TWELVE MONTHS Kraftwerk at the Jackie Gleason Theater It's no secret that South Florida usually gets short shrift from major touring acts, but November was a grand exception. In an amazing turn of good luck, the granddaddy of electronic/synth acts, Kraftwerk, chose the Jackie Gleason Theater for one of only five extremely rare U.S. shows; the only one east of the Rockies. The preshow electricity was already palpable when competing man-machine uniformed clones arrived to take their seats, but it really took off when the lights dimmed to reveal the technology-happy gang from Düsseldorf. Although promoting its latest release, 2003's Tour de France Soundtracks, Kraftwerk also rewarded the audience with a hits-filled show that lasted well over two hours. The instruments now are laptops. The sound was magnificent, with no distortion noticeable. Though the music was loud enough to cause temporary hearing loss, you couldn't tell until it was quiet and somebody tried to speak to you. High-definition videos were projected behind the band, adding to the already hypnotic feel of the performance. There were even some robots onstage, but it was fairly evident from the expression on the band members' faces that they still take live performances seriously and enjoy them organically.

BEST CONCERT SERIES Latin Funk Festival Two years ago Easton Bravo Productions, a partnership between Lizzie Easton and Tanya Bravo, launched Latin Funk Festival, an ongoing showcase that takes place in New York and Miami. Save for the occasional headlining act (Spanish salsa star Lucrecia headlined a Sunday on the Mile event March 6 in Coral Gables), these sporadic promotions feature innovative up-and-coming bands from both cities. While hot groups such as Suenalo Sound System and the Spam Allstars aren't wanting for exposure here, the Latin Funk Festival is all about context. By bringing the cream of Miami's crop together under one roof for a single theme night, Latin Funk Festival highlights what many Miamians should know of but often overlook: the depth and brilliance of the city's bubbling Latin scene.

BEST LOCAL ALBUM OF THE PAST TWELVE MONTHS

www.ironandwine.com There's considerable paradox in the fact that a folk poet such as Sam Beam could emerge from the land of Art Deco, Miami Vice, and Modelpalooza. Beam, known as Iron & Wine, sings of stories that take place far, in spirit if not geography, from South Beach's ostentation. His gentle voice drifts toward the pastoral terrain of Homestead and the rural parts of South Florida, and the nooks and crannies within Coral Gables and Hialeah that, on an uneventful summer day, can at least seem like the South. Beam's lyrics would be without effect if not for his skill with acoustic melodies that, like so much folk music, strike a chord both melancholy and hopeful, clear-eyed and utopian.