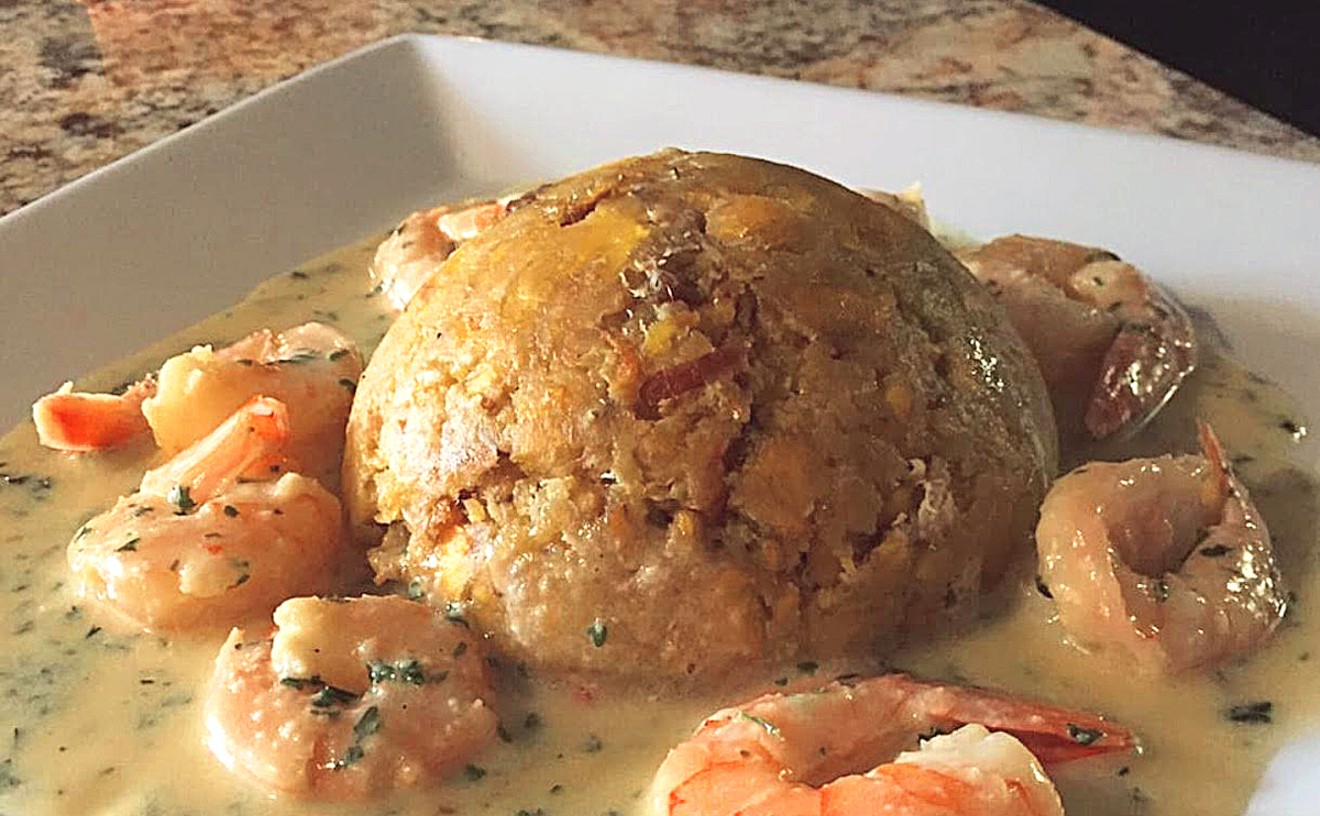 Finding a solid Caribbean restaurant in Miami is about as easy as stepping out your front door and ambling to the nearest street corner. But making truly authentic mofongo — a dish of mashed fried plantains and crunchy pieces of pork shaped into a ball — is an art form not many have perfected. El Conuquito Restaurant looks like something straight out of the islands. This colorful, family-run café has been serving Dominican and Puerto Rican classics for more than 12 years. The menu offers three varieties of the Latin comfort food, beginning with a traditional mofongo con masitas de puerco ($12). Soft, subtly sweet green plantains are mashed and rolled with tiny nubs of pork sausage and molded into a massive sphere before it's given one last dip in the fryer and served. There's also mofongo de longaniza ($12), the same dish topped with a creamy, seasoned, gravy-like caldo made from chicken stock. The dish looks more like a melting snowball than a garlic lover's dream. But the best seller by far is the mofongo de camarones ($16), served chunky with small pieces of pernil buried like treasure. It's topped with a single tender shrimp and doused in a sauce similar to the traditional al ajillo. Pro mofongo eating tip: Ask for a lemon wedge for an acidic kick and a side of bread to help soak up the extra shrimp and garlic sauce. 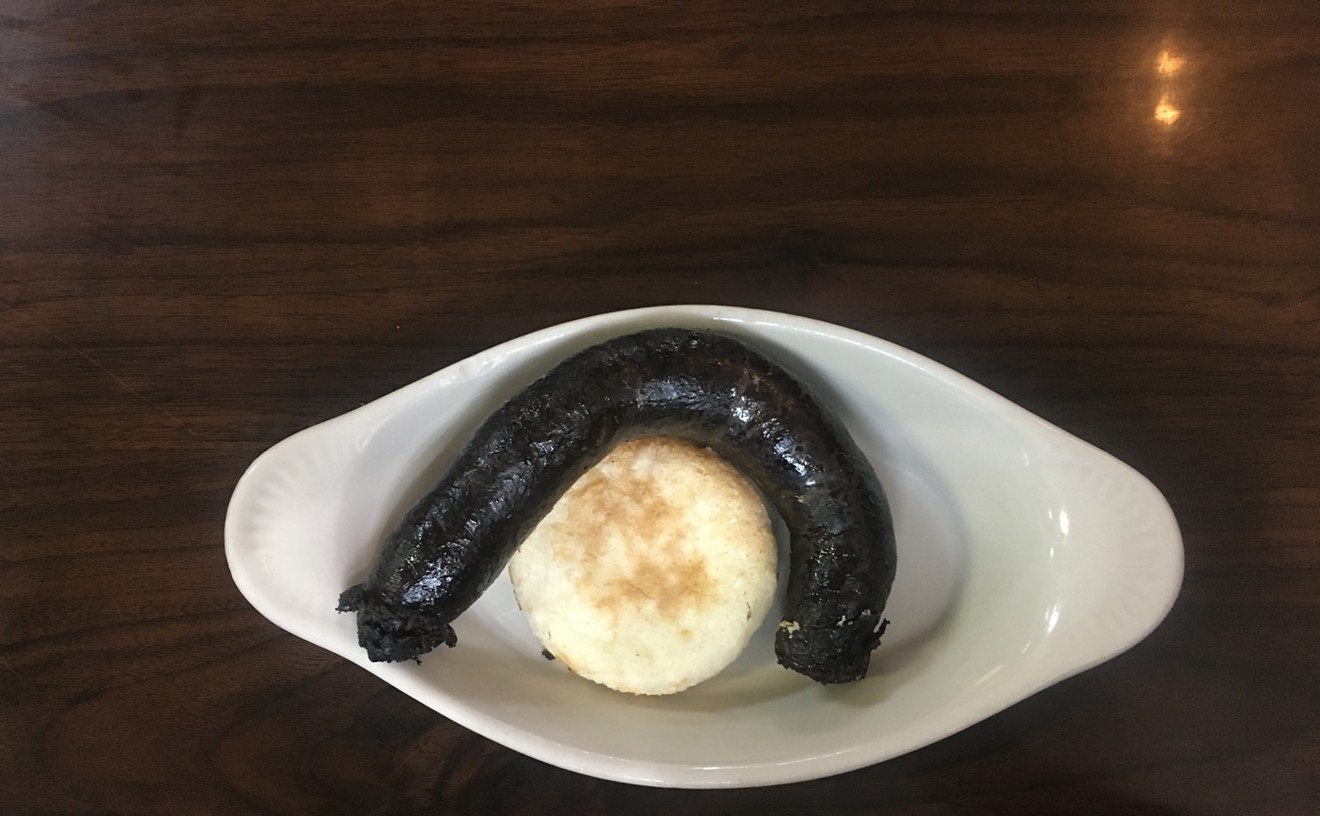 Decades ago in the city of Medellín, Isabel Amaya's grandmother used to prepare arepas on a wide metal plate, spreading the batter thin before popping it into an ad hoc oven made of stacked logs. The result was almost a pancake. "It was crispy and tender, the perfect bread for eating anything," says Amaya, whose family has run this Colombian restaurant and takeaway spot since 1997. The bumpy white arepas the kitchen grills are the next best thing to her grandmother's. They look more like biscuits than the traditional fried corn dough rounds that Colombians have created to suit Americanized tastes. They're the perfect vessel for plowing through one of Macita's homemade morcillas. There's something about the creamy, fatty blood sausage studded with rice that — when combined with the tender-inside, crunchy-outside arepa — makes each bite an escape from the noisy dining room. 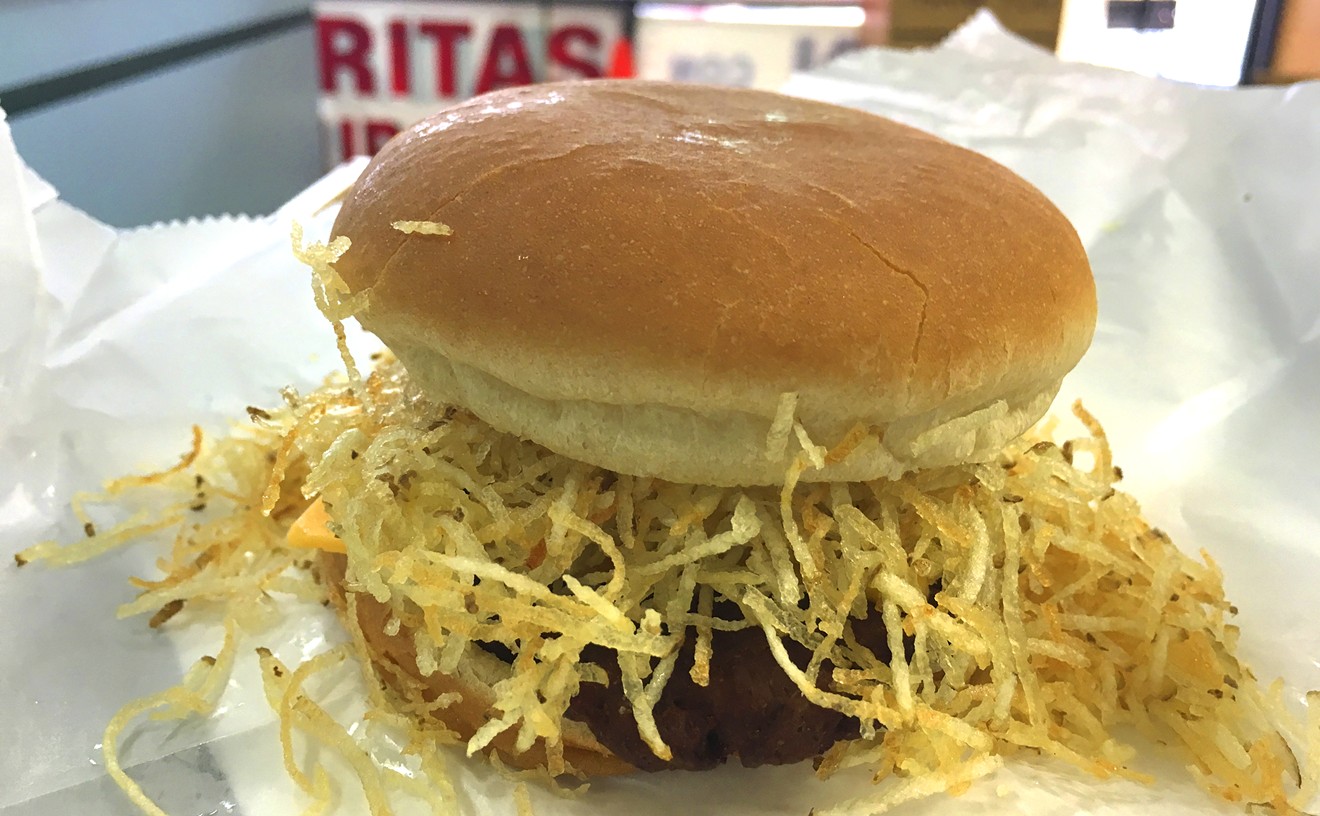 Dagoberto Estevill's frizzled potato strings place him far above Miami's frita kings and magicians. The tiny strands are like little crisp, salty capsules holding puffs of air that crunch the second you touch Dago's frita cubana ($4.50). They come showered over a perfect patty with just enough Spanish paprika to fill your nostrils with their smoky aroma — and enough grease to tie each bite together. Then the julienned potatoes come on like a summer afternoon squall, soaking up the patty's seasoning while dancing around the scattered chopped onions. How does Dago make them? He won't say. "¿Pero, te gustaria más?" he inquires from behind the chest-high counter inside his pastel-blue cafeteria, Fritas Domino la Original. "Claro," is the only reply. Pop a few sticks into your shirt pocket for a snack later on. At first blush, there doesn't seem to be a thing wrong with a baleada for breakfast, particularly when for five bucks you can snag one of the thick whole-wheat tortillas from this compact North Miami Beach cafeteria where women rightly rule. Yet consider the history of this breakfast benchmark. The chewy, pillowy tortillas are thought to have first appeared in the early 20th Century near the banana plantations of Central America. Women pushing ramshackle carts would sell them to farmworkers striking out in the hot sun for a brutal day's work. For many, the thick tortilla with perhaps a smear of black beans was all they could afford. Jennifer's Cafeteria takes some of the sting out of the story via gently fried eggs, refried black beans, and — if you like — an ultrafragrant and spicy chorizo tangled up with melty cheese. Be sure to give thanks to those who paved the way. Ceviche bowls abound in Miami's restaurants. But finding the tastiest and least fishy mixture of raw fish and seasoning is a challenge. We'll make it easy for you: Go to Doa. The Lat-Asian restaurant on Collins Avenue in South Beach specializes in Peruvian fare paired with traditional Japanese, Chinese, and pan-Asian plates. The name is pronounced dow-ah, and the place is run by restaurateur Arjun Waney, who's known for concepts such as Zuma and Coya. The traditional ceviche ($16) blends dashi — a Japanese broth — with the citrus-based marinade leche de tigre, creating a fresh flavor to cleanse your palate. A generous serving of crunchy choclo — Peruvian corn — is served alongside, giving the dish a slight smoky taste. While you're there, try the ceviche maki roll ($14), which takes the flavor of the bowl and transforms it into that of a sushi roll with leche de tigre cream drizzled on top. 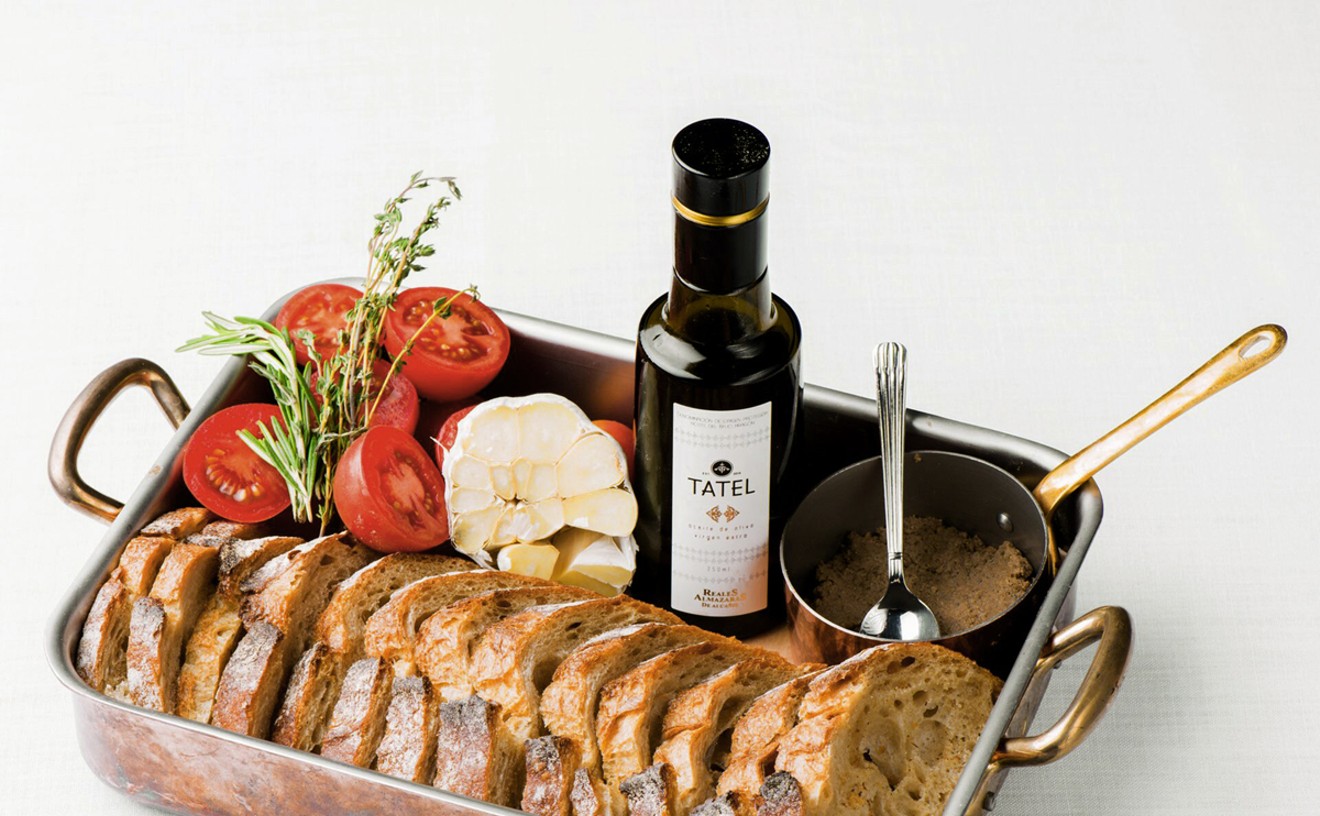 You haven't experienced gastronomic perfection until you've tasted Tatel's truffled potato omelet: a simple mixture of eggs, thin-sliced potato, and fresh-shaved black truffle. The dish, concocted by Tatel Madrid executive chef Nacho Chicharro, is drool-worthy. And now you don't have to travel to Spain, the restaurant's birthplace, to try it. Tatel Miami recently opened at the Ritz-Carlton South Beach, where owners Enrique Iglesias and two of the most important athletes in Spain's history — tennis legend Rafael Nadal and two-time NBA champion Pau Gasol — have partnered to bring the famous tapas restaurant stateside. Here, expect to find plenty of high-end, imported European products used to create the dozens of mouthwatering dishes that have made the Madrid restaurant world-famous. To carry on the tradition stateside, Tatel Miami hired former Nobu Miami executive chef Nicolas Mazier to head the kitchen. He trained for months alongside Chicharro at the Madrid location in order to deliver the secrets of Spanish cuisine to Miamians. That means dozens of hot and cold tapas, from freshly sliced gourmet Ibérico ham ($65) and Gallego-style grilled octopus ($20) to dozens of homemade Spanish desserts, including flan de queso ($11): Brie flan served with caramel and whipped cream. Be sure to try Mazier's own dishes, unique to the Miami restaurant, such as miso-marinated black cod ($38) and lightly sautéed red prawn with Spanish extravirgin olive oil and fresh garlic ($32). And, of course, you'll want to check out that world-famous potato and truffle omelet, also known as tortilla trufada ($24). Though its name translates to "the Juice Palace," El Palacio de Los Jugos offers more than just freshly squeezed fruit drinks. The restaurant, with locations across South Florida, is known for a sandwich counter that makes the most authentic Cuban sandwich in town. Made with real Cuban bread — the kind whose dough is topped with a moist leaf from a palmetto frond before it's baked — and pressed with a plancha, each sandwich is packed with ham, roast pork, Swiss cheese, and mustard. It's cheap too, ringing in at just under $10 for a Cuban and a juice. The restaurant serves a variety of other low-priced Cuban eats, including lechón asado, pescado de aguja with yellow rice, and pollo asado with a fried sweet potato. Depending upon when your craving for a Cuban strikes, prepare for El Palacio to be jam-packed. It's worth the wait, though. 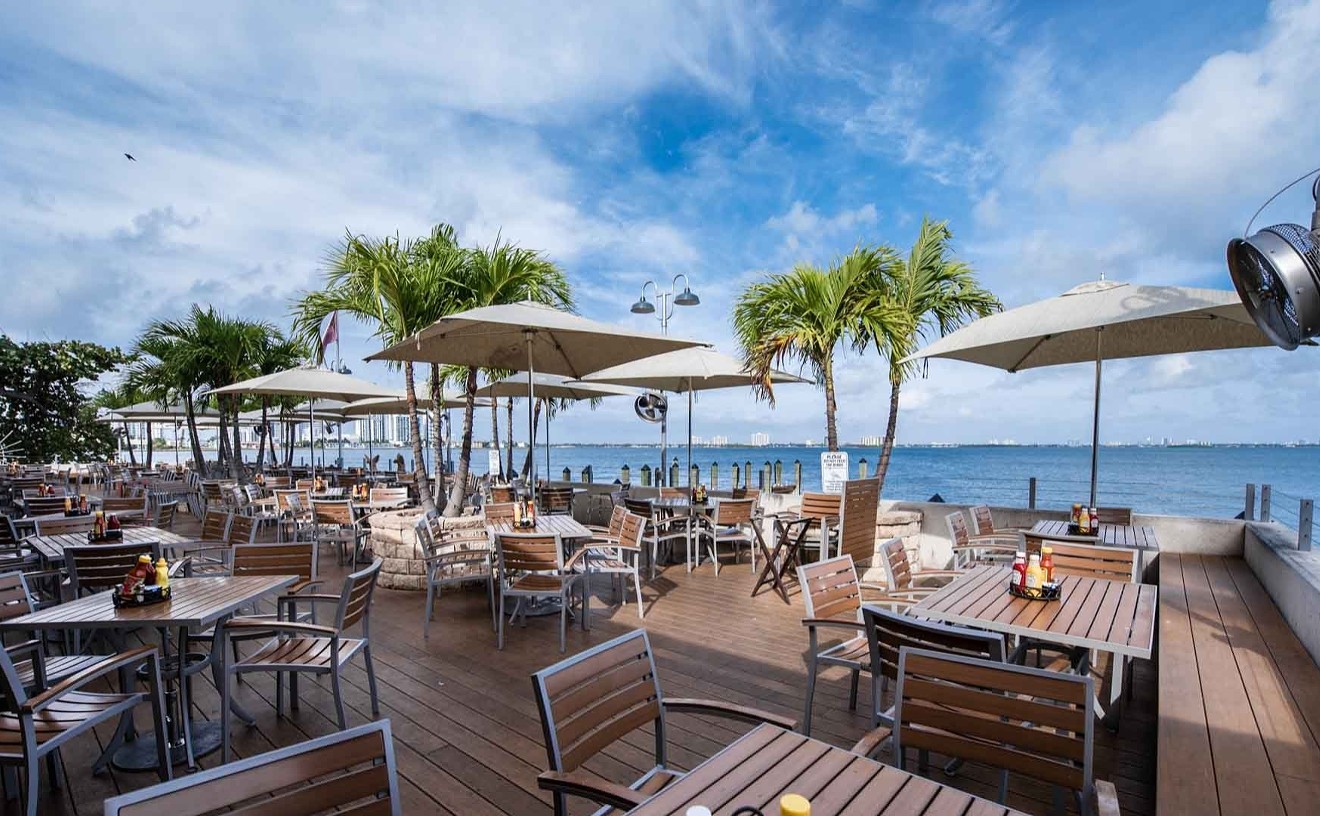 Shuckers' deck tragically collapsed in 2013, sending more than two dozen people to the hospital. Then, in 2016, the restaurant and adjacent hotel were sold to a Montreal-based holding company. Yet unlike so many other iconic hangouts that have been purchased and died, Shuckers can't be stopped. Perhaps it has something to do with the wings. Order a dozen of them ($15) for your wing-fanatic friends and they'll agree there's no need for frying or vinegary hot sauce. Shuckers gets the job done with a secret seasoning that includes the perfect amount of salt and heat. A dance on a hot grill chars the outside, providing a crisp exterior encasing luscious meat. Of course, these wings are made even better by the sun, the salty air, and the sound of waves gently lapping against the seawall of a place that time seemingly can't beat.

A good bowl of pho isn't hard to find, but a great one is. Pho, in general, is a gift from the heavens. It's difficult to mess up rice noodles swimming in a deliciously complex broth with your favorite cut of meat playing hide-and-seek beneath bean sprouts and leaves. What sets a bowl of pho apart from the rest, though? Authenticity. Saigon Cuisine serves a piping hot bowl of pho that is as close to a plastic stool on the side of a Ho Chi Minh back street as one can get without a plane ticket. Saigon Cuisine's pho comes in many shapes, sizes, and forms (cup for $4.75, extralarge bowl for $11.30). You can order chicken, beef, seafood, or veggie varieties. The common denominator in each variation is the deep-flavored broth. The husband-and-wife team of Dung and Mai Lan are from Vietnam and have spent the past two decades perfecting their recipes in America. If the pho isn't enough to make you feel like you've taken a day trip to Southeast Asia, the decorative traditional Vietnamese atmosphere, complete with a full band on a stage, will. When it comes to pho, the closest you'll get to the real thing is right on 441. Hours are 10 a.m. to 10 p.m. Tuesday through Saturday and 10 a.m. to 9 p.m. Sunday; the restaurant is closed Monday.