At Coya, the stunning Peruvian spot from Zuma restaurateur Arjun Waney, there's an entire ceviche bar. Diners can grab a seat at the counter and marvel as the chefs make tiraditos, sushi, and, of course, ceviche. There are seven varieties of ceviche at Coya, including one with sea bass, slivers of red onion, sweet potato, and crunchy white corn. The base is a deliciously pungent leche de tigre, or tiger's milk, the Peruvian term for the citrus-based marinade used to cure the seafood in a ceviche. Called the clásico, it's perhaps the most Peruvian dish on the menu, and the pairing of sweet and acidic flavors is flawless. There's also a Chinese-inspired yellowfin tuna ceviche in soy sauce with sesame seeds and a rice cracker. Nothing cutting-edge here, but this raw dish is fresh and vivid. Running the kitchen is Sanjay Dwivedi, a chef whose London restaurant, Zaika, in 2001 became the first Indian eatery to earn a Michelin star. Dwivedi says the best way to experience Coya is via its $95 tasting menu, offering a half-dozen courses. Otherwise, ceviches and small plates average around $12, while main courses are in the $30 range. Gourmet food — especially raw fish — doesn't come cheap, but Coya's fare is well worth the price. 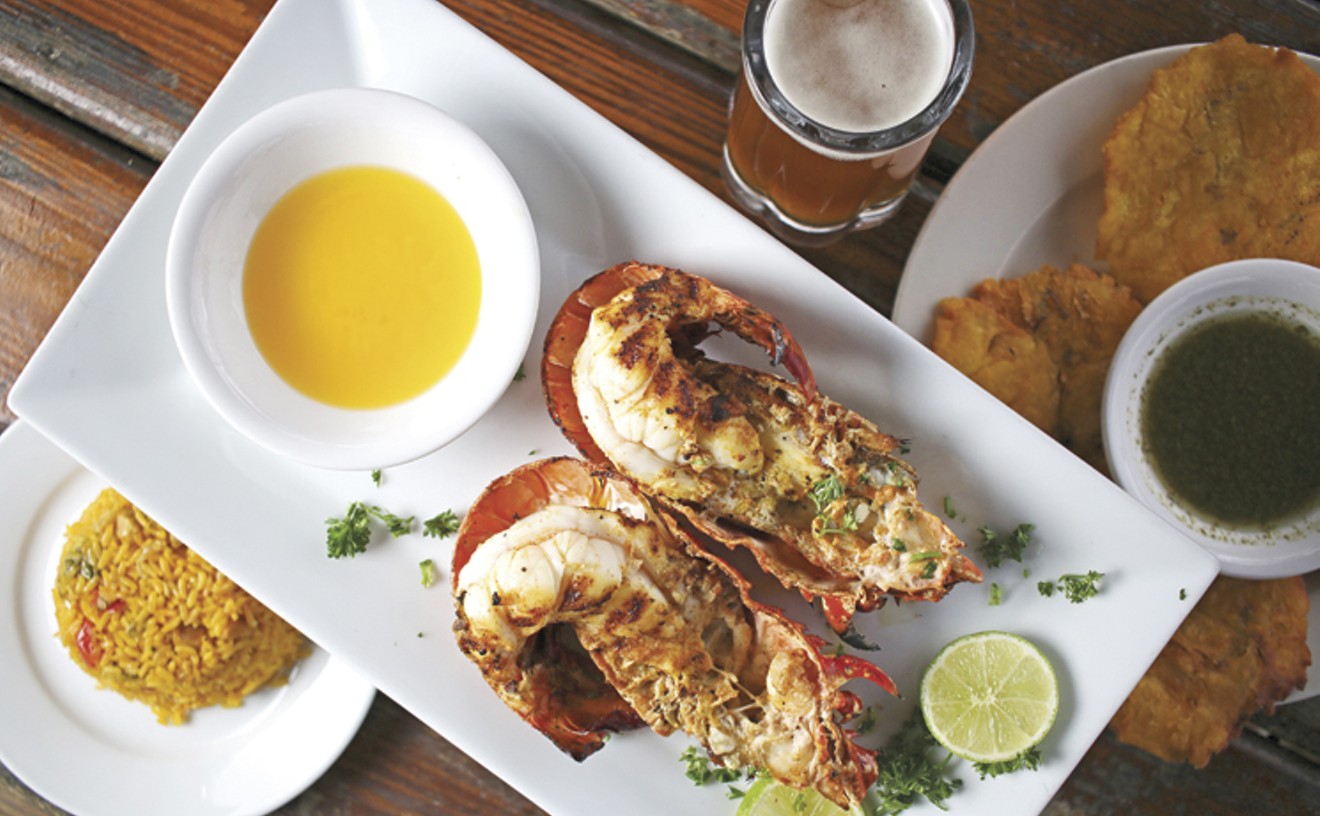 Garcia's is that quintessential Miami place where almost every Cuban can claim six degrees of separation: Maybe your dad used to sell his weekend Bimini catch to its picky owners, or your cousin David got on his feet as a waiter after landing in Miami from Havana. Garcia's is such a Miami institution that even the staunchest of developers wouldn't dream of tearing it down. The Miami River Landing is completely revitalizing the area around Garcia's historic riverside location, but this seafood restaurant and raw bar is here to stay. For more than 40 years, Garcia's has served the freshest local seafood at reasonable prices — even the stone crab is often served slightly below market value. From high-end to low-key, traditional favorites such as conch fritters ($6.95) and fried dolphin fingers ($10.95) are served alongside chilled oysters ($10.95/dozen), buttery shrimp cocktail ($7.95), and stone crabs (MP). Best of all, Garcia's famous fish dip is always a crowd pleaser, and it's free with your meal. Open 11 a.m. to 10 p.m. Monday through Thursday, 11 a.m. to 11 p.m. Friday and Saturday, and 11 a.m. to 9 p.m. Sunday.

When Captain Jim's Seafood Market Restaurant opened in 1995, only in-the-know locals flocked to the West Dixie Highway storefront for wholesale prices on fresh seafood selections from South Florida waters. Years later, the tide continues to roll into this North Miami mainstay. You can dine in on rotating daily catches that are filleted, fried, grilled, or broiled. Or you can cook a boat-to-table meal. Captain Jim's expert chefs and staff gladly offer tips and tricks on preparation. So take your time perusing freshly shucked oysters, stacked kingfish ($8.99), yellowtail snapper ($9.99), mahi-mahi ($9.99), and tuna ($21.99). It's all sold by the pound. But the main draw is the mouthwatering stone crabs (MP) that you can dip, drench in melted butter, or slather with Captain Jim's signature mustard sauce.

You don't take a shopping list to a proper farmers' market. You take your dog, your kids, or a cup of coffee. Why? Because at a proper farmers' market, the farmers — those all-too-rare souls whose sweat and love till and coax magic from the land — are the ones who know what you'll eat. These are the folks you'll find every Saturday at the Upper Eastside Farmers' Market from 9 a.m. to 2 p.m. What might be Miami's smallest market includes some of the area's finest products. The good folks from the Urban Oasis Project are on one end, tempting you with purple mustard greens and plump plantains. Their table buckles under a massive foraged jackfruit that might've crushed some unlucky passerby had it not been plucked from its tree. Across the way is Little River Cooperative, where frisée, French breakfast radishes, and napa cabbage practically leap off the table and into your arms. Out of nowhere, the recipes begin creeping in. A few days and some salted shrimp will turn that cabbage to kimchee. Slivers of that jackfruit might go well with whatever fish looks nice at Casablanca. The market has become your shopping list, and life is about to get a lot better. 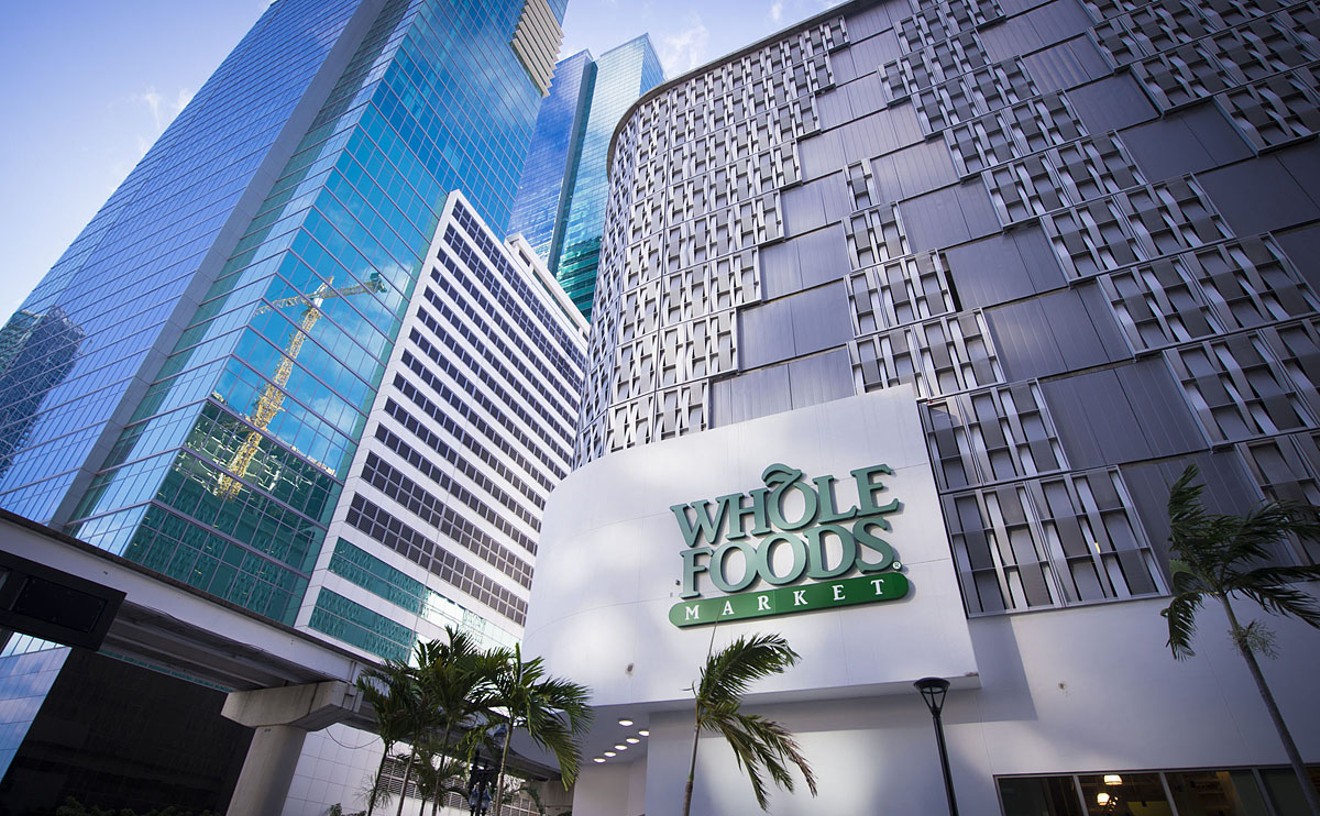 There are those who love Whole Foods Market and those who hate it. But folks who think the latter simply don't know what they're missing. For example, Whole Foods makes some of the best wood-oven pizza around, and its prepared food buffet is impressive in terms of both scope and taste. Further, the supermarket chain is committed to teaming with artisans in every location to support local communities. Thus at various markets in the 305, you can find Zak the Baker bread, Jugofresh stores within a store, sushi made by Miami-based Sushi Maki, and a plethora of other local goods. And though prices here are certainly higher than those at conventional grocery stores, it's comforting to know Whole Foods won't sell anything that has artificial preservatives, colors, flavors, sweeteners, or hydrogenated fats. What's more, the company has an in-house product line called 365, which has a lower price point than most brand names. The employees are just friendlier at Whole Foods, and there's always ample outdoor seating for shoppers to enjoy their purchases.

Little River Cooperative's fingerprints are all over town. From the garden at 27 Restaurant & Bar to the menus of Miami's finest restaurants, you've likely enjoyed Muriel Olivares and Tiffany Noe's handiwork without knowing it. Yet the heart of their operation, an urban farm, beats for you. It's the community-supported agriculture program that each year, from November through April, puts fruits and vegetables on tables across the community. One week it's blossom garlic chives, dinosaur kale, and dandelion greens. Another it's tat soi, lemongrass, and cilantro. All of them are grown by hand. That means Olivares and Noe's Biscayne Park farm is carefully weeded and tilled. When it's time to harvest, it's down on all fours. This is why so many people pony up anywhere from $500 to $700 to secure their goods each year. 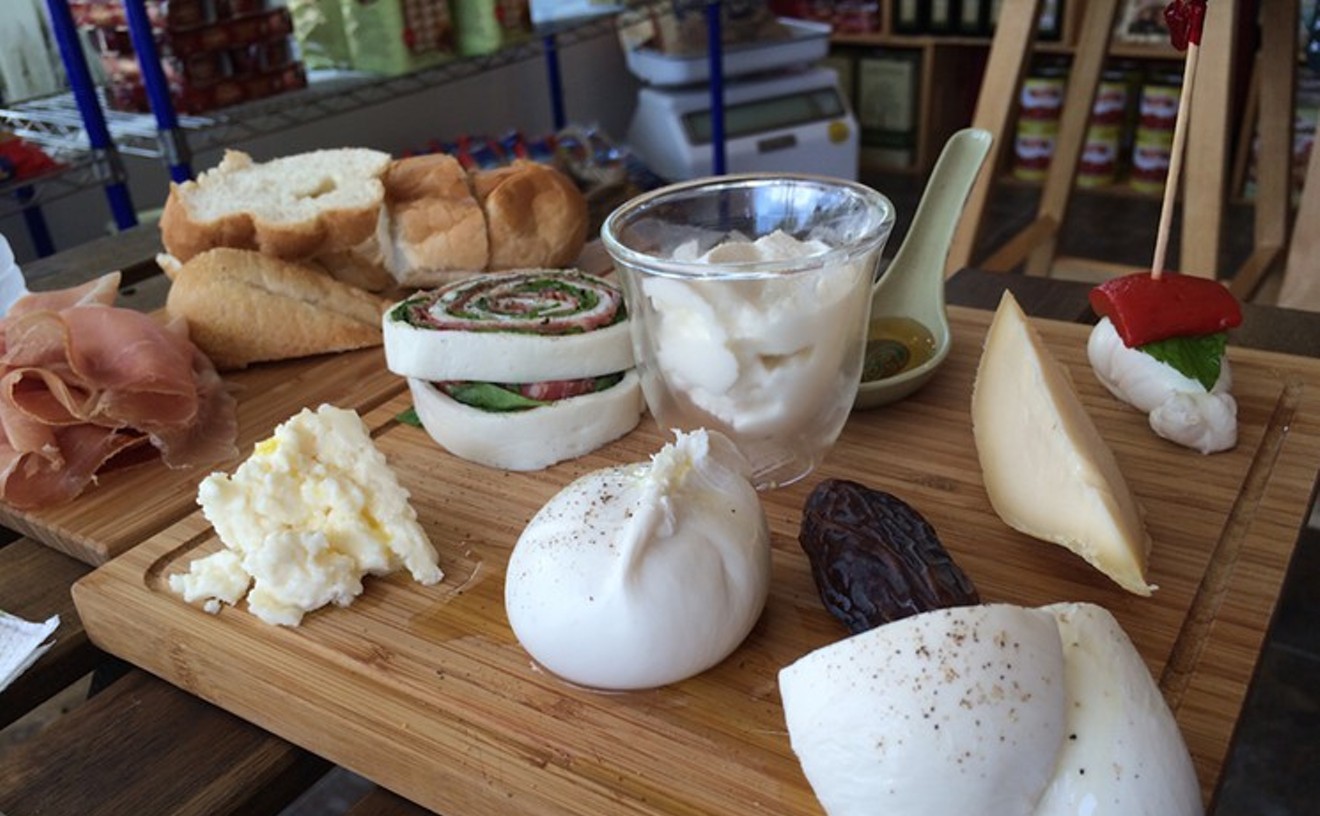 Each day before dawn, Argentine cheese man Bruno Ponce and a skeleton crew arrive at his petite North Miami shop, Mimmo's Mozzarella, to plunge dozens of blocks of Wisconsin curd into piping-hot water. Then come hours of pulling and stretching the softened cheese into milky white lobes of mozzarella and burrata. Some are wrapped in cheesecloth and hung to dry until they become the aged version called scamorza. The vast majority of them used to be shipped out to Marky's Gourmet, the Biltmore Hotel, and Miami Beach's Juvia. But in 2015, Ponce converted his once-barren storefront into a quaint café. Here, you can order a cheese board for two ($25.99) piled high with a mozzarella pinwheel filled with basil and speck, salty ricotta salata, and homemade ricotta. Figure out a way to stop by weekly. Grab a cheese board for a quick lunch and some extra for the fridge. 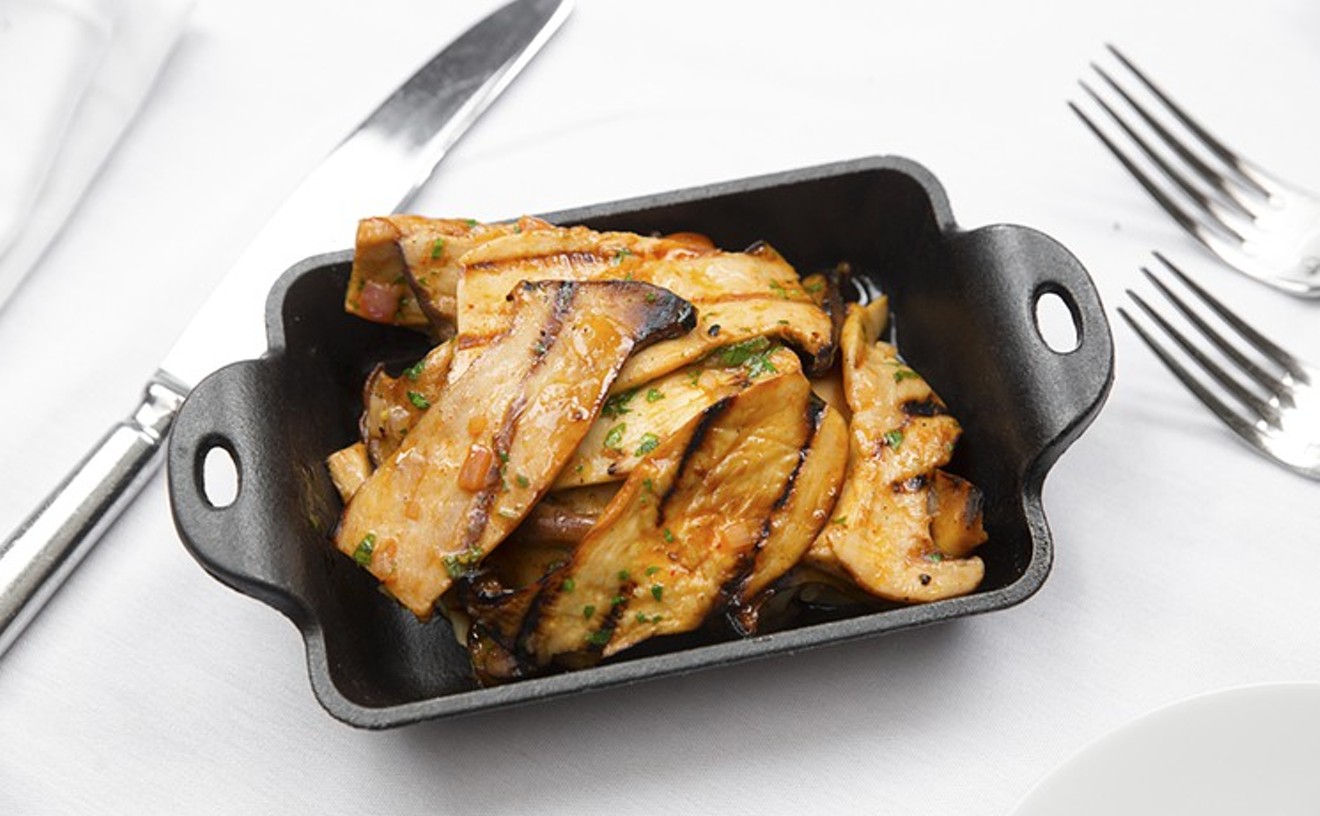 Patrick Rebholz is a master of meat. The chef who presides over Quality Meats Miami Beach, an import from New York, transforms all manner of cow and pig into otherworldly creations with little more than salt and time. He has offered smoked soppressata and calf's liver mousse. There's cured foie gras torchon and sausage infused with Cigar City's beloved Jai-Alai IPA. Try one, if you possess such self-control, for $7. Or give in to your desires and splurge on the $36 "bouquet" that offers a bite of everything. The latter is served on a suave lazy Susan decorated with house-made pigs in blankets, duck bacon, and merguez-spiced prosciutto. And this is just the setup. Once Rebholz is done wooing you with all of these intensely flavored bites, he still has a cooler full of prime beef ready to fire up and launch across your bow.

On a busy night, Perricone's becomes a waiting room for the main dining area, but don't underestimate this gourmet shop. It's a specialty Italian grocery plus a catering service, infused with the sophisticated yet casual atmosphere of its restaurant counterpart. More than 100 types of domestic and international wines line the walls, and Italian delicacies, from prosciutto to veal parmigiana, are perched in glass cases. Owner Steven Perricone played a big role in pioneering the Brickell dining scene when he opened the restaurant/marketplace in 1995 before the area underwent gentrification. More than 20 years later, Perricone's Marketplace & Café still provides high-quality cuisine and everyday convenience. "It appeals to people on the go, and it's more full-service," Perricone says of the concept, "so it hopefully services more people's needs." Specials change daily, but comforting favorites such as lasagna ($14.95) and homemade gelato ($3.95 for a single scoop) are staples. The market opens at 7 a.m. weekdays and 8 a.m. weekends. The restaurant operates Sunday through Thursday until the last seating at 11 p.m. and Friday and Saturday till 11:30 p.m. 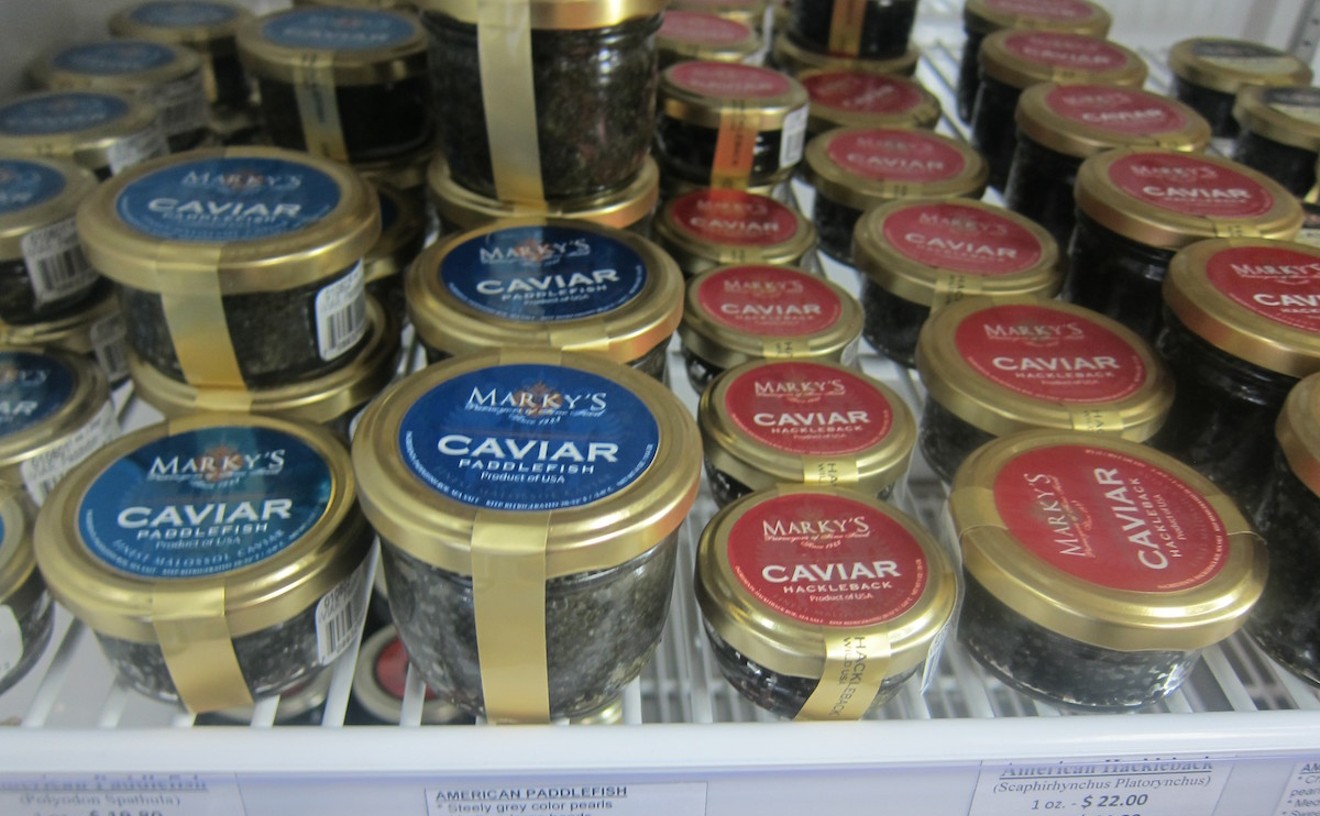 Do yourself a favor and invest in a good mother-of-pearl spoon. Why? The pricey little utensils are a must-have if you plan to savor even the least costly caviar. See, when a place serves you an ounce of the finest beluga or osetra roe with a dainty silver spoon, the easy-to-tarnish metal may impart a tinny flavor to your fancy eggs. But not mother-of-pearl. Now, with the proper tool in hand, you're ready to decide whether you want to drop $63.83 for a half-ounce of olive-black Kaluga Fusion Gold or an eye-popping $140 for the same amount of Russian Reserve osetra. If caviar isn't your guilty pleasure, Marky's Gourmet has every other stripe of sinful indulgence. Want a whole duck foie gras from Hudson Valley Farms? Yours for $148.78. A pound of dried French morel mushrooms? That'll be $266.50. Perhaps you're less flashy and like to cloak your refinement. For that, just go for one of Marky's fine cultured French butters. They're only about $20 a pound.