You're midway through an order of Le Pain Perdu ($18), otherwise known as Nutella French toast, and all of a sudden the restaurant goes dark. Large black blinds are draped over the brasserie's floor-to-ceiling windows; you're left confused and accidentally spill Nutella on your clothes. Then you hear a loud thump, followed by another, and another. Brunch at Bagatelle is more than just eggs and bacon. It's a booze-filled, DJ-spinning soirée fit for the hippest brunchgoers in town. The menu includes traditional favorites like buttermilk pancakes ($19), a spicy crab Benedict ($24), and a turkey BLT ($22). There are kettles filled with warm tea and coffee, or you can opt for spirits, including vodka. Though the atmosphere is unconventional, it's exactly what you'd expect of Miami — rowdy, boozy, and surprisingly tasty. 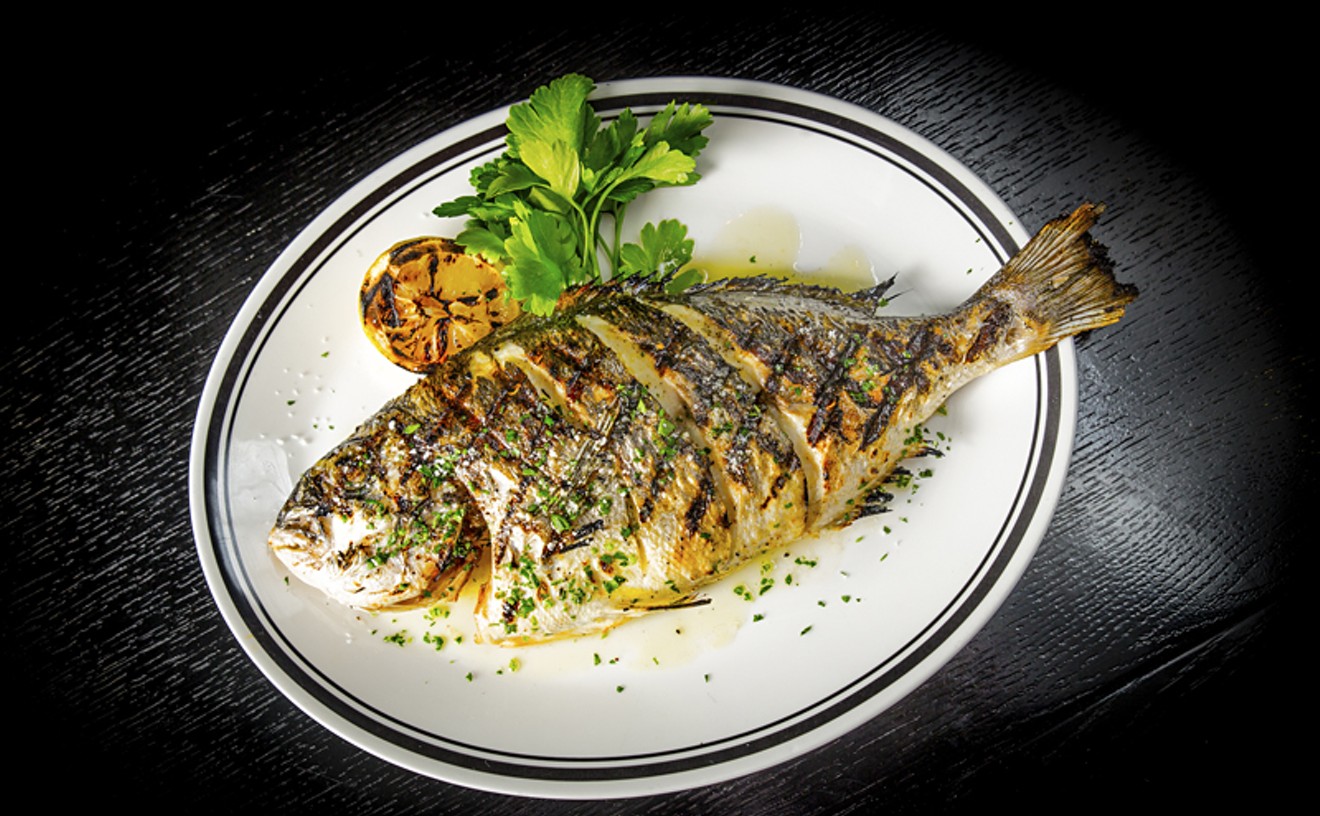 Prime Fish opened its doors more than two years ago, but it took more than a year and a half for its famed "Nemo brunch" to emerge. Nemo, the Asian-influenced seafood eatery by restaurateur Myles Chefetz, closed in 2010, and its popular brunch went with it. After a handful of years with die-hard brunchgoers wondering when it would return, the worm turned. If you're unfamiliar with what makes the weekend meal at this spot so special, think a full-service buffet serving both breakfast and lunch dishes, an entrée selection, and bottomless booze, all for $49. The buffet cold salads, freshly baked breads, meats, cheeses, and sweets. Eggs Benedict, omelets, fritatas, and raw bar selections (for an added price) are available on the á la carte menu. And that's not all. There's still a chunk of the buffet left to explore: dessert. Indulge in a medley of rotating sweets, including, but not limited to, chocolate Oreo squares, almond-caramel apple bars, homemade s'mores, chocolate coffee cake, and the signature chocolate and peanut butter bite topped with a Reese's peanut butter cup. 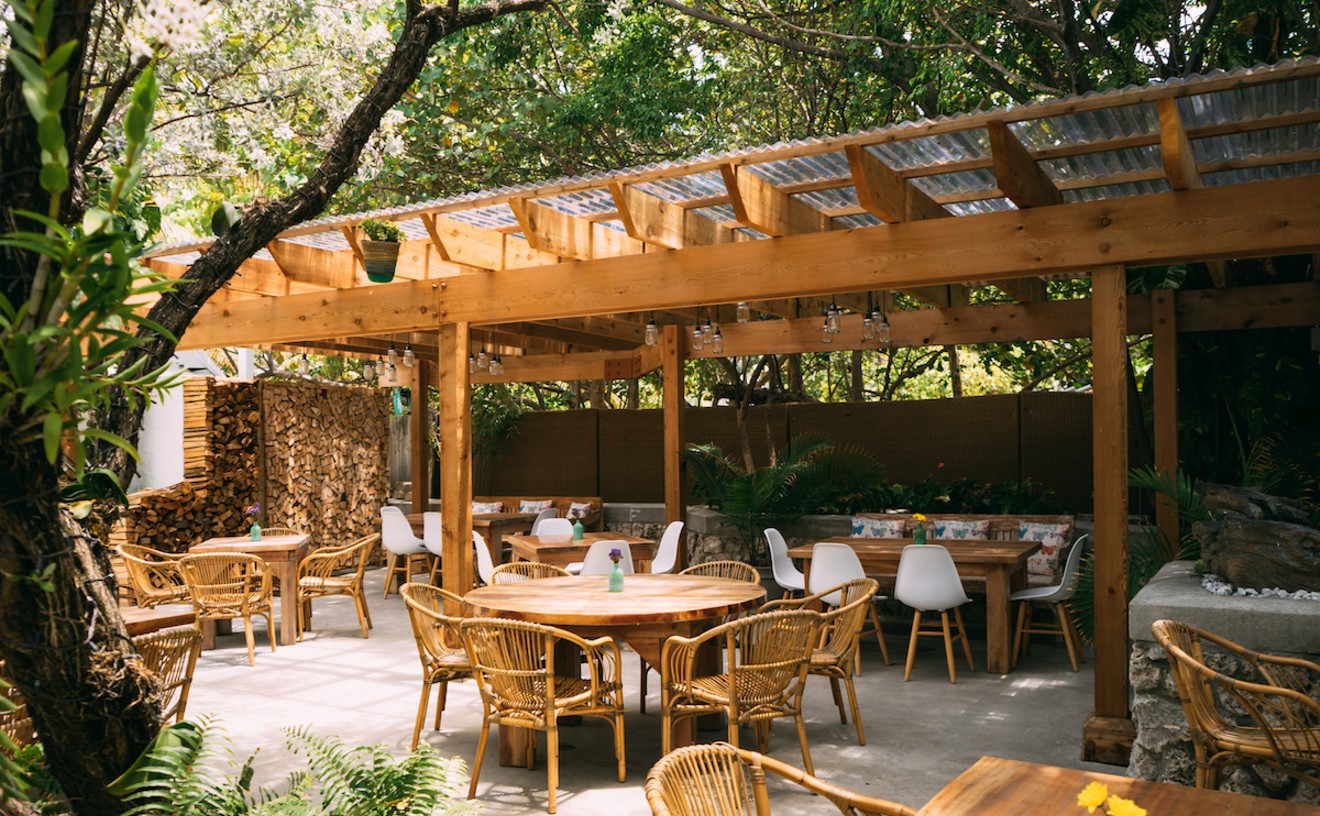 What looks like a bowl of yellow mush is actually chef Frank Ferreiro's latest brunch creation. It's called a deconstructed eggs Benedict casserole. In it, the gooeyness and taste of eggs Benedict collides with the design of a casserole, forming a flavorful and slightly messy weekend treat. It includes a Benedict's traditional ingredients, such as the egg, meat, English muffin, and lots of hollandaise sauce, but is baked in a terra cotta cazuela bowl. It's made to order and can include serrano ham, spinach, or salmon. Pair the egg-centric dish with a bloody mary from Nikki Beach's resident bloody mary bar. The plate is included in Nikki Beach's ongoing Sunday brunch buffet, priced at $49.95 per person.

Before the coffee shop came the coffee, and lots of it. Puroast, a coffee brand created in Southern California more than 25 years ago by brothers Kerry and Jim Sachs, has slowly expanded across the nation. Its Brickell location, which opened earlier this year, marks the brand's first local brick-and-mortar location, and others are expected. Puroast's coffee shop blends a classic and relaxed South American or European-style vibe with fast-paced service perfect for those on the run. Whether you're looking to get in and out as quickly as possible or want to grab a book and spend the afternoon, Puroast proudly welcomes both, which is unconventional for most coffee or bakery spots in town. Also on the menu besides the brothers' unique brews are fresh-squeezed juices, croissants, sandwiches, and salads, all under $10. Plus, there's a bevy of freshly baked breads and pastries. 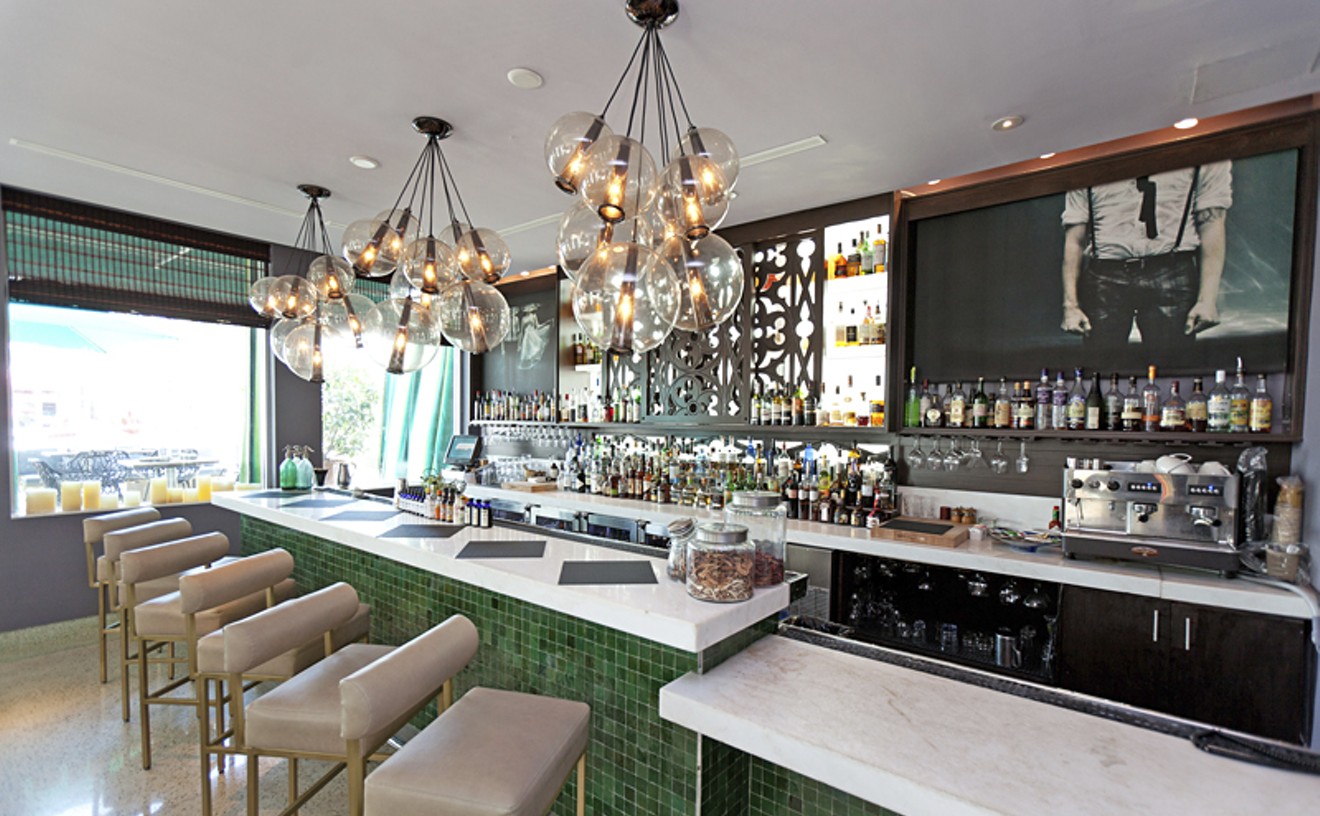 Executive chef Blair Wilson believes in simplicity. He knows how to make a straightforward brunch and prides himself on crafting plates that are approachable, relatable, and shamelessly delicious. That's where his famed breakfast sandwich ($17) comes in. It's the Social Club's bestselling plate, with about 400 orders from hungry diners each week. Wilson drew inspiration from a classic BLT but wanted to find a way to take it up a notch, which explains the spoonful of bacon jam spread across two thick pieces of challah bread. The jam is made each day from scratch and incorporates bacon, bourbon maple syrup, and coffee into a sweet and savory jelly. The sandwich itself is made with an over-easy egg, avocado, and heirloom tomatoes, with the jam smeared throughout, adding a sweet and smoky taste. Breakfast potatoes similar to tater tots are served alongside it even though Wilson's sandwich alone is enough to keep a diner full throughout the day.

Serendip-a-Tea, hidden inside a Kendall strip mall, is a scene you'd find in your favorite fairy tale. Vivid designs, playful decor, and bright colors ooze from the teahouse, which is nestled between stores in the Kings Creek Shopping Center. It's been open for a little more than a year, offering 32-plus varieties of tea, including green, white, black, and oolong. Order your choice hot or cold, in a small or large pot, or get it to go. Make it an afternoon by pairing bite-size tea sandwiches — such as egg salad, fig delight, and salmon and English cucumber — with a few cups of tea. Bigger bites, including a raspberry and goat cheese salad or a veggie burger, are offered too. Tea-timers with a sweet tooth should opt for a few freshly basked pastries like cookies, muffins, and madeleines. Everything on the menu, including large pots of tea, costs less than $11, transforming an afternoon at the storybook tea shop from a fantasy into an affordable reality. 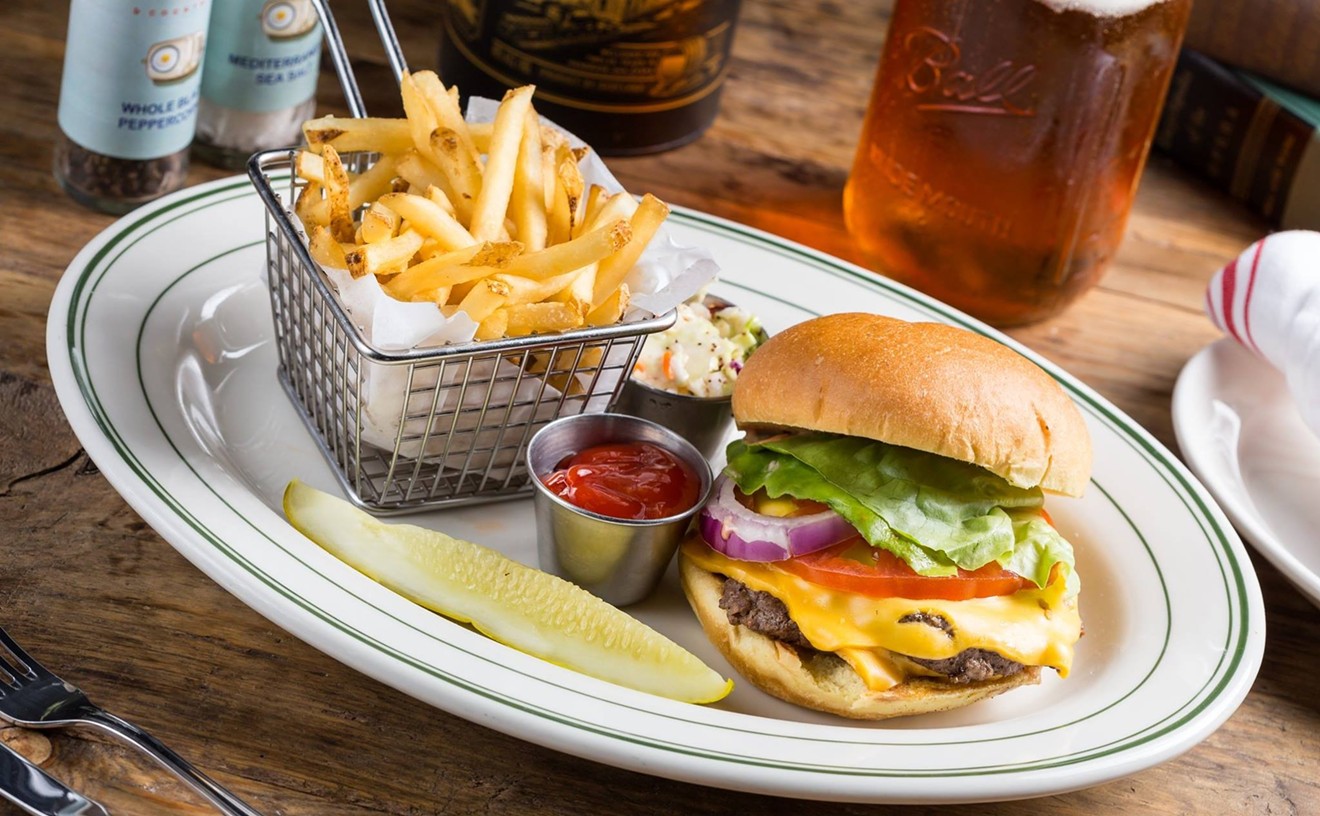 A blend of old-fashioned, trendy, and nostalgic vibes, along with comfort food, makes for the perfect diner. Wynwood Diner is a little different but somehow is still a classic. The eatery adds an artistic and swank feel. Picture it as a trendier version of your great-grandmother's living room — clean, not overly contemporary, and weirdly chic. The space is expansive, offering indoor, outdoor, and bar seating. The menu is traditional with a few twists. Dishes include brisket sliders ($11), a bacon wedge salad ($9), chicken and waffles ($14), and a bevy of sandwiches and burgers combining ingredients such as Gruyère cheese, Fresno chilies, and grilled zucchini. Be sure to pair your order with the Brussels sprouts dish ($8), one of the restaurant's bestsellers. It combines apricot, hazelnut, ginger, and orange soy into a bowl of crunchy, half-burnt sprouts. There's often a wait, so plan accordingly.

Few places in Miami have been around as long as Kosher Kingdom. And there's no place like it. Try the buttery, chocolate-laced rugelach or slices of smoked, delicious salty sable. Fred Einhorn opened the first Kosher Kingdom in 1952 on Washington Avenue in Miami Beach. It was a time when you could barely take a step without finding a kosher household. Then, as much of South Beach's Jewish community moved north, Fred's son Mike headed for Aventura. No matter where the deli is located, it's the place to be for hard-to-find classics such as mushroom barley soup ($6.99) and a half-dozen casseroles called kugel, made with noodles ($7.99), zucchini ($7.99), or potato ($6.99). Refuse to try the stuff? You might find yourself being force-fed house-made gefilte fish ($12.99) by a fawning waitress. 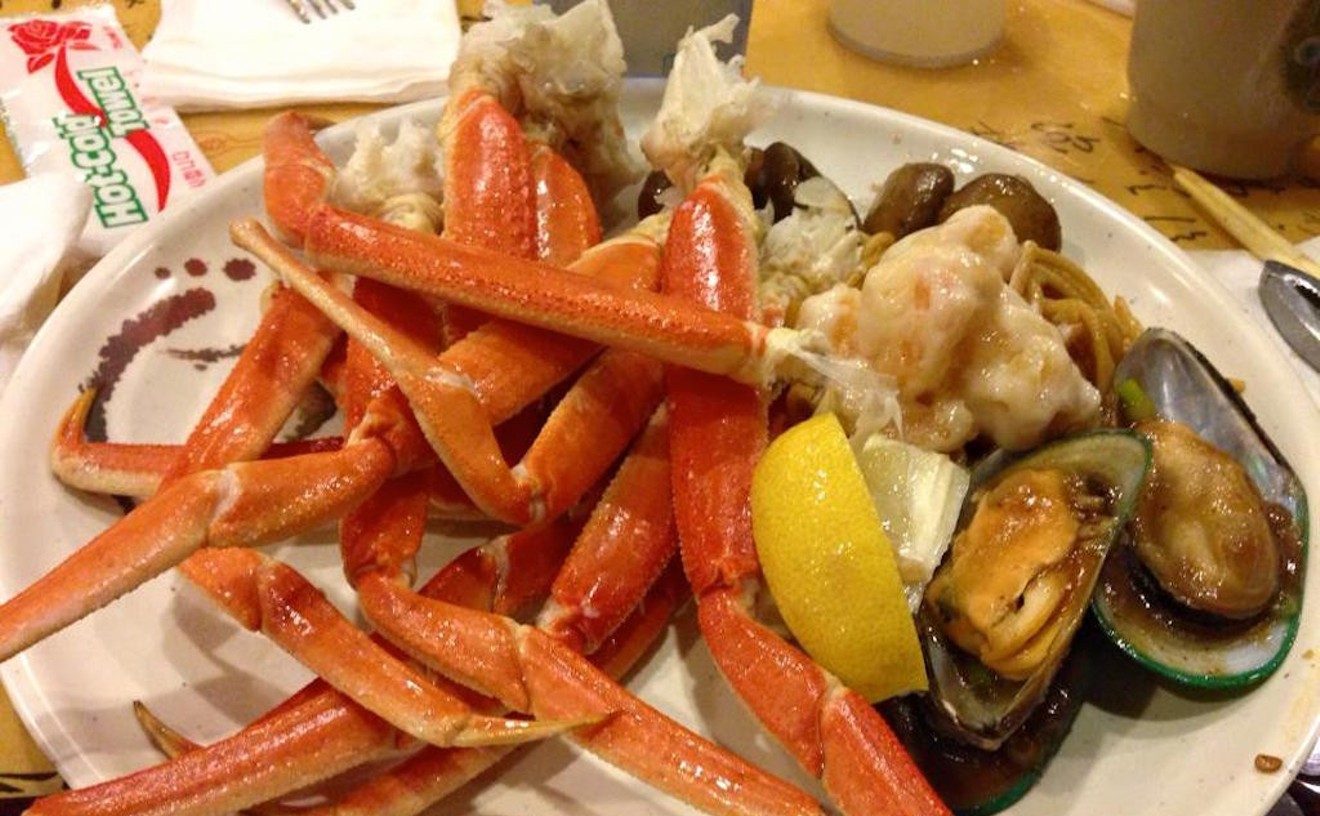 The whole point of dining at a buffet is to eat until they kick you out. So whether you need to refuel after kayaking at Oleta River State Park or desire a new celebratory spot, there's no better place than Ginza Japanese Buffet. This all-you-can-eat experience has a modern-day-cafeteria feel: pleasant and easy to navigate. Red lanterns hanging over each station guide guests to a smorgasbord of surf-and-turf delicacies. Start at the neatly arranged sushi bar manned by sushi chefs ready to restock colorful rows. Then let your nose guide you through myriad pan-Asian delights, from deep-fried sesame balls and tempura shrimp to miso-glazed salmon and lo mein. Or maybe you'll try the made-to-order hibachi station. Don't mind getting your hands dirty? Get to crackin', peelin', and slurpin' fresh crab legs, shrimp, and oysters. And if you don't have any room left for dessert, make some. Expect to pay $11.95 for lunch Monday through Friday and $12.95 Saturday and Sunday from 11:30 a.m. to 3:30 p.m. Dinner costs $18.95 Monday through Thursday and $20.95 Friday through Sunday from 5 to 10 p.m. 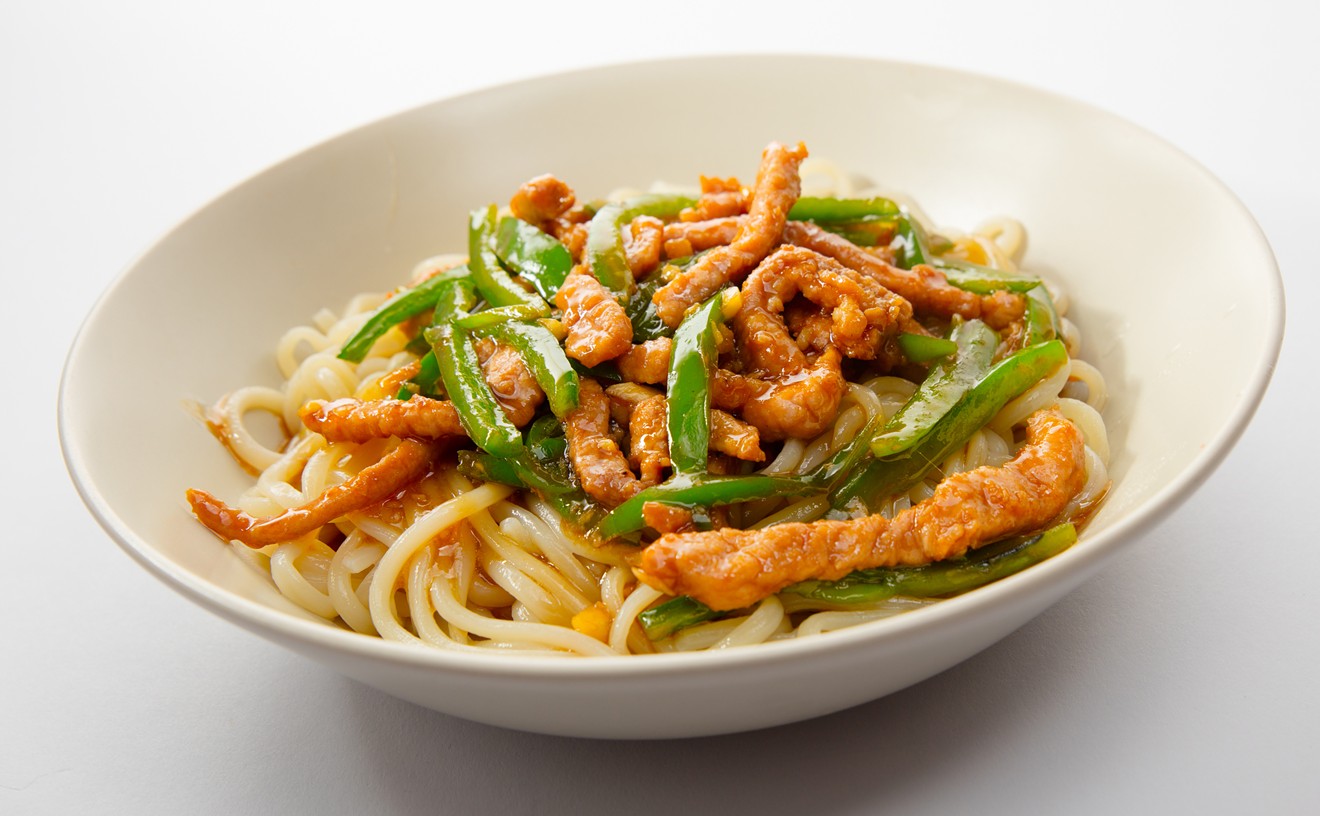 You want chilies? Alan Zhang's got chilies. The soft-spoken owner of this West Dade Chinese spot has emblazoned his walls with the fiery peppers. In the kitchen, there's a gurgling pot bearing his signature chili oil. It's filled with an unholy mountain of the firecrackers, a handful of numbing Sichuan peppercorns, sesame seeds, and star anise pods. The rest is a secret. Find it throughout his menu, adding fragrant spice to almost every dish. He spoons it over thick, jiggly noodles ($7.95) made of soybean and tapioca starch. He uses it to braise shards of fatty beef that join boiled cabbage in a ripping-hot stew ($13.95). In Zhang's crowning dish, the oil is spiked with more dried chilies and then used to stir-fry pickled string beans with garlic slivers and minced beef intestine ($12.98). Sure, there's sweat cascading down your brow, your face is on fire, and your eyes are bloodshot and beginning to tear. Most normal people would ask for a glass of water, maybe even milk, to quash the heat. But not now. Now you want more chili oil.