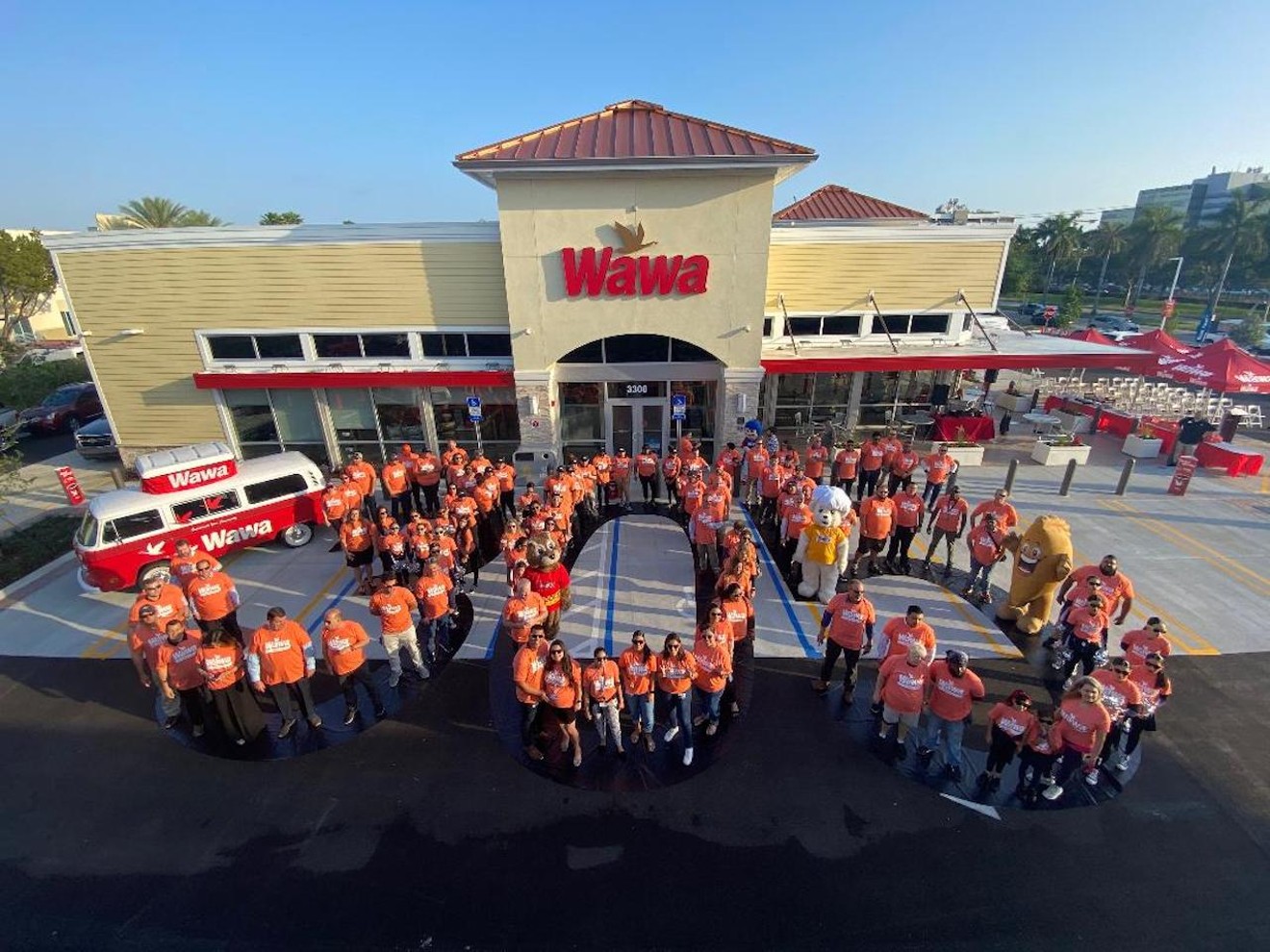 Aerial photo of Wawa employees, customers, and community partners spelling out "305" outside the new Doral location. Wawa
Wawa is celebrating its first anniversary in Miami-Dade County with a new location. Doral denizens can now make the Philadelphia-based convenience-store chain's hoagies and coffees part of their daily routines.

The grand opening of Wawa's fourth location in Miami-Dade, located at 3300 NW 87th Ave., took place early this morning. In celebration of 305 Day and the company's approaching 305th day in the local market, Wawa associates, customers, and community partners gathered in the shape of the number 305 for an aerial group shot outside the new Doral shop.

Wawa — a Native American word that describes the Canadian goose in flight — has been around since 1964 but didn't expand into Florida until July 2012. Since then, the company has launched more than 207 locations in the Sunshine State, but it broke into the Miami market only last year when it opened stores in Kendall, Cutler Bay, and Coral Way.

The newest store, located across from Carnival Cruise Line's corporate office, is equipped with outdoor community tables and bistro seating. Along with offering its specialty breakfast and dairy products, Wawa's Doral outpost will serve an exclusive hoagie: Rolling in Miami. Created by Doral and SLAM Academy students, the sandwich is a salty-spicy combination of pulled pork, American cheese, lettuce, pico de gallo, jalapeños, and Old Bay seasoning on a freshly baked roll ($2.99 for a six-inch).

"We work very hard to become a true asset to the communities where we set up shop," says Lori Bruce, Wawa's public relations manager. "Getting children involved is part of our mission to become a neighborhood and community partner. We want our customers to share their ideas, inspire their thinking, get their feedback."

Bruce notes that each store creates about 40 new jobs; after a year on the job, employees are eligible for the company's stock ownership program. Last year, Wawa was listed as one of Forbes' best employers for diversity.

"We keep associates involved in the community and encourage them to build relationships with customers," Bruce says. "As part of that effort, we support their volunteering work with nonprofit organizations such as Feeding South Florida, for which they pack up boxes for senior meals."

Bruce says Wawa intends to open 50 other stores in the Miami area over the next several years, including two locations this year: one in North Miami in April and another in Hialeah Gardens this fall.

At the ribbon-cutting in Doral this morning, special giveaways greeted the first 305 guests. A hoagie-building competition benefited local charities, and a Wawa official announced the company's sponsorship of the Wawa Book Club at a local elementary school and presented a $5,000 check to the American Red Cross.

To celebrate the new location, Wawa is offering free coffee at the Doral store for the next ten days.

Wawa Doral. 3300 NW 87th Ave., Doral; 800-444-9292; wawa.com. Open 24 hours daily.
KEEP MIAMI NEW TIMES FREE... Since we started Miami New Times, it has been defined as the free, independent voice of Miami, and we'd like to keep it that way. With local media under siege, it's more important than ever for us to rally support behind funding our local journalism. You can help by participating in our "I Support" program, allowing us to keep offering readers access to our incisive coverage of local news, food and culture with no paywalls.
Make a one-time donation today for as little as $1.
Juliana Accioly
Contact: Juliana Accioly