In the Boom Boom Room's former digs, with the help of Cocaine Cowboys producer Alfred Spellman and tastemaker Keith Paciello, a unique lounge has blossomed. What keeps this Rose from wilting are reasonable drink prices and no shortage of debauchery. Bella Rose welcomes everyone. There's no door drama. Yet it has attracted the likes of Calvin Klein, Josh Hartnett, Kirsten Dunst, and Mary-Kate Olsen. And to top it off, local scenesters Alexis Mincolla, Nick D'Annunzio, and Jochy Ortiz have given the bar's patrons further reason to visit with the Saturday party Bella Donna and the end-of-the-weekend massacre, Black Sunday.

The Viceroy wants to make sure you never have a cocktail near or below sea level again. As part of the ten-acre Icon Brickell compound and one of the newest (and most fab) buildings to spring up on the Miami skyline, this place is chic defined. The 15th-floor pool deck is outfitted with a life-size chess game, scores of cabanas, and the most breathtaking feature of all — the magnificent view of Biscayne Bay and the surrounding areas. Since no dip in the pool is complete without a cocktail, Café Icon has more brews, grapes, and elixirs than you've ever imagined. With decidedly un-Brickell drink prices — only $12 for a mojito or bloody mary — you can spend an entire afternoon tanning and bellying up to the bar. Oh, and this casual eatery offers healthful Mediterranean food poolside to soak up all of that tequila in your tummy. 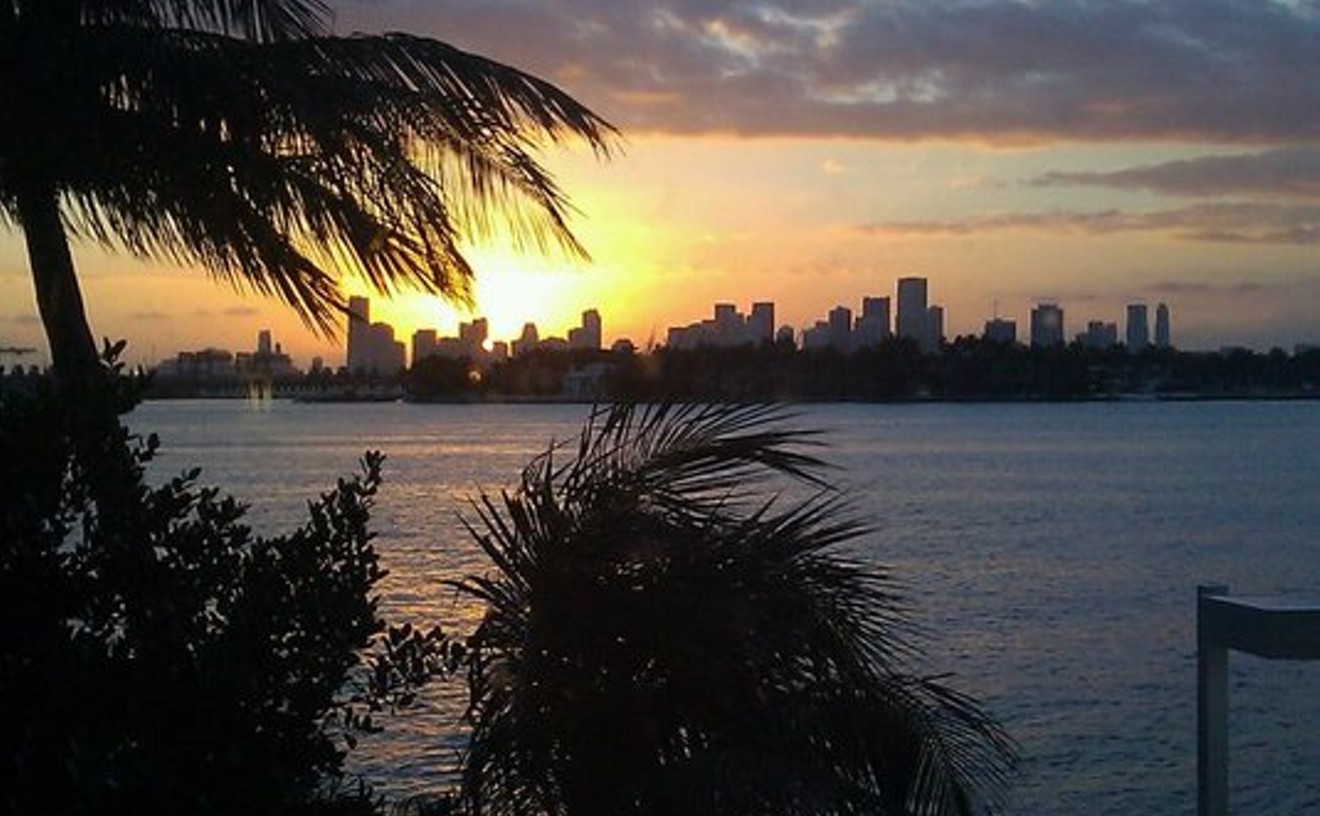 It's the kind of joint you'd see in Fight Club or a snuff film. It's hard to believe the place could actually exist. Smack in the middle of South Beach is a grimy, real-life dive bar you've never heard of.

So you check it out. You head to the Floridian, a towering condo on West Avenue located a stone's throw from the usual SoBe traffic pouring from the MacArthur Causeway onto Alton Road.

There's no sign of any kind of bar, but with a wink, the security guard out front points you toward a locked side door. You press a buzzer and gaze into a security camera on the ceiling. You're lucky. The guys inside decide you belong, the door buzzes, and you walk up a staircase and down the rabbit hole.

You immediately realize it's everything you could have hoped for but didn't dare to dream: ribbons of hazy cigarette smoke around a simple bar lined with loudly guffawing old men in white T-shirts and VFW trucker hats; yellowed murals of bald eagles and soldiers in Vietnam and WWII trenches; a jukebox spewing ' 70s rock; a tattered pool table in the corner; and Buds for $2.25 and Coronas for $2.75. 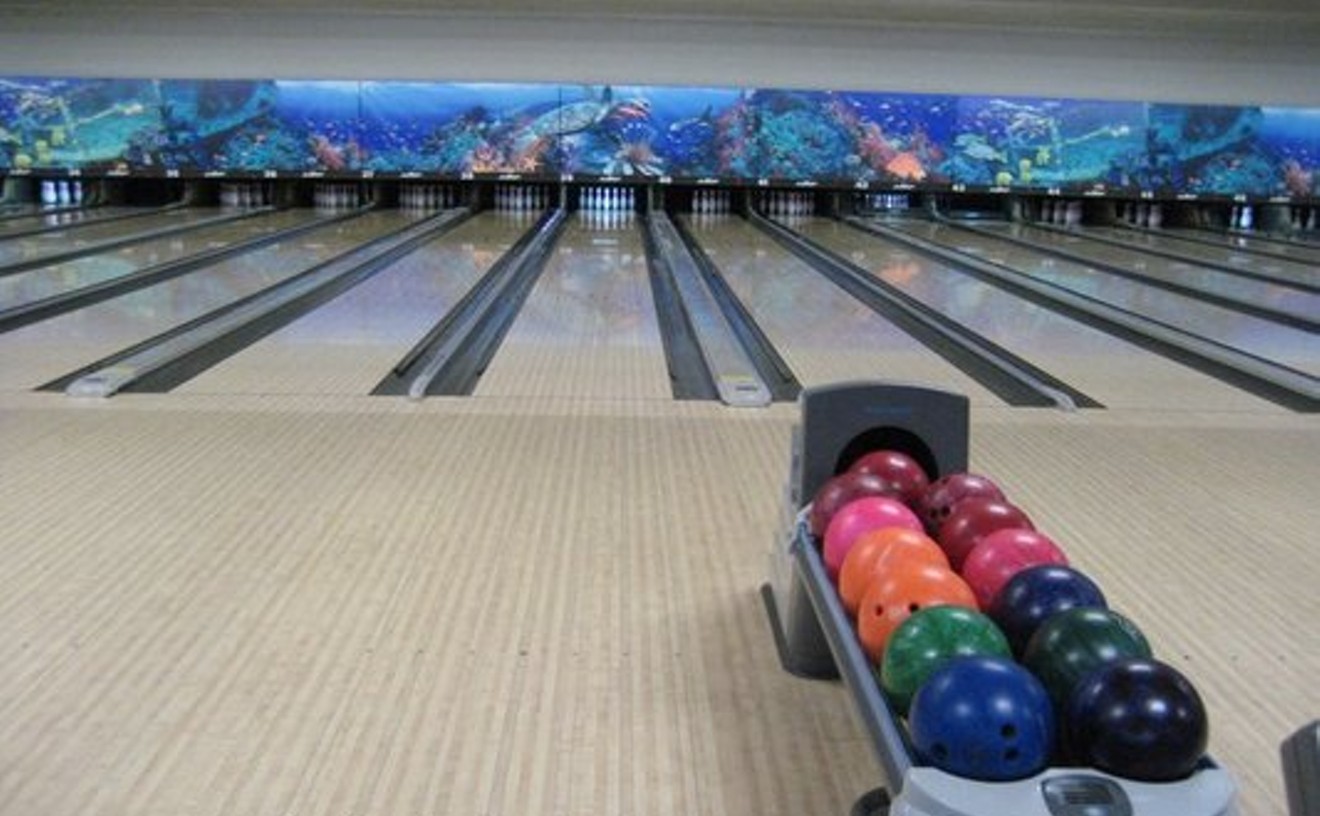 Have you ever had an old boyfriend for whom you always had a soft spot, despite the fact that he was, well, a little lacking in certain important places? Then a few years later, you run into him randomly, hit the sack for nostalgia's sake, and it's like, "Whoa! Where did that elephant's tail come from?" And it turns out he was the product of a top-secret government experiment to create a centaur, but only one out of three legs responded to the treatment, and the only cogent response you can come up with is, "Will you marry me?"

Well, that's kind of what it's like going back to Bird Bowl since the owners recovered all 16 of their billiard tables with fresh new felt. The place has always been pure Miami — way out on Bird Road, wedged into a shopping center that reeks of failure, with a gigantic red sign that no small business these days would dare invest in — but they've committed themselves the past few years to updating things. Besides the all-important felt, in the past two years alone, they've expanded the game room, made over the restaurant, jazzed up the screens for bowlers, and added wireless Internet access, all while retaining that hollow plasticity that makes bowling alleys so acutely nostalgic.

The billiards room is comfortably sectioned off, with its own bar and a lighting scheme that makes the tables seem to glow. The sticks are in good shape too, and the $9.99 price per hour isn't too bad. (FYI: That goes up to $14.99 on weekends.)

The exterior is in a state of partial demolition, which, honestly, they should just leave half-completed and flawed, disguising the monstrous, throbbing wad of entertainment indoors.

Bird Bowl, will you marry me?

Bingo Night at the Standard 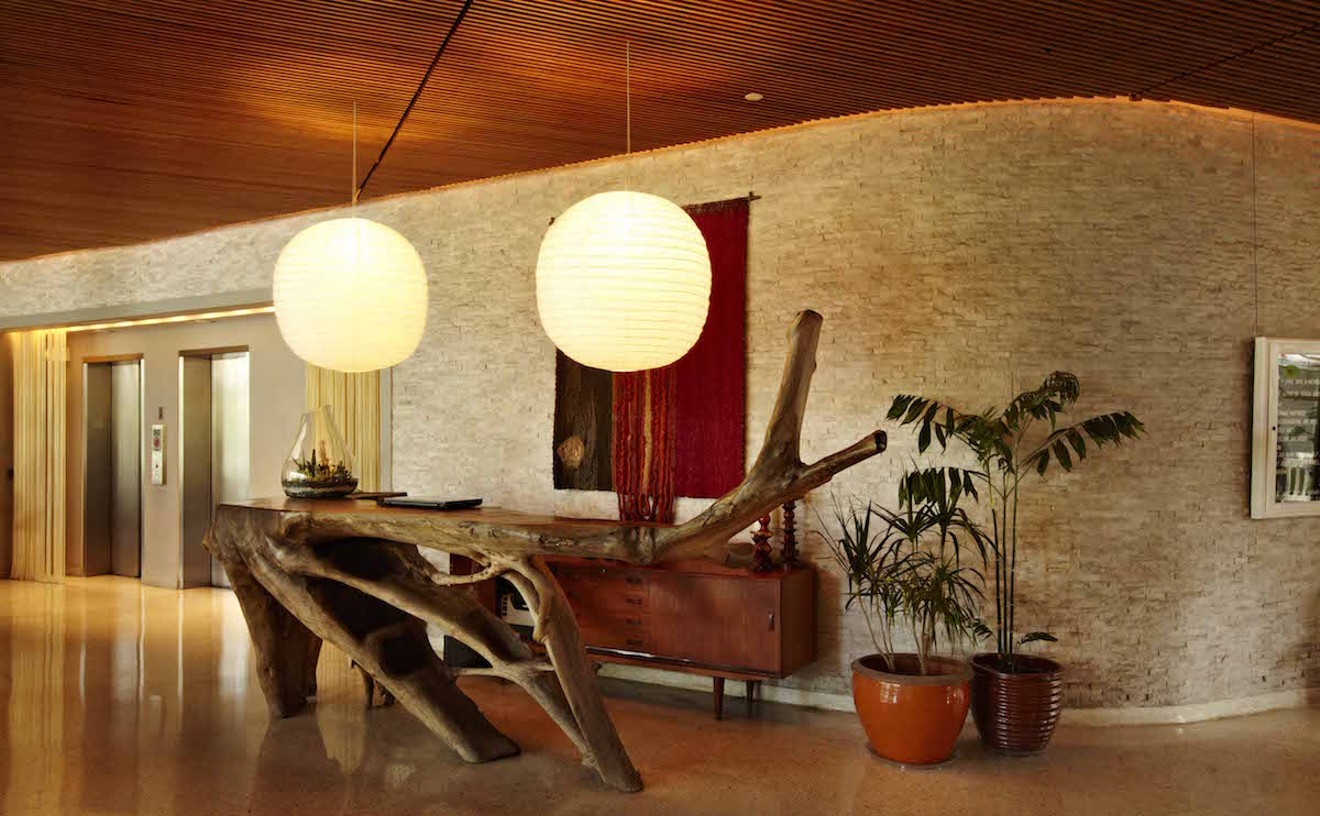 This ain't your great-aunt's bingo night. Every Sunday, a mostly 20- to 30-something group of hipsters and other drunks packs into the comfortable Art Deco lobby of the Standard Hotel to dab with giant markers at paper game cards. The atmosphere gets a bit raucous, nudged on by the hilarious (and hot) female MC, who specializes in campy innuendo: combination B-10 becomes "beaten off," and I-16 is announced as simply "statutory." "What does it take to date Michael Jackson?" she implores time and again, until it gets old and then somehow becomes funny again: You must B-14, naturally. The bingo is free because the stiff drinks are expensive, but there's at least a chance of going home with a real haul: Prizes include bottles of champagne, passes to the Standard's amazing spa, or one-night stays at the hotel. 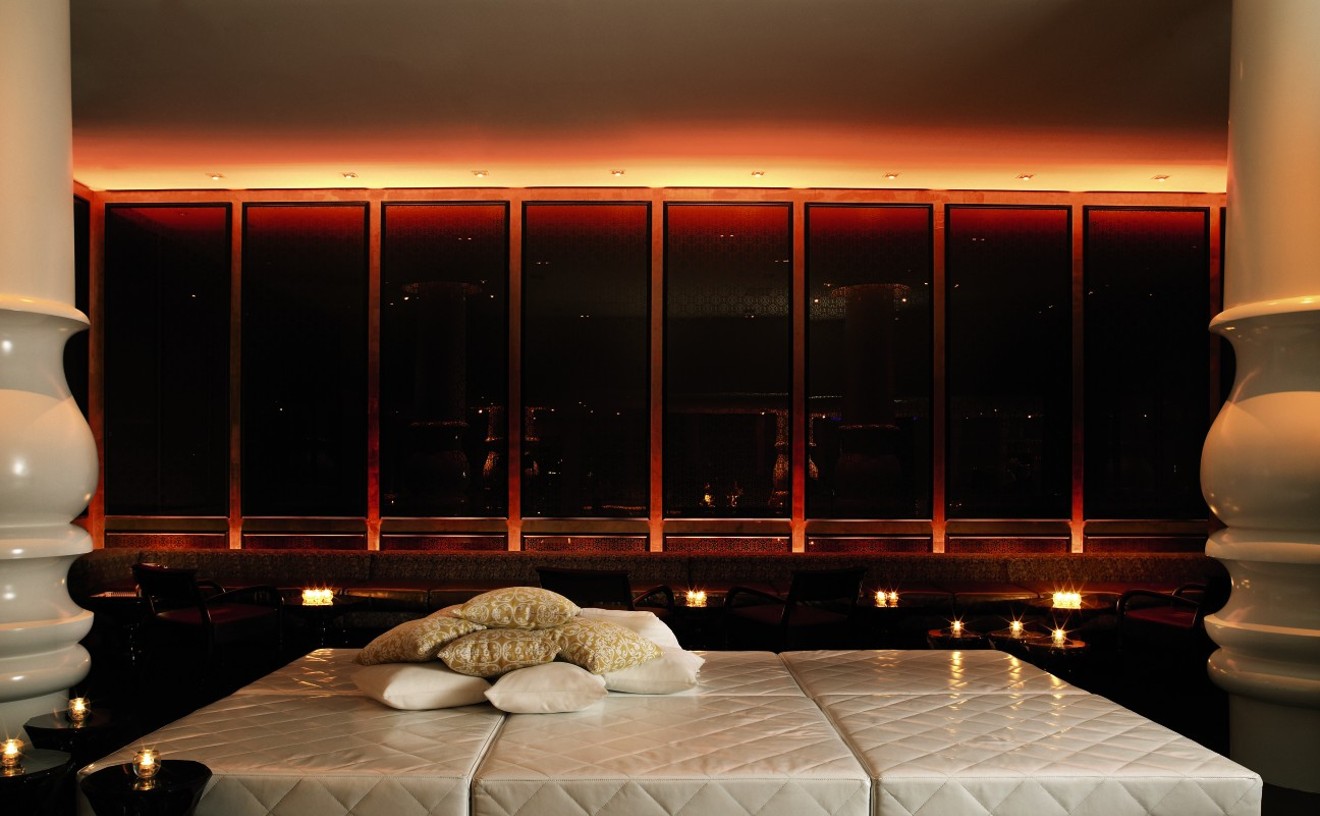 One of the perks of living in Miami is the opportunity to sip a cold, refreshing beverage while basking in the sun and enjoying spectacular water views. Luckily, the outdoor Sunset Lounge at hipster hotel the Mondrian makes good use of its waterfront locale to offer sweeping vistas of Biscayne Bay amid a daydreamy landscape outfitted by Dutch designer Marcel Wanders. It includes oversize hedges, red-and-white paisley couches, and an adult sandbox. With more than 50 Brazilian cachaças on hand, the bar is constantly churning out something fruity, tangy, and strong like the litchi and elderflower caipirinha ($16), made from crushed litchis, limes, and elderflower liqueur. 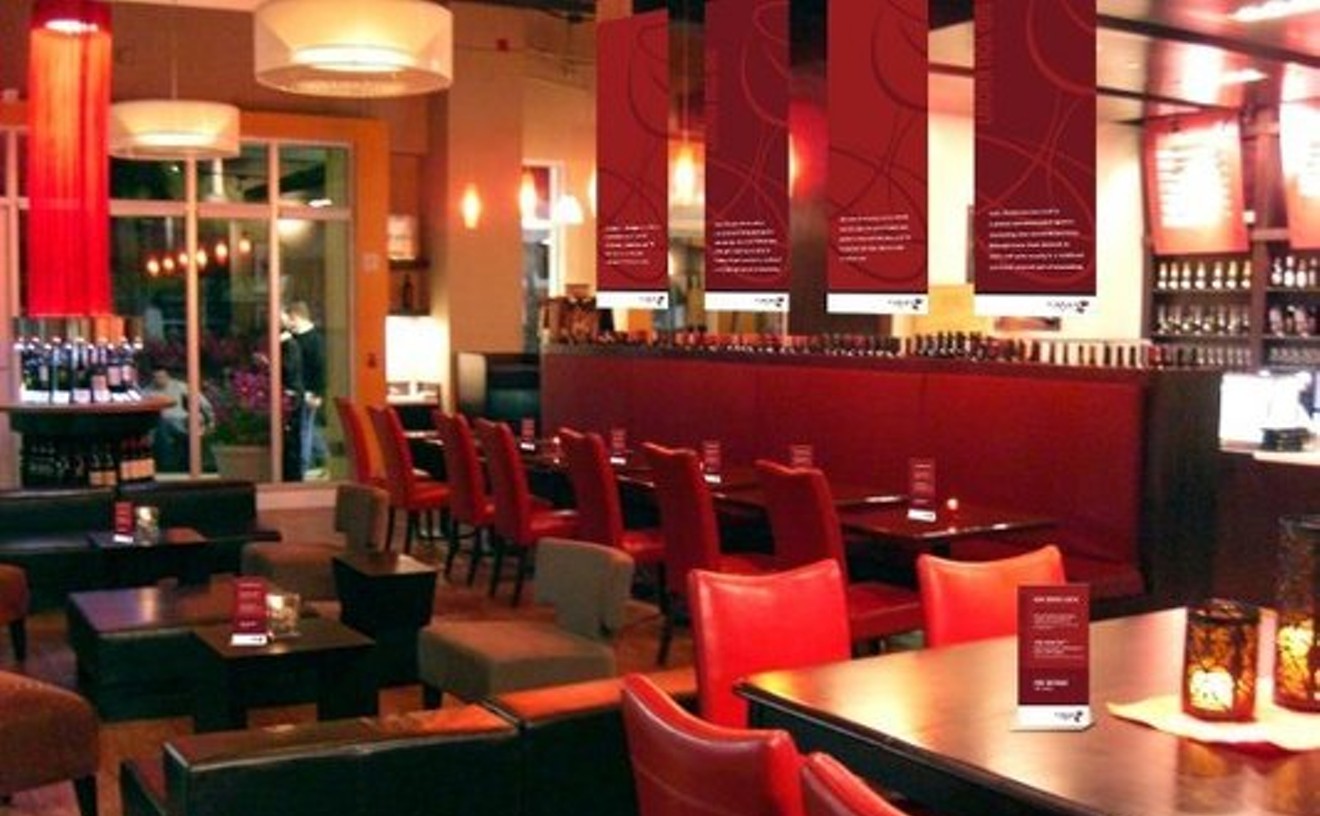 Like a well-aged Brunello, Cavas Wine Tasting Room hits the (visual) palate with a complex burst of impressions. The décor lands first. Casual leather sofas rest near floor-to-ceiling windows looking out on the masses wandering happily along Española Way. Chic, tall black tables with tiny candles fill the floor, and hundreds of wine bottles, attractively lit with soft bulbs, line the walls. But just when you think you've wandered into another casual wine bar, your eyes catch... the machines. Along each wall, 70 or 80 uncorked bottles of wine nestle inside the stainless-steel contraptions with glowing red LED lights and thin spouts, like espresso makers. Not only is the ambiance lovely, but also the devices are key to Cavas's take on the winetasting experience. Here's how it works: You buy a plastic card, loaded with however much you'd like to spend, from the front desk. You swipe the card in the machines, which can dispense one-ounce samples, half-glasses, or full glasses of any bottle on display. Before you know it, you're wandering around like a kid with a charge card at the video arcade, trying one-dollar sips of cool, cheap Australian Chardonnay; nine-dollar ounces of oaky aged French Merlots; and eight-dollar half glasses of crisp Malbec. It's winetasting from the future, homes. And it goes down smooth. 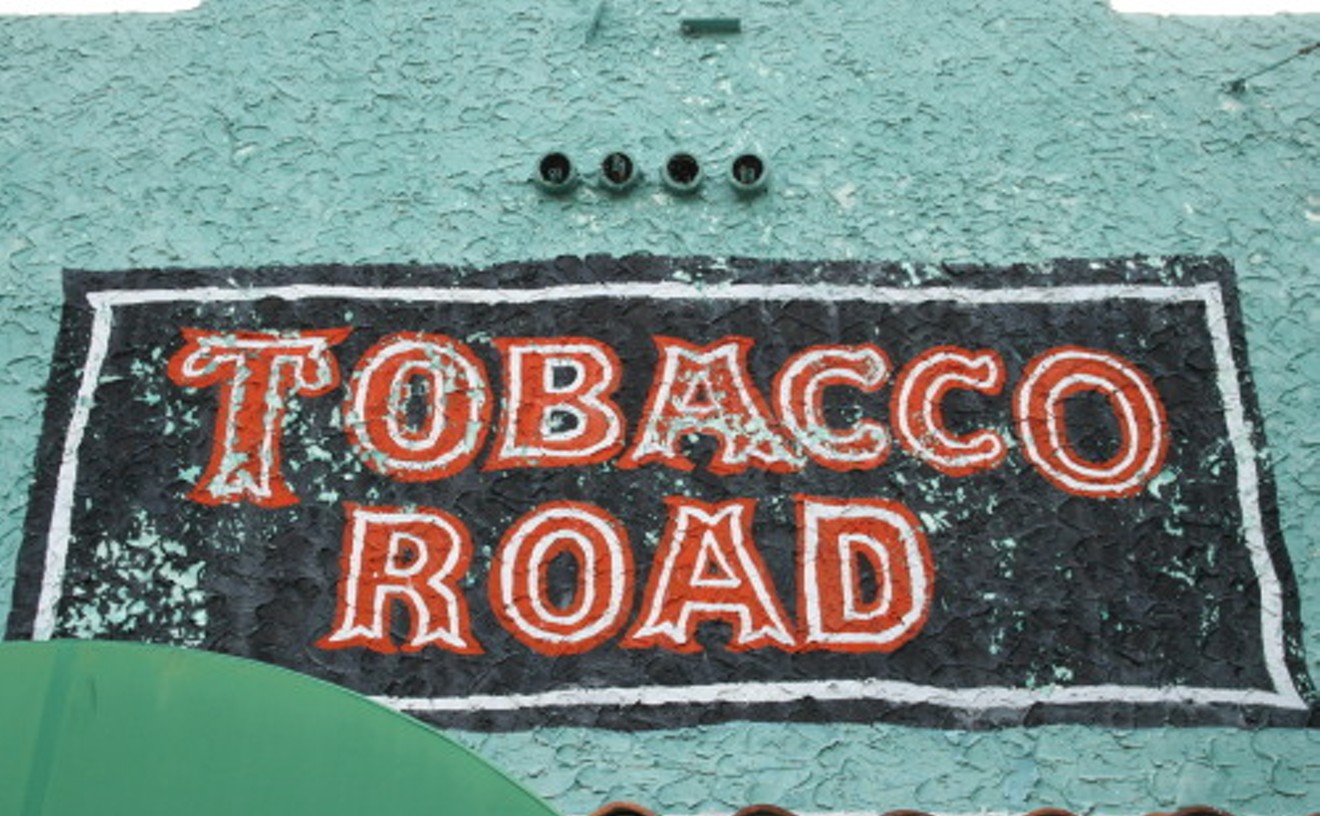 Ninety-six isn't necessarily a cool age. Your diaper has to be changed every few hours, walks through the mall are as tiring as watching young whippersnappers such as that bow-tied punk Larry King yammer on your talking picture box, and Metamucil comes in only so many flavors. But if you're a 96-year-old rock club that snagged the first liquor license in all of Miami-Dade after being frequented by Al Capone, you're pretty kick-ass. Slap on a 96-minute (6 to 7:36 p.m.) Friday happy hour that commemorates your golden-oldie age by offering 96-cent well cocktails ($1.96 for premium booze) with a free appetizer, and you've just upped your status to supremely awesome. Whatever your age, there's reason enough to celebrate with a Pink Lady or a Red Headed Slut. 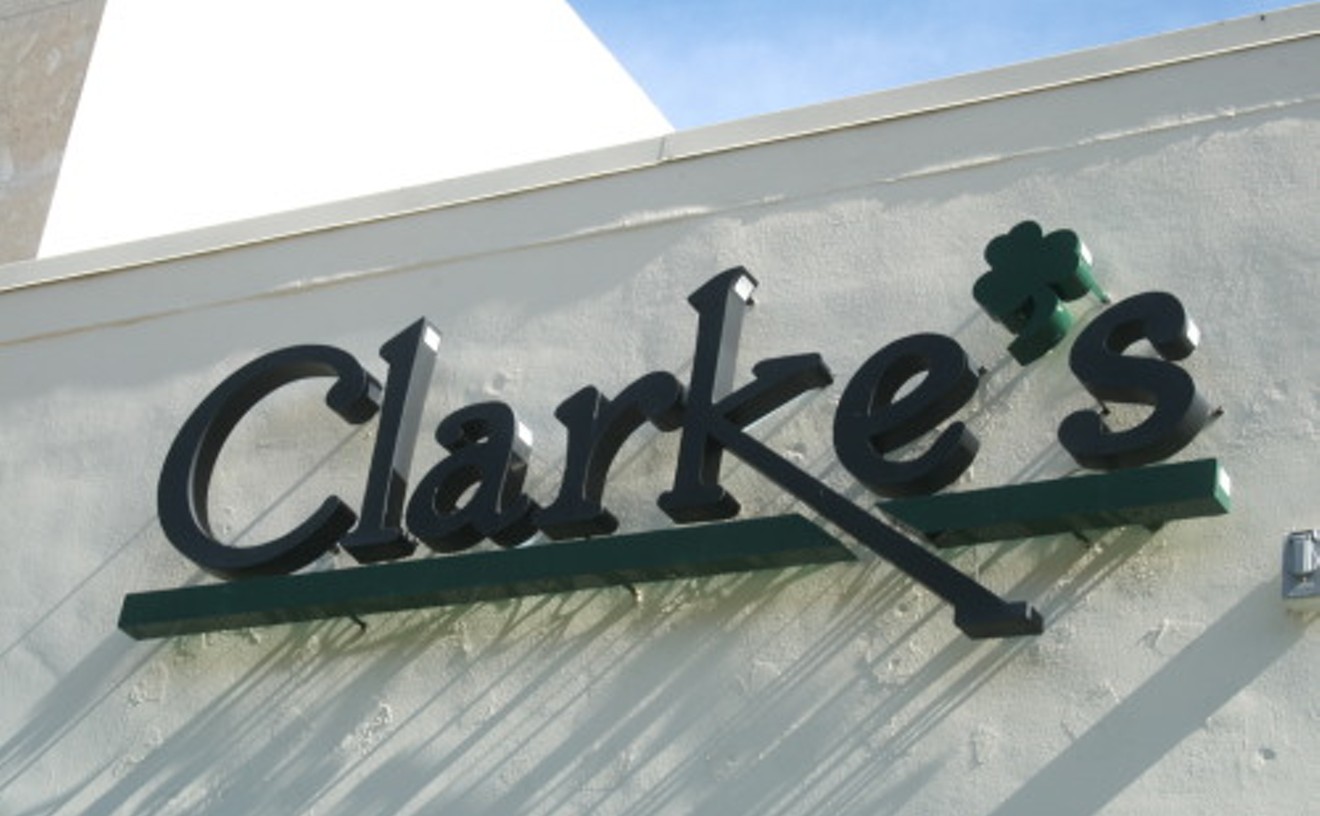 With truly serious cases of Sunday sickness, there's absolutely no time for an experimental hangover cure. In these situations, the only acceptable remedy is a proven one: the ever-reliable bloody mary. And Clarke's serves the staple right. Their version includes pulpy tomato juice spiked with vodka and seasoned with celery salt, pepper, and fresh horseradish. It's all poured into a tall water glass over a fistful of ice cubes. There's no unnecessary flair or surprise twists or dreaded factory-made mixes. It has just enough bite to blast the sinuses clear and enough body to settle an uneasy stomach. Like Clarke's itself, the drink is a classic idea refined to the essentials. So order another or two more — it's feasible at five bucks to nibble around the huge pimento olive garnish and prep for an Irish-style midday meal. The bloody mary and brunch — Sundays 11 a.m. to 4 p.m. — are a hug for your ailing gut.

Perhaps you've noticed longer lines to the bathroom at your favorite bar. Or you've seen revelers sneakily turning their bodies into nightclub corners to hide some illicit activity. It's not Miami's newest white-powder renaissance (that we know of). In today's economy, it's hard out here for a pimp — or a ho or a bus driver or a laid-off journalist or just about anybody else who wants to drink the night away but doesn't have $12 for each gin-and-tonic. Eight dollars, which is what a flask full of reasonably good vodka or whiskey should cost you at a liquor store, sounds a hell of a lot more attractive. We're not saying to slip Grandpa's metal Thermos into the pocket of some loose-fitting clothing before going clubbing is the moral thing to do — somebody has to pay those bouncers, after all — but neither is you being asked to fork over an hour's worth of pay for one beverage. At least that's how we justify it to ourselves. If a bouncer catches you making the liquor-into-soda transfer, we never met. And even if all you get is a Sprite, please tip your bartender a buck.