How do you translate "This coffee is far better than any rocket fuel NASA ever invented" to español? Betcha one of the friendly female baristas at La Nueva Alameda Cafeteria could teach you. For less than a franchise drip coffee — only $1 — she'll customize a not-too-frothy, just-sweet-enough eight-ounce café con leche with your personal sugar-espresso-milk ratio preference. Watch her pour it: The crema is honey-colored and the milk is steamed slower than grandma's hot chocolate. At this Allapattah joint, you won't hear a single sentence in English — especially not over the Latin dance music booming on the jukebox. Old guys with rough hands flirt with young Latina waitresses. Regulars greet each other with cheek kisses at the to-go window. And nobody wears those awful green aprons. Open 6 a.m. to 10 p.m. seven days a week . 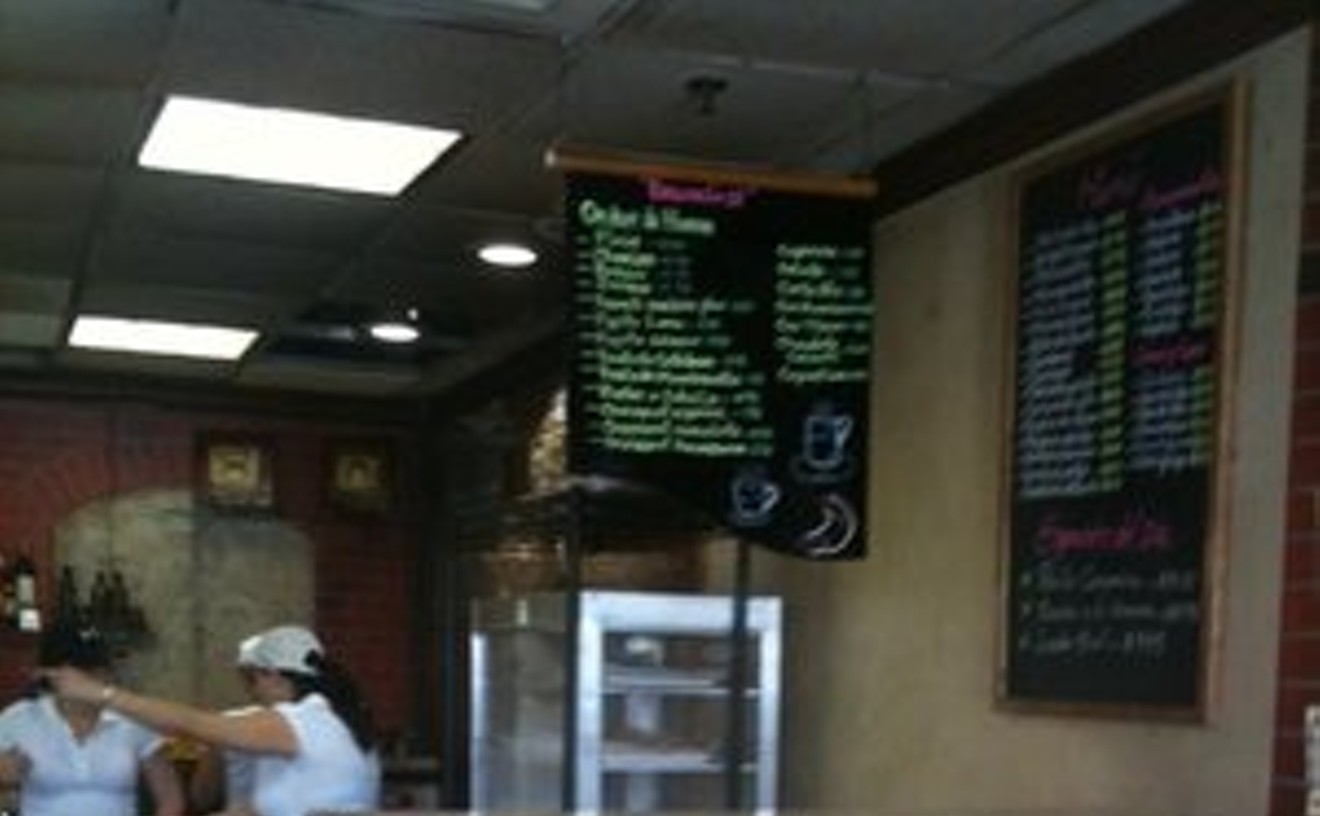 In a city swamped with antiseptically lit cafeterias and overcrowded cafecito counters, it's a luxury to find both the ambiance and space where you can lounge comfortably while feeding your caffeine habit. For that reason, the discovery of a quaint European-style café such as Ankarr should be considered nothing less than a major coup for the serious java drinker. With its cream-tiled Italian villa interior and trompe l'oeil scenic wall paintings, this rustic coffeehouse is the perfect place to restart your energy-sapped derriere. Just take a seat — inside or out — and start with the following five-dollar combo: one square of homemade tiramisu and a double shot of rich, revivifying espresso. Or if you prefer the milky stuff, go for a tall mug of smooth cappuccino that's topped with a mound of nutmeg-dusted whipped cream. There's even wine and a selection of signature sandwiches — chicken, prosciutto, and Spanish sausage — for those times when the need for something savory takes over. But whatever your choice, be sure to visit early. Ankarr caters mostly to retirees and daytime workers, closing no later than 7 p.m. during the week.

Best Restaurants to Bite the Dust

More than two dozen local restaurants didn't live to see 2009 — a high body count, for sure. Two of the losses that sting most are those of Mark's South Beach and Sheba Ethiopian. Larry LaValley was a longtime executive chef at the former, but it was the brilliant culinary combinations of namesake chef Mark Militello that garnered the acclaim (to wit: pan-seared arctic char over English pea with farro risotto and beurre rouge). Militello, after all, is a James Beard Award winner and earned a place on the top tier of South Florida chefs via his celebrated Las Olas, Mizner Park, City Place, and South Beach properties — all of which bit the dust during the past 12 months. We will miss Sheba too — it was one of very few Ethiopian restaurants, perhaps the sole outlet for doro wat (chicken legs and thighs in berbere sauce), kifto (spicy tenderloin tartar), and kik alicha (yellow split peas with green peppers and herbs). Plus it was cool to scoop up the food with that sour, spongy injera bread. Now the good news: Nearby Kafa Café filled the void and is serving Ethiopian fare. Sheba will soon rise from the ashes and debut up in Hollywood. And chef Militello is helming 1 Bleu Restaurant in the Regent Bal Harbour.