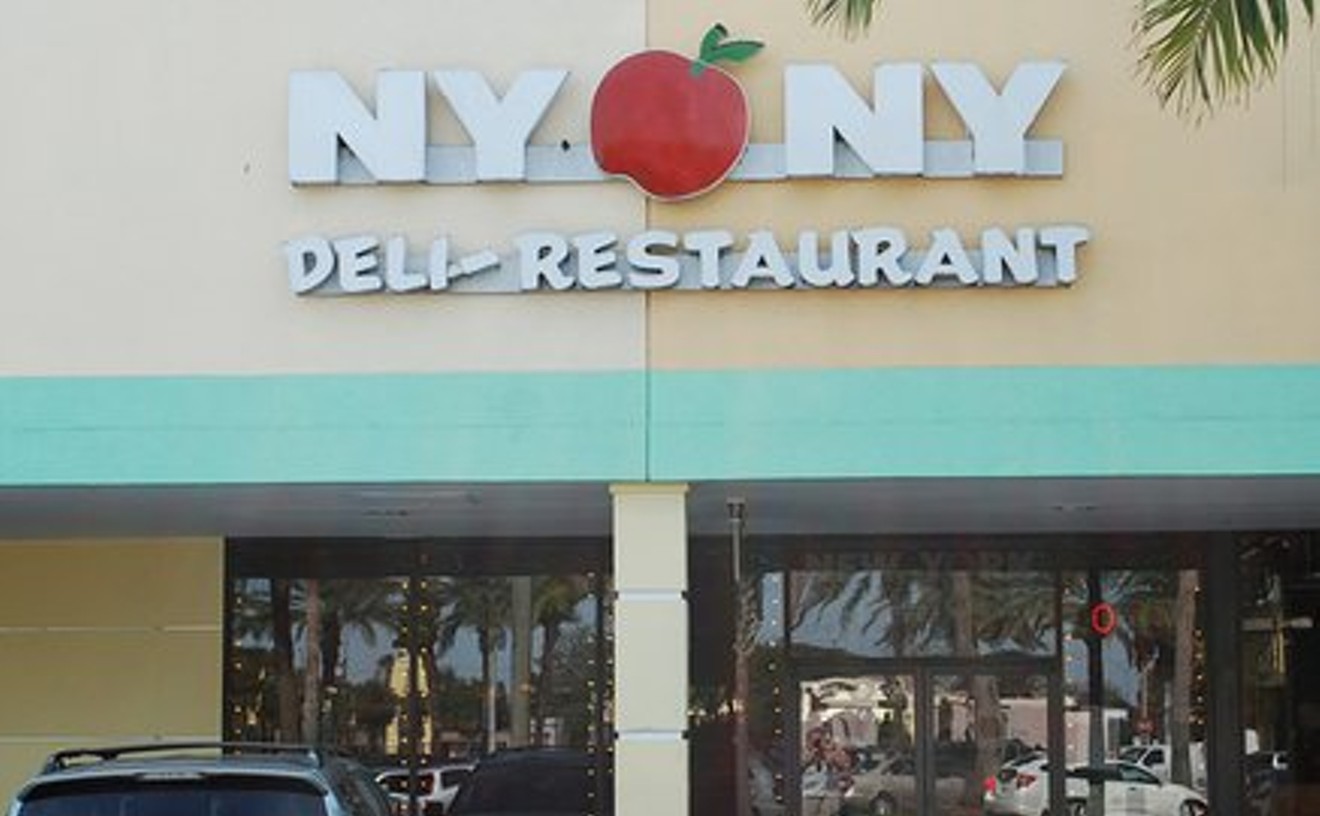 It takes some searching to locate New York New York. It's not nearly as obvious as the Big Apple itself. But once found, this delicatessen hides nothing. From the massive mural of a pre-9/11 NYC skyline to the Statue of Liberty mini-replica standing guard over the salad bar, the whole setup pays homage to classic Manhattan. It's open seven days a week from sunrise to 11 p.m., and there are no bad menu choices. Start with the all-day breakfast staples. There's a straightforward two-egg platter or maybe cream cheese and lox on a warm bagel. Check out the mashed potato omelet. Then come back for lunch and suck down a $5.95 bowl of matzo ball soup before tackling a fist-thick sandwich of fatty brisket, pastrami, or corned beef slammed between two slices of grilled rye. Finally, at dinnertime, go with the kosher franks on a bed of beans. And dessert should be nothing but a big wedge of cherry cheesecake. It's all here, including $1.65 unlimited coffee to keep you awake while catching up on the day's Times and joking loudly with friends until closing.

Pita Plus of Aventura

Pita Plus is not a hut or concession stand or shoebox-size take-out joint. With its spacious quarters and 60 seats, it is more like a falafel arena. It needs to be this large because so many folks flock here for the signature Middle Eastern sandwich. Four cleanly fried falafel bombs go poof into the warmed pita pocket, followed rapid-fire by fire-red tomatoes, cucumbers, shrapnel-like scraps of cabbage, eggplant, pickles — anything you want from the counterperson's arsenal of salads — along with hummus, tahini, and a flash of hot sauce if desired. It all adds up to a disproportionate amount of flavor for the dollar: $6.40, tax included.

Like the Constitution, the Incredible Hulk, and a baseball pitcher working a no-hitter, there are some things in this world that you just shouldn't mess around with. Old-school bagel making obviously should have a place on that list, yet the world is bafflingly full of frozen, bagged, pre-made holes of dough stomping all over the good name of this traditional Jewish delicacy. Fortunately for us, Miami has Bagels and Co., the best little deli on Biscayne Boulevard and a safe haven for the way bagels should be made: hand-rolled, boiled, and then baked to a golden finish. They aren't cheap — $9.75 — and they come in all the traditional flavors: poppy, sesame, raisin, garlic, etc. The payoff from this old-fashioned methodology is obvious and delicious: bagels as fat and plump as a grapefruit, the skin crisp, and the innards soft and chewy. So don't mess with bagels from anywhere else or we'll go all Bruce Banner on your ass. Keep it old-school at Bagels and Co.

The Spanish cuisine that chef Marc Vidal plates at Por Fin is so attention-grabbing one can be forgiven for not properly appreciating the dark woods, framed mirrors, arched windows, and wrought-iron accents that conjure the coziness of a comely Catalonian country inn. The firm grains of Calasparra rice that buttress clams, mussels, calamari, and shrimp can make anyone forget having passed a glistening open kitchen upon entering the restaurant. And there is no stopping pear-plumped pasta purses pooled in Cabrales sauce with honey, truffle, and cream from dominating post-dinner chatter. Diners may choose a table upstairs, where a U-shaped bar and couch-appointed lounge lend the ambiance a certain liveliness; downstairs in the more subdued dining room; or outdoors on either level, the verandah above being the more romantic choice. Regardless of where you sit, the décor will play its quiet part in what is a seamless dining experience of fine food, wine, service, prices (half-portions make Por Fin extremely affordable), and unbeatable ambiance for lunch or dinner (open until midnight on weekends). 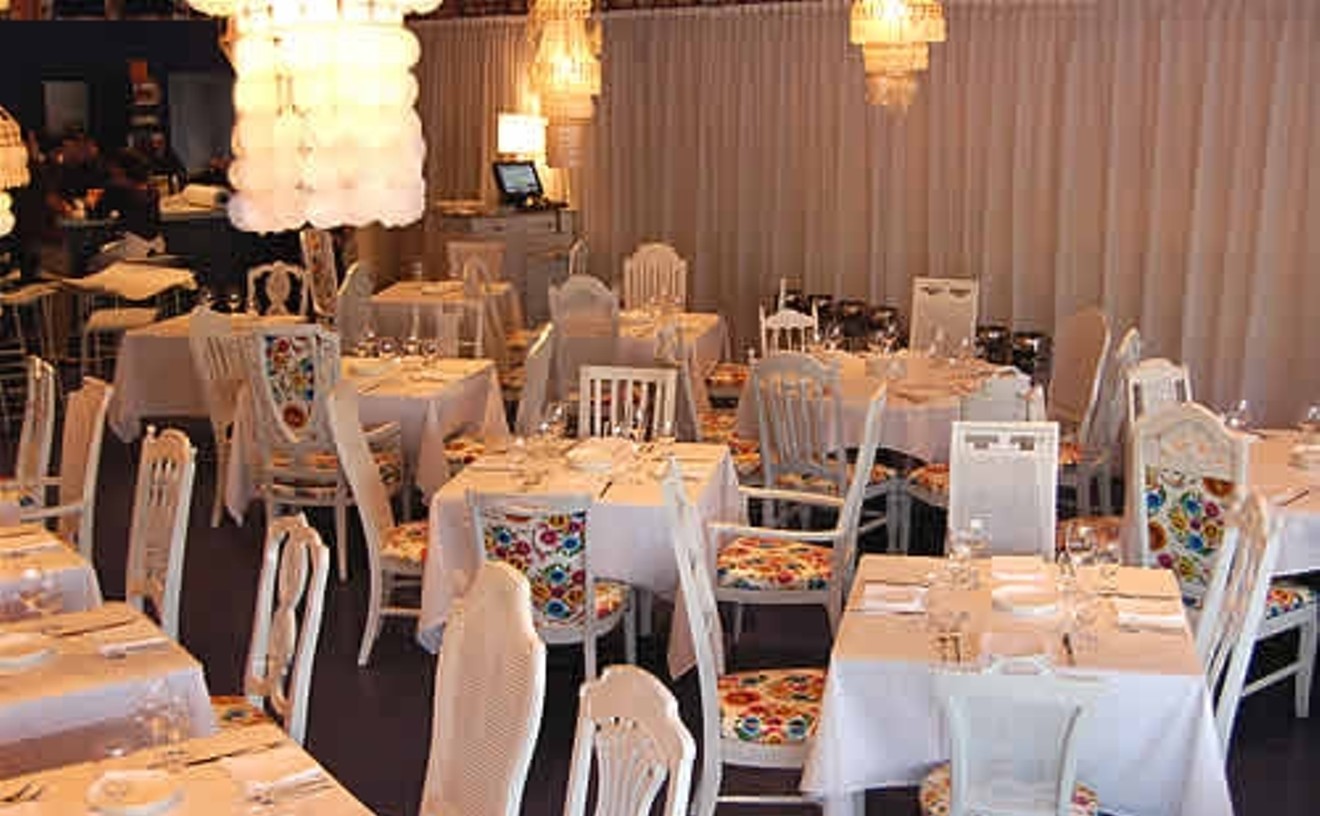 Each year, upon publication of this issue, we hear from readers who want to know how we could have recognized so many restaurants yet neglected to honor such-and-such well-regarded establishment. Usually it comes down to a matter of a certain eatery, even if one of the best, simply not fitting squarely into any specific category — or else, over time, having fit into that category once too often. This year, we asked ourselves: How can we possibly leave out Michy's and OLA? Doug Rodriguez of the latter was among the first to create Nuevo Latino cuisine and put it in a South Florida context, and he still does so better than anyone else. Michelle Bernstein helped locally pioneer the idea of a big-name chef offering high-quality fare in an unpretentious neighborhood restaurant setting — the gastronomic equivalent of a rock star going from arena shows to small venues. The cuisine at both establishments pulsates with vibrant, often surprising flavors and a creativity born of culinary genius. Let's just call OLA and Michy's two of our best. Period. 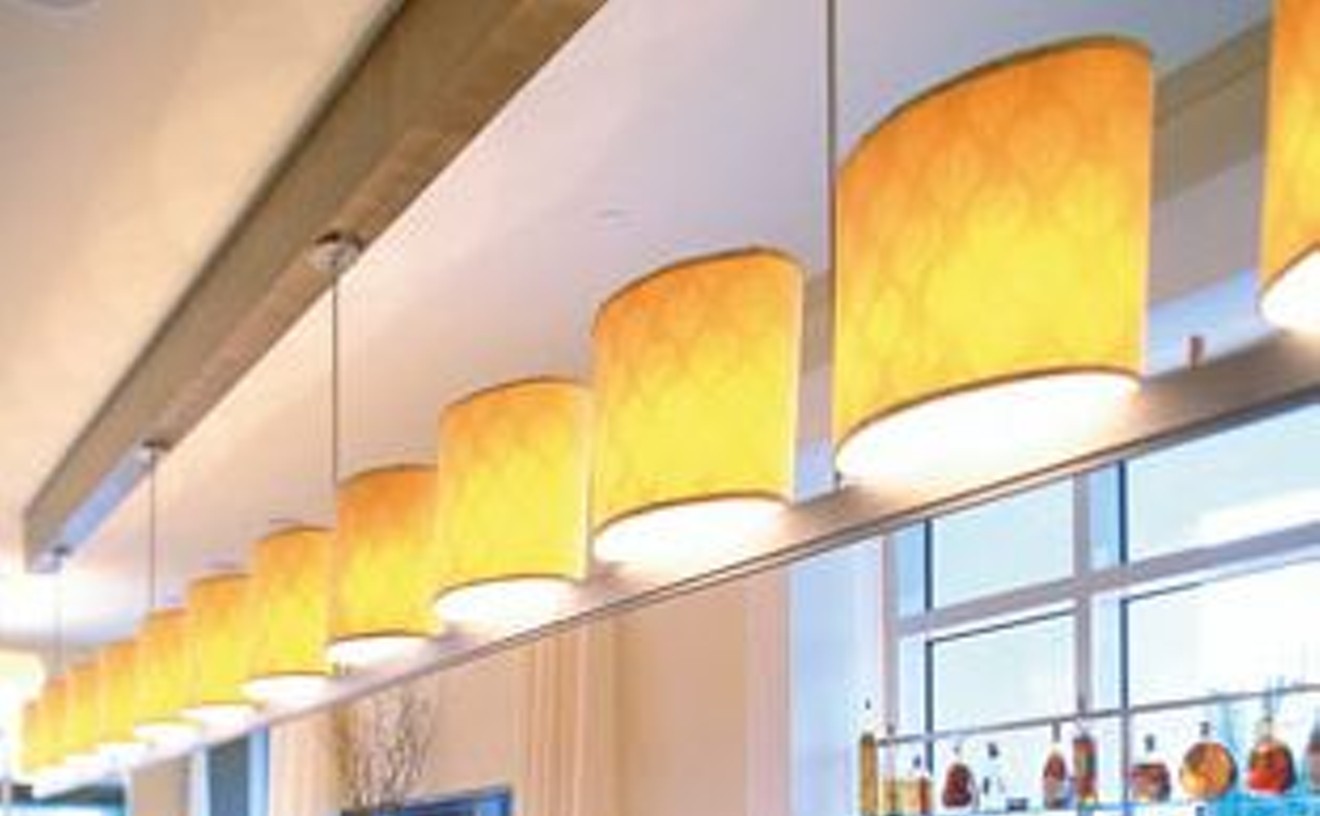 Clay Conley took over as top toque at Azul in 2005. The prior chef, Michelle Bernstein, had propelled the property to the top of the hotel restaurant heap; Conley, a protégé of Boston celebrity chef Todd English, has kept it there. His clean, precise preparations of Mediterranean cuisine (along with some American and Asian touches) boast multiple flavors and often involve various takes of one main ingredient on the plate. To wit: a duet of Sonoma rabbit — the loin wrapped in bacon, the leg braised, and the whole served with mustard cream, herbed spaetzle, and pickled cipollini onions ($38); or Moroccan-inspired lamb harissa, featuring the loin, shank, and grilled chop with pepper salad and raita ($44). Nobody makes a better clam chowder either; Azul's rendition is chock full of crisp strips of Ipswitch bivalves, pork belly confit, and malt vinegar aioli ($16). The wine program spans 700 global labels, service is stellar, and the dining room — with a white marble exhibition kitchen and floor-to-ceiling views of Biscayne Bay — is among the most beautiful in town. Yes, Azul still represents the summit of hotel dining, but it's not lonely at the top — make sure to reserve for lunch or dinner, because we are not alone in noting Conley's talents.

The strawberry marshmallow tart looks like a ruby-studded hat for a pampered parakeet. The chocolate macaroon could be an ottoman for Trump's pet caterpillar. And the champagne truffles: eyes for an ostentatious snowman. Imagination runs amok when confronted with glistening display cases arrayed with éclairs, meringues, pralines, petits fours, and all sorts of dashing desserts that Willy Wonka woulda made if he were born in France. That's where Solo's award-winning pastry chef (and master chocolatier) Jean-Marie Auboine comes from, and his creations are as stunningly presented and astonishingly luscious as those found in any Parisian patisserie (prices per individual treat range from $2 to $6). This pastry shop/café is found adjacent to the Fontainebleau Hotel's elegant lobby, and as the day progresses (open 6 a.m. to 9 p.m. daily), so does the menu — from an emphasis on espressos and pastries to a more substantial selection of salads and sandwiches. The Fontainebleau's iconic cakes, synonymous with the hotel since 1954, are also available — plus there's a doughnut counter, espresso counter, and so forth. Solo's desserts are the proverbial toy store for those with a sweet tooth. 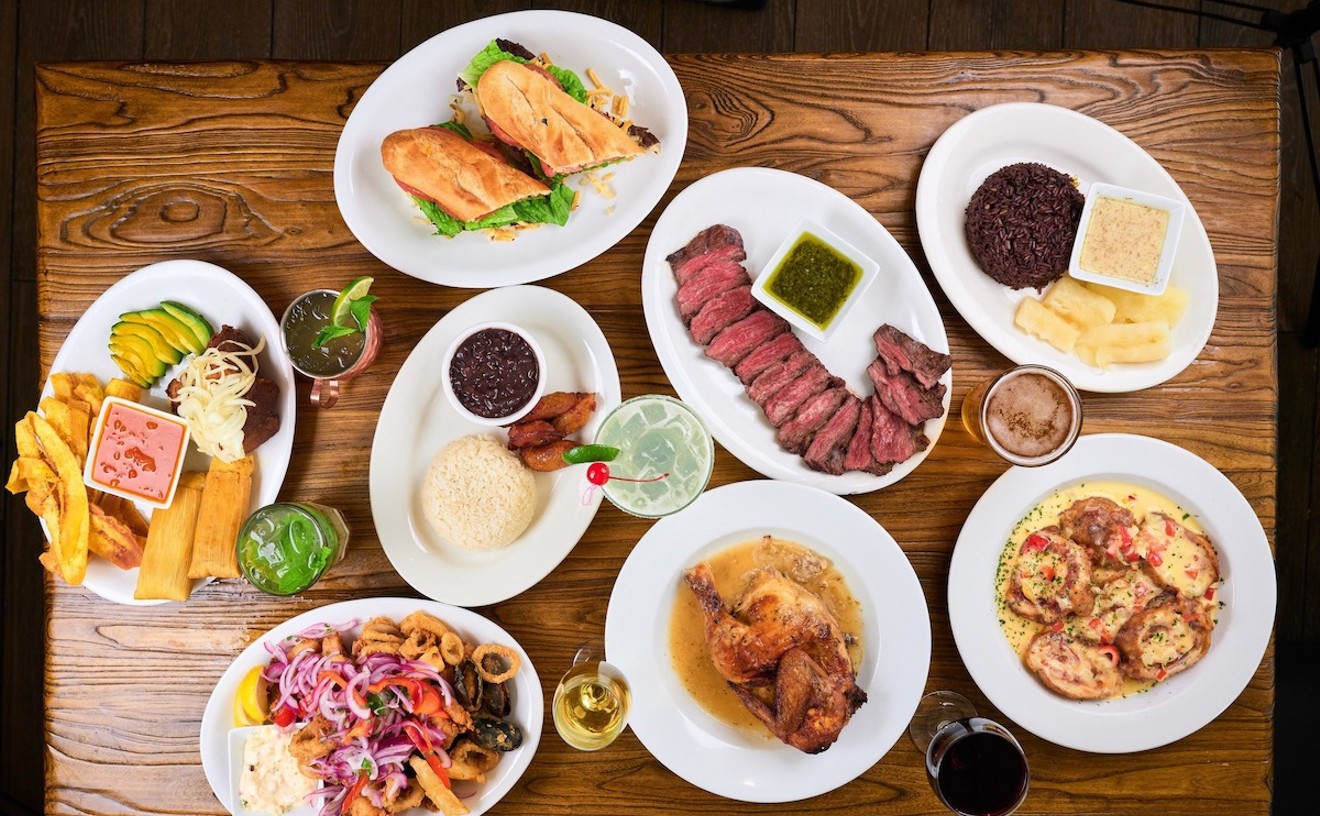 Flan — or "Spanish cheesecake," as you might hear some people call it at cocktail parties — tends to inspire mediocrity in chefs. "Damn it!" we've been known to scream as we're being dragged from local restaurants by police. "We didn't order a wet and tasteless sponge for dessert!" But at Havana Harry's, the Coral Gables Versailles competitor where overwhelmed servers do nightly battle with hordes of diners, the pastry chefs still find time to produce the perfect flan. The custard is creamy, not congealed — just firm enough to keep its shape. And it's topped with vanilla ice cream and a masterful homemade caramel sauce. Harry's is the Tiffany brand of flans, but it doesn't carry a steep price: $4.95. 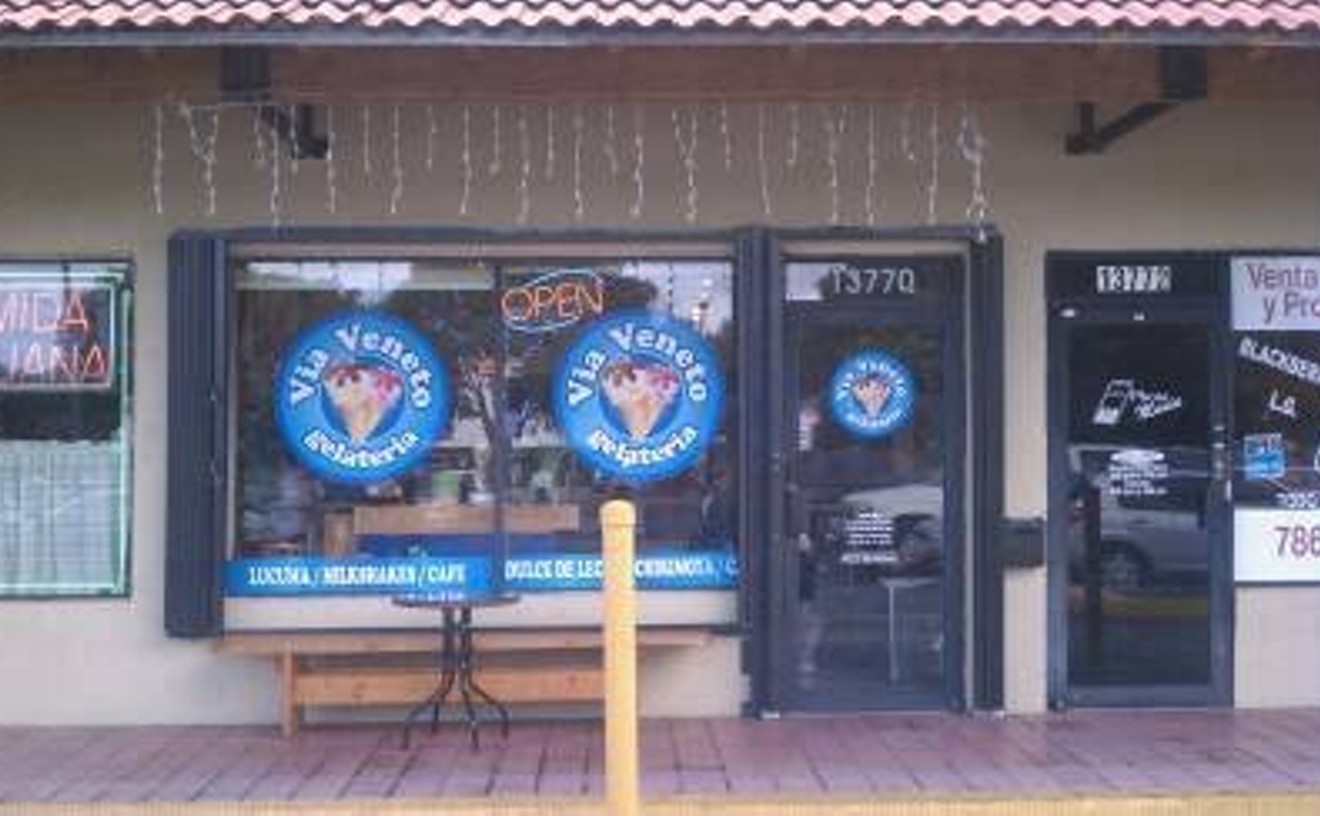 Buried in a tiny strip mall that lies hidden in the shadow of the Kendale Lakes Plaza is a treasure called Via Veneto. You won't find gold or precious stones here, but flavors that once required a trek to the South American hinterlands.

Via Veneto offers traditional Italian flavors of homemade gelato such as vanilla, chocolate, coffee, and stracciatella, but its glory is Latin favorites that are elusive even in Miami. Lucuma gelato seems to be as popular at the shop as it is rare in the States. A fruit native to Peru, lucuma has a rich, maple-syrup sweetness, and desserts made from it have a mellow orange hue. The shop also offers a sorbet made from Peruvian staple chicha morada, as well as the Argentine bariloche, which has a chocolate base.

Via Veneto serves several exotic fruit sorbets — including chirimoya, tamarind, and maracuya — plus Miami jewels mamey and guanabana. You can grab a sugar cone for $4 or choose from a variety of sizes to take home. A container that holds almost two cups costs $8, and the largest, which holds about two pounds, can cost up to $60, depending on the flavor. The shop is open from 1 to 10:30 p.m. Sunday through Thursday and from 1 to 11:30 p.m. Friday and Saturday. 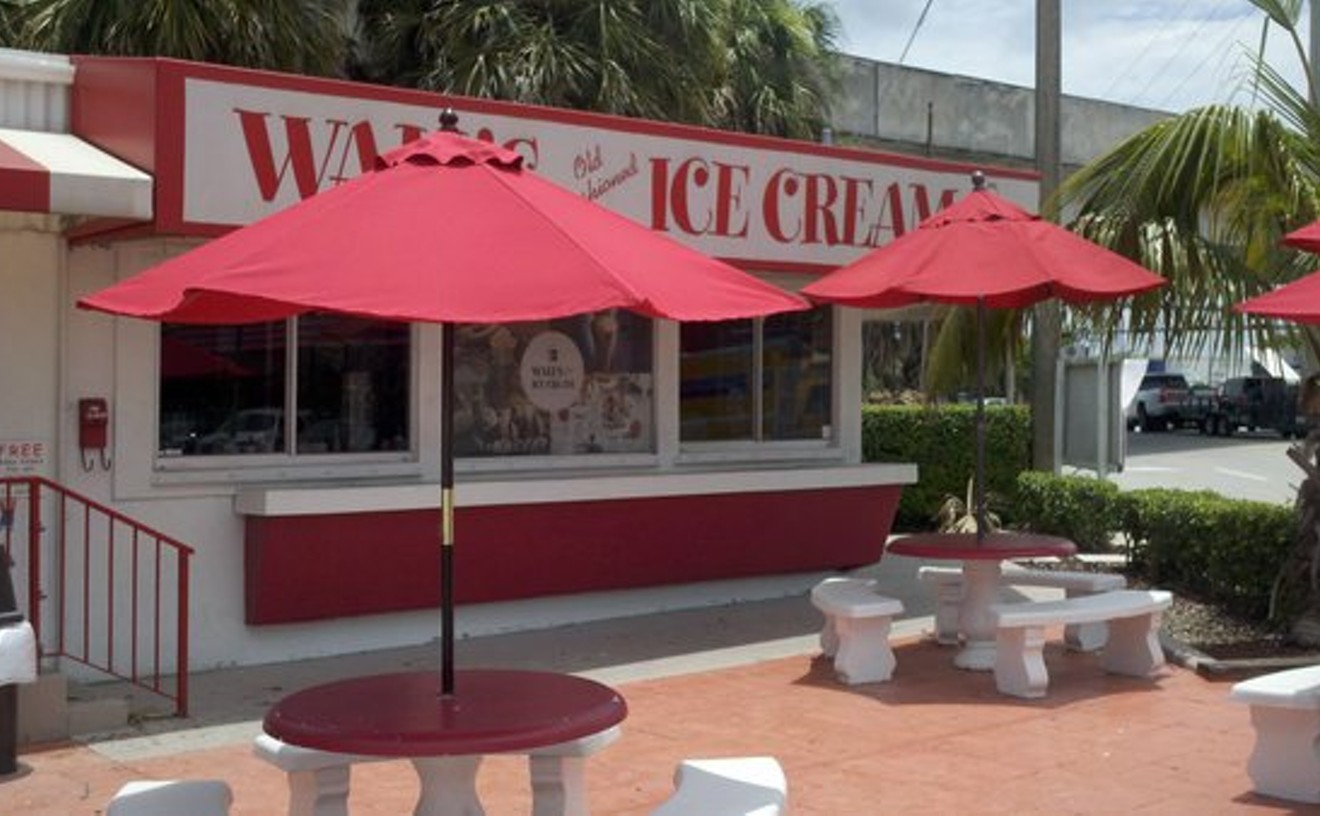 I scream! You scream? Ice cream has gone through quite a bit over the years. It's been freeze-dried for astronauts into tiny icy dots that stick to your tongue. And it's been muddled with cumbersome toppings while being reduced to mush on a chilly mass-produced stone. Here at New Times, we say nay to dessert torture and yea to Wall's Old Fashioned Ice Cream, where traditional flavors such as cookies 'n' cream and bright green and nutty pistachio are all churned to tantalizing perfection. And speaking of enticing: Their mamey flavor has been known to taste a little like sushi, and one spoonful of cinnamon ice cream feels like you're shoveling an entire box of Cinnamon Toast Crunch into your mouth. Get a scoop (a small costs $2.99) or two in one of their waffle cones — preferably the one dipped in chocolate and sprinkled with Nerds candy — and take a seat at one of the red umbrella-adorned outdoor tables. There you can watch an episode of I Love Lucy on the boob tube, mounted into the exterior wall of the shop and surrounded by painted muscle cars to give the illusion of a tiny drive-in movie screen. Or if you arrive on a Saturday night, enjoy a DJ styling oldies in the gravel parking lot. And we promise there won't be any acoustic covers of "Happy Birthday," "Rock-a-Bye Baby," or any other obnoxious ice-cream truck jingles.