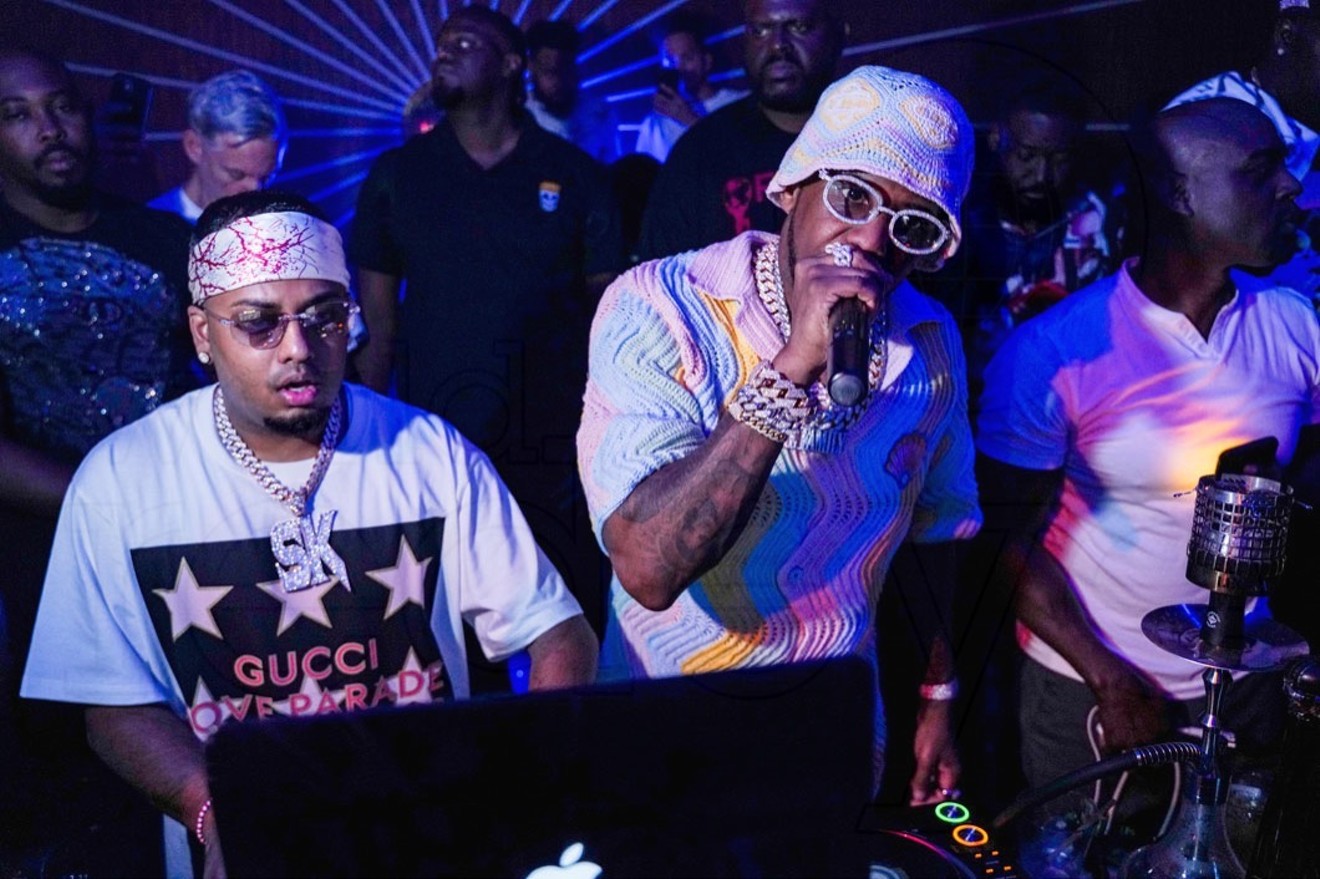 DJ Spin King and Fabolous World Red Eye
It's not easy having eyes all over the scene, being around to take in all the wild visuals at all the worthwhile places in the city. There are, however, those parties and gallery openings where a fortunate photographer can point and shoot. Every week, in collaboration with World Red Eye, New Times brings you a solid recap of all the recent experiences you might've missed around Miami. It's impossible to be everywhere, but, hey, we can try to keep our Eyes on Miami.

Easter Sunday on the Bay at Baia Beach Club Miami

Over 300 Big Brothers Big Sisters of Miami supporters came out in style for the Art of the Match gala presented by Wynwood Walls Foundation.

Manchester United brought the hugely popular fan event #ILOVEUNITED back to the U.S., touching down in Miami on Saturday, April 16. #ILOVEUNITED offered fans the chance to connect with the club they love and experience a United matchday like never before, with a live screening of the Premier League match against Norwich City.

It was a night of groove and good vibes at Mezcalista at Moxy South Beach. Los de la Vega and Georgia Mafia brought the solid house tunes all night long.

An engaging conversation about design in the 4141 Building in the Miami Design District with Athena Calderone, founder of @eyeswoon, interior designer and bestselling author, and Anastasia Koutsioukis, creative director, restauranteur, retailer, and founder of Mandolin and Mrs. Mandolin.

On Thursday, April 14, Johnathan Schultz’s celebrated the opening of his Miami gallery, his first permanent curated space in the U.S., at a star-studded VIP launch party.

Kiki on the River was in full blast as guests enjoyed a delicious refined Greek dinner, followed by a night full of endless bottle parades and dancing, like the weekend never had to end.

Partygoers headed to Strawberry Moon on Saturday for a sunshine-filled day, where they hung out and danced by the pool until the late afternoon.

Partygoers headed to Miami Beach’s best Latin nightclub, Eme, for a fiery night on Saturday. Bottles were poppin’, and guests danced to their favorite tunes all evening long.

Fabolous took over XXIII Club on Sunday, where he closed out the weekend with a bang! Jim Jones was seen hanging in VIP as partygoers ordered endless bottle parades and danced under the neon lights like the night never had to end.

Ja Rule took over the stage at E11even on Friday, where he gave an epic performance and had the entire club hyped. Bottles were popping, and partygoers danced at Miami’s only 24-hour nightclub.

Guests made their way to Mayami, a Tulum-inspired paradise, for a night filled with tequila and great vibes! Bottles were poppin’, and partygoers danced as they celebrated an epic Friday night.

Lil Durk was welcomed back to LIV, where he took over the stage and had the crowd going wild with his performance. Scott Disick, John Wall, and Zoey Dollaz were all seen hanging in VIP, ordering endless bottle parades, as partygoers danced the night away.

All the partygoers made their way to Story on Saturday, where Sickick took over the decks and played an incredible set. Guests were dancing under the neon lights and ordering endless bottle parades.

Komodo was packed from wall to wall on Saturday night as guests enjoyed a delicious dinner before heading to the trendy upstairs lounge, where partygoers hit the dance floor and were singing to the great beats played by DJ Iron Lyon.

Sparklers lit up the outdoor courtyard as guests enjoyed Swan‘s iconic Mon Cheri Mondays. Partygoers enjoyed delicious cuisine and hand-crafted cocktails at the dinner party before heading up to the upstairs lounge to dance the night away.
KEEP MIAMI NEW TIMES FREE... Since we started Miami New Times, it has been defined as the free, independent voice of Miami, and we'd like to keep it that way. With local media under siege, it's more important than ever for us to rally support behind funding our local journalism. You can help by participating in our "I Support" program, allowing us to keep offering readers access to our incisive coverage of local news, food and culture with no paywalls.
Make a one-time donation today for as little as $1.