On Friday, Vecinos Market Miami will host a live collaboration between chef Jose Mendin and Bar Lab. Chef Mendin will demonstrate how to prepare mofongo de carne guisada boricua (Puerto Rican beef stew), and Bar Lab bartenders will walk guests through their "Strawberry Fields Swizzle" cocktail. Attendees can sign up to follow along for free, then purchase the mofongo kit ($55) and add on Bar Lab's swizzle cocktail kit ($9.50). The mofongo serves four people. 7 p.m. on Friday, September 11. Sign up via eventbrite.com.

The Salty's flan doughnut is dipped in caramel glaze.
Photo courtesy of the Salty

Flan Doughnut at the Salty

The Salty is behind an all-new flan doughnut, made with 24-hour brioche dough, filled with homemade flan custard, and dipped in a caramel glaze with edible gold sparkles. The doughnut is available at both Salty locations (Wynwood and South Miami) while supplies last. Available at the Salty, 50 NW 23rd St., Miami; 305-925-8126; and 6022 S. Dixie Hwy., South Miami; 786-409-4714; saltydonut.com.

Pubbelly Sushi will launch its first-ever flagship beer, Yoshimoto blond ale, in October — but first, drop by a location near you this weekend to help choose the look of the signature brew. Through Sunday, enjoy a free taste of the ale and cast your vote for your favorite beer label. Each vote will also enter you for a chance to win Pubbelly Sushi prizes, including free "Butter Krab" rolls, gift cards, and DIY sushi kits. Various locations; pubbellyglobal.com.

The new Caja Caliente truck will reside in Miami's Design District, where it will serve as a delivery hub for neighboring areas including Wynwood, Edgewater, and the Upper Eastside. There's shaded outdoor seating for those who wish to grab their food to-go and eat on-site. The menu is based on the brand's classic Cuban tacos as well as a one-of-a-kind pop-up creations. That means everything from collaborations dishes with local chefs to breakfast specials on the weekends with new cinnamon-roll pancakes and arroz con pollo or "Cuban lasagna," with layers of picadillo, fried sweet plantains, and cheese ($3 to $20). 95 NE 40th St., Miami; caja-caliente.com.

Veza Sur Brewing Co. is keeping cool with the release of hard seltzers, available in two flavors: mango and passionfruit. Full of flavor and low on carbs and calories, Veza Sur’s new hard seltzers are 5.6 percent alcohol by volume and are available for takeout from the brewery in Wynwood in Veza Sur’s 32-ounce crowlers, priced at $12 apiece. 55 NW 25th St., Miami; 786-362-6300; vezasur.com. 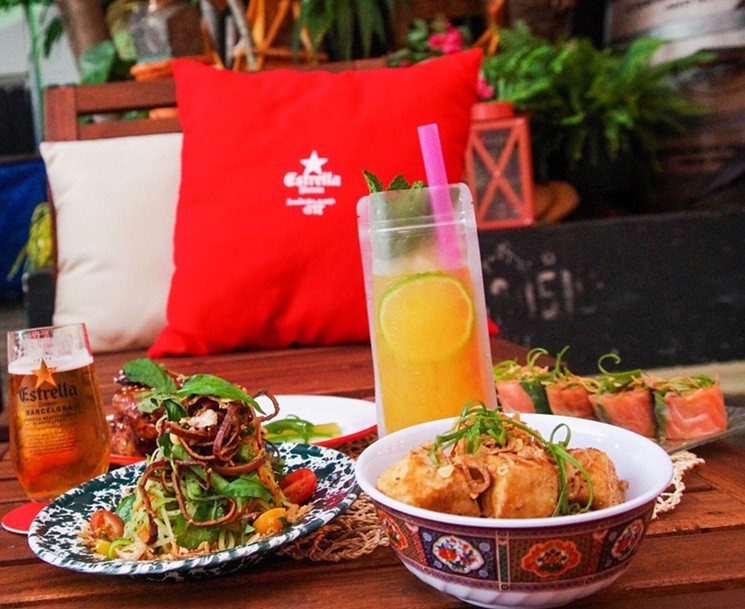 James Beard Award-winning chef Michael Schwartz is taking you into his home kitchen this Sunday evening for a live-streamed cooking class. The chef teamed up with Chefstreams for this event to virtually demonstrate two of his favorite dishes. Learn how to make crispy pan-roasted chicken thighs with carrots, tahini sauce, seeds, and herbs; and a lentil salad. Tickets are $30, which includes access to the live class, a recipe-book PDF with step-by-step cooking instructions for each dish, and a full recording of the class after its completion, so the chef can guide you any time you like. 7 p.m. on Sunday, September 13. Tickets cost $30 via chefstreams.com.
KEEP MIAMI NEW TIMES FREE... Since we started Miami New Times, it has been defined as the free, independent voice of Miami, and we'd like to keep it that way. With local media under siege, it's more important than ever for us to rally support behind funding our local journalism. You can help by participating in our "I Support" program, allowing us to keep offering readers access to our incisive coverage of local news, food and culture with no paywalls.
Make a one-time donation today for as little as $1.