Fact-Checking the Five Most Common Myths About Miami Sports Fans 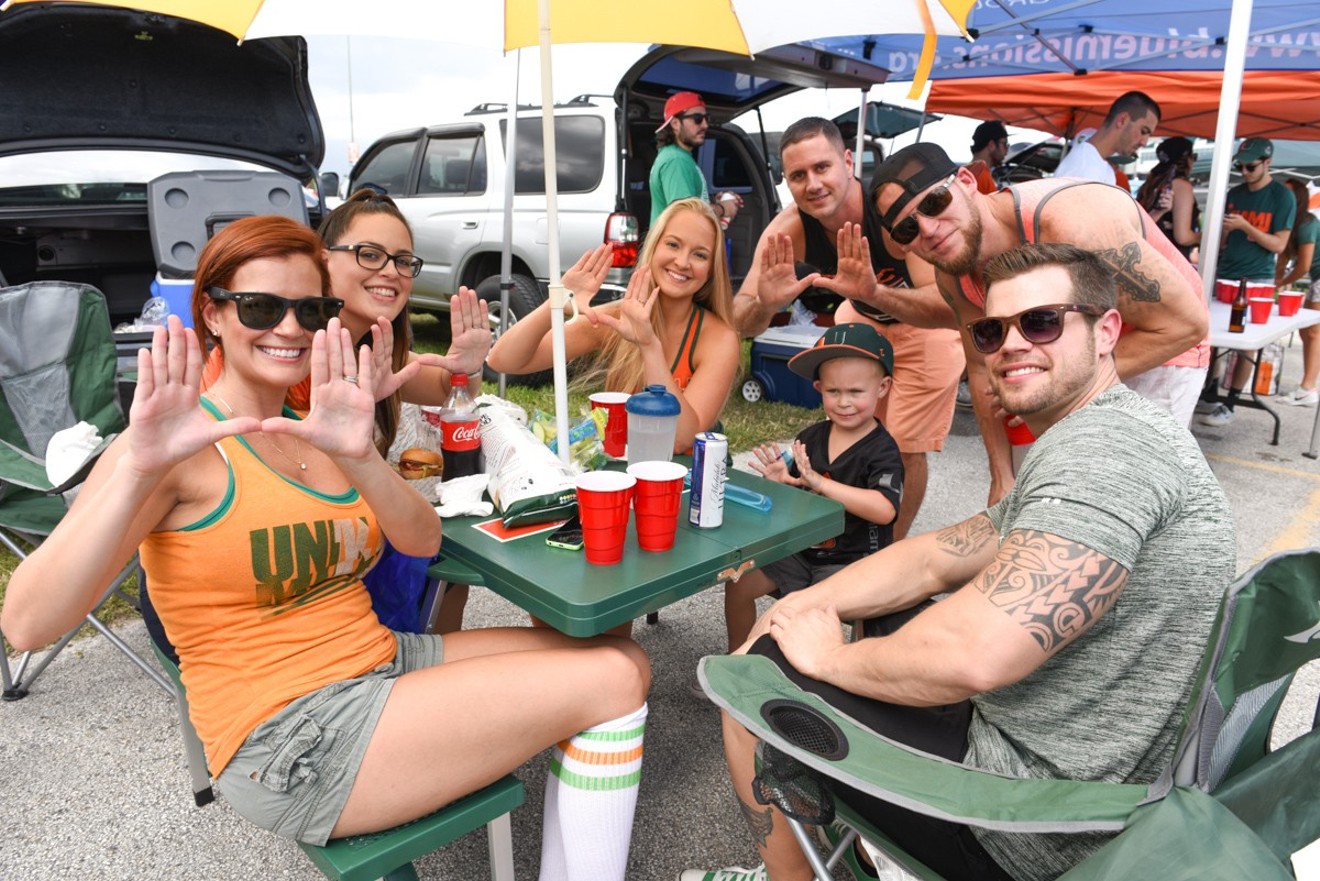 The perception of Miami sports fans is wildly inaccurate. Photo by Christina Mendenhall
We're living in an era of alternative facts. Up is down if you say so enough times. People believe what they want to believe as long as it makes them feel better and, more important, confirms something they believe to be true.

This brings us to the perception of Miami sports fans in general. It's wildly inaccurate at best, racist at worst, and, most of the time, just plain wrong. Miami sports fans matter to outsiders only when their teams are a threat or when it's convenient to kick them when they're down.

Here are five untruths that outsiders try to claim about Miami sports fans.

Miami Heat at American Airlines Arena
Photo by Guillaume Capron / Flickr
1. Miami sports fans show up only when their team is winning. Before LeBron James came to Miami, there wasn't really this narrative that Miamians were fair-weather fans. Since 2010, however, it's become a thing to poke fun at Miami when the stadium, arena, or park isn't completely full the moment the game begins. In reality, almost every fan base is this way. Winners get full support. Losers get poor support. Everything in the middle is forgettable.

Here are the facts: The Miami Dolphins, for the most part, always finish right in the middle of the pack when it comes to attendance numbers. We're talking 13th to 21st out of 32 teams, give or take one outlier season. The Heat has consistently — before, during, and after LeBron — drawn huge support. Many times Heat attendance has landed in the top five, including last season.

The Marlins get the sort of attendance they have deserved over the years — equal to their play if they're lucky. What they've put their fans through would cause most teams to relocate due to lack of interest. Photos of an empty Marlins Park are all the rage, though, when it comes to Fish games. 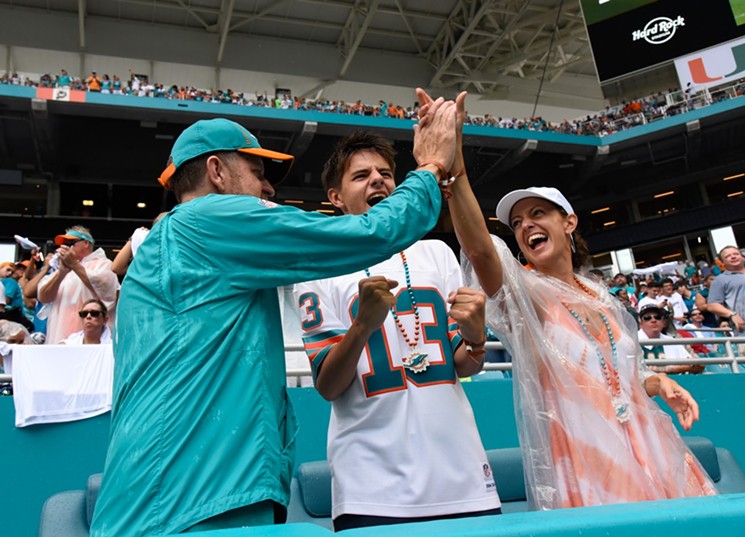 Photo by Michele Eve Sandberg
2. Because they're too quiet, Miami fans must not be as passionate about their teams. Somewhere along the way, this became a thing: Miami fans sit on their hands far too often and for far too long to give a crap about the game. They must be posting pictures on Instagram and eating stadium ceviche. Wait, those last two things are true, but that isn't why Miami fans aren't wild-and-crazy-in-your-face like, say, Buffalo Bills fans.

Maybe you're the weird ones, OK? Maybe you gotta chill out. Maybe your team's fans need to learn how to act.

Do you want to know why Dolphins fans don't dive off their cars onto folding tables before games or why Heat fans don't rant and rave for the entire 48 minutes of a basketball game? It's because we do things in Miami differently — mainly because it's different in Miami. Would Cleveland Browns fans still paint their faces and wear dog masks to games if they lived by the beach and were ten minutes from a staycation after work every day? You decide, but that's our truth.

Like it or not, Miami fans simply aren't taking this sports thing as seriously as some other fan bases around the country. We have other stuff going on, OK? We're good. A loss hurts, but we aren't gonna catch a felony or get our ass kicked so Josh Rosen can hear our voices in the stands.

Tim Elfrink
3. Miami Marlins fans are spoiled and/or don't exist. Owing to photos of empty ballparks and the fact that the Marlins have made the playoffs all of two times since their inception in 1993 (and just so happened to win the World Series both times), outsiders don't respect Marlins fans. The book on us is that Fish fans show up only when the team is good — and when it is good, Marlins fans get a World Series like it's nothing.

There are cities that have never won a title in any sport, much less MLB. The Chicago Cubs went 100 damn years between titles, so you can see how their fans might hold a grudge after watching newbie Marlins fans throw parades for their baseball team in 1997 and 2003. The fact of the matter is Marlins fans have had enough suffering in their existence to last a century. No team's fans have ever had more soon-to-be Hall of Fame players ripped off their roster — by the team's own doing — than the Marlins. It's one thing to watch a player leave in free agency; it's another to see the team trade Miguel Cabrera in his prime for a bag of balls.

Marlins fans exist, and they are tired, man. Any other city would have a similar reaction if it had been through what this fan base has endured. 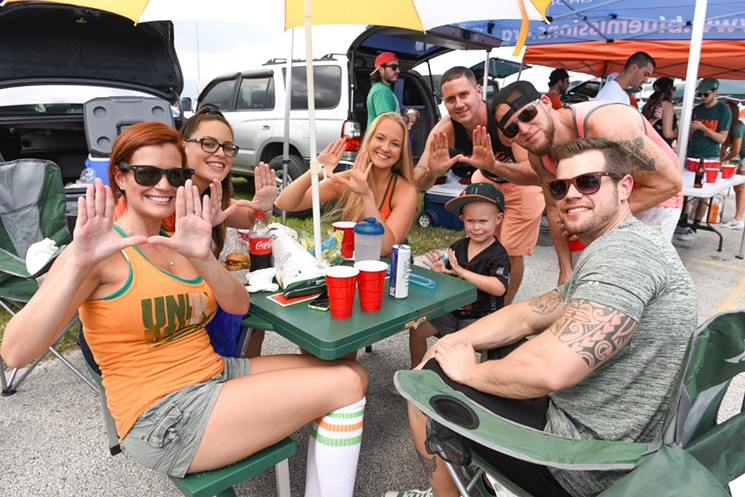 The perception of Miami sports fans is wildly inaccurate.
Photo by Christina Mendenhall
4. All Miami Hurricanes fans are obnoxious. To be fair, this one somewhat checks out. If you conflate confidence and cockiness with obnoxiousness, that's on you, but we can see how you'd feel that way. Hurricanes fans have a reputation for being — how should we say this — annoying as shit.

Not until the past few seasons, when the turnover chain became a thing, did the nation see one redeeming quality in the Hurricanes or its fans. The reality of the matter is a lot of Canes fans are superchill, quiet, family-oriented, and just excited about getting out and doing something fun on a Saturday afternoon in beautiful weather.

Not every Miami fan is drunk off a case of Coors and throwing a "U" in your face every chance they get. Many are, but not all. Please correct the record. 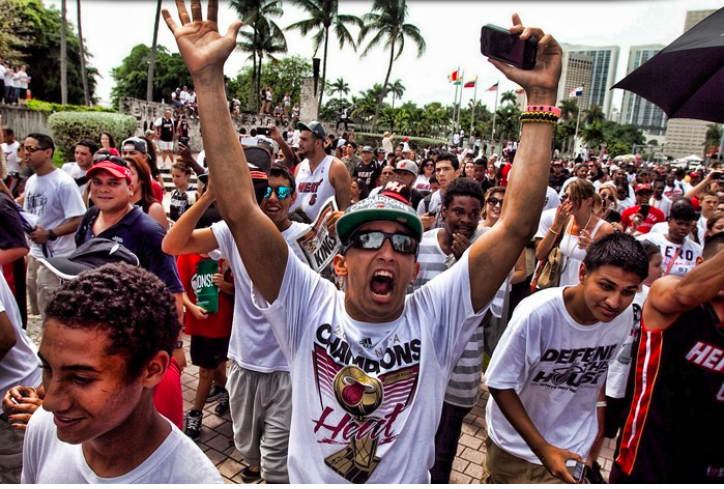 Photo by George Martinez
5. Miami fans somehow care about a player's country of origin. This one pertains to the Marlins more than any other team. For some reason, everyone assumes more people will show up at the ballpark if the players hail from the same country as the fans. This has never been proven to be true, yet every time a Cuban player is available, it's instantly assumed signing him will fill seats.

News flash: Miami loves a winner no matter where they are from or what they look like. South Florida, more than most any other place in America, doesn't see race or color. We see fun, entertainment, and good people. It's sort of beneath the fan base to expect anything less. Marlins fans rooted for Christian Yelich as hard as they will root for Victor Mesa Jr. when he gets to the big leagues.
KEEP MIAMI NEW TIMES FREE... Since we started Miami New Times, it has been defined as the free, independent voice of Miami, and we'd like to keep it that way. With local media under siege, it's more important than ever for us to rally support behind funding our local journalism. You can help by participating in our "I Support" program, allowing us to keep offering readers access to our incisive coverage of local news, food and culture with no paywalls.
Make a one-time donation today for as little as $1.