On Friday, Joe's Stone Crab opens for its 108th season. The Miami Beach restaurant, which has been around longer than the city in which it resides, opens for dinner at 5 p.m. sharp, with the bar opening at 4 p.m. for people who want to get a leg up on securing a table (and a drink while they wait). If you're still wary about dining in, Joe's Take Away, located right next door, serves the same stone crabs to-go. Order claws and sides and take them one block to the beach for the ultimate social distancing picnic. 11 Washington Ave., Miami Beach; 305-673-0365; joesstonecrab.com. Opens for the season on Friday, October 15, for dinner from 5 to 10 p.m. Sunday to Thursday and 5 to 11 p.m. Friday and Saturday. Open for lunch starting Saturday, October 16, from 11:30 a.m. to 2:30 p.m.and then Thursday through Sunday thereafter (closed for lunch Monday through Wednesday). Joe's Takeaway is open 11:30 a.m. to 9 p.m. Tuesday through Sunday (closed Monday).

Get schooled at Hogwharf.
Photo courtesy of Breakwater Hospitality Group

Hogwharf at the Wharf Fort Lauderdale

The Wharf Fort Lauderdale is turning into Hogwarts School of Witchcraft and Wizardry this weekend. Harry Potter fans can delight in magical drinks like a rum-spike Butterbeer ($10). The weekend is filled with live entertainment, giveaways, and (of course) plenty of photo ops for the 'Gram.  Admission is free but you can RSVP at eventbrite and receive a free Hogwharf scarf. Friday, October 15 to Sunday, October 17 from 4 p.m. to midnight at 20 W. Las Olas Blvd., Fort Lauderdale; 954-372-7606; wharfftl.com. 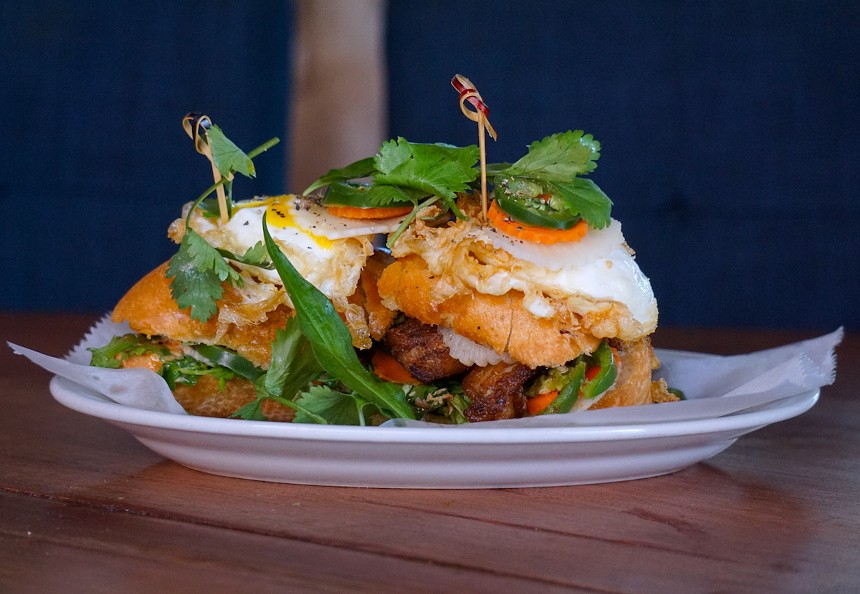 The breakfast báhn-mì from Phuc Yea is part of its new brunch-menu rollout.
Photo courtesy of Phuc Yea

Spend your Sunday at Phuc Yea, and enjoy a selection of crave-worthy brunch dishes. Highlights include "Biskits ’n Gravy," which includes buttermilk biscuits paired with andouille and Chinese sausage gravy served with a fried egg; a "Salt ’n Peppa" shrimp croissant loaded with crispy-fried popcorn shrimp, house pickles, and sriracha aioli on a Flour & Weirdoughs croissant; a breakfast banh mi with roasted pork and fried egg, topped with sriracha aioli; and the Coca-Cola glazed duck confit and waffles. Shareable drinks for the table range from the "Phuong’s Den," a riff on a spicy margarita made with jalapeño-infused, tequila, vermouth, cucumber, cilantro, lime, and kimchee chili rim; to the "Queen’s Bee Potion," Phuc Yea’s version of a guava daiquiri. Noon to 3 p.m. Sundays, at Phuc Yea, 7100 Biscayne Blvd., Miami; 305-602-3710; phucyea.com.

Inside Showfields on Lincoln Road.
Photo by Karli Evans

Complimentary happy hour, anyone? Hosted by Diageo at Showfields on Lincoln Road, the Cocktalian Speakeasy will serve complimentary cocktails crafted by skilled mixologists, including signature drinks like the "Crown Royal Apple Fuego" and the "Cîroc Blue Storm." 3 to 6 p.m. Sunday, October 17, at Showfields, 530 Lincoln Rd., Miami Beach; 305-351-0672; showfields.com. Admission is free with RSVP via eventbrite.com.
KEEP MIAMI NEW TIMES FREE... Since we started Miami New Times, it has been defined as the free, independent voice of Miami, and we'd like to keep it that way. With local media under siege, it's more important than ever for us to rally support behind funding our local journalism. You can help by participating in our "I Support" program, allowing us to keep offering readers access to our incisive coverage of local news, food and culture with no paywalls.
Make a one-time donation today for as little as $1.