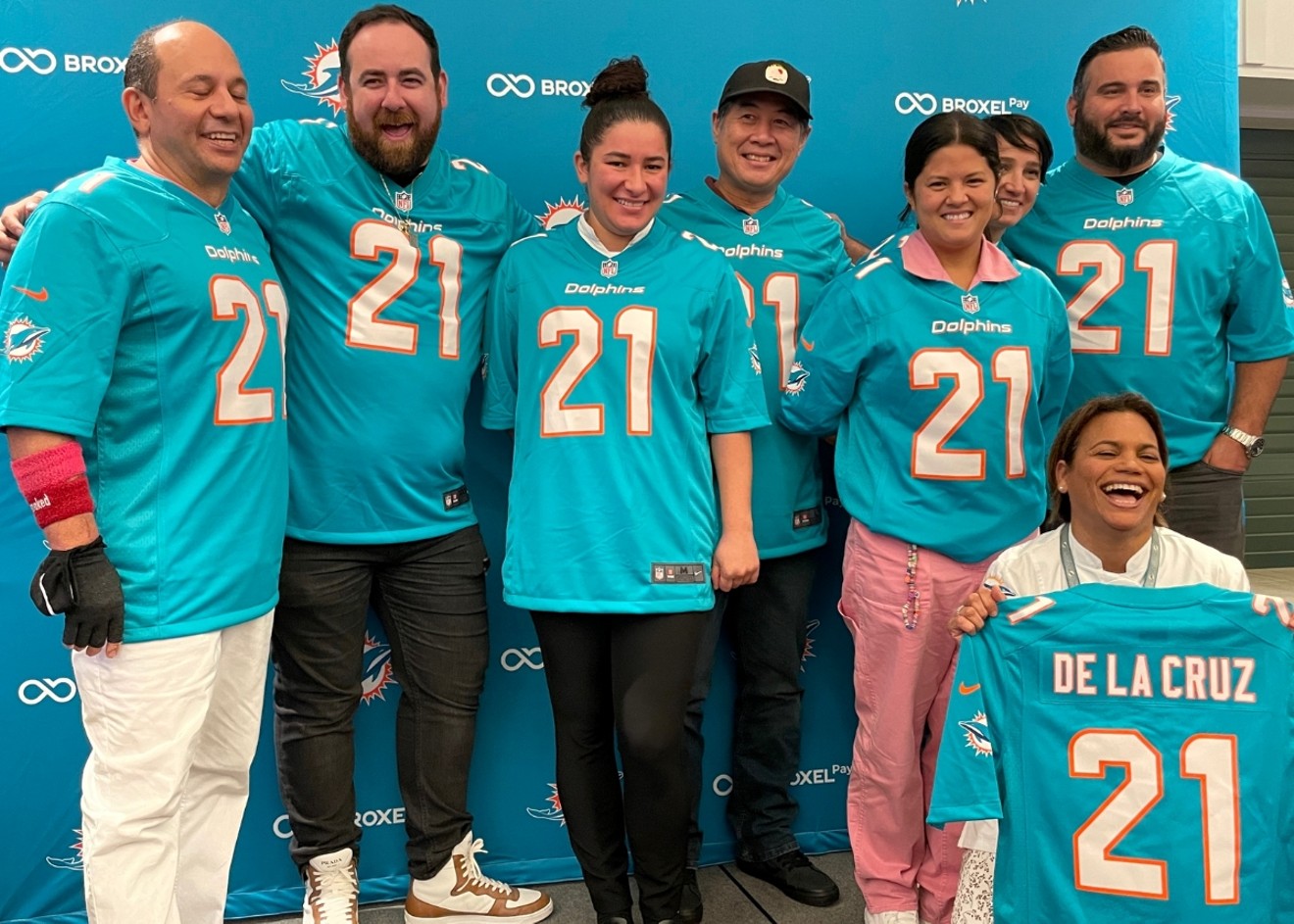 A Miami dream team of chefs will offer food at Hard Rock Stadium. Photo by Laine Doss
When the Miami Dolphins take the field Sunday, September 19, against the Buffalo Bills, fans at Hard Rock Stadium will be treated to new amenities and food options.

This year the team is welcoming back fans at full capacity — fans who will, no doubt, be extra eager to experience live sports. So what are 65,326 people going to eat at the game?

A lot of food from local vendors. 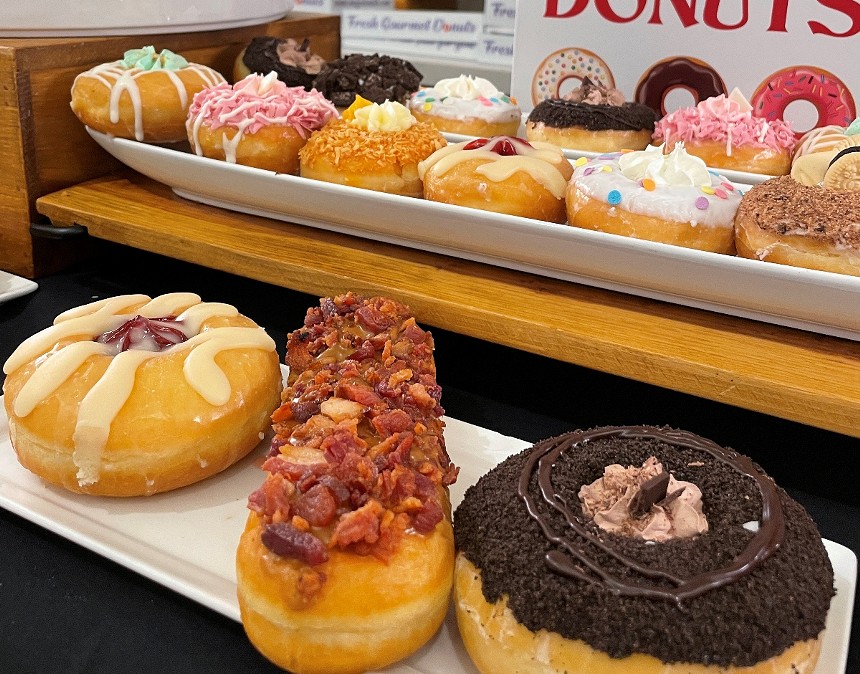 Mojo Donuts returns to Hard Rock Stadium.
Photo by Laine Doss
Hard Rock Stadium has consistently tapped local restaurateurs as partners, including favorites like Mojo Donuts, Chef Creole, Versailles, King of Racks, Ella Cafe, and Chef Creole. About 70 percent of food offered at the stadium is the result of a partnership with a local vendor.

This year, three Miami eateries that were past food truck partners at the stadium — Cheeseburger Baby, Seed, and Fishology — will open new concession stands at the stadium.

Pollo Tropical — AKA the "official pollo" of the stadium — will be offered at locations on the stadium's 100 and 300 levels.

The stadium has also announced Heineken's partnership with the Dolphins, the beer brand's first such arrangement with an NFL team.

Though a lot of Heineken will pour at eight branded bars throughout the stadium, fans of craft beer can find local brews at two taprooms on the 100 level and a craft beer bar on the 300 level. One such beer is a new Veza Sur collaboration with the Dolphins: Born and Raised, a 4.9 percent ABV blood orange kölsch. (If you want to sample it, Veza Sur will be offering Born and Raised at its brewery (55 NW 25th St.) on Thursday, September 16, from 5 to 7 p.m. Dolphins season ticket holders will receive a free exclusive Miami Dolphins x Veza Sur “Born and Raised” crowler.)

Dolphins executive chef Dayanny De La Cruz says this year is one of renewal and sustainability. "We are reinventing ourselves and coming out with new ideas," she says, explaining that the stadium is now plastic-free and equipped with three compost digesters. After each game, all unused food is donated to Food Rescue Miami.

De La Cruz is also in charge of a dedicated kitchen that produces food specifically for people with allergies to eggs, dairy, nuts, and salt. "We're piggybacking on our family-friendly environment," she says. "You don't have to pack your food in a bag any longer." 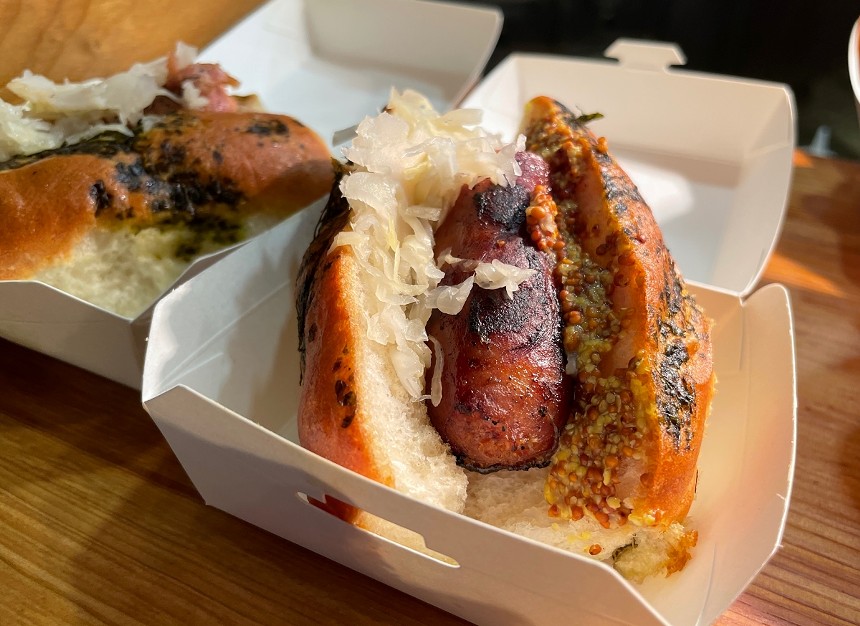 Says De La Cruz: "This is a dream team. I can feel the energy."

Though the average Dolfan likely won't experience the food at the luxury clubs, De La Cruz teases the possibility that the chefs might bring their talents to the stadium at large so everyone can enjoy.

"I think this is the beginning of a beautiful relationship," she says.

Hard Rock Stadium. 347 Don Shula Dr., Miami Gardens; 305-943-8000; hardrockstadium.com.
KEEP MIAMI NEW TIMES FREE... Since we started Miami New Times, it has been defined as the free, independent voice of Miami, and we'd like to keep it that way. With local media under siege, it's more important than ever for us to rally support behind funding our local journalism. You can help by participating in our "I Support" program, allowing us to keep offering readers access to our incisive coverage of local news, food and culture with no paywalls.
Make a one-time donation today for as little as $1.