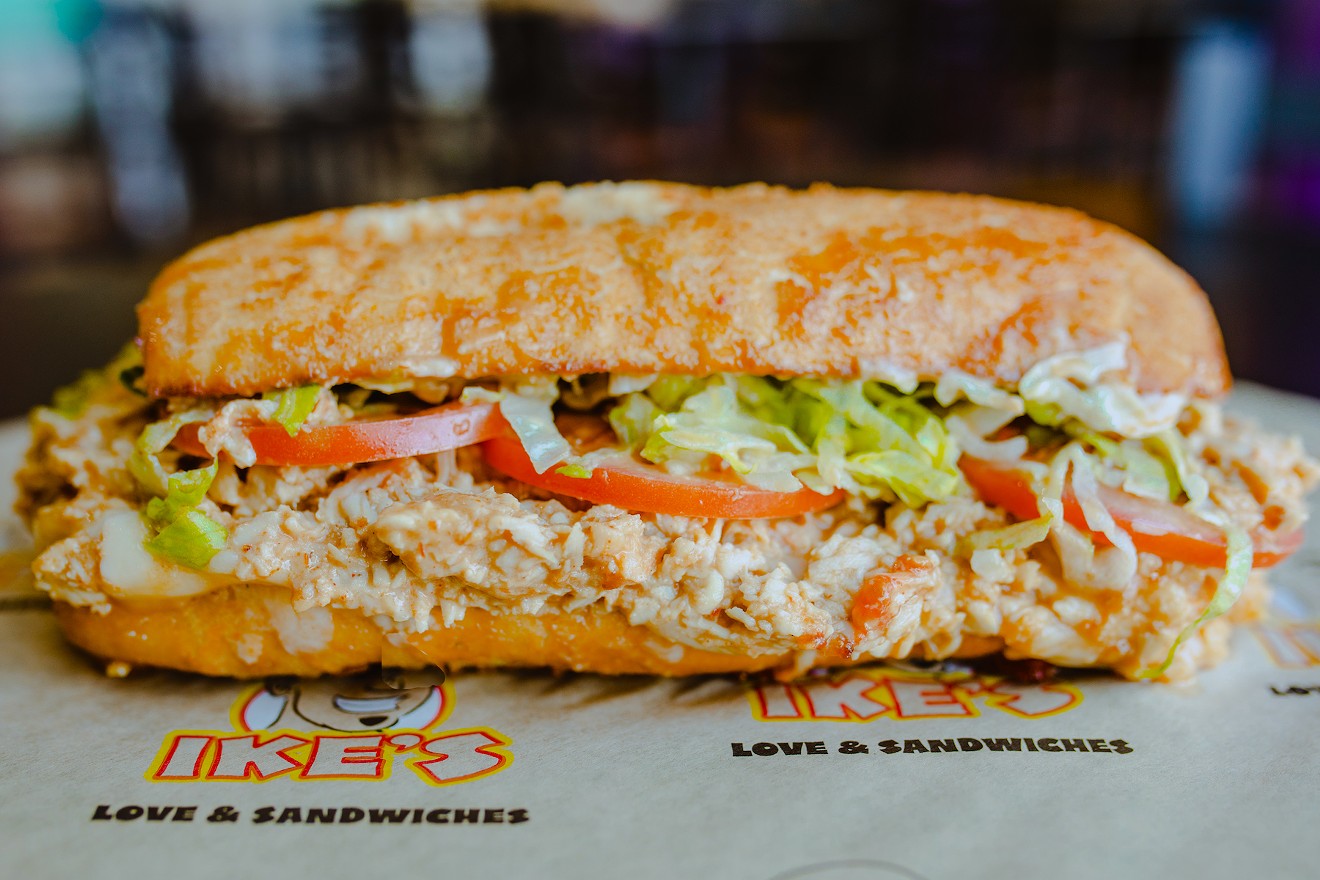 The sandwich shop is in its soft-opening phase, with the official opening set for Friday, October 9, at 11 a.m. On Friday, the new location will offer $5 sandwiches all day. In addition, the first 50 people in line who follow Ike’s on social media will receive a free sandwich and T-shirt and will be entered into a raffle for a chance to win a free sandwich each week for one year.

On opening day, the Aventura franchise store owner John Green and his son, Carolina Panthers offensive lineman John Miller, will be in attendance alongside Ike's founder Ike Shehadeh. They will be available to greet customers, take photos, and sign autographs.

"When my son and I discovered Ike’s Love & Sandwiches, we knew they were the one," Green tells New Times. "From the huge variety of sandwiches and sauces to the options for people following vegan, vegetarian, and gluten-free diets, we knew we had to bring this home to South Florida."

Ike’s Love & Sandwiches opened in San Francisco in 2007 under the name Ike’s Place. The small sandwich shop developed a cult and celebrity following and still does frequent collaborations with famous athletes and celebrities who develop their own sandwich creations — including the Madison Bumgarner, the Andre S.O.G. Ward, and the Adam Richmond.

Today, the brand is best known for its more than 700 sandwich combinations and a menu with options for meat lovers, vegans, vegetarians, and those who eat gluten-free. The pop culture-inspired sandwich selections are served on the chain's own "Dutch Crunch" bread, a San Francisco-style white made with a rice flour coating that bakes into a crisp shell, and finished with Ike’s Dirty Sauce, the house garlic aioli that's also spread on — and baked into — every sandwich.

Favorites for carnivores include the "Matt Cain," a combination of roast beef, salami, turkey, the chain's own godfather sauce, and provolone cheese; and the "Jaymee Sirewich," made with fried chicken, Ike’s yellow barbecue sauce, ranch dressing, and pepper jack cheese. Among the vegetarian and vegan options, the "Meatless Mike" (vegan meatballs and marinara) and the "Handsome Owl" (vegan chicken with teriyaki sauce) are popular.

The best part: Each location opens with its own exclusive sandwiches. In Miami, that means you'll find regional newbies like the "Tom Brady," a vegan chicken sandwich with Italian dressing, mushrooms, avocado, and cheddar cheese ($13.50); and the "Dan Marino," a combination of tuna, bacon, avocado, and American cheese ($9.99).

Of course you can't enter the sandwich game in Miami without a nod to Mr. 305 himself. The "No, I'm Not Pitbull" is made with fried chicken, zesty barbecue sauce, and cheddar cheese ($12). ¡Dale!

Ike’s Love & Sandwiches. 18719 Biscayne Blvd., Aventura; loveandsandwiches.com.
KEEP MIAMI NEW TIMES FREE... Since we started Miami New Times, it has been defined as the free, independent voice of Miami, and we'd like to keep it that way. With local media under siege, it's more important than ever for us to rally support behind funding our local journalism. You can help by participating in our "I Support" program, allowing us to keep offering readers access to our incisive coverage of local news, food and culture with no paywalls.
Make a one-time donation today for as little as $1.