NYC's Brooklyn Dumpling Shop is Headed to Wynwood: Here's What to Expect 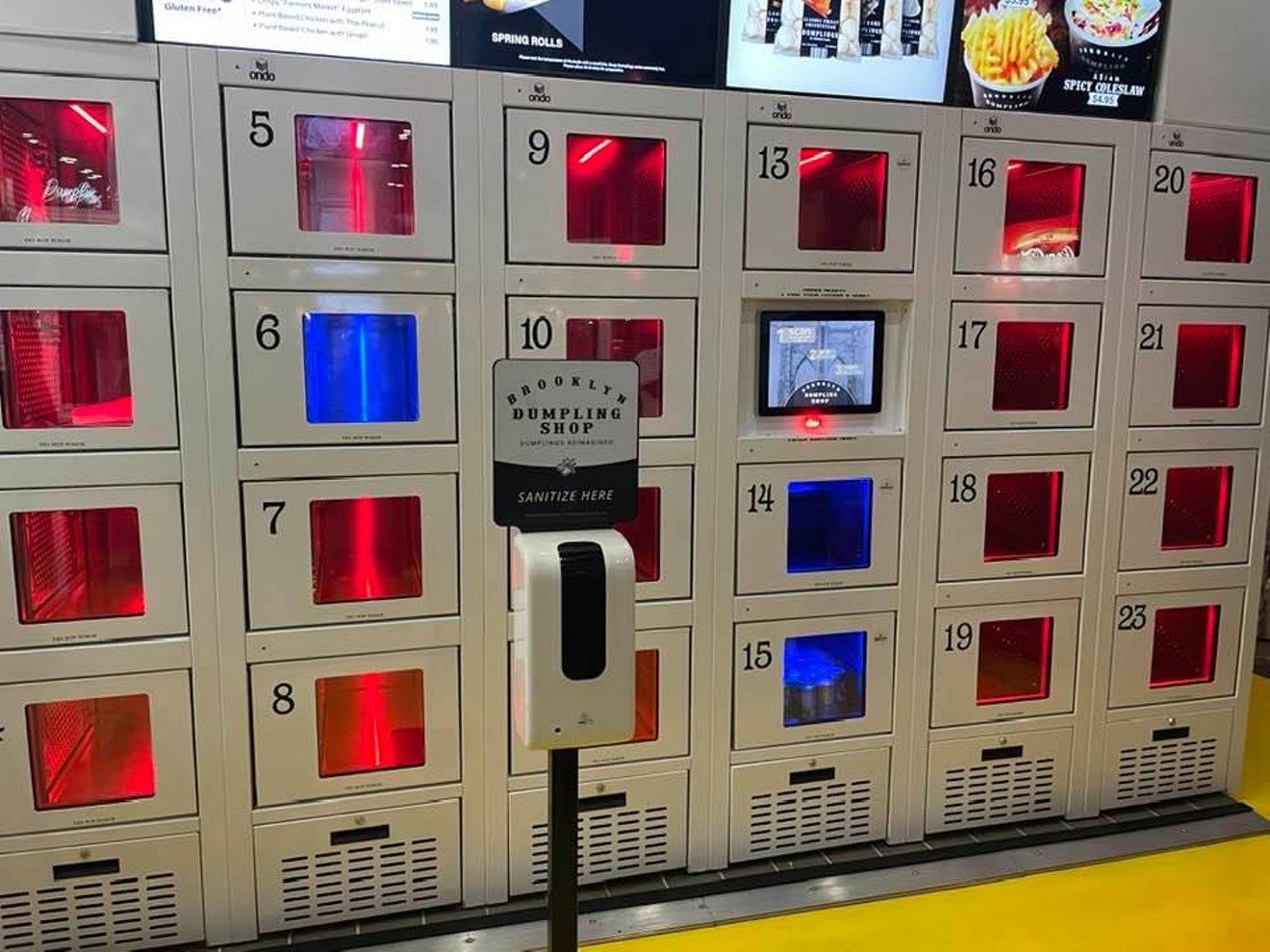 The dumpling lockers at Brooklyn Dumpling Shop. Photo by Laine Doss
In May 2021, as New York City was still reeling from a pandemic that shook the city to its core, a restaurant opened that was perfect for life during the time of COVID, supplying comfort food and social distancing at the same time.

Brooklyn Dumpling Shop, located in Manhattan's East Village, offers contactless ordering and delivery of a variety of novelty dumplings. You order your meal on a screen, swipe your credit card, and then wait in front of what looks like a wall of microwave ovens until your ticket number flashes on a screen with a corresponding locker number. Voilà! The locker opens and you extract your meal.

For this, we have Stratis Morfogen, a New York-based restaurateur, to thank. Miamians might know Morfogen from his now-closed South Beach collaboration with chef Philippe Chow. In New York, Morfogen is behind heavy hitters like Jue Lan Club and Brooklyn Chop House with partners Robert ”Don Pooh” Cummins and Dave Thomas.

Morfogen is no stranger to dumplings. In December 2020, he published Damn Good Dumplings, a book that includes recipes for 60 different varieties of boiled- and steamed-dough dumplings.

Even as Morfogen was preparing to open the first Brooklyn Dumpling Shop, he let it be known that he envisioned a shop at the Oculus Transportation Hub in New York City, and another in Hoboken, New Jersey. He also planned to expand to Connecticut, Texas, and eight different countries.

Oh, and, it seems, Florida. Franchisee Marc Silverstone recently inked a deal to open five shops in the Sunshine State. Though exact locations have not yet been disclosed, Brooklyn Dumpling Shop's website teases Broward County, Orlando, and Miami as "coming soon." And, in a press release, Wynwood was targeted as one of the neighborhoods that can expect a shop.

Last weekend, as it happens, I was in New York City, where I dropped in to the Brooklyn Dumpling flagship.

The shop is small and resembles a space-age locker room more than an automat. In the front, behind thick Plexiglas, you can see a small-scale dumpling assembly line of about a half-dozen people making dumplings. Though are looking at them when you order, there's no interaction. Instead, a touchpad offers a menu in four categories: specialty dumplings, classic potstickers, seafood dumplings, and veggie dumplings. There are also gluten-free dumplings, soup dumplings, fried wontons, breakfast cro'sumplings (flaky pastry dumplings), dessert dumplings, and spring rolls.

After placing your order, a receipt is printed with a bar code. You then proceed to the locker wall to wait in front of a message board that displays the status of pending orders.  When yours is ready, a locker number pops up. When you scan your barcode, the locker opens and, yes, voilà!

The process is both straightforward and confusing. So much so that — in a completely automated eatery — one lone employee stood in front of the lockers to help first-time customers navigate the process. 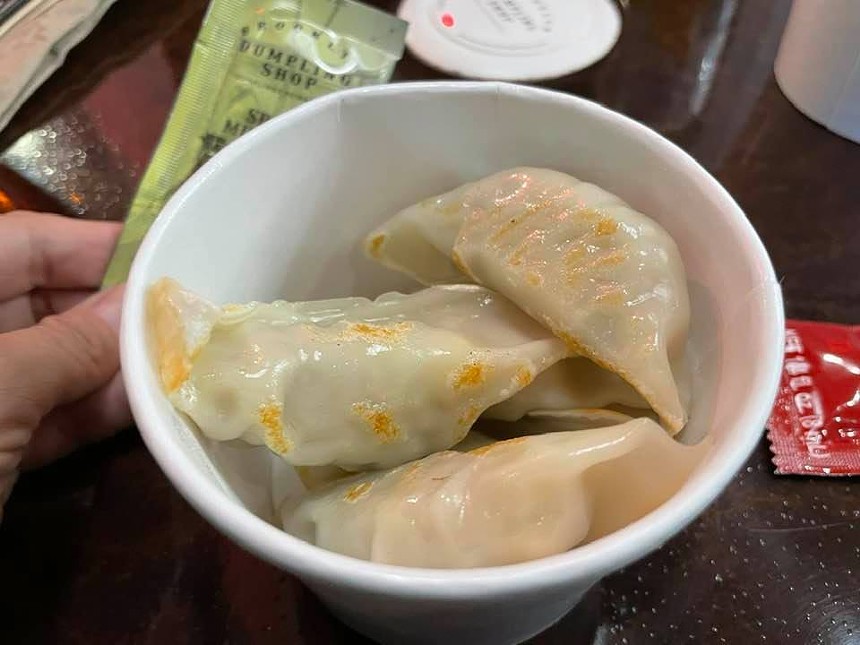 Chicken lemongrass potstickers at Brooklyn Dumpling Shop in Manhattan
Photo by Laine Doss
The food is served in soup containers and dumplings come three to five per container. There are Asian-inspired versions as well as more far-flung creations like chicken Parm, Reuben, and Philly cheesesteak.

The chicken lemongrass potstickers (five for $5) were tasty, firm, and fresh. The pastrami dumplings (three for $6) had the texture of a meat knish or empanada more than a dumpling. Served with spicy mustard, they were unorthodox but fine. Pepperoni dumplings (three for $5) reminded me of something I couldn't pinpoint at first. Until it hit: They tasted exactly like Totino's pizza rolls.

On a Saturday evening at 9 p.m., New York City's Lower East Side was packed with people spilling out from bars and taverns. A local takeout-only restaurant had a line that snaked past the kitten-adoption place next door, its patrons waving to the felines while they waited for their sandwiches and plant-based ice creams.

The Brooklyn Dumpling Shop wasn't very busy. Though the dumplings make a good snack, the automat concept feels gimmicky: The contactless ordering is smart, but the lockers seem an unnecessary step.

The Brooklyn Dumpling Shop certainly has a place in this world. Airports, train stations, hospitals, and college campuses come to mind as perfect locations for a super-fast-casual place to infuse some speedy nourishment.

When the Wynwood shop opens (no date has been announced), there's sure to be an audience for a place to grab a snack 24 hours a day. After all, there are few places to soak up your alcohol after a night of partying.
KEEP MIAMI NEW TIMES FREE... Since we started Miami New Times, it has been defined as the free, independent voice of Miami, and we'd like to keep it that way. With local media under siege, it's more important than ever for us to rally support behind funding our local journalism. You can help by participating in our "I Support" program, allowing us to keep offering readers access to our incisive coverage of local news, food and culture with no paywalls.
Make a one-time donation today for as little as $1.