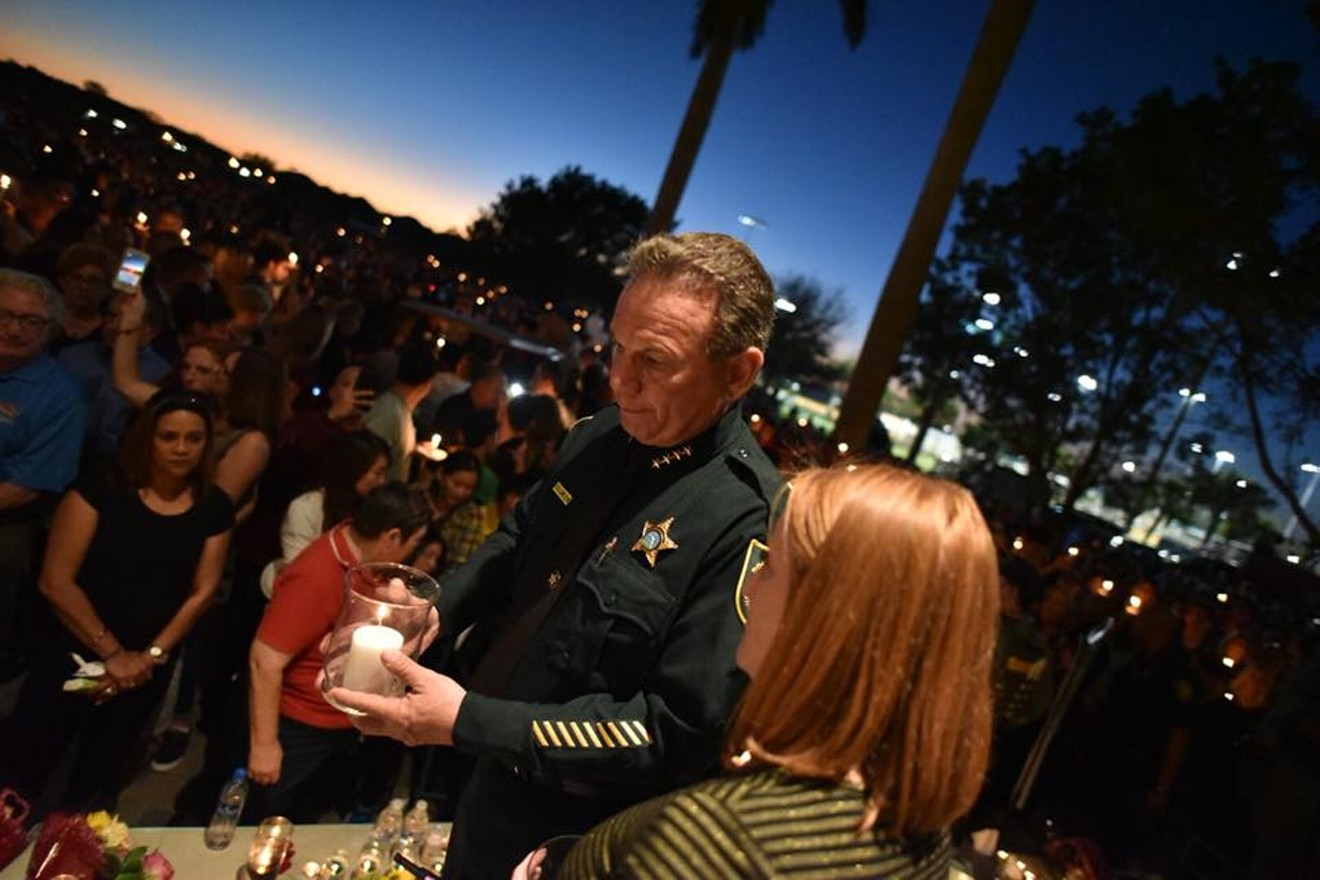 So, newly elected Governor Ron DeSantis removed Israel on Friday and replaced him with Gregory Tony, a Coral Springs Police sergeant who'd been praised by multiple parents of slain Stoneman Douglas kids. Israel's many critics say that removing the sheriff appeared to be the right move — and not just due to the MSD tragedy. Here's a primer on a few other major scandals that occurred during Israel's time running America's largest accredited sheriff's office:

In 2013, Jermaine McBean, a 33-year-old information technology worker, was walking home while wearing earbuds and carrying an unloaded air rifle. Someone thought the gun was real and called the cops. Broward Sheriff's Dep. Peter Peraza then killed McBean.

Peraza later claimed he was forced to kill the 33-year-old in self-defense. He cited Florida's controversial and demonstrably racist Stand Your Ground law. That was a novel and largely unheard-of use of the statute. While civil-rights advocates worried Peraza's defense set a concerning precedent, the Florida Supreme Court today unanimously affirmed that on-duty cops can claim they are "standing their ground" when killing citizens.

In layman's terms, the court ruled that, because the law gives stand-your-ground rights to all "persons" in Florida without making any distinctions for their jobs, cops can use the law to defend themselves while on duty.

"Put simply, a law enforcement officer is a 'person' whether on duty or off, and irrespective of whether the officer
is making an arrest," the court ruled. The judges also stated that Peraza was "immune from criminal prosecution."

The ruling is a victory for the National Rifle Association and Florida's top NRA lobbyist, Marion Hammer, who wrote the law in 2005. It is also a win for Florida cops and police unions, who already benefit from significant legal protections when they kill people while on duty. (It's worth noting that cops in other developed nations don't shoot civilians at even remotely the same rate as American police.)

As the gospel choir finished the last chords of "Going Up Yonder," Deborah Frazier approached her brother's powder-blue coffin. It was surrounded by heaping bouquets of baby's breath and blue roses. For a moment, the cavernous sanctuary of the Hopewell Missionary Baptist Church was silent except the sound of her sobs.

"Lord, have mercy," the elegant 59-year-old former teacher wailed as she reached out and pulled the lid closed. "Oh, my Lord, have mercy." Her legs buckled. Two ushers quickly grabbed her by the arms and carried her to her seat in the front pew. Then she collapsed.

For the past week, Frazier had carried herself with quiet dignity. Wearing a crisp black suit, glasses, and pearls, with her braids swept to the top of her head, she spoke with news crews in her Pompano Beach backyard. She faced down Sheriff Scott Israel and Broward State Attorney Michael Satz in an emergency community meeting. And she solemnly greeted hundreds of mourners at the wake and funeral.

But closing the casket on her brother Greg was more than she could bear.

A week before the funeral, Greg Frazier, age 56, was shot dead by Broward Sheriff's Office deputies while he was eating chicken wings. The story drew national attention, in part because it mirrored a disturbing trend. He had become yet another black man to die at the hands of police officers — the 178th such fatality this year in the United States and the 14th in Florida, according to a database updated by the Guardian. The Broward Sheriff's Office says it has suspended the deputies involved in the shooting but so far has refused to release their names.

"I've seen police brutality all over the country — I never thought I'd be part of one of those families," says Greg's soft-spoken 36-year-old son, Xavier, who flew in from Atlanta as soon as he'd heard the news. "I never thought my father would become a part of this horrible trend around the country, where police shoot first and ask questions later."


3. Repeated allegations of beatings inside his jails

Since the Parkland shooting last February, Broward Sheriff Scott Israel has been the target of a bunch of insane, conspiratorial fearmongering and outrage. He's been lambasted on InfoWars and attacked by National Rifle Association ghoul Dana Loesch.

But there are plenty of very real problems with the sheriff, including the fact that Israel's cops keep getting sued for beating people up inside the Broward Sheriff's Office jail in Fort Lauderdale. In several cases, there's been video and photographic evidence of seemingly unprovoked attacks inside the facility.

Now, yet another woman says she was permanently disfigured after being beaten and forcibly strip-searched by BSO jail guards, all because she got arrested for simple battery and allegedly holding a tiny amount of weed, and then refused to remove a ring on her finger that once belonged to her grandfather. In a new 92-page federal lawsuit, Sharone Gerstenhaber says that she was forcibly pepper-sprayed and beaten before the guards ripped her clothes off and left her fully nude. And after being attacked by the guards, Gerstenhaber says BSO lost the irreplaceable ring.

The ring "had been passed down to Gerstenhaber from her grandfather, a gift to him by her deceased grandmother at the time of their marriage in Israel in 1943 and had been engraved with the date of her grandparents’ marriage and her grandmother’s words in Hebrew, 'Rachael loves Leslie,'" the suit says.

Gerstenhaber's suit is at least the third case this year in which a woman has alleged that BSO jail guards attacked her.


4. His crime-lab was incorrectly using DNA evidence and employed a woman accused of mishandling drug-evidence

After New Times published a story last week about a whistleblower's complaint against the Broward Sheriff's Office Crime Lab — the whistleblower claimed BSO was mishandling of DNA evidence — NBC 6 (WTVJ-TV) reported Friday that BSO had suspended certain aspects of its DNA analysis program.

New Times has also obtained documents from the crime lab's accrediting body, the American Society of Crime Lab Directors Laboratory Accreditation Board (ASCLD-LAB), that show exactly which rules the crime lab, which handles evidence for thousands of criminal drug and DNA cases every year, was found to have violated. The ASCLD-LAB handed down its sanctions in April, but BSO has since appealed that decision.

The allegations could affect thousands of criminal cases in Broward County.

The report came after a private whistleblower, Boynton Beach forensics analyst Tiffany Roy, filed a complaint with the crime lab's accrediting body, the ASCLD-LAB, in October 2015. Roy, who'd been hired to retest a DNA sample swabbed from a knife handle, felt BSO had been incorrectly applying the "stochastic threshold," which tells analysts whether a DNA sample is "complete" enough to be used in a trial.

Roy claims BSO had been trumping up DNA samples and making them seem more useful than they were. "DNA is like a genetic description... like hair color, eye color, weight, birth mark, or a tattoo," she told New Times last week. "You can get a lot of mixable profile data, sort of like saying a perpetrator is a six-foot-tall black male in his twenties. Broward is taking the 'six-foot-tall black male' information and making it seem like it’s got more importance than it really does." Massive crime labs in Washington, D.C., and Austin, Texas, have been criticized for making the same error. BSO immediately disputed Roy's claims.

In May 2014, Deerfield Beach resident Louis Hilaire, 25, was contacted by his ex-girlfriend out of the blue.
"I've been looking for you," she allegedly said via Facebook message. She then called him on the phone, and the pair went out drinking the next night and, according to court documents, ended up having sex.

A few hours later, she revealed why she'd reached out to him: One of her friends, she said, worked as a housekeeper at the nearby Budgetel Inn in Pompano Beach, near the intersection of Atlantic Boulevard and the Coconut Creek Parkway. She went on: There was a safe in room 125 at the hotel, she said, which contained cash, jewelry, and a gun. And there was a housekeeper willing to give her and Hilaire a key to go steal the items inside, as long as the housekeeper got a cut of the loot. Hilaire, who had pleaded guilty in the past to charges of marijuana possession, attempted robbery, and aggravated battery with a deadly weapon, initially declined. But, according to court records, his ex pleaded with him to "please help her out," and eventually, he agreed.

Turns out, the woman was acting as a confidential informant for the Broward Sheriff's Office. Kevin Kulik, who represents Hilaire, says his client's case had been part of a repeated, unconstitutional sting operation by BSO's VIPER Unit. Kulik alleges the VIPER Unit is using "amorous" women to illegally entrap young, black offenders into committing crimes.