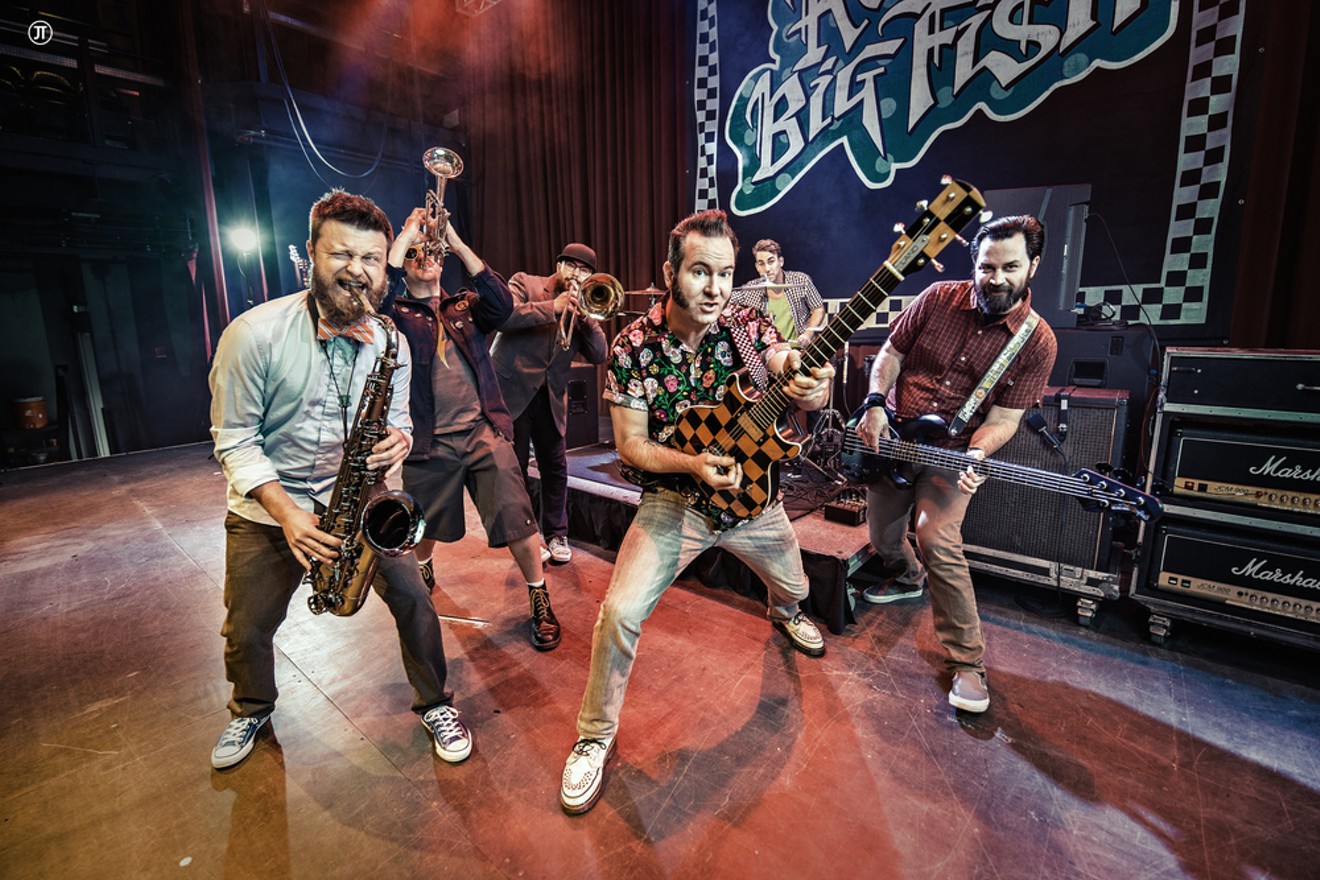 Jonathan Thorpe
Reel Big Fish started off at the perfect time for a ska band. Just as groups like No Doubt and Sublime began dominating rock radio in the mid-'90s, the Southern California six-piece started gaining attention for horn-heavy, punk-influenced ska. Ska's popularity has ebbed and flowed over the decades, but Reel Big Fish has continued touring, which has allowed singer Aaron Barrett to see firsthand that ska is as huge as ever. "I actually feel that ska has steadily grown more and more in popularity over the years." he says. "Sure, every decade or so there's a big ska hit on the radio and everybody screams 'next big thing' as fast as they yell 'it's dead!' But all the while, the music is spreading under the radar."

It wasn't a ska song that got a 12-year-old Barrett into music. "I heard 'Red Red Wine' by UB40 on the radio and I realized that I loved music," he says, "and that my whole life would revolve around it from then on." In 1992, Barrett joined a cover band in Huntington Beach that evolved into Reel Big Fish. When Barrett took over as lead singer, they began playing originals. But even though they were creating their own tunes, they couldn't stop performing ska renditions of popular favorites. They put their own spin on everything from A-ha's "Take On Me" to Van Morrison's "Brown Eyed Girl."

Barrett says those early dreams for Reel Big Fish were not modest. "I had the same rock-stardom, playing-stadiums, riding-around-in-limos, lighting-cigars-with-hundred-dollar-bills dreams that any young whippersnapper starting a band has."

After the release of their 1997 album, Turn the Radio Off, all of those dreams came true. Their song "Sell Out" was always on MTV, they headlined the Warped Tour, and they even got a cameo role in the 1998 comedy BASEketball. Their film debut sharing the screen with South Park creators Matt Parker and Tre Stone is a cherished memory for Barrett. "To be in a movie with them was mind-blowing," he says. "We couldn't believe it was really happening. Also, we filmed our scene the same day as all the cheerleader scenes, so that was fun to watch for us."

Though it has been two decades since the breakthrough record, Reel Big Fish rarely takes a break from the road. The current tour, which will hit Revolution Live Sunday, June 11, combines their passion for ska with another love: beer. The Beer Run Tour is advertised as "a day of ska, craft beer, and good times." Also onstage will be the Expendables, the Queers, and Tunnel Vision, and a craft beer garden will be set up for tastings. "Everybody in the band is really into craft beer, and we have a lot of friends at breweries all around the country, so it only seemed natural to try to make a beer event out of the tour. I can't believe we didn't do this sooner."

Besides one of their biggest hits being titled "Beer," the bandmates have dabbled in brewing their own concoctions, including most recently Reel Big Kolsch, brewed with Amplified Ale Works in San Diego.

Because of all the beer on hand, Barrett is certain this Sunday's event will be just as rowdy as every other South Florida appearance by Reel Big Fish, even if everything doesn't always go as planned. "I remember one show in the Miami area way back in the '90s, with Spring Heeled Jack. I was feeling extracrazy, so I thought I would smash my guitar Pete Townshend-style: I lifted it up over my head and brought it down as hard as I could, but my guitar was very sturdy, and instead of it smashing, it chopped the wooden monitor speaker right in half, which was pretty cool too."