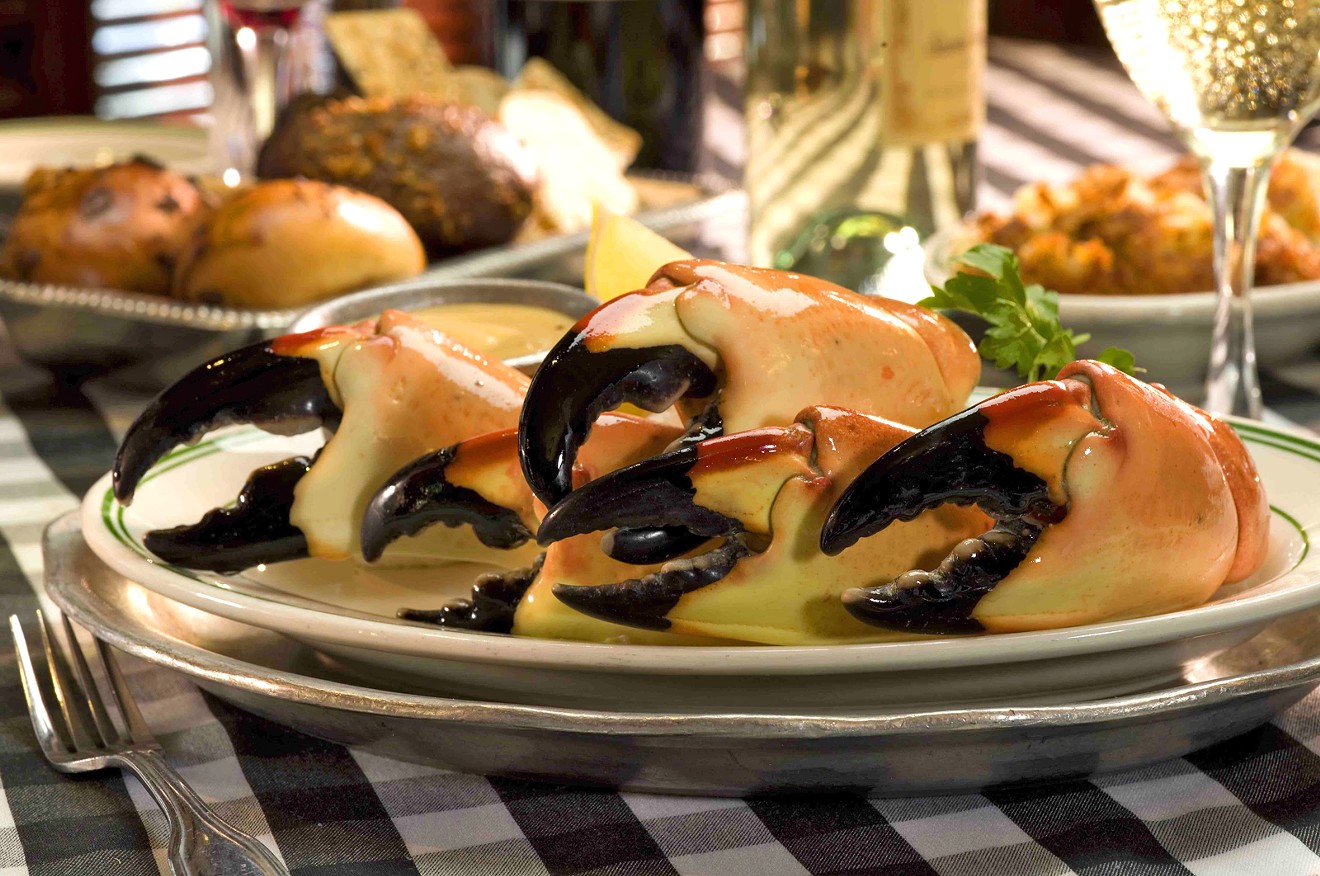 Joe's Stone Crab is renowned for its... well, you know. Joe's Stone Crab photo
South Beach is more than a day at the seashore. The southern tip of Miami Beach boasts museums, shops, and classic Art Deco architecture.

Here you'll find restaurants that serve fresh local seafood, offer the finest cuts of meat, and employ chefs who've won international accolades. And those are just a handful of the culinary bona fides of the top ten restaurants in South Beach. 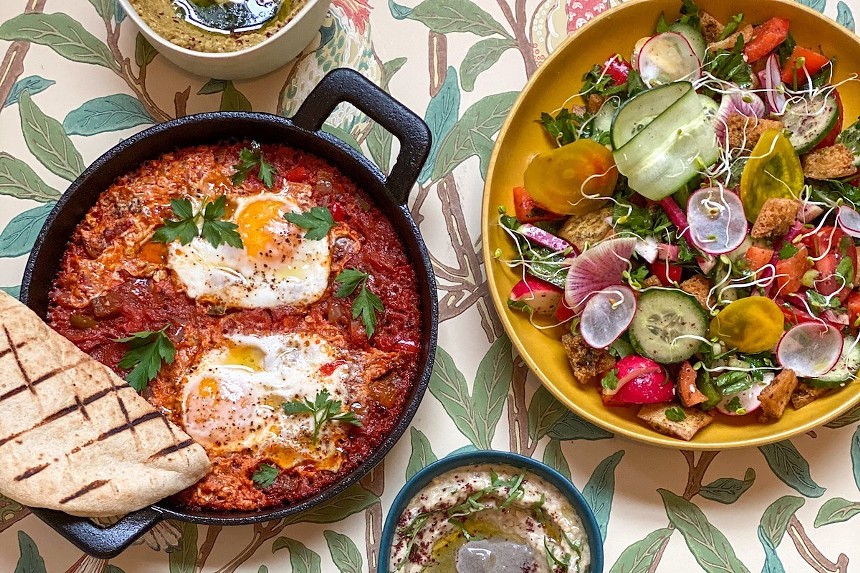 864 Commerce St., Miami Beach
305-902-3477
abbatlvkitchen.com
This intimate eatery could be mistaken for a charming villa surrounded by flowering magenta bougainvillea, but it's actually a soulful place to enjoy a menu of Mediterranean and Israeli comfort food. A collaboration between chef Samuel Gorenstein and Omer Horev, founder of Pura Vida Miami, Abbalé (derived from the Hebrew word for "father") serves the food that the two restaurateurs (and dads) serve to their families at home. Start with the "Holy Grail" of tahini, grated tomato, and green harissa served with fire-baked pita before digging into shakshuka, a baked Mediterranean egg dish, or a roasted local fish. Abbalé Mediterranean dishes are perfect for Miami's climate and are served in a beautiful setting. 161 Ocean Dr., Miami Beach
786-276-0520
azabuglobal.com
Long before every other Miami restaurant was a New York transplant, Tribeca-based Azabu opened an outpost at the Stanton Hotel in Miami Beach. The sleek restaurant, with origins in the Azabu District of Tokyo, offers three areas: a lounge offering more than 40 different whiskies, the main dining room, and a hidden room called "the Den." The main room offers sushi and izakaya items from Azabu's robata grill, while the Den serves an incomparable omakase experience for fewer than a dozen diners per seating. The Den's pristine seafood, flown in from Japan, earned it a Michelin star.
click to enlarge 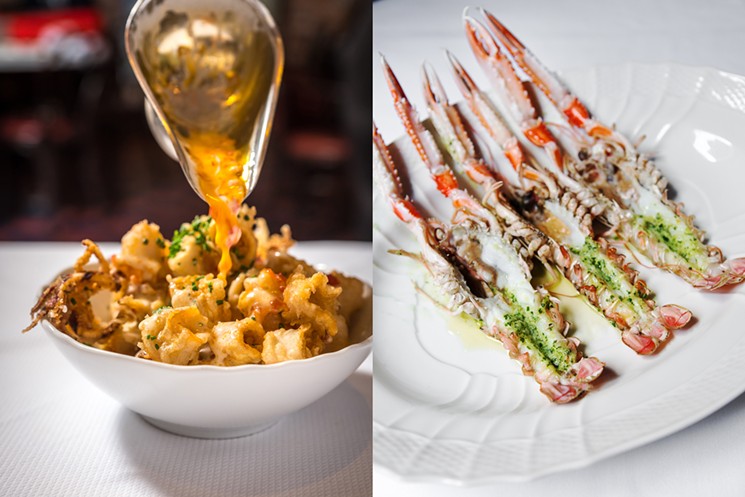 Calamari and shrimp scampi at Carbone
Photos courtesy of Carbone

49 Collins Ave., Miami Beach
carbonemiami.com
Don't dare try to walk into Carbone without a reservation. The New York transplant is trending, with reservations booked up a month in advance. The wait is worth it to experience the Old World charm that Mario Carbone and his partners, Jeff Zalaznick and Rich Torrisi, have created. The restaurant is a tribute to classic New York City red-sauce joints — with a modern (and pricey) update. Chef Carbone offers a menu chock-full of classic dishes like veal parmigiana, minestrone, and baked clams. You might have seen Carbone's spicy rigatoni vodka on your Instagram feed. Served on a hand-painted plate from Umbria, it's worth ordering for the photo — but take the time to actually eat the dish, which is creamy, spicy, and ultimately worth the monthlong wait. 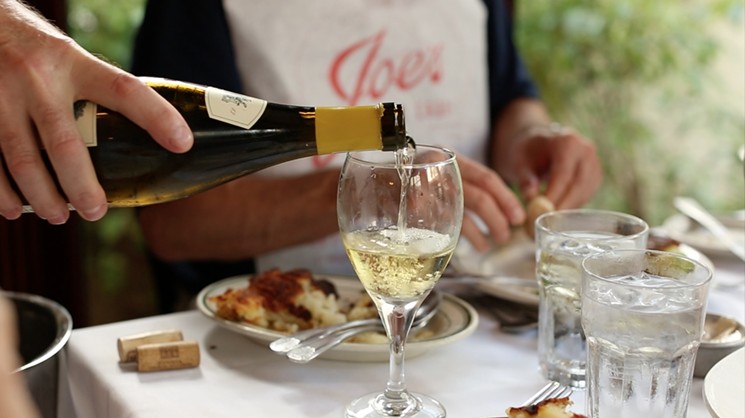 11 Washington Ave., Miami Beach
305-673-0365
joesstonecrab.com
For more than a century, crowds have flocked to Joe's Stone Crab for fresh seafood. Founded in 1913, the restaurant is older than the city of Miami Beach, which was incorporated two years later. Over the years, Joe's has become a multimillion-dollar business; it was named the second-highest-grossing independently owned restaurant in the United States by Restaurant Business. Though Joe's boasts a wide selection of fresh seafood and steaks and employs full-time fish and meat butchers to cut perfect pieces of flesh, it's the stone crabs that lure customers from around the globe. The claws, served with the restaurant's signature mustard sauce, are the reason multiple generations have celebrated birthdays, anniversaries, engagements, and just a Thursday evening at Joe's. 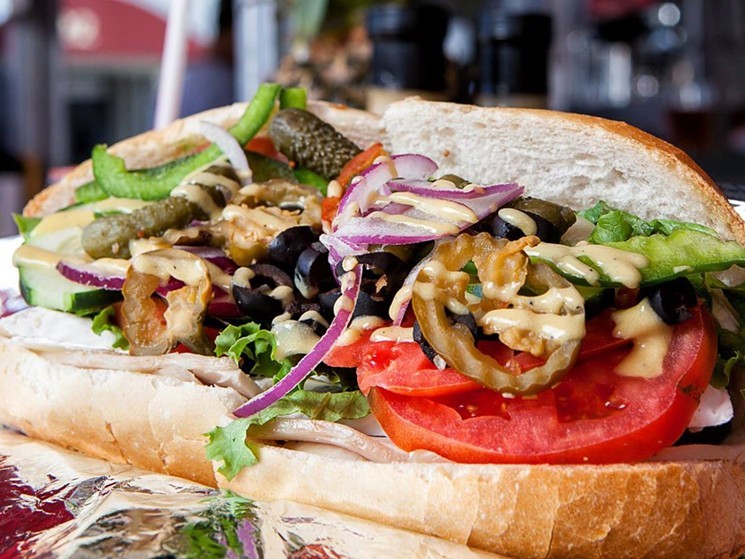 229 14th St., Miami Beach
305-532-8934
lasandwicherie.com
This French-owned counter restaurant located in an alley off 14th Street may not look like much, but it offers some of the best sandwiches in South Florida. Crispy, flaky French bread is the basis for the sandwich. From there, the sandwich makers add your choice of meat, cheese, or a combination thereof, such as ham, turkey, roast beef, salami, and Swiss cheese, as well as more distinctive, Euro-friendly choices such as Camembert, fresh mozzarella, prosciutto, saucisson sec, and pork/duck liver pâté. Next come crisp toppings such as lettuce, tomatoes, green peppers, hot pickled red peppers, black olives, red onion, cucumber, and cornichons. Garnishes are followed by a finishing splash of tart Dijon-based French vinaigrette. Voilà! A damn good sandwich. La Sandwicherie has expanded to additional locations, but the South Beach shop is the original. 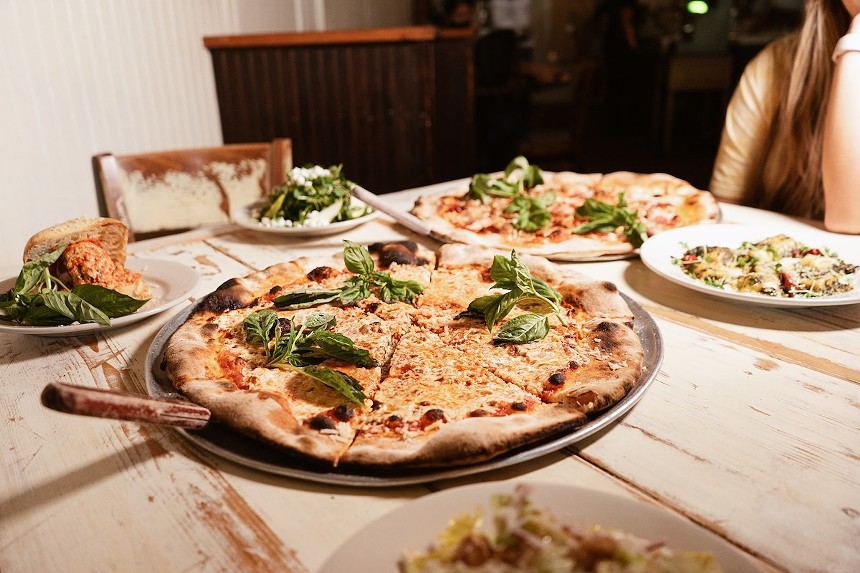 1930 Bay Rd., Miami Beach
305-695-4441
lucali.com
At first sight, Lucali, the Miami outpost of Mark Iacono’s famed Brooklyn flagship, looks like a regular pizza joint. Furnishings are unassuming — mismatched tables and chairs, an open kitchen, a working bench manned by T-shirted pizzaiolos — but by candlelight, everything glows. Men in white shine with sweat as they use empty wine bottles to roll dough. Pizza makers take their time prepping pies for the wood-burning oven. Crusts eventually emerge thin and blistered, their surfaces puffed by blackened bubbles of golden dough. Melted buffalo mozzarella and shredded Parmigiano-Reggiano cocoon smooth tomato sauce (a secret recipe that can be ordered as a side dish). Such attention to detail — and the resulting pies — earned Lucali a Michelin Bib Gourmand designation in 2022. 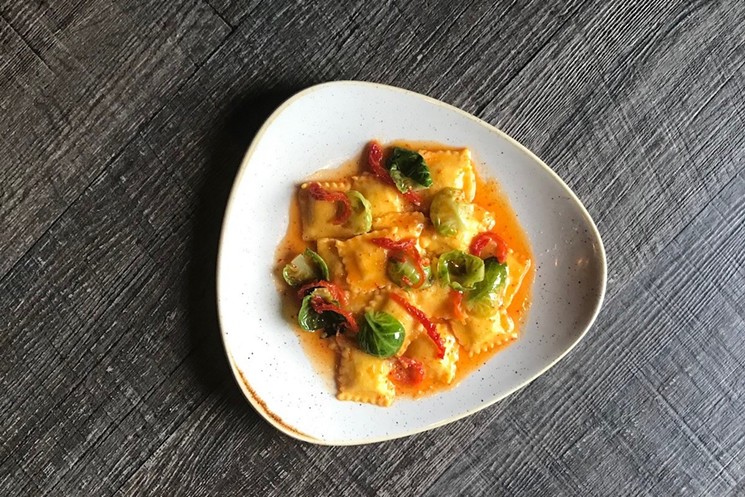 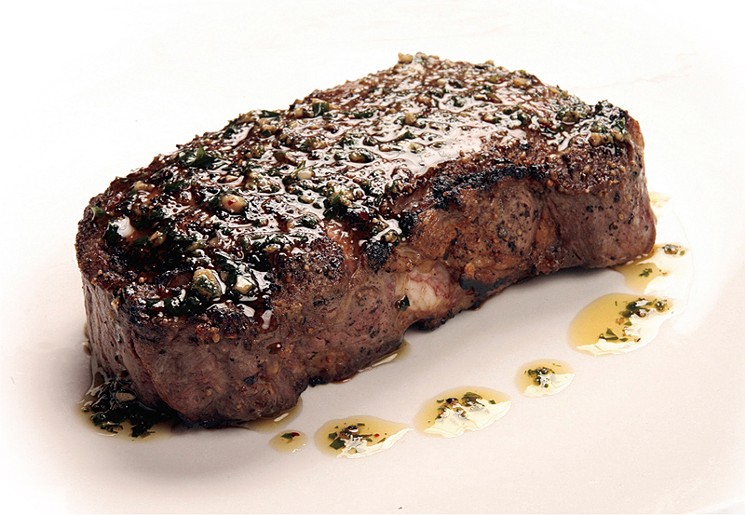 Dig into a steak at Red the Steakhouse.
Courtesy photo 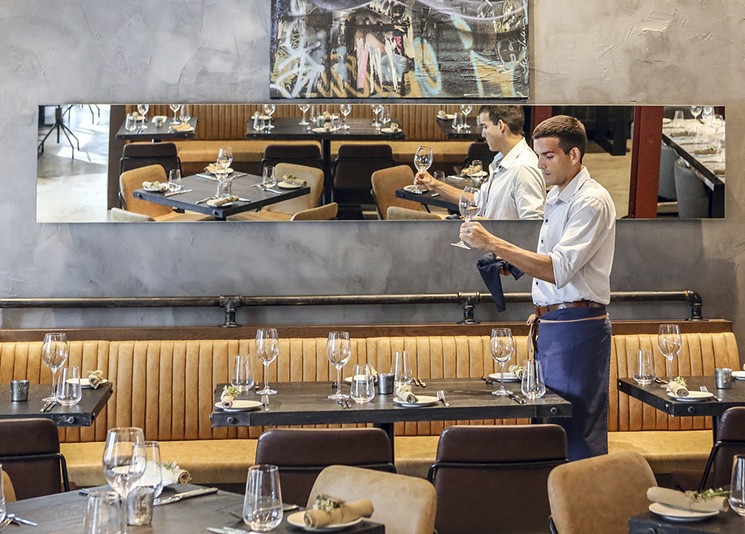 The dining room at Stubborn Seed
Photo by CandaceWest.com

101 Washington Ave., Miami Beach
786-322-5211
stubbornseed.com
Top Chef winner Jeremy Ford has worked with venerable chefs such as Jean-Georges Vongerichten and Los Angeles' Ludo Lefebvre. Now, in Miami Beach's tony South of Fifth neighborhood, Ford shines solo at Stubborn Seed. The interior design of his 70-seater is industrial chic, allowing the food to be the focal point. The best way to experience Stubborn Seed is by experiencing chef Ford's eight-course tasting menu, available until 9 p.m. nightly. The care that Ford puts into his menu has earned Stubborn Seed a Michelin Star in its first Florida Guide. 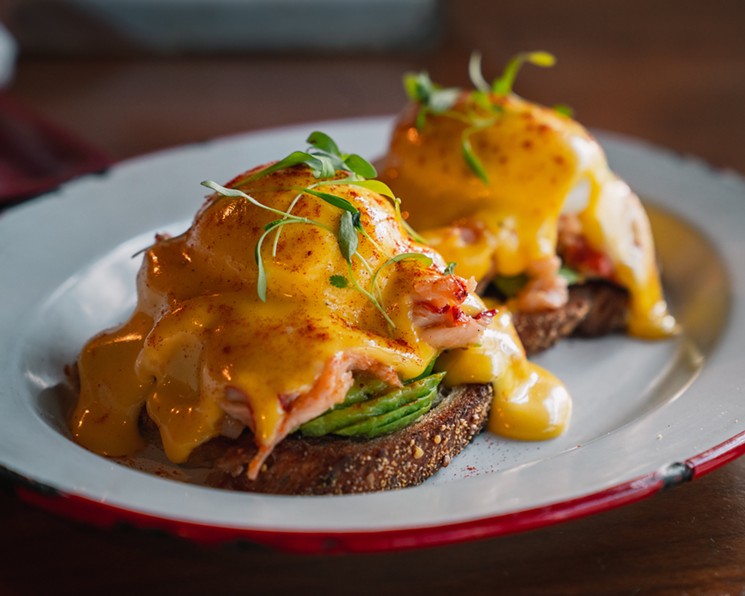 237 20th St., Miami Beach
305-763-8217
mysweetliberty.com
In 2016, restaurateur David Martinez, Blackbird Ordinary's Dan Binkiewicz, and world-class bartender John Lermayer opened a Miami Beach bar meant to be a hangout where locals could gather for proper cocktails and a killer menu by chef Michelle Bernstein. This neighborhood joint — adorned with a pink neon sign that urges patrons to "pursue happiness" — quickly became one of the most revered bars on the planet. Sweet Liberty has been named one of the World's 50 Best Bars and has won several Tales of the Cocktail Spirited Awards. Even Lermayer's untimely death couldn't stop the plucky bar and restaurant from staying true to its mission to serve good drinks and good food in a lively and friendly atmosphere. After all, it's a rare place that combines a James Beard-winning chef's food and some of the best drinks in a convivial setting that's unpretentious and downright fun.
KEEP MIAMI NEW TIMES FREE... Since we started Miami New Times, it has been defined as the free, independent voice of Miami, and we'd like to keep it that way. With local media under siege, it's more important than ever for us to rally support behind funding our local journalism. You can help by participating in our "I Support" program, allowing us to keep offering readers access to our incisive coverage of local news, food and culture with no paywalls.
Make a one-time donation today for as little as $1.