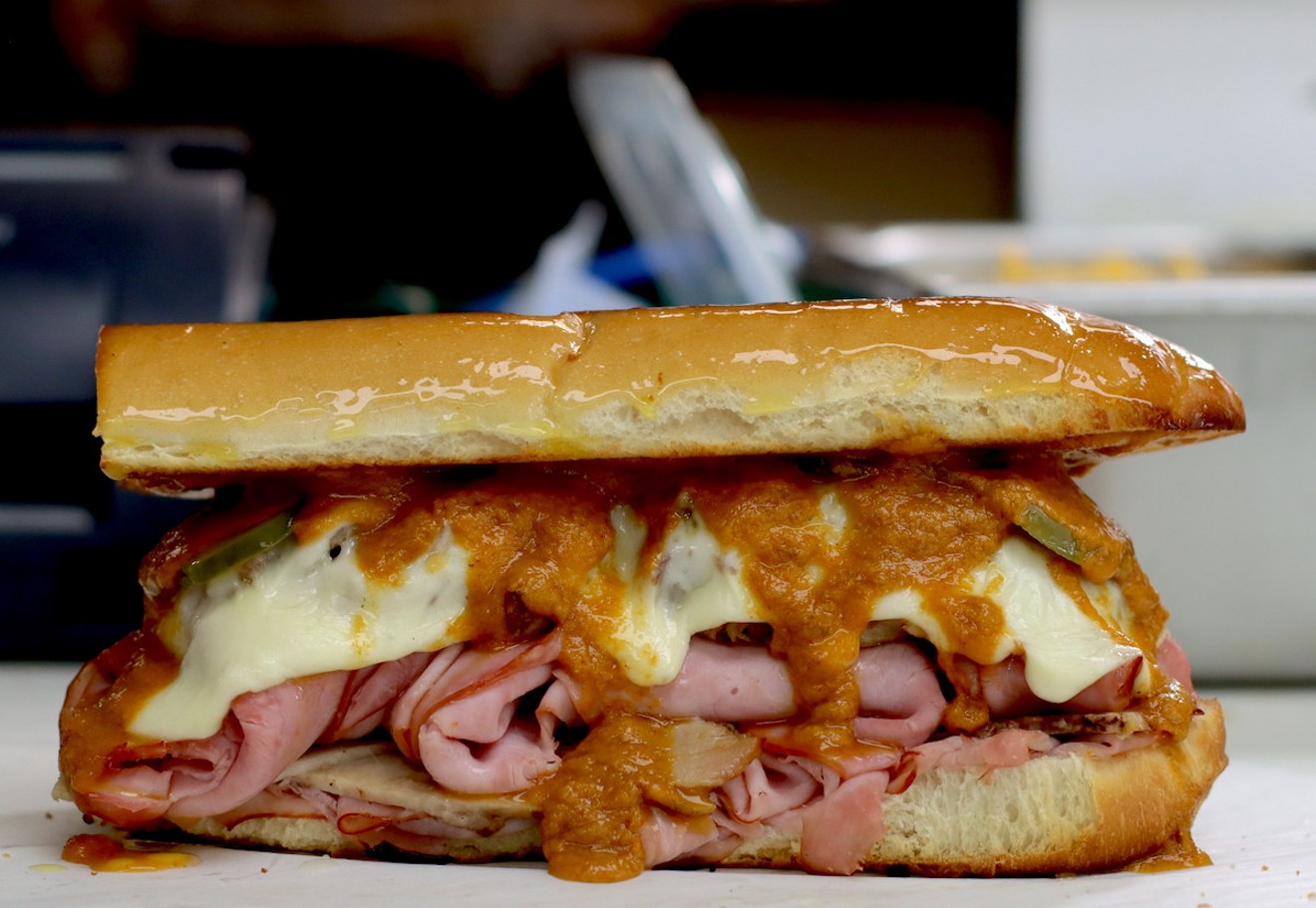 Sarussi Subs' "Man vs. Food Original" is the ultimate Miami sandwich. Photo by Nicole Danna
From our days of school lunch to our at-home office breaks, the sandwich remains the go-to meal that transcends culture, from Cuba’s medianoche to Vietnam’s bánh mì.

At its core, a sandwich consists of two slices of bread and a filling in between. But while it seems simple, the sheer number of possibilities is truly endless.

Taking the world’s favorite handheld snack from good to great involves the perfect balance of flavors and textures — and the right bread to make the ingredients shine. Sure, a homemade PB&J sometimes hits the spot, but try a stacked-bread behemoth from any one of these spots pushing the envelope of sandwich construction and your life will be forever changed.

The restaurants below (listed in alphabetical order) know the formula and display their own flair, complexity, and versatility while retaining the fundamentals of a sandwich. 4427 NW 36th St., Miami Springs
305-883-7806
airportcafeandliquors.com
At Airport Cafe & Liquors, former Food Network Star contestant Reuben Ruiz promotes the daily and weekly specials via his personal Instagram account with videos and photos of his newest massive creation, inspiring instant hunger. Some creations have become so popular, they've made it onto the café's regular menu — from the croqueta ham-and-cheese sandwich to the avocado, shrimp, and pesto crunch wrap, the cheddar Buffalo fried-chicken sammie with garlic Parmesan bacon, and the chorizo Philly cheesesteak. 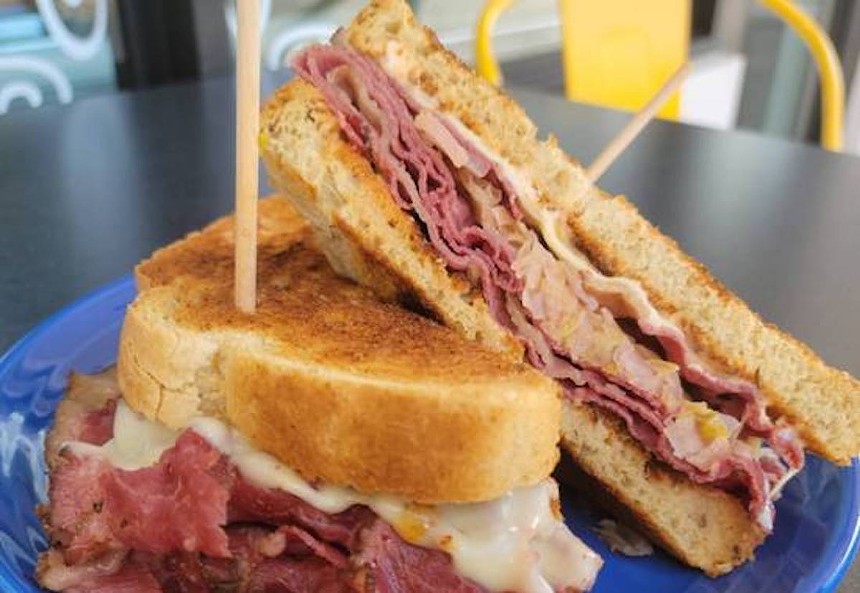 9216 SW 156th St., Miami
786-429-1315
babefroman.com
What began as a side hustle at farmers' markets became a full-fledged business for Melanie and Jason Schoendorfer in 2018 when the duo opened Babe's Meat & Counter in Palmetto Bay, expanding the menu with a curated selection of high-end specialty meats. Today, a butcher counter doubles as a breakfast and lunch spot that offers charcuterie, sausages, and sandwiches built around premium cuts. Babe's is one of the only places in Miami that offers Montreal smoked meat, the Canadian take on Jewish deli pastrami, here served on rye bread with mustard. Also worth the trip: the Cuban with house-roasted pork, and the báhn mì, made with your choice of house-smoked pork or duck bacon. 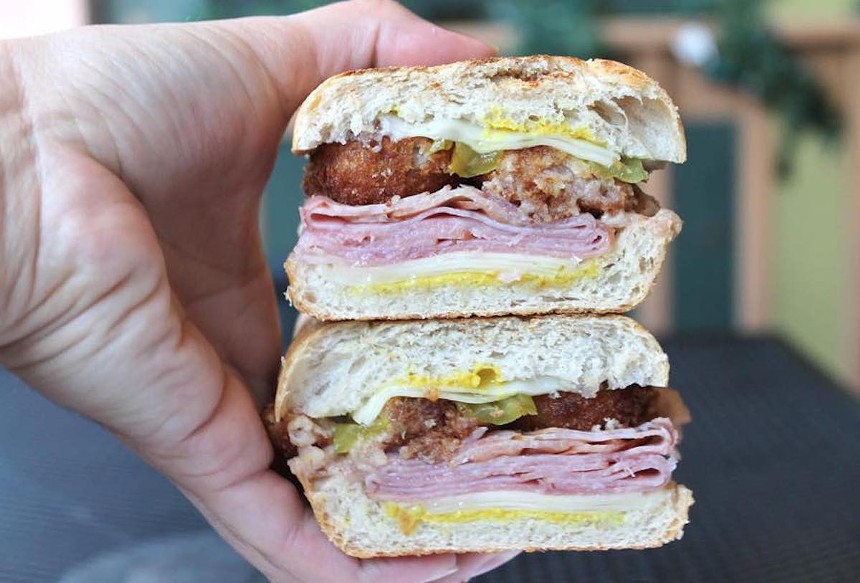 186 NE 29th St., Miami
305-573-4681
enriquetas.com
You've probably already tried the pan con bistec at Enriqueta's, the jam-packed Cuban lunch counter/cafeteria that caters to families, workers, and hipsters on the corner of NE 29th Street and Second Avenue in Wynwood. It's a hearty sandwich, crammed with thin slivers of steak, tomato, onion, cheese, and potato sticks. Some say it's the best pan con bistec in Miami, but you'd be missing out if you didn't try the Cuban sandwich stuffed with croquetas, which takes the standard Cuban — ham, roast pork, melted Swiss cheese, pickles, and mustard between two pieces of bread — and adds a welcome twist of crispy, cheesy croquetas. 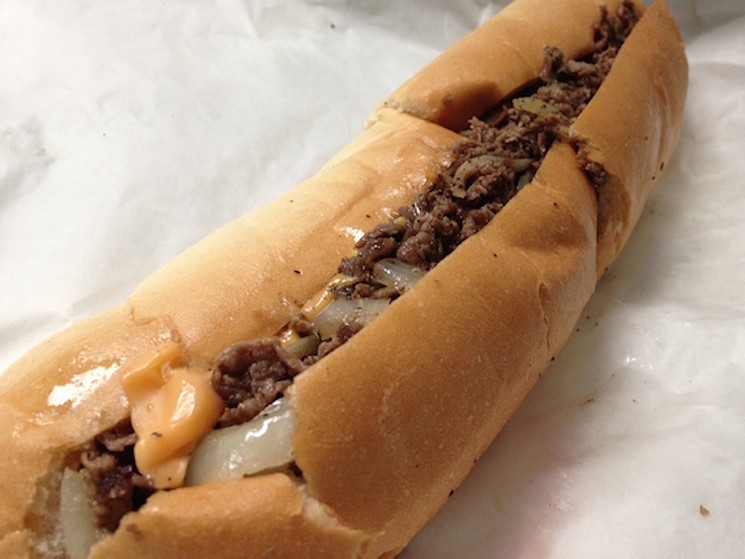 Cheesteak and onions at Hungry Bear
Courtesy of Burger Beast

10521 SW 109th Ct., Miami
305-595-8385
Have you ever been hungry enough to feel as though you could eat like a large carnivorous mammal? If so, head over to Hungry Bear, a hole-in-the-wall sandwich shop hidden in a strip mall across from Miami Dade College's Kendall campus. This longtime favorite serves a variety of hot, tasty, mammoth-size subs that are guaranteed to tame a beast of an appetite. The hamburger subs are pretty cool, but you'll do yourself a disservice if you don't try standouts like the honey-mustard chicken, crammed with a mountain of meat and veggies and drenched in the shop's own sticky-sweet sauce, or the "steak bomb," packed with Philly-style steak, grilled onions, mushrooms, and green peppers, and topped with steak sauce and a choice of Swiss, American, or provolone cheese. (There's a second location at 3399 NW 72nd Ave., Miami.) 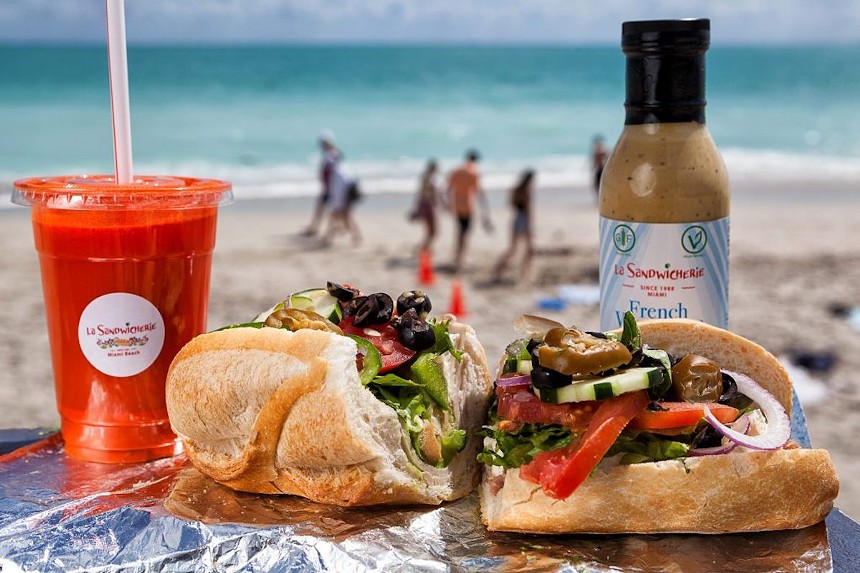 Various locations
lasandwicherie.com
Serving sandwiches in Miami Beach since 1988, La Sandwicherie — now five locations strong — delivers some of the best eats served between two slices of bread that you'll find in these parts. A combination of fresh ingredients, crisp baguettes, and soft croissants, coupled with the French-themed eatery's own Dijon vinaigrette, make for an unforgettable trip into sandwich heaven. You'll find locations in Brickell, Wynwood, North Beach, and Coral Gables, but don't miss the original in South Beach, which offers the most old-school vibe. Here, the myriad sandwich combinations include offbeat ingredients like tuna mix (a French-style tuna salad with olive, artichoke hearts, and hard-boiled eggs), pâté, and prosciutto. Or spring for the signature Frenchie: a simple and satisfying melding of fresh-sliced French salami and Brie. Don't forget to take home a bottle of that dressing while you're there. 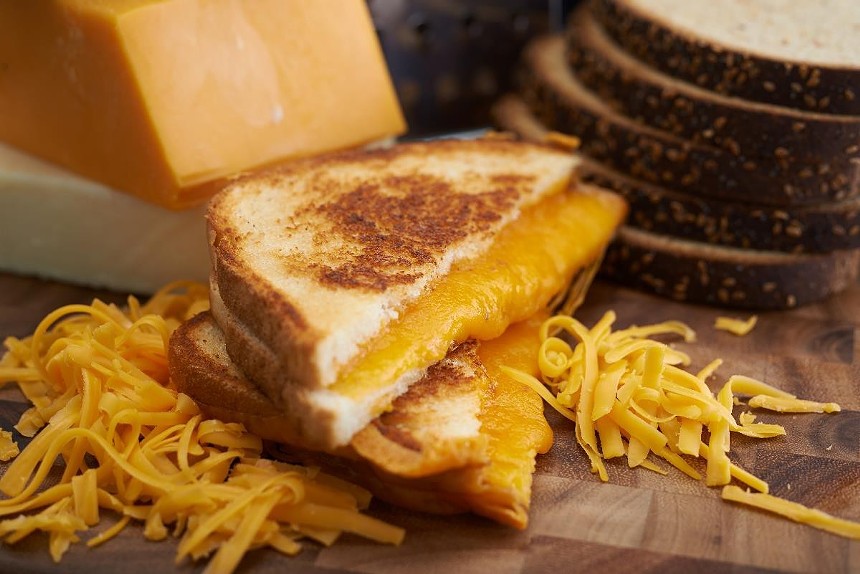 7418 Biscayne Blvd., Miami
305-989-4019
mscheezious.com
When the siren song of grilled cheese calls, head to Ms. Cheezious. This Biscayne Boulevard hotspot takes on childhood favorites such as mac and cheese, s’mores, Frito pie, and grilled cheese in myriad variations, but once you feast your eyes and stuff yourself with the "Croqueta Monsieur," you’ll likely look no further, as Miami’s quintessential finger food and France’s beloved snack join forces to create an edible thing of beauty. It packs three ham croquetas, shaved tavern ham, Swiss cheese, béchamel sauce, and a few handfuls of gouda on sourdough bread that's grilled to perfection. 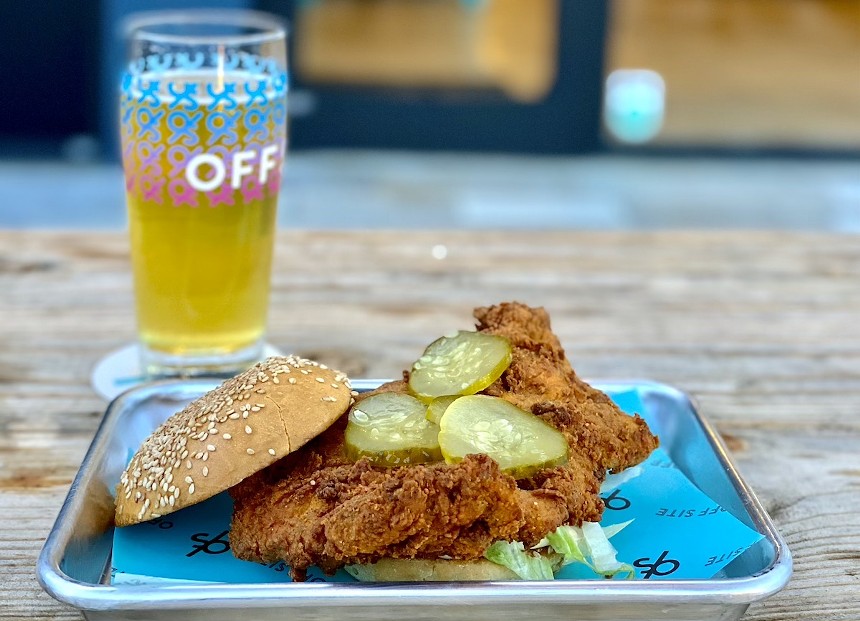 The fried chicken sandwich from Off Site
Photo by Nicole Danna

8250 NE Second Ave., Miami
786-360-4237 offsite.miami
Miami restaurateurs Adam Darnell (Boxelder) and Steve Santana (Taquiza) launched Off Site to pair their passions and create the perfect sandwich shop, restaurant, and nano brewery. Today, the spot is best known for its perfectly fried chicken thighs wedged between two slices of bread. Topped with lettuce, garlic mayo, and housemade pickles, it pairs perfectly with the house Super Good lager. Of course, so do the other half dozen or so sandwiches on the menu, whose draw lies in their precise curation. Like the Benton's bacon that goes into the country Cuban and club sandwiches, or the Laubscher Swiss cheese that marries perfectly with the house-corned prime brisket but also makes the most sublime grilled cheese when paired with buttered and griddled milk bread. 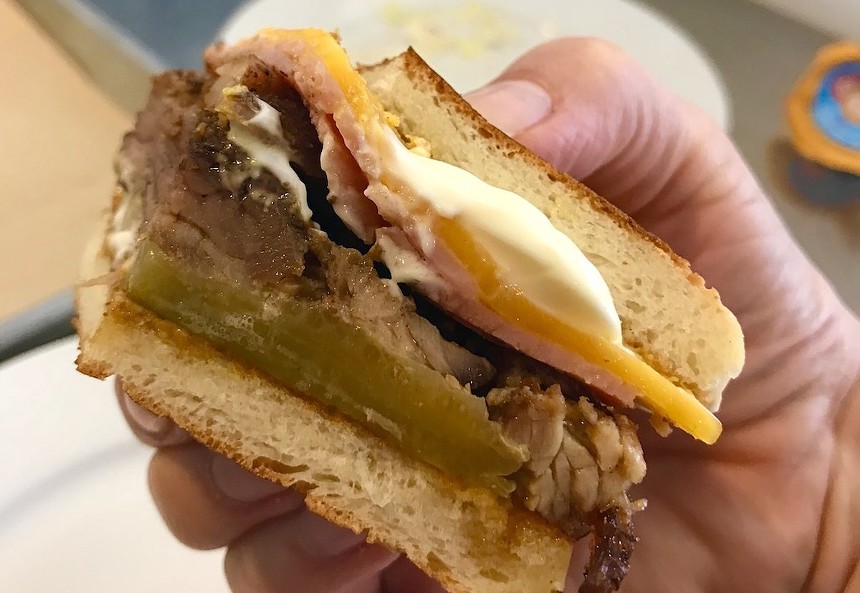 The Cubanish from Proper Sausage
Photo by Alona Abbady Martinez

9722 NE Second Ave., Miami Shores
786-334-5734
propersausages.com
Freddy and Danielle Kaufmann's quaint Miami Shores butcher shop, Proper Sausages, has been the go-to spot for artisanal sausages and responsibly sourced meat since it opened in 2013. The shop also offers an exceptional grab-and-go sandwich menu made with the same antibiotic- and hormone-free, grass-fed, organic meats and poultry it sells. About a dozen sandwiches are on offer, along with a daily special and burger of the week, all listed on a chalkboard menu. Served on Portuguese muffins, they include the sausage, egg, and cheese, as well as a pulled pork made with dry-rubbed and roasted pork shoulder and slaw. The “Cubanish" and “Reubenish” take both traditional sandwiches up several notches with roasted Berkshire pork shoulder, Wagyu corned beef, homemade pickles and sauerkraut. 2057 SW Eighth St., Miami
305-539-0969
sanguich.com
Sanguich co-owners Daniel Figueredo and Rosa Romer offer up a tantalizing menu of classic Miami sanguiches (sandwiches) that pair perfectly with their house batidos (milkshakes). Highlights include medianoches, pan con bistec, Elena Ruz (Cuban turkey sandwich), and — of course — that classic Cuban. You'll find these have the same flavor profile as the classic you'll find at any good Cuban spot — but with perceivable enhancements that any Cubano connoisseur will notice. The bread is a little richer, denser, and chewier. The ham is sweeter. And the pork is more savory, fattier, and offers a richness that others lack. 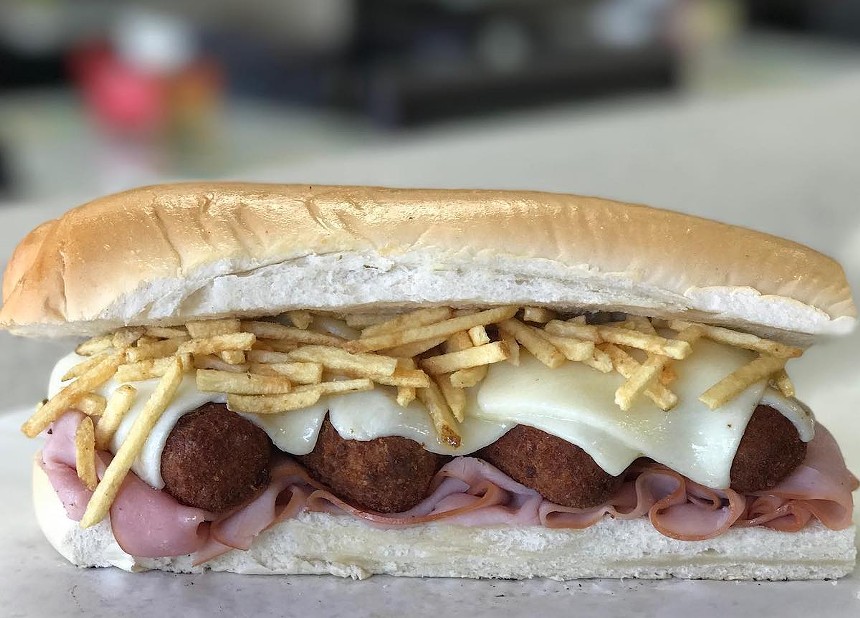 Sarussi Cafe is best known for its Cuban sandwich that was featured on Man vs. Food.
Photo courtesy of Sarussi Cafe

6797 SW Eighth St., Miami
305-264-5464
sarussisubs.com
You'll be having the "Man vs. Food Original" when you head into Sarussi Subs. That’s the must-order item at this Calle Ocho hotspot, which has been serving its take on Cuban sandwiches for more than 50 years. It's the version featured on Adam Richman’s Man v. Food in 2010, and it packs double servings of baked ham, roasted pork, mozzarella cheese, pickles, and a heaping portion of Sarussi's secret spicy sauce. Other fillings include churrasco, pierna de cerdo, chorizo, tuna, and mushrooms, all crammed into a loaf of homemade Cuban bread brushed with a touch of butter and garlic. If you can manage to wolf down the nearly foot-and-a-half-long size on the spot, your photo will get a spot on the restaurant's wall of fame.
KEEP MIAMI NEW TIMES FREE... Since we started Miami New Times, it has been defined as the free, independent voice of Miami, and we'd like to keep it that way. With local media under siege, it's more important than ever for us to rally support behind funding our local journalism. You can help by participating in our "I Support" program, allowing us to keep offering readers access to our incisive coverage of local news, food and culture with no paywalls.
Make a one-time donation today for as little as $1.