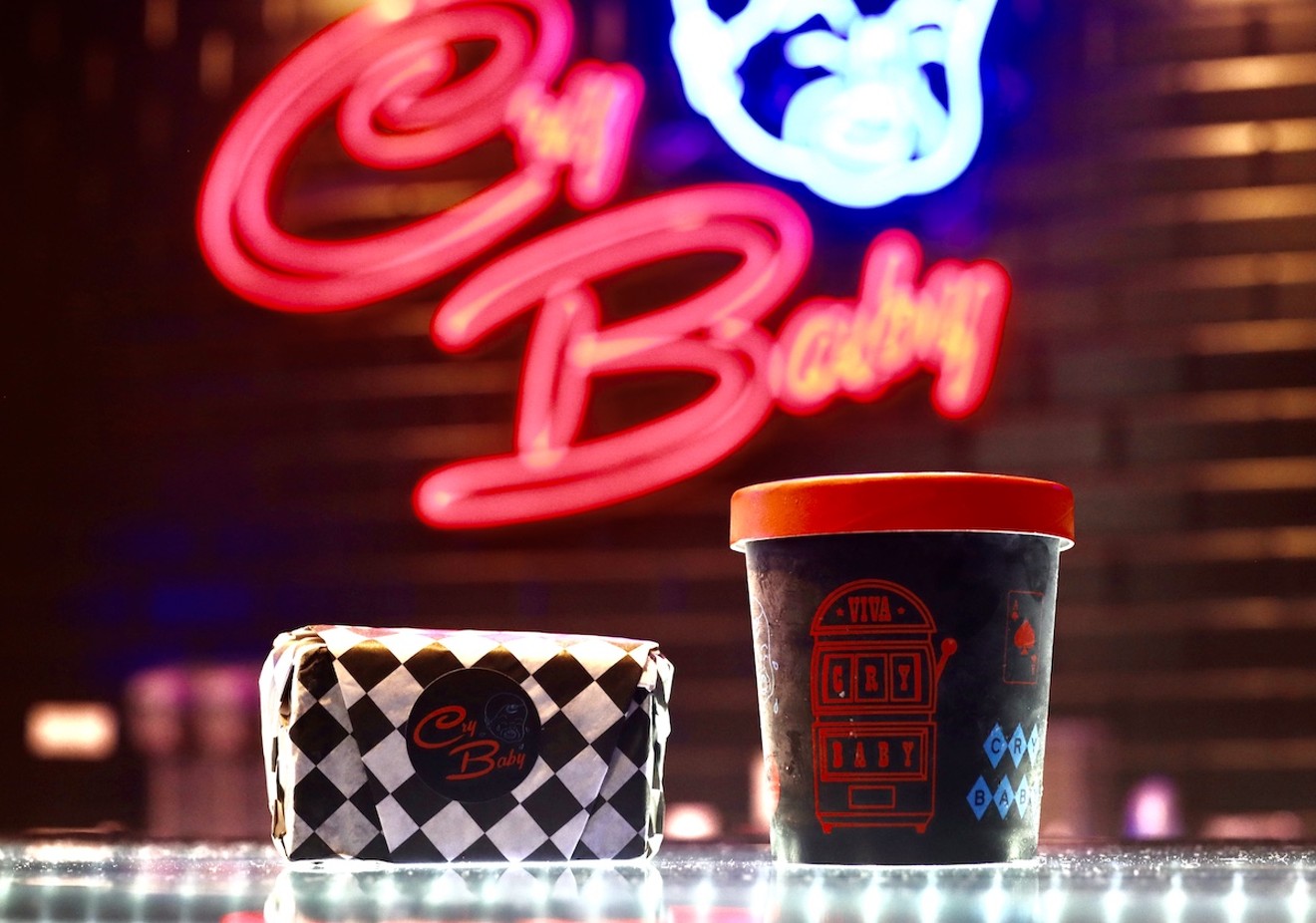 Cry Baby Creamery in Palmetto Bay Photo by Nicole Danna
In South Florida, we know heat — and we know how to beat it. Between air-conditioning, swimming pools, a dip in the ocean, and a plethora of ice cream and serve-yourself froyo shops, we've got summer meltdowns covered.

As temperatures soar across the Magic City, one can't help but crave a scoop of ice cream. It's at this time of year more than ever that your neighborhood ice cream parlor becomes a sanctuary.

From crazy flavors and adults-only scoops to design-your-own ice cream cookie sandwiches and sundaes sprinkled with everything but the kitchen sink, here's an alphabetical list of the top ten shops where you can procure summer's most essential treat. 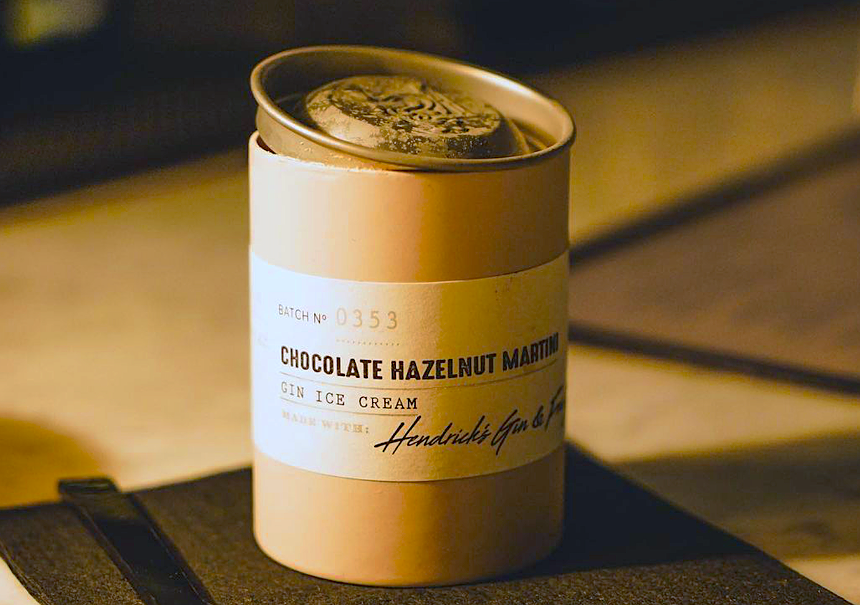 172 NE 41st St., Miami
305-946-9072
aubiramsa.com
A wall of bottles glows behind a wooden bar at Aubi & Ramsa. But this is no ordinary watering hole. Here, in the heart of Miami's Design District, you'll find your spirit choice in the form of an icy scoop rather than a liquid pour. The shop, open to patrons age 21 and older, offers frozen treats fused with various spirits, from tequila and rosé to vodka, gin, and red wine. Try the mojito-inspired sorbet spiked with Zacapa 23, a key lime pie martini scoop with St. George Botanivore gin and flecks of graham cracker, or a serving of Moët & Chandon Imperial Brut in a mimosa-like take on tangerine sorbet. 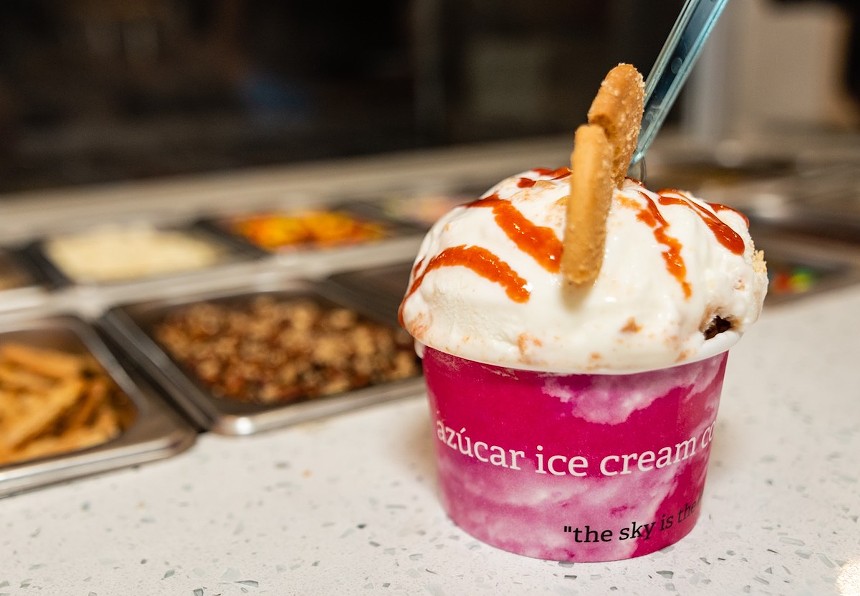 1503 SW Eighth St., Miami
305-381-0369
azucaricecream.com
When you're strolling along Calle Ocho in the afternoon, nothing satisfies like a scoop of something cold. So pop into Azucar Ice Cream Company, where you'll find flavors that could be dreamed up only in Miami. Located in the heart of Little Havana, this shop has long served frozen sweets with Cuban flair. Instead of downing scoops of French vanilla and bubblegum, you'll savor flavors such as café con leche, plátano maduro (sweet plantain), guarapiña (sugarcane and pineapple), and the "Abuela María" (vanilla ice cream with ripe guava, chunks of cream cheese, and crushed Maria cookies). 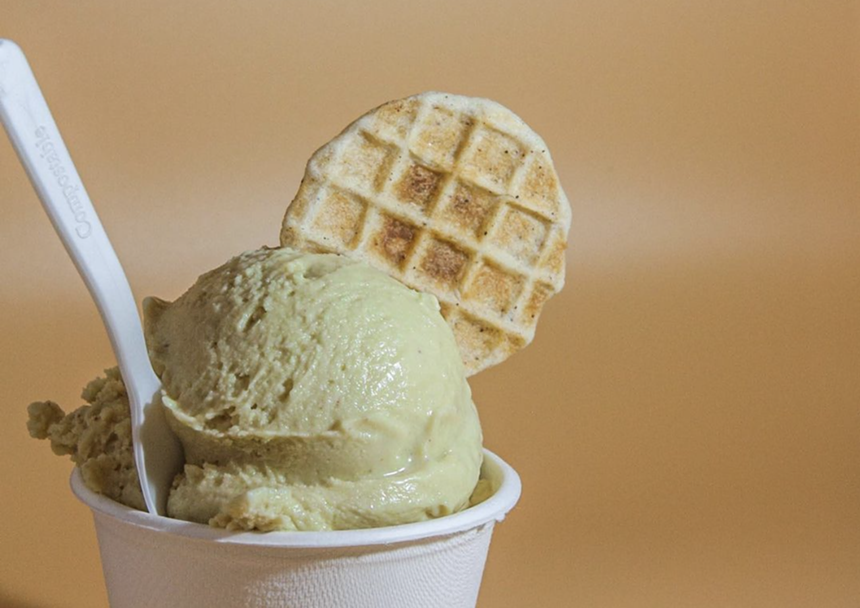 Bianco Gelato's pistachio gelato is made with Sicilian pistachios.
Photo by Hector Perdomo

9700 Collins Ave., Bal Harbour
305-397-8243
instagram.com/biancogelato
Owned by husband-and-wife team Federico and Carla DiFranco, Bianco Gelato has grown into a successful chain of shops peddling gelato, the Italian take on ice cream that offers a maximum 10 percent fat content compared with the 30 percent or more in its more common dairy cousin. DiFranco, who hails from Milan, knows a thing or two about gelato: His family has been making the Italian version of America's favorite treat for years. At Bianco, the duo offers dozens of flavors that use all-natural and organic ingredients — from local fruits and pistachios from Sicily to hazelnuts from Alba and almonds from the Mediterranean. Try the pink salt caramel peanut butter, the Belgian chocolate, and the "Coconut Grove" (a triple-coconut experience made with fresh coconut). 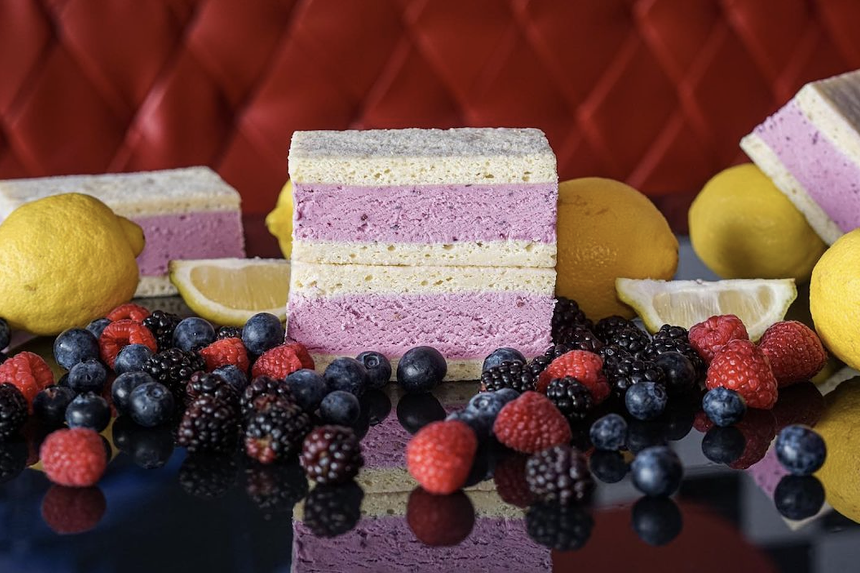 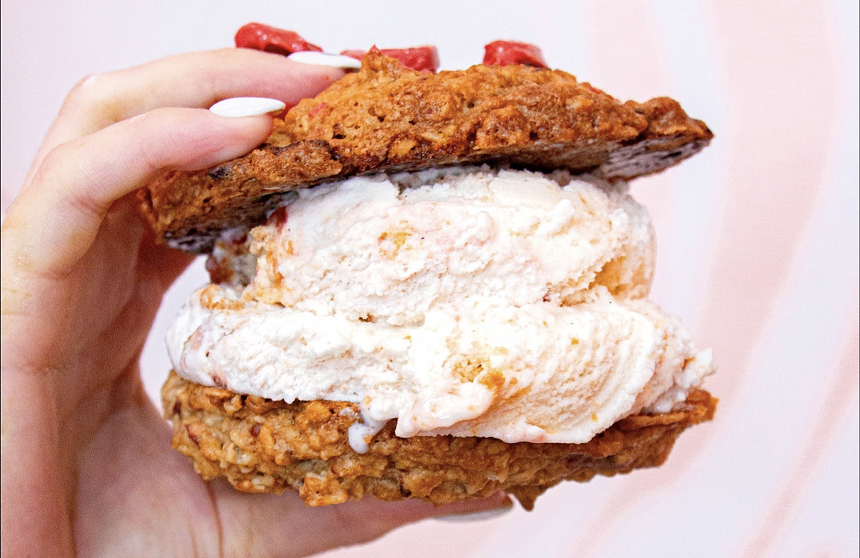 2211 NW Second Ave., Miami
305-213-1569
dasherandcrank.com
Dasher & Crank is a chef-driven craft ice cream shop that revolves around a rotating lineup of flavors, most of them unique concoctions you won't find anywhere else. Making everything in small batches means the menu is always changing — their first year of business saw more than 420 flavors — with new flavors debuting each week. These days, the most popular is a vegan offering dubbed "Ube Macapono," a coconut ice cream flavored with Filipino purple yams. Whatever you choose, you can opt to get it packed into a pint, stacked on a cone, blended into a milkshake, or stuffed between cookies, brownies, or cupcakes for a create-your-own ice cream sandwich. 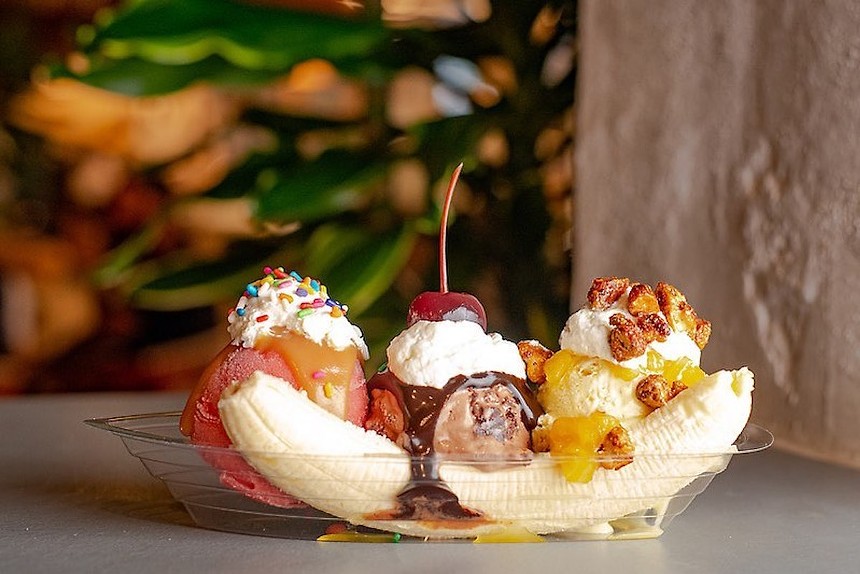 8300 NE Second Ave., Miami
305-901-0731
fricecream.miami
When chefs Jeremy and Alissa Frice moved to Miami, their dream was to open an ice cream shop that could pay homage to their combined experiences in the kitchen. Alissa spent her career focusing on the sweeter side of things, while Jeremy cultivated his savory palate. Together they create amazing ice cream. At Frice Cream, each flavor begins with a rich French custard base the couple flavors with a bounty of fresh, local ingredients. The best part: Everything is made in small batches, from the cones, sauces, and toppings featuring local fruits to the baked goods and candies used to top and flavor the ice cream. You can taste the love that goes into each offering, from the satiny-smooth caramel and rich chocolate sauces to the fresh whipped cream, candied nuts and brittles, caramelized fruits, and candies. Find Frice on the menu at dozens of Miami restaurants, or head to the Citadel in Little River, where flavors are forever changing. 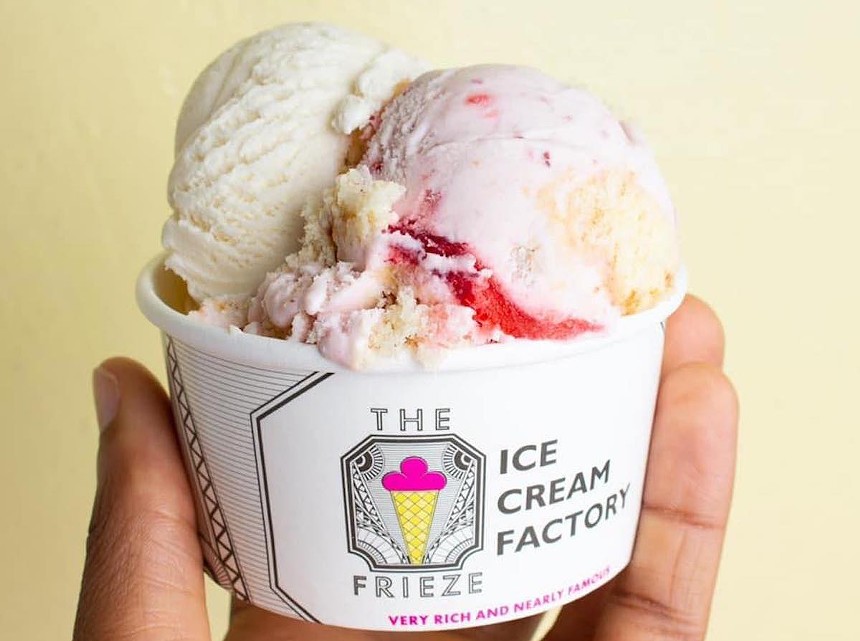 The Frieze has a long history serving scoops in Miami Beach.
Photo courtesy of The Frieze Ice Cream Factory

The Frieze has been a South Beach staple for 30 years, whipping up homemade and uniquely named flavors such as "Sassy Strawberry" and "Get Down Boogie-Oogie Cookie," not to mention rich-tasting sorbets. Speaking of which, the dozen or so sorbet flavors, made with tempting fruits like watermelon and passionfruit, are refreshing but not too watery, tart but not too tangy. If you’re feeling fancy, ask for the crowd favorite: Champagne sorbet. 151 NE 41st St., Miami
frohzen-miami.com
Located in the Miami Design District at Paradise Plaza, Frohzen offers a unique and whimsical frozen treats unlike any other. Salvatore Martone, executive pastry chef at L’Atelier de Joël Robuchon and a protégé of that restaurant's namesake, shines hefre with creations that combine aesthetics and flavor for desserts that are as beautiful as they are delicious. Options range from signature ice cream cupcakes and macaron ice cream sandwiches to cakesicles (slices of ice cream and cake on a popsicle stick), all made with house-churned ice creams, sorbets, and soft-serve. Flavors include red velvet, birthday cake, and tres leches ice cream, as well as sorbets like banana, pineapple, and lime, and soft-serve options like cream cheese or strawberry frosting. 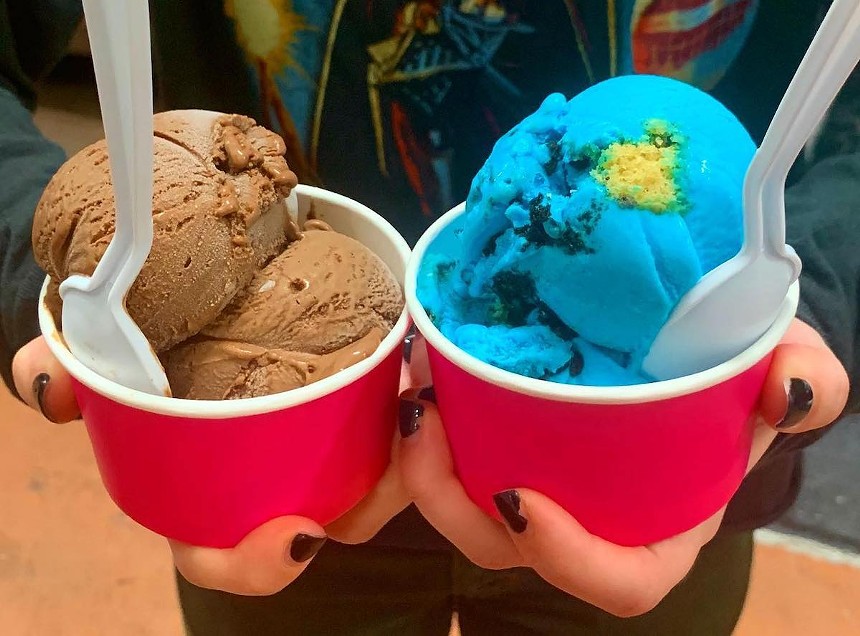 15224 Sunset Dr., Miami
786-376-2814
sweetmelodyicecream.com
Years after its debut, "Let It Brie" remains one of Sweet Melody's singular treats: an ice cream made with baked brie mixed with a touch of salt, loads of apricot jam, and toasted almonds. But it's just one of the many creamy creations concocted by chef/owner Mike Romeu, who began his ice cream venture in 2016, inspired by his daughter, Melody, for whom the shop is named. What began as a home-based operation using an ice-cream maker from BrandsMart to churn out the "Sunday Morning Hangover" — a bourbon ice cream containing candied bacon, peach, and bits of biscuits — has since grown into a successful ventanita in Kendall where Romeu peddles an ever-rotating selection of more than 100 recipes. It's a unicorn being devoured by a fish! One of Taiyaki's whimsically shaped cones.
Photo courtesy of Taiyaki

143 NW 23rd St., Miami
305-768-9826
taiyakinyc.com
You've seen them all over Instagram — little fish-shaped cones with ice cream that resembles a unicorn, a Care Bear, or other such delightful, whimsical creatures. Taiyaki has taken Miami by storm with the most adorable and photogenic treats known to mankind. The fish-shaped cone is filled with red bean paste and topped with a soft-serve swirl. Top it with everything from sprinkles to candy. Special-edition cones — cute shapes that often rotate according to the holidays — include unicorns, Christmas trees, and the Easter Bunny and are available seasonally.
KEEP MIAMI NEW TIMES FREE... Since we started Miami New Times, it has been defined as the free, independent voice of Miami, and we'd like to keep it that way. With local media under siege, it's more important than ever for us to rally support behind funding our local journalism. You can help by participating in our "I Support" program, allowing us to keep offering readers access to our incisive coverage of local news, food and culture with no paywalls.
Make a one-time donation today for as little as $1.