The Ten Best Things to Do in Wynwood Wynwood party people at this month's art walk. Photo by Monica McGivern
Move over, South Beach. Miami has a new tourist destination, and it's not yet universally despised by locals.

Just five years ago, Wynwood was the kind of place you wanted to be too long after dark. Then artists began moving in, opening galleries, and putting up murals. Soon the relatively small area became a much desired locale for real-estate developer Tony Goldman, the same man who helped turn South Beach and New York City's SoHo into hoppin', shoppin' centers of cultural interest.

Wynwood Walls went up, Panther Coffee was brewed, and no one has looked back since. Has gentrification stripped the neighborhood of some of its charm? Absolutely. But there have been positive results to Wynwood's exponential growth too. How many of these cool things have you ticked off your list? 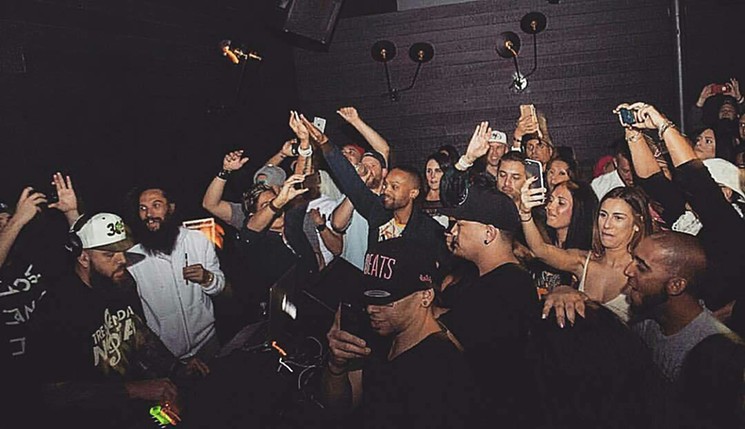 Murk Mondays is the wildest Monday of your life.
Courtesy of Lazaro Casanova
1. Stay up way past your bedtime at Coyo Taco’s Murk Mondays
Monday isn't the week's most favored late-night engagement. It's usually relegated to prime-time television and a whole lot of sitting on the couch — but that's only because you haven't met the right party. Every Monday, the backroom at Coyo Taco becomes a sweat box of music, movement, and rapture as Oscar G, Lazaro Casanova, and Ralph Falcon - three of Miami's funkiest house masters - bring their Latin-influenced vibes to the 200-capacity dance floor. Live drummers deliver the heat and take the rhythm up a serious notch, the cocktails are delicious, and there's never a cover charge.
2. Take a mural bike tour and learn the ins and outs of the street art
Wynwood isn't the little-known gem it used to be. Traffic is almost always a nightmare for anyone trying to navigate NW Second Avenue by car. If you want to see the art, the best way to go is by bike and with a tour guide who knows which artist painted what mural and maybe a bit about what the artist was trying to convey. It's a total upgrade from your random wandering selfie-spot search, and there are quite a few tour options. Try Miami's Best Graffiti Guide for groups of all sizes. 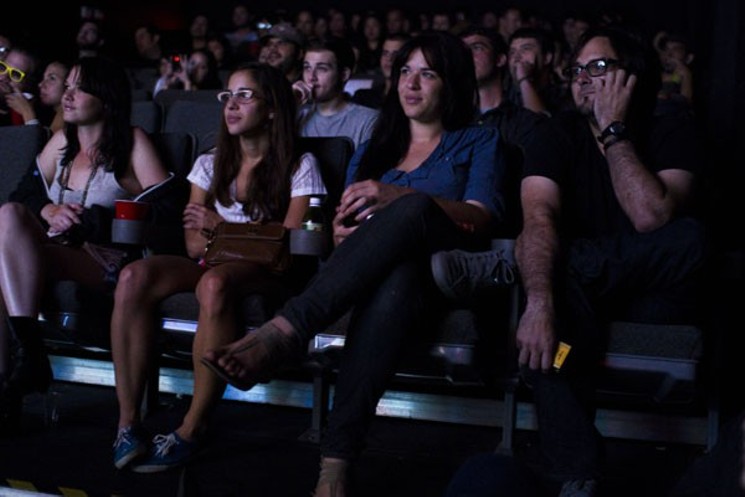 Look at this captivated audience.
Photo by Alex Broadwell
3. Catch a flick at O Cinema
Did you know Wynwood is hiding its own adorable movie theater? It's a one-screen scene, so you have to like what's on the menu. But with a range as broad as O Cinema's, there's something for everyone in the lineup: arthouse and independent films, major motion pictures, family films, and foreign flicks too. The theater hosts four showings every day — morning, noon, evening, and night.

Photo by Laine Doss
4. Run three miles for beer with Concrete Beach
Experts have been known to suggest a glass of beer after a good, hard run. Beer actually contains a lot of things your muscles crave in recovery, as long as you don't overdo it. Concrete Beach Brewery wants to help you help yourself, and once a month, it collaborates with Team Footwork on a nice, long run of anywhere from three to four miles. You can hang back with the walkers or go for your best time, and everyone who participates gets one free beverage upon return. You gon' run this town. Photo by Monica McGivern
5. Eat the best pizza in town at Gramps’ Pizza Tropical
Gramps is one of the best watering holes, not only in Wynwood but in all of Miami. If you're looking for a craft beer or well-crafted cocktail but you're not in the mood for cover charges or any pretenses, Gramps is the perfect place, with a big backyard to boot. It hosts drag bingo and comedy shows, even movie screenings in the backroom, plus tons of concert events featuring live bands and DJs in the yard. But did you know Gramps also offers some of the best sloppy, delicious giant pizza slices in all of the 305? Served fresh from a permanent food truck, Pizza Tropical is exactly what you need when you've got the drunk munchies. Buy a whole pie or a slice with sides. Yup, Gramps has it all.