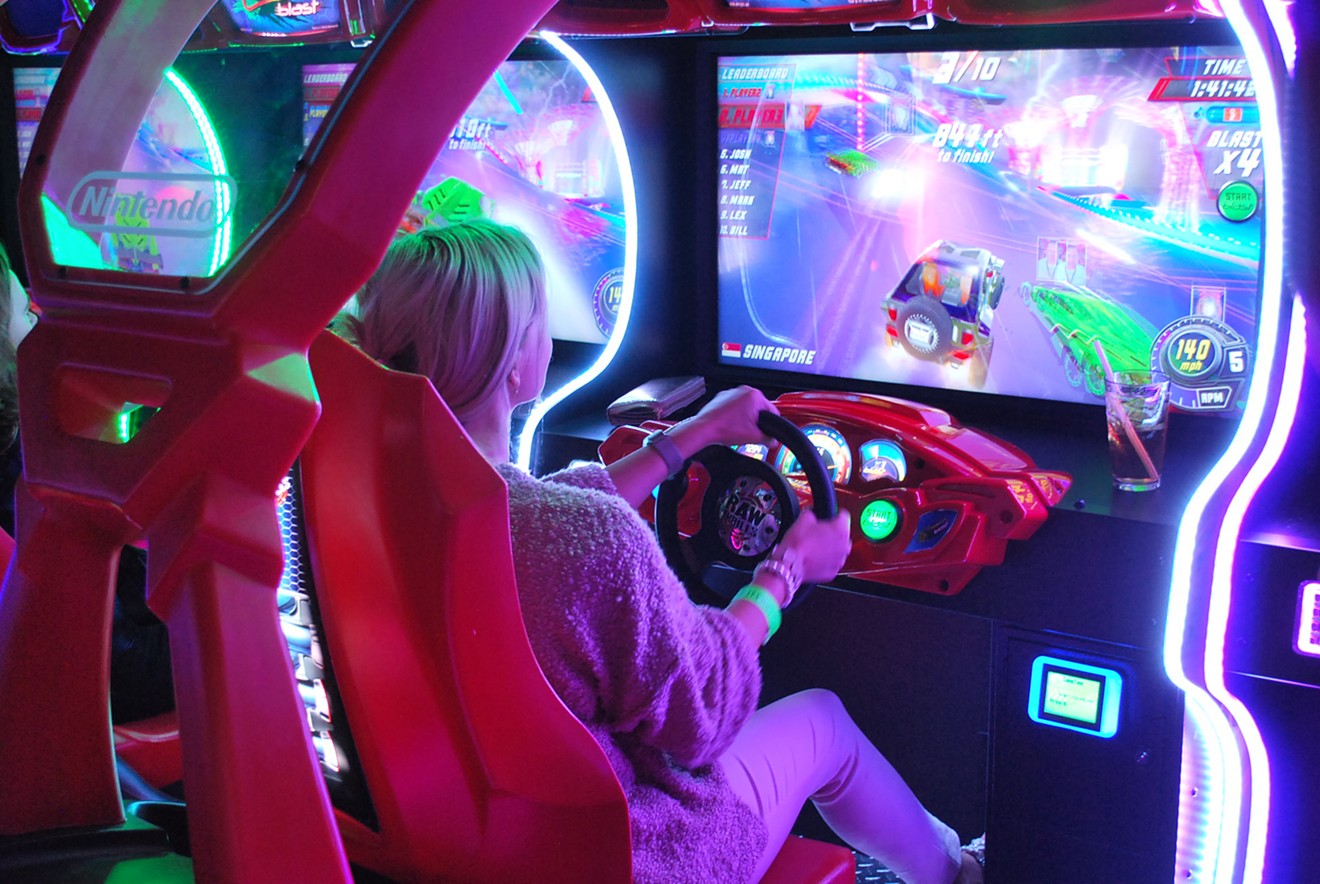 An immersive arcade experience at GameTime. Photo by Kelli Markunas
No matter your age, arcades are happy places. They're a welcome alternative to the standard night at the bar or the typical dinner and a movie date, and they allow us to feel like a carefree kid again. Hell, the chaotic sounds of an arcade alone can put you in a good mood — you know, that mix of catchy J-Pop and clanking air hockey pucks with a hint of "."

South Florida is home to a solid selection of these gaming playgrounds, with another, Punch Bowl Social, on the way.

Some of the area's arcades are famous. One over in Kendall is infamous. So which of the many arcades are most worthy of your quarters? Press start to because here's a look at the best arcades in South Florida.
1. Arcade Odyssey. Located in a Kendall strip mall between a salon and pizza joint, Arcade Odyssey is the closest thing South Florida has to the arcades of yesteryear. And not just because it's home to early '90s side-scrolling staples X-Men, The Simpsons, and Teenage Mutant Ninja Turtles: Turtles in Time. The place has a vintage setup, with covered-up windows to prevent light from sneaking in and over 130 games stacked side by side. There are no ticket redemption games like at a mega-arcade and, unlike at a , the small bar here is more of an afterthought.

But don’t think of Arcade Odyssey as outdated. doubled in size in 2018, adding a LAN PC area and the aforementioned bar. And and arcade collector Rick Medina is constantly swapping in the latest arcade imports and rare finds. One thing that hasn’t changed: A dollar can still go a long way at Arcade Odyssey. 2 p.m. to midnight Monday through Thursday, 2 p.m. to 2 a.m. Friday, noon to 2 a.m. Saturday, noon to 10 p.m. Sunday at 12045 SW 117th Ave., Miami; 305-253-2722; arcadeodyssey.com. 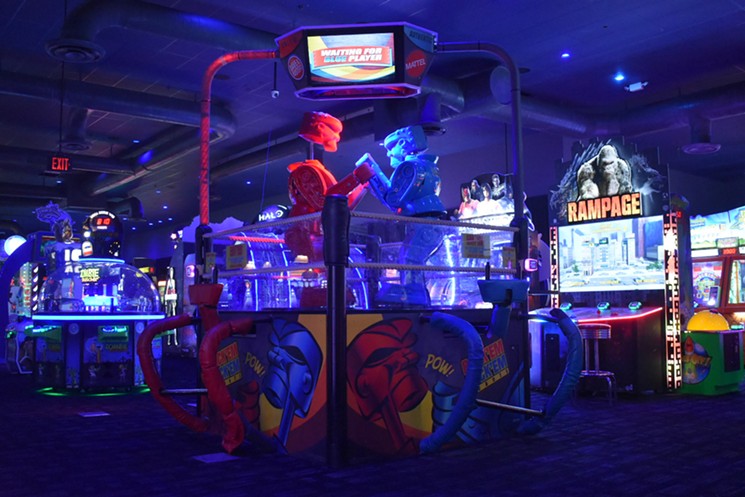 Dave & Buster's
Photo by Luis Gomez
2. Dave & Buster's. This 60,000-square-foot Dolphin Mall mega-arcade isn’t where you go to beat games. It’s where you go to get wowed by them. Dave & Buster's — more than half of which is made up of bars, pool tables, and dining areas — is loaded with tricked-out simulators that lure you in with bright lights and over-the-top displays. These simulators also come with seating, because God forbid you calories playing games.

You'll find many classic franchises here, just not the way you remember them. Pacman has been supersized and now comes with an epilepsy warning. The Rock-Em Sock-Em Robots toy has been converted into life-size robots. Remember Space Invaders, the bare bones arcade you’d find at a laundromat? It now comes with laser guns, seating for two, and a 108-inch LED screen. Some might consider that blasphemy, but those bells and whistles sure are effective. 11:30 a.m. to midnight Sunday through Thursday, 11:30 a.m. Friday and Saturday at 11481 NW 12th St. #E622, Miami; 305-468-1555; daveandbusters.com.

3. Glitch Bar. When it comes strictly to arcade decor, this Fort Lauderdale has earned this list’s high score. The DJ booth is covered in cassettes and the walls are adorned with comic book pages and stickers (in addition to massive murals of Mr. T and David Bowie).

But Glitch is more than just good looks. There's a decent selection of classic arcade cabinets to choose from, such as Ms. Pac-Man, Donkey Kong 3, Galaga, and Street Fighter II. If you're into video game consoles, just park yourself on the leather couches in front of the TV and pick up a controller. The consoles, like the arcades, are free to play. The hope is you'll buy drinks while playing free games. It's like the opposite of a casino. 5 p.m. to 2 a.m. Sunday through Thursday and 5 p.m. to 3 a.m. Friday and Saturday at 905 NE Fifth Ave., Fort Lauderdale; 954-616-5762; glitchbar.com. 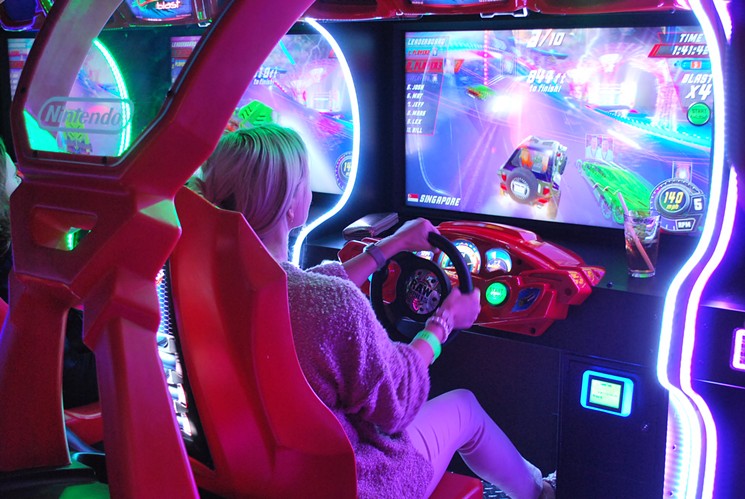 An immersive arcade experience at GameTime.
Photo by Kelli Markunas
4. GameTime. One of the few remaining reasons to visit the Shops at Sunset Place, GameTime offers the modern arcade experience: two floors, nearly 160 games, a separate pool table room, and a bar and renovated restaurant with 60-plus HDTVs. The 36,000-square-foot arcade is heavy on simulators, which allow you to get behind the wheel and race your friends in the six-player Indy 500 or step inside the Jurassic Park, Walking Dead, and Transformers Human Alliance shooter games and fire at will. On UFC fight nights, GameTime has been known to get crowded with mixed martial arts fans. Plan accordingly. 11 a.m. to 11 p.m. Monday through Wednesday, 11 a.m. to midnight Thursday, 11 to 2 a.m. Friday, 10 to 2 a.m. Saturday, and 10 a.m. to 11 p.m. Sunday at 5701 Sunset Dr. Suite 330, Miami; 305-667-4263; gametimeplayers.com.

5. Tenth Level Tavern. For the widest selection of video game consoles, from Atari and Nintendo to One and PS4, head to this Oakland Park . Yes, still works. No, you don’t have to blow into the cartridges.

Serious gamers will dig the frequent tournaments, which come with cash or beer prizes. Casual gamers will like the escape from the typical bar scene, in addition to the walk down memory lane. Everyone will like that games at Tenth Level Tavern — which decks out its walls with video game-inspired art — are all free. Just try not to hog the GoldenEye, OK? 5 p.m. to midnight Monday and Wednesday, 5 p.m. to 1 a.m. Tuesday, 5 p.m. to 2 a.m. Thursday and Friday, noon to 2 a.m. Saturday, and noon to midnight Sunday at 1242 NE 38th St., Oakland Park; 954-559-1414; facebook.com/tenthleveltavern.