"The original craft breweries, from Sam Adams to Boston Beer Company — they were the original craft-beer mavericks, people going against the grain and making a product that was completely different from anything being made at the time," Swanson tells New Times. "My goal was to open my own craft brewery with a maverick spirit."

To further that claim, later this month Unbranded will celebrate its inaugural Maverick Town Beer Fair, an event that stands not as a celebration of the brewery's two-year anniversary but of the inspiration of its origins.

A native of Houston, Swanson moved to Miami in 2014 to pursue a Ph.D. in philosophy from the University of Miami. After graduation, he decided to go a different route, tapping into a decade's worth of homebrewing experience to create Unbranded.

The story behind the name, however, goes much deeper, says Swanson: It pays homage to his family roots with a touch of U.S. history, to boot.

Swanson had originally planned to name his project Maverick Brewing, a nod to his ancestor and Texas legend Samuel Maverick, a man who, despite many accolades, is best known as the original "maverick" — the word used to define someone who refuses to conform or is considered an independent thinker.

Swanson often shares the tale of his great-great-great-great grandfather, who famously accepted 400 cattle as payment on a $1,200 debt. He chose not to brand his herd or the resulting offspring, and locals began figuring any unbranded cattle found wandering belong to Maverick.

At the turn of the 20th Century, the word was popularized when English poet Rudyard Kipling told the story of "The Mutiny of the Mavericks," a regiment of Irish musketeers he described as mavericks because they were "like masterless, unbranded cattle."

"He was this larger-than-life character with an incredible story, and I wanted to give him recognition here in Florida," Swanson says. "Decades later, it's still a fun piece of history to share." 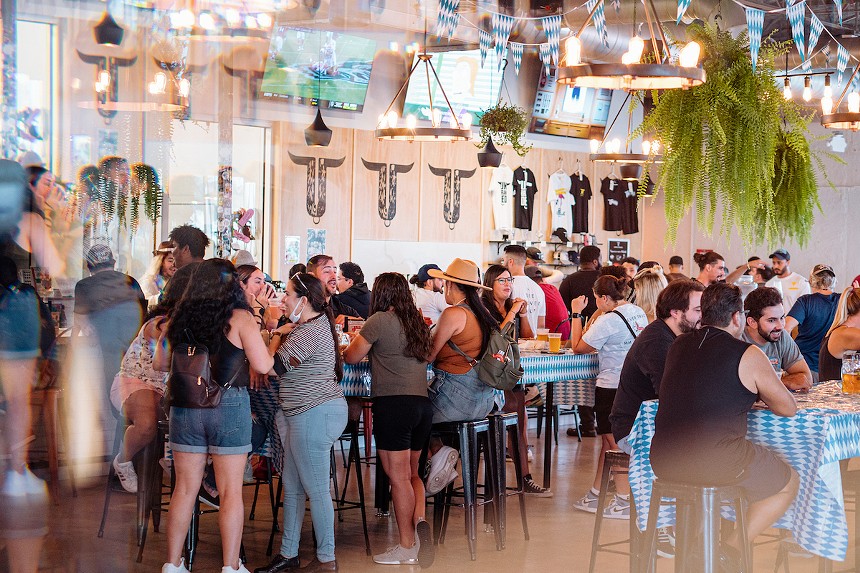 During the inaugural Maverick Town, guests will find more than 35 breweries from Florida and out of state. Entrance to the event includes unlimited pours of more than 70 beers, with each brewery showcasing two styles of its choosing. (For a full list, visit the Maverick Town Beer Fair event page.)

They'll be pouring alongside a number of Unbranded beers, including the flagship golden ale available only in the taproom, as well as the easy-drinking Hialeah Light American light lager; Guava Wheat, an American-style wheat beer finished on guava purée; Salt & Lime, an American lager finished with salt and lime juice; Hazy, an ever-changing New England-style hazy IPA made with a rotating selection of hops; and Champagne Room, a hard seltzer made with Belgian candy sugar and fermented with Champagne yeast.

An extensive list of food vendors will also be serving onsite, including Miami popups like Ted's Burgers, Panolo's, Haochi, Luchadough, and the Lazy Oyster.

General admission tickets to Maverick Town are available on Eventbrite. Priced at $65 per person, admission includes unlimited pours from 1 to 6 p.m., access to carnival games, and a five-ounce festival glass. VIP packages cost $115 and are available exclusively on the OZNR app. VIP admission includes one-hour early access with unlimited pours starting at noon, access to an exclusive VIP area and the carnival games, the aforementioned five-ounce festival glass, plus a limited-edition barrel-aged stout and a double IPA four-pack from Unbranded.

Maverick Town Beer Fair. 1 to 5 p.m. Saturday, December 11, at Unbranded Brewing Co., 1395 E. 11th Ave., Hialeah; 786-332-3097; unbrandedbrewing.com. Tickets cost $65 to $115.
KEEP MIAMI NEW TIMES FREE... Since we started Miami New Times, it has been defined as the free, independent voice of Miami, and we'd like to keep it that way. With local media under siege, it's more important than ever for us to rally support behind funding our local journalism. You can help by participating in our "I Support" program, allowing us to keep offering readers access to our incisive coverage of local news, food and culture with no paywalls.
Make a one-time donation today for as little as $1.