Tap 42 has opened in Kendall. Photo courtesy of Tap 42
Miami's latest round of openings and introductions includes the reopening of Jaguar Sun with a tapas-inspired pop-up called Gilda, the newest location for South Florida gastropub and craft beer bar Tap 42, and a pop-up from a Michelin-starred chef at the Surf Club.

Brava has reopened at the Adrienne Arsht Center.
Photo courtesy of Brava

1300 Biscayne Blvd., Miami
786-468-2365
arshtcenter.org
The Adrienne Arsht Center for the Performing Arts has reopened Brava, the restaurant located on the second floor of Arsht's Ziff Ballet Opera House. The opening coincides with the launch of a new menu heavily inspired by classic French cuisine, ranging from starters like sherry-spiked lobster bisque and filet mignon steak tartare to pan-seared salmon or coq au vin. For the finale, try the house-made Girl Scout cookies, including lemon shortbread, do-si-dos, and coconut macaroons. A five-seat bar serves wine, Champagne, beer, and specialty coffees. Open Tuesday through Saturday from 5 to 8 p.m., and Sunday from 4 to 7 p.m.

230 NE Fourth St., Miami
jaguarsunmia.com
Jaguar Sun has reopened its downtown restaurant with seating in its bar room. While chefs Carey Hynes and Will Thomspon will continue to operate Sunny’s at Lot 6 in Little River, guests at the original can enjoy their favorite Jaguar Sun cocktails and experience a new menu from Juan Garrido of MIA Market's Bocadillos Aita. Gilda, Garrido's new pop-up at Jaguar Sun, will feature a variety of Basque pintxos inspired by the chef's Spanish roots. The menu includes dishes like cold-smoked yellowfin tuna marinated in espelette oil, and lime, and served with Spanish potato chips, and the "Bikini," an elevated grilled cheese made with ham, Gruyére cheese, green-apple butter, and black truffle. Happy hour runs from 5 to 7 p.m. daily, featuring $1 oysters and a selection of $10 cocktails. Open Thursday through Sunday from 5 p.m. to 1 a.m. 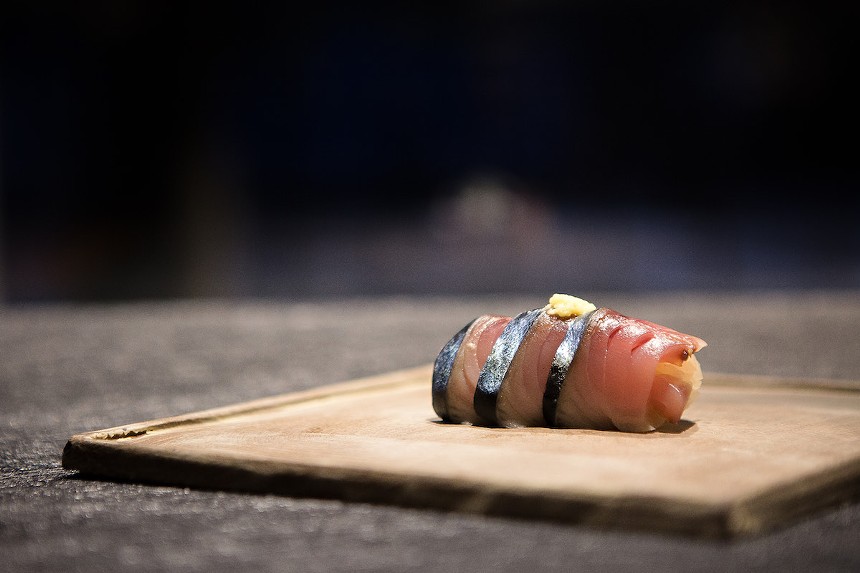 Kosaka and chef Shinichi Inoue can be found through March inside Miami's Four Seasons Hotel.
Photo courtesy of Kosaka

Kosaka at the Surf Club

9011 Collins Ave., Surfside
305-330-4000
thesurfclub.com
A world-renowned sushi chef has taken up temporary residence in Surfside. Michelin-starred sushi restaurant Kosaka and chef Shinichi Inoue (formerly of Sushi Azabu and Sushi Inoue in New York City) have teamed up for a collaboration that takes place through March 27. Located in the historic setting of the Surf Club’s Hemingway Tower, the pop-up presents Inoue's take on multicourse omakase. Guests can also anticipate other surprises served throughout the meal. The menu is subject to change and is priced at $300 per person. Open at 5 p.m. Wednesday through Sunday.

Tap 42 in Kendall is the chain's largest location to date.
Photo courtesy of Tap 42

11735 Sherry Ln., Miami
305-279-1846
tap42.com
Tap 42, the craft beer bar and gastropub that debuted in Fort Lauderdale has opened its ninth South Florida location, in Kendall. Located in the Town & Country Center, the restaurant will be the brand's largest location to date and will include a sweeping covered patio area. The local chain is known for its modern interpretations of gastropub fare, a selection of over 40 craft beers on tap, and its take on the weekend-long bottomless brunch featuring options like mimosas, bloody marys, and Funky Buddha Floridan or 42 Hazy Daze. Open Monday through Thursday from 11:30 a.m. to 11 p.m., Friday from 11:30 a.m. to midnight, Saturday from 11 a.m. to midnight, and Sunday from 11 a.m. to 10 p.m.
KEEP MIAMI NEW TIMES FREE... Since we started Miami New Times, it has been defined as the free, independent voice of Miami, and we'd like to keep it that way. With local media under siege, it's more important than ever for us to rally support behind funding our local journalism. You can help by participating in our "I Support" program, allowing us to keep offering readers access to our incisive coverage of local news, food and culture with no paywalls.
Make a one-time donation today for as little as $1.