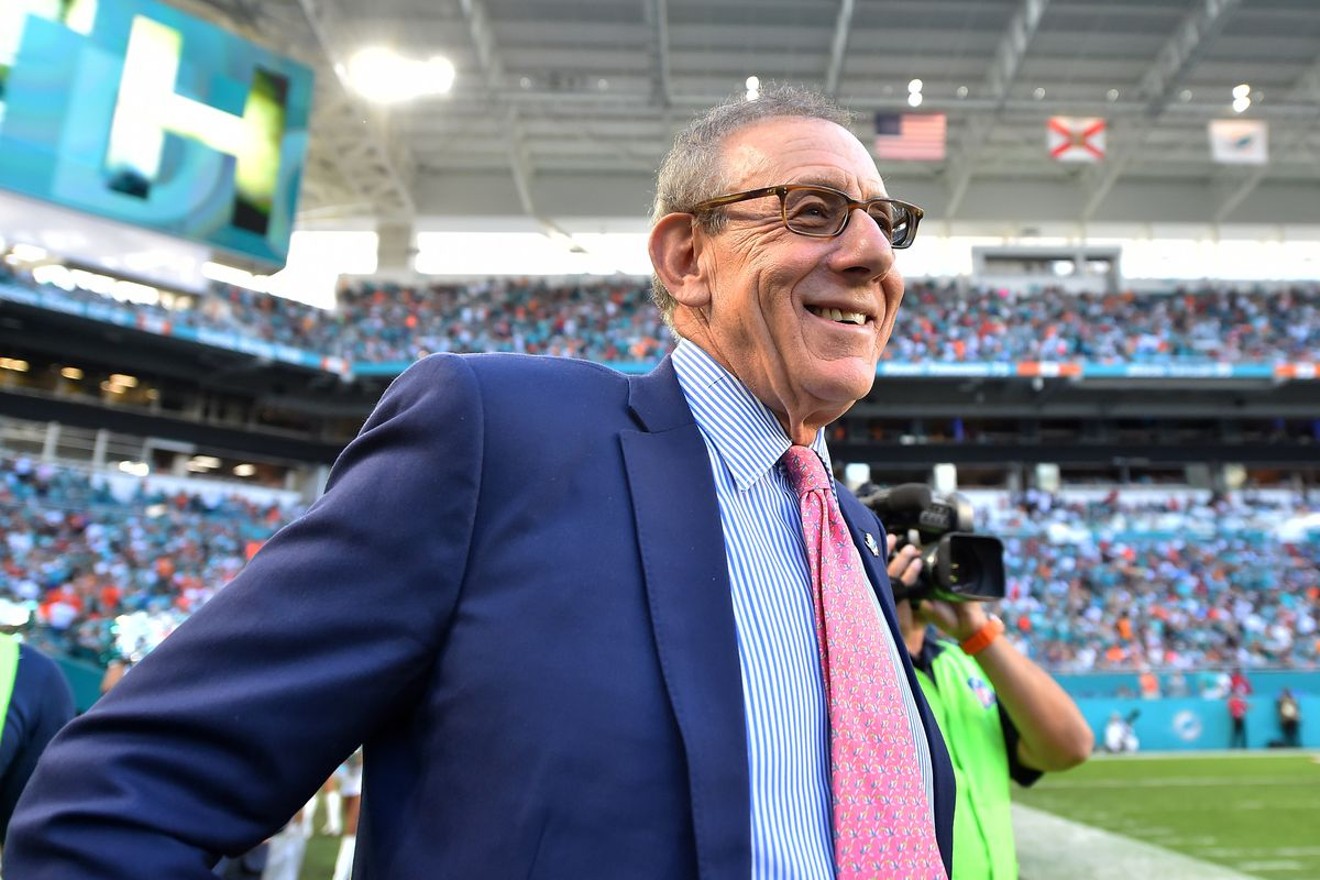 Miami Dolphins owner Stephen Ross Miami Dolphins
Since Stephen Ross became part-owner of the Miami Dolphins in 2008 and the majority owner a year later in 2009, the franchise has been an unmitigated disaster, on and off the field. That includes this season, which brought a TMZ-level scandal and a persistent fixation on a terrible idea. Through it all, the one common denominator has been an owner who simply cannot get much of anything right.

Dolphins fans have been more than patient, but it's clear the franchise is in disarray. The fish head rots from the top. It's time for a major change. That's right: It's time for Miami Dolphins owner Stephen Ross to fire himself.


Stephen Ross is the reason the Dolphins will never be successful. Absentee owner

Being an NFL owner is as much about putting in place the right people to make decisions and having the pulse of your team as it is writing checks and ensuring the facilities are nice and shiny. Ross spends little to no time in Miami looking after his massive investment: He flies in for games and heads back to New York when they're done.

You can't expect to be the owner of a Super Bowl-caliber team when you can't even be bothered to live less than 1,000 miles away from it. The Miami Dolphins are not a building in Tokyo to check in on every few months or make a couple of phone calls about; they're an organization that runs on people, relationships, and how they all work together.

That leads us to the next point.

Stephen Ross puts the worst people in charge of hiring other people, then he listens to them for far too long before he figures out he's getting bad advice. Jeff Ireland, Mike Tannenbaum, Chris Grier, and Tom Garfinkel — the list of people Ross has tasked with running his multibillion-dollar business while he's in New York talking about real estate or in Michigan fundraising for the university goes on and on.

It would be one thing if Ross was an absentee owner who hired someone like Pat Riley to look after things. But he's gotten it wrong at every turn, abandoning his investment to poor management and even poorer employees.

Once again, the Dolphins are conducting a head-coaching search. It's nearing a half-dozen times that has been the case since Ross bought the team barely a decade ago.


The Embarrassment of the Brand

If the buck stops with the owner, Stephen Ross is responsible for not one, but two TMZ-level scandals on his watch. The NFL loves to punish players for "disrespecting the shield" and tarnishing the league as a whole, so it's only right Ross should take the hit for embarrassments that occur on his watch.

The Richie Incognito bullying scandal and footage of coach Chris Foerster hoovering cocaine on camera are black eyes for Ross. But they'll also stick with the organization long after he sells the team and profits billions.


He Doesn't Get the Real Miami

Since the moment Ross strolled flew into town, he has treated Miami like something he'd seen in the movies. He thinks he understands what Miami is all about, but the Miami he knows is Dwyane Johnson, Jennifer Lopez, and Fergie from the Black Eyed Peas.

It's high time a Dolphins owner invested in Miami as more than just a toy. Like the Miami Hurricanes as of late: For the good of the team, it's time for the Dolphins experience a leader who understands the people who support the team, the history of the franchise, and what it means to actually live in Miami.

The Dolphins' incredibly distasteful, untimely, and downright embarrassing pursuit of Deshaun Watson this past season has been well documented. But it bears repeating that everyone involved deserves to be fired over how it was handled, including Ross himself. Pursuing a player who isn't even playing for his own team owing to 22 sexual misconduct civil lawsuits would be cause enough, but doing so while you have a young quarterback — drafted number five overall — who hasn't even played a full season's worth of football is appalling.

It seems that if Stephen Ross had his way, Watson would be a Miami Dolphin right now — and that's precisely the sort of flawed decision-making that has led to all of the previous mishaps and embarrassments.
KEEP MIAMI NEW TIMES FREE... Since we started Miami New Times, it has been defined as the free, independent voice of Miami, and we'd like to keep it that way. With local media under siege, it's more important than ever for us to rally support behind funding our local journalism. You can help by participating in our "I Support" program, allowing us to keep offering readers access to our incisive coverage of local news, food and culture with no paywalls.
Make a one-time donation today for as little as $1.