Jazz Is Back at MOCA Plaza 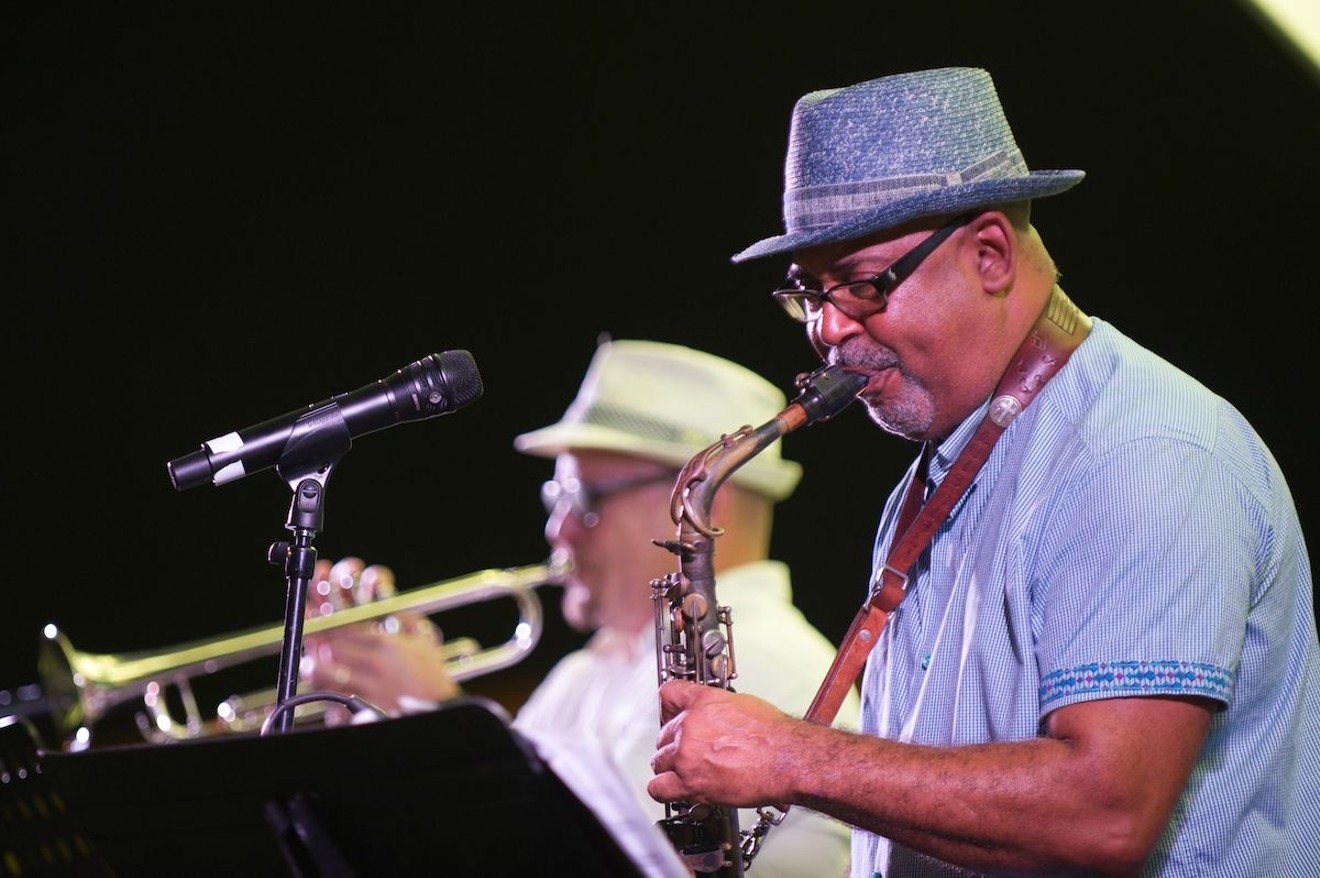 The Luis Disla Latin Jazz Ensemble performed in September 2021 at Jazz at MOCA. Photoby Daniel Bock
MOCA Plaza had been quiet since March 2020.

Usually, the public square adjacent to the Museum of Contemporary Art North Miami and City Hall buzzes with music, voices, lights, and laughter every last Friday evening of the month. But then COVID-19 came along.

Almost two years later, the music and voices, the lights and laughter are back at the plaza, with the official relaunching of Jazz at MOCA.

Since 1999, Jazz at MOCA has invited people from diverse backgrounds to unite for a night of music in the heart of downtown North Miami, presenting a variety of styles including swing, Brazilian, Afro-Cuban and Latin jazz. The lineup typically has ranged from classic staples to newer sounds, from acts like the South Florida Jazz Orchestra to the Ashley Pezzotti Jazz Quartet.

“Over the course of COVID, the jazz program is one that we certainly missed,” says the museum’s executive director, Chana Budgazad Sheldon. “It brings people together, which is what MOCA seeks the most.”

Like many institutions, MOCA pivoted to online programming to keep serving the community throughout the pandemic. In this way, jazz lovers had access to continued free concerts via livestream and on the radio, at WDNA-FM 88.9. That series, titled Virtual Jazz at MOCA, was hosted by Carter Jackson-Brown, and — though it’s no longer offered this year — past concerts are still available to view online.

Then in September 2021, for Hispanic Heritage Month, MOCA organized an in-person concert at the plaza after months of virtual programming. The performance by the Luis Disla Latin Jazz Ensemble served to woo back the crowds and set the stage for the official relaunch in the new year.

The crowds reappeared for the special occasion — “the response was incredible,” Sheldon says — and the jubilant sound of jazz resounded once again.

“The energy was palpable across the plaza, with hundreds of neighbors filling our seats for an evening of fun and dance together,” Covach said.

The next concert, on February 25, honors Black History Month with a special performance of energetic-yet-soulful blues by Miami-based duo Ike and Val Woods.

Although Jazz at MOCA is an outdoor concert, seats are spaced out to allow social distancing, and guests are encouraged to wear masks. The event takes place rain or shine, with seating available on a first-come, first-served basis. The museum galleries are open from 7 to 10 p.m. by donation.

Sheldon announced an “exciting lineup for the next six months.”

“Now that we are back, I would say the plaza was animated as ever,” she said. “Certainly, artists and musicians are excited to play in person again.”

Jazz at MOCA. 8 p.m. on the last Friday of every month, at Museum of Contemporary Art North Miami, 770 NE 125th St., North Miami; mocanomi.org. Admission is free.
KEEP MIAMI NEW TIMES FREE... Since we started Miami New Times, it has been defined as the free, independent voice of Miami, and we'd like to keep it that way. With local media under siege, it's more important than ever for us to rally support behind funding our local journalism. You can help by participating in our "I Support" program, allowing us to keep offering readers access to our incisive coverage of local news, food and culture with no paywalls.
Make a one-time donation today for as little as $1.
ArtburstMiami.com is a nonprofit source of theater, dance, visual arts, music, and performing arts news.