There was a time, after the extinction of dinosaurs and the ascension of Homo sapiens, when pinball ruled the Earth. Miami, like most major cities, was dotted with arcades housing dozens and dozens of flippered, belled, whistled, and generally colorful games that required concentration, eye-to-hand coordination, and a certain je ne sais quois to master. Then came Pong. Donkey Kong. Space Invaders. Galaga. Mr. and Ms. Pacman. Pinball survived but was relegated to the shadows. Xbox, Nintendo, and PlayStation (the third version of which will be Sony's first global release, an endeavor so far beyond the company's usual Japan-then-other-nations-after-fixing-glitches approach that it has been postponed) have pretty much sent pinball the way of the 'saurs. In the U.S. there were one million machines in play in 1989. Ten years later the number sank to a depressing 360,000. Revenue dipped from $2.4 billion to $1.08 billion in the same period, according to trade publication Vending Times. Five versions of the classic game are available for play at the family-friendly Fun-O-Rama.

Afro-Cuban fusion singer Descemer Bueno's calls home to Havana are echoing from Miami stages across the Florida Straits to the seawall along Malecón Boulevard in the Cuban capital, and even onto Madrid's music scene. Bueno, a founder of legendary Latin funk band Yerba Buena and current frontman of Siete Rayo, boasts a brand of funk, jazz, merengue, reggaeton, hip-hop and Afro-Cuban rhythms all his own. It was recognized with a record deal from Universal Latino, as well as Spain's prestigious Goya Award for Best Music Written for a Film in the movie Havana Blues. When Bueno belts out the song "Habana," it sounds like an eerie cry, a yearning for unification in the Cuban diaspora. "If I never go back, it will break my heart," he sings, followed by a reinforcement of all that he is: "I represent the Afro-Cuban generation." Let's hope that cry will lead to a new understanding of Cuba in all its of political and ethnographic makeup.

Best Nightclub to Die in the Past Year

In the basement of a shuttered hotel at mid-Beach, barflies in the know gathered daily to celebrate the joys of the perfect neighborhood watering hole. Since 1958, Chamber Lounge had served good advice along with impressively stiff drinks (and occasional freebies for those who looked like they merited a hangover). The friendliest bar in town also had the most diverse clientele. On any given night, models and celebs could be seen rubbing elbows with residents and snowbirds while hipsters exchanged toasts with the city's upper crust. The only thing missing was bad attitude. This 2004 Best of Miami winner for Best Neighborhood Bar is scheduled to become yet another condominium conversion.

Once a month DJ Jazzy Jeff (of "... and the Fresh Prince" fame) spun at Shine at the Shelborne, making for a night of booty-grinding and straight-up drunken fun. In between serving cosmos and cocktails, scantily clad bartenders danced on the bar, much to the pleasure of hollering bystanders of the male gender. Popular hip-hop tracks satisfied the crowd's need to boogie to songs everyone knows. There must have been some subliminal message in Jeff's mixes, urging patrons to imbibe to the point where inhibitions, budgets, and shame were abandoned. Or maybe it was just the combination of a rowdy party and exceptionally strong drinks that kept cheeks rosy, the booze flowing, and bodies moving. Jazzy Jeff's bumping sets and star appeal brought in the masses for a party that any South Beach regular could appreciate. Okay, so you missed that gig, and Shine is closing for renovations, but you can still catch Jeff at other South Florida venues. Check out his Website for more info. 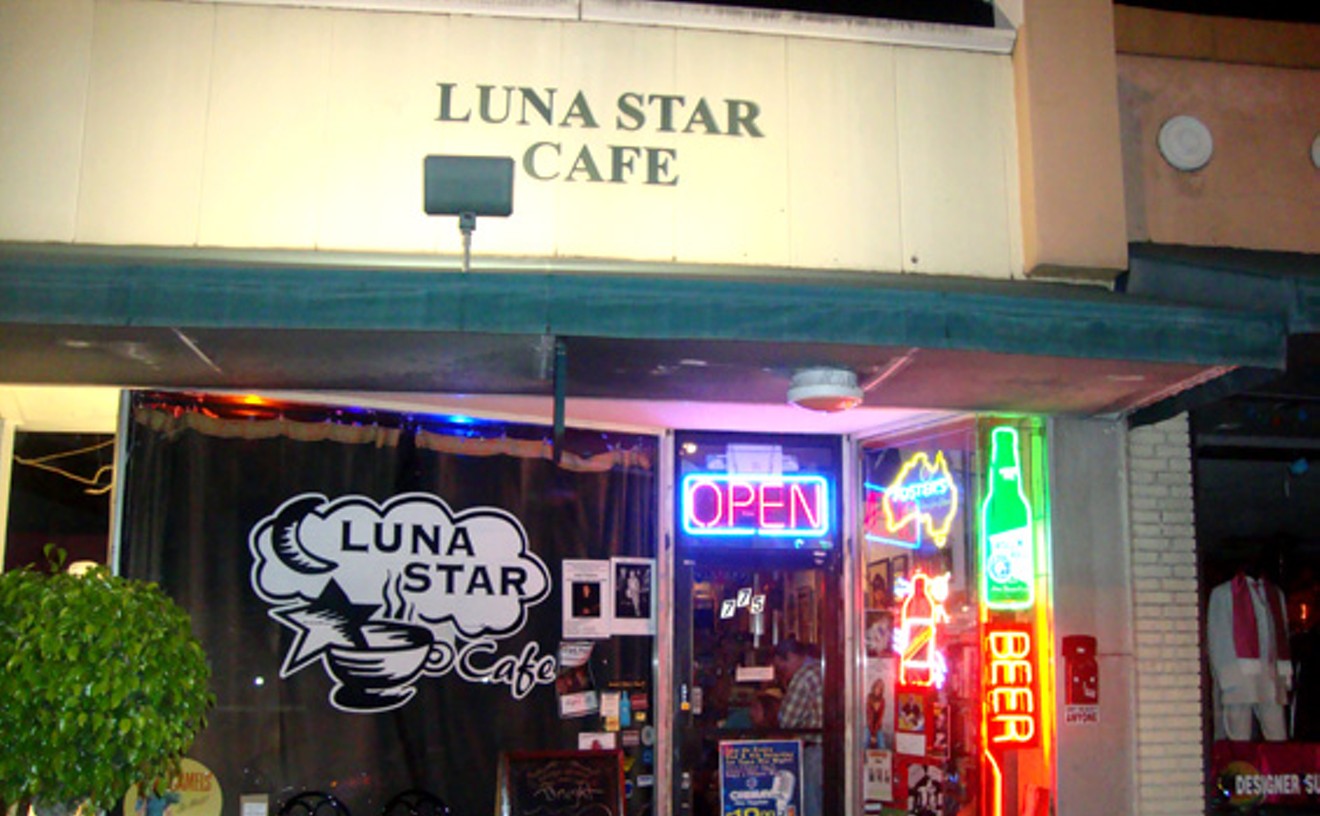 The what-ifs are haunting. They say you have a beautiful voice. That you can dance. That you're really funny. Are you truly an undiscovered star? Whether it's music, dance, theater, or comedy, get over the stage fright and test your material before a live audience. Miami is not, for sure, New York, but at least we have Luna Star's open mike twice a month (every second and fourth Saturday, beginning at 8:00 p.m.). "It's a free-for-all. Music, poetry, comedy. You can do whatever you want," says owner Alexis Sanfield. It's also first come, first served. Put your name on the list early -- because roughly seven to nine performers get a shot each night. Good news for newbies: The audience is very supportive. No boo birds at Luna. And even if you bomb, you can drown your sorrows in one of Luna's 100 beers. Prices range from $3 bottles of Rolling Rock to a Belgian for $17. 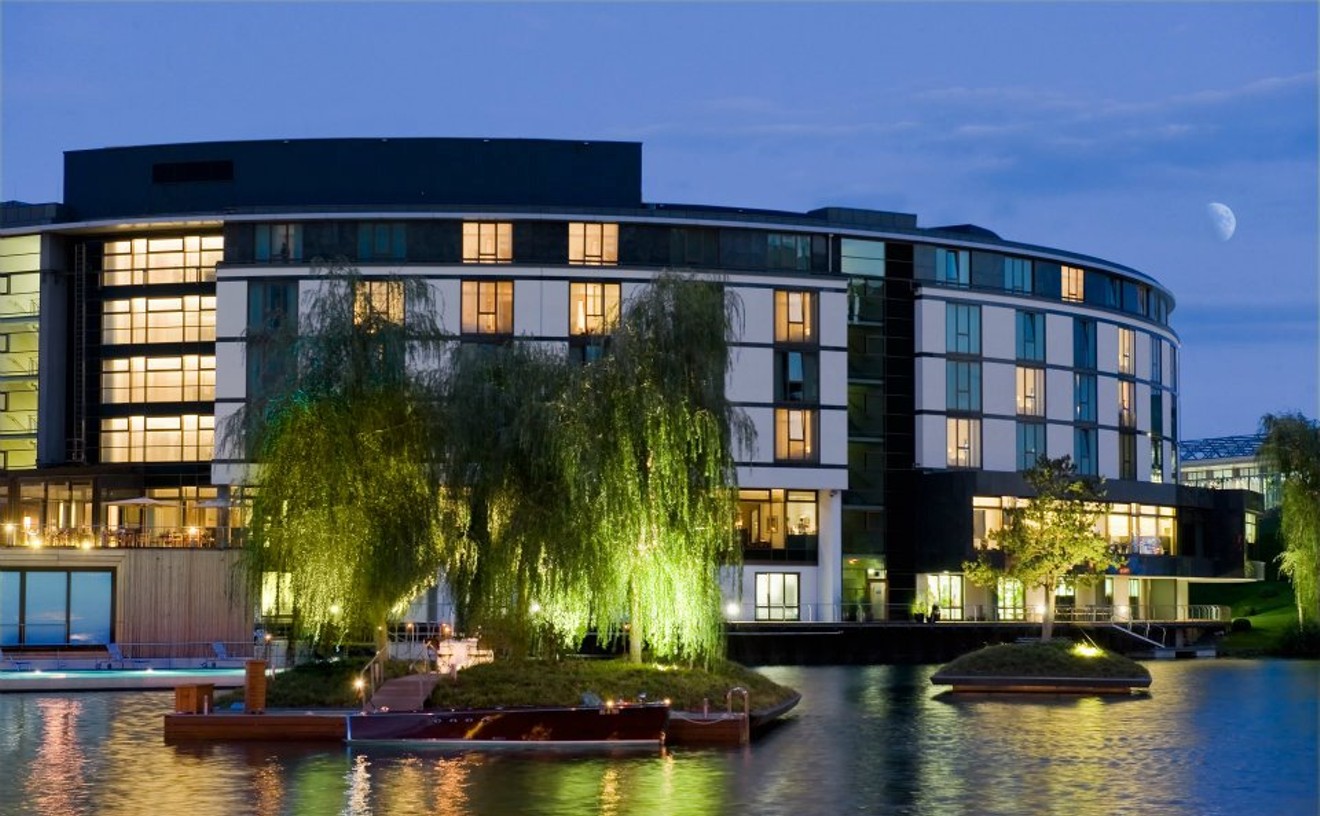 Tucked away inside the posh architecture of the Ritz-Carlton Key Biscayne, you'll spy a thatched hut that's light years away from the kind of prissy sensibility one might expect from such a fancy-pants hotel. Cantina Beach feels like a different key than Biscayne. After a decadent evening of tequila shots, passion fruit margaritas, and freshly made guacamole at this oceanfront restaurant, you just might begin thinking you've crossed the Seven Mile Bridge and gone to Key West. The view of the Atlantic is breathtaking, the décor is to die for, and the menu offers 50 different tequilas. Ay, caramba! A lush could get into a world of trouble in a place as wonderful as this one.

It's almost 7:30 p.m. You've just spent the past two-and-a-half hours stuck in bumper-to-bumper traffic on I-95, the Golden Glades Interchange, and the Palmetto Expressway. You're only minutes away from your two-story condo in Miami Lakes. But as you exit at Miami Lakes Drive, you find yourself driving into the Royal Oaks Plaza shopping center lot. You park your car and stroll into the Billiard Club, where James the bartender is already pouring you a tall, cold glass of your favorite pilsner. At the end of the bar, a group of lovely suburban honeys takes full advantage of ladies' night, ordering free cocktails as if drinking were going out of style. Bon Jovi, Posion, and other memorable big-hair bands blare from the jukebox. Some of your neighbors are there too, challenging you to a game of pool or darts. The loser has to mow the winner's lawn for the next two weeks.

Darts are not a mere parlor game for you. You have strong opinions about the great steel versus soft tip debate. You worship Bob "The Limestone Cowboy" Anderson and Eric Bristow. And you practice. Hence it pains you to see a bunch of chuckers throwing all over the clock. As a member of the Miami-Dade Darting Association, you need a serious dart and a serious board. Tom's NFL Club doesn't mess around: It boasts two British-made dart boards, with a proper green chalkboard for scoring. And it obeys the first two rules of the game: First, no mixing of darts with other parlor games. Darts are in a nice carpeted corner, away from TV sets and pool. Second, don't give the drunken man easy access to the darts. To get steel tips at Tom's, you need to ask. Dartspeople who use performance enhancement should take note: Tom's happy hour, 3:00 to 7:00 p.m. weeknights, offers domestic drafts for two bucks.

Glance through the glass door in the Sweetwater strip mall, and you see a couple of videogames and a bar in the background. Nothing to get excited about. But once you enter Inside Billiards, some kind of Narnian transformation occurs: You just keep walking and walking, and the back wall gets farther away, until the room opens up into a huge, high-ceiling hall ringed with television sets and filled with rows of well-kept, full-size pool tables. Rates are reasonable: Tables cost $9.90 per hour for two people, and everyone playing pool gets free beer Wednesday and Thursday nights. Inside Billiards is open daily from 1:00 p.m. to 3:00 a.m.