Romulo del Castillo and Josh Kay, Miami natives who form the electronic duo Phoenecia, started Schematic Records in 1996 in Perrine with friends Push Button Objects and Seven, founder of Chocolate Industries, the label that debuted Prefuse 73. "We are an artist-run label/collective. We have no intent on running a real business," Castillo says. "If it sells, great. If not, great." Schematic boasts an impressive roster of electronic musicians, including Secret Frequency Crew, Otto Von Schirach, and Dino Felipe, all of whom are receiving heavy rotation on radio stations such as the University of Miami's WVUM (90.5 FM). The label seems to attract and encourage amazingly creative, diverse artists from all over the world, ranging from the loud, distorted Hearts of Darknesses (listen to "Air Guitar" on their 2003 album, Music for Drunk Driving) to the low-key melodic beauty of Secret Frequency Crew (check out "Aqua" on the group's 2005 album, The Underwater Adventure Hop Secret Treasure). Despite its founders' claimed lack of business ambition, Schematic has artists whose albums are featured on iTunes, so you can hear samples of the work for yourself.

Calling Shuttle Lounge a band is like calling the online community World of Warcraft a videogame. Like the latter, Shuttle Lounge is an environment, a lifestyle. Stuff happens, some of it bad, most of it thrilling. The members of Shuttle Lounge -- Dik Shuttle, Ca$$iu$ Casio KRS "le juan" Love Sebastian Bacherach de la Fenderr Rrhodes, Deuces, Major Whitey Herzog, MalcomxXx, and RavelSTEIN, are inhabited presences who are in character for each and every second of every performance. (And there are a lot of performances, most of them at Churchill's, but ShuttleLoungeLand laps all across SoFla.) The band calls itself a "lounge act," hence the name, and the shtick does include quite a bit of Bill-Murray-as-that-guy-patter, but the lineup is straight-ahead rock: several guitars, some horns, and a really large drum kit. Shuttle Lounge has cover tunes and it has original tunes, but what it seems to excel at is a sort of original-cover mashup, sometimes writing new lyrics for existing melodies and often throwing snippets of lyrics -- a kind of "found poetry" approach -- from other songs as well as au courant pop culture catch phrases into band-written scores. Even if you don't get Dik Shuttle's asides about the inadequacies of parking on the swale or living in suburban Broward County, a Shuttle Lounge live show is infectiously entertaining, and, yes, maybe this is the "lounge" influence too, even a little classy. Even at Churchill's.

Despite his affinity for street performing, Jesse Jackson is not homeless or down on his luck. But if the slim, scruffy guitar player on Lincoln Road asks if he can play you a song, let him. Don't worry -- despite sharing a name with a famous outspoken reverend -- the soulful folk singer won't preach to you. You will, however, leave a fan. And with numerous gigs at venues like Stop Miami, the recent Langerado Festival, and Churchill's, he's acquiring lots of followers -- and it took him only five years.

A spacy hippie chick raised in Miami, Raffa Jo Harris is half of folk duo Raffa and Rainer. Her beautifully sensitive ballads are about coincidences, friends, love -- all the sweet things in life -- and they're usually prefaced with a kind of story-behind-the-song. She's often compared to a sweeter Joni Mitchell, and, says one fan, she can make the hardest person go all mushy. Perhaps her next gig should be on I-95 during rush hour. 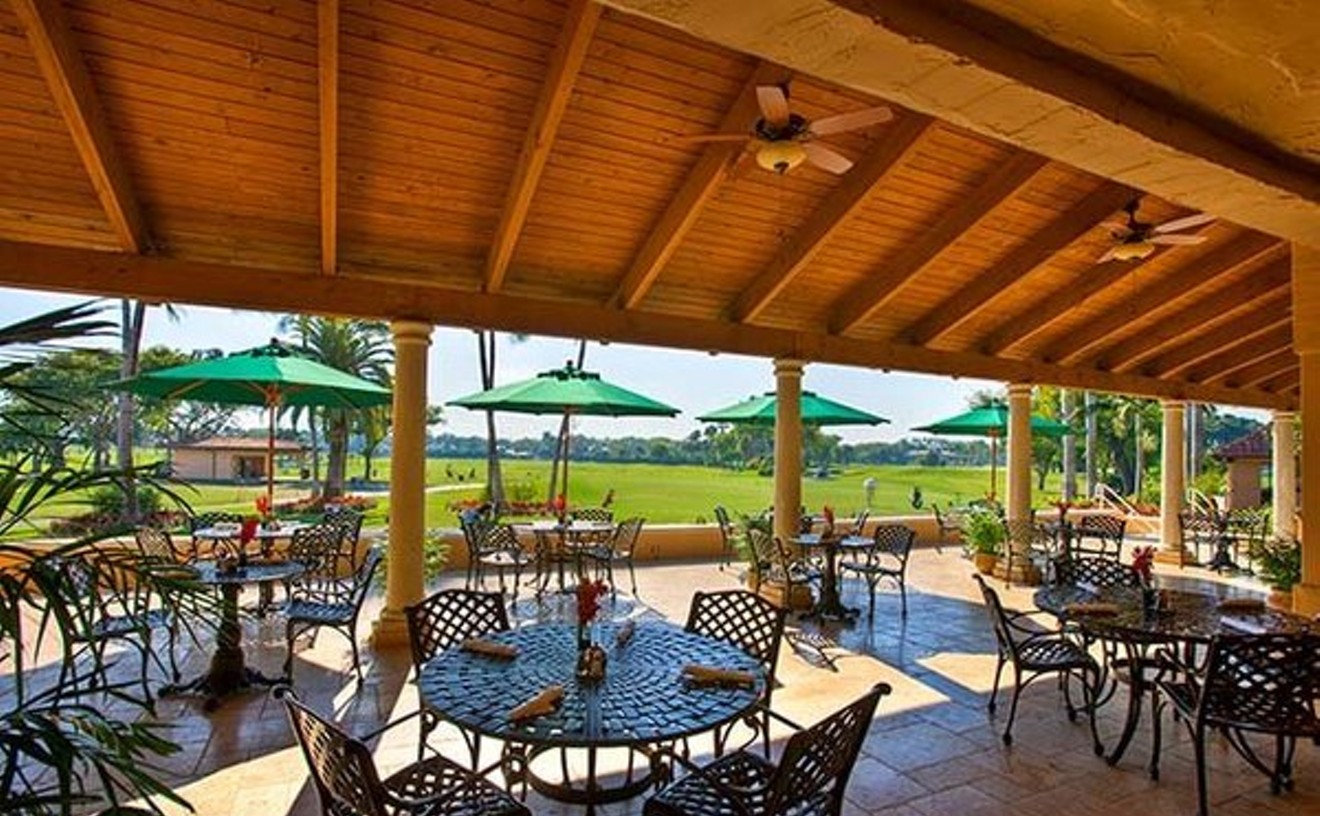 A sexy librarian walks into another bar. She is still looking for the perfect man, but tonight she settles for the companionship of a perfect martini. Over the years her fickle taste has migrated from gin to vodka. (Go ahead and call her a heathen, but James Bond jumped the juniper berry ship and never looked back.) A year older, a year wiser, and the bar code on her library card a little worse for wear, the bibliophile has gone dirty but still wants class. This swanky bar set in the terribly romantic Biltmore Hotel has the feel of an intimate parlor, with brocade settees, warm candlelight, and black-and-white photos adorning the walls. The charming Octavio mixes a superb beverage -- shaken with enough vigor to splinter the ice without diluting the spirits -- and is happy to lend a sympathetic ear as the librarian scans the room for a traveling businessman who'd be happy to pay for her $14 cocktail (yes, it's a bit much, but that's what you pay for top-shelf in this town). As she sips her seductively smooth and salty libation, the librarian spies a diamond-studded Cartier timepiece on a handsome suit. He extends his hand to make her acquaintance, but the flash of a gold wedding band immediately redirects her gaze across the bar, where she spies a rugged outdoor type holding a Bill Bryson book in one hand and a martini in the other. She smoothes her skirt and lets down her hair before she crosses the room to see how the next chapter of her delicious novel will unfold.

There's no denyin' that hip-hop/reggae artist Fitzroy has sprung like a lion onto Miami's modern multicultural music scene this year. In only a matter of months, the Bajan journalist-turned-singer became a bar-hold name, packing the house at Jazzid, Transit Lounge, and the patio of Stop Miami, while he swung his massive mane of dreads and sang to the Most High. His sound has a modern, urban flair, enhanced by echoing hip-hop and sound bytes to create a naturally mystic ambiance. Add that to a strong voice, a knack for contemplative lyrics, and a whole lotta stage charisma, complete with cheeky Caribbean humor. His business card reads, "Fitzroy: Available for weddings, birthdays, exorcisms, and resurrections." The artist is packaging those ritual practices on his album Paradise Low, which he hopes to release this spring.

There's nothing like a rocking family fan club to renew a band's energy. This year Tereso proved that childlike spunk is as important as looking like hardcore punks, when they let the Teresitos (four-year-old Ella, six-year-old Belen, and thirteen-year-old Luna) jump onstage to shake their butts and shout back-up vocals alongside singers uncle Chelo Crocetti and dads Juan and Alejo Rozas. After eleven years together, the bandmates produced their first full-length album, Youth Divine Treasure. The CD offers a hard-driving garage-grunge band sound with an explosion of youthful energy, no doubt a testimony to hanging with the kiddies. But in March the gals had to stay home and prep the newest addition, three-month-old Delfin. Tereso packed its caravan with electric guitars and amps for its first major non-Miami tour -- first stop: Los Angeles -- where the band opened for Volumen Cero.

For years Matthew Sabatella has been an important parochial player, first as the bass player and a singer for masterful rock band Broken Spectacles, then as a sideman for a number of groups, a solo artist, producer, Webmaster. Slight and soft-spoken, he has always been a large and loud presence in South Florida music. If any criticism might be leveled, it would be only that he spread himself a bit thin, trying to accomplish too much both as an artist and advocate. A couple of years ago Sabatella, in the tradition of documentarian Ken Burns, became enmeshed in a vast and significant project: chronicling American history through song. The acoustic Ballad of America, Volume 1: Over a Wide and Fruitful Land has been embraced by critics, museums, and fans. Featuring a number of top South Florida players and instruments such as banjo, fiddle, concertina, resonator guitar, bodhran, harmonica, mandolin, and upright bass behind Sabatella's potent baritone vocals, the record is both modern-sounding and faithful to its inspiration. It includes a twelve-page booklet of histories for each song. The second volume, the musician promises, will be released this year. Flashing forward to the past, Sabatella is bringing forth some beautiful and important music. The commitment he's shown and passion he's clearly felt are equally admirable.

Truly a neighborhood bar, Keg South is family-friendly in the afternoons and early evenings, when the place fills with happy-hour revelers as well as parents with kids still uniformed from soccer or T-ball practice. Tucked away on a sidestreet just across 137th Avenue from the Kendall-Tamiami Airport, this Keg South location (there is another farther south) is the watering hole for residents from Kendall to Country Walk and the many unnamed portions of unincorporated South Miami-Dade that make up the surrounding area. Excellent bar food is available (the catfish po'boy is excellent, as is the simple queso blanco appetizer), and diversions abound: In addition to the TV sets tuned to local sports, the bar boasts a pool table and several arcade-style videogames.