This excellent store has four locations in Miami-Dade, but this one employs the friendliest staff and is next to (first-rate Spanish restaurant) Casa Paco's excellent deli, so it wins. There are other shops specializing in guayaberas, the semiformal warm-weather shirt of choice for abuelos worldwide, but this joint combines the best selection -- long- and short-sleeve varieties come in every color and pattern, from Johnny Cash black to pinstripe -- and the best prices, beginning around $35. Guayaberas Etc. also carries high-end linen shirts and dress slacks, as well as women's clothing. 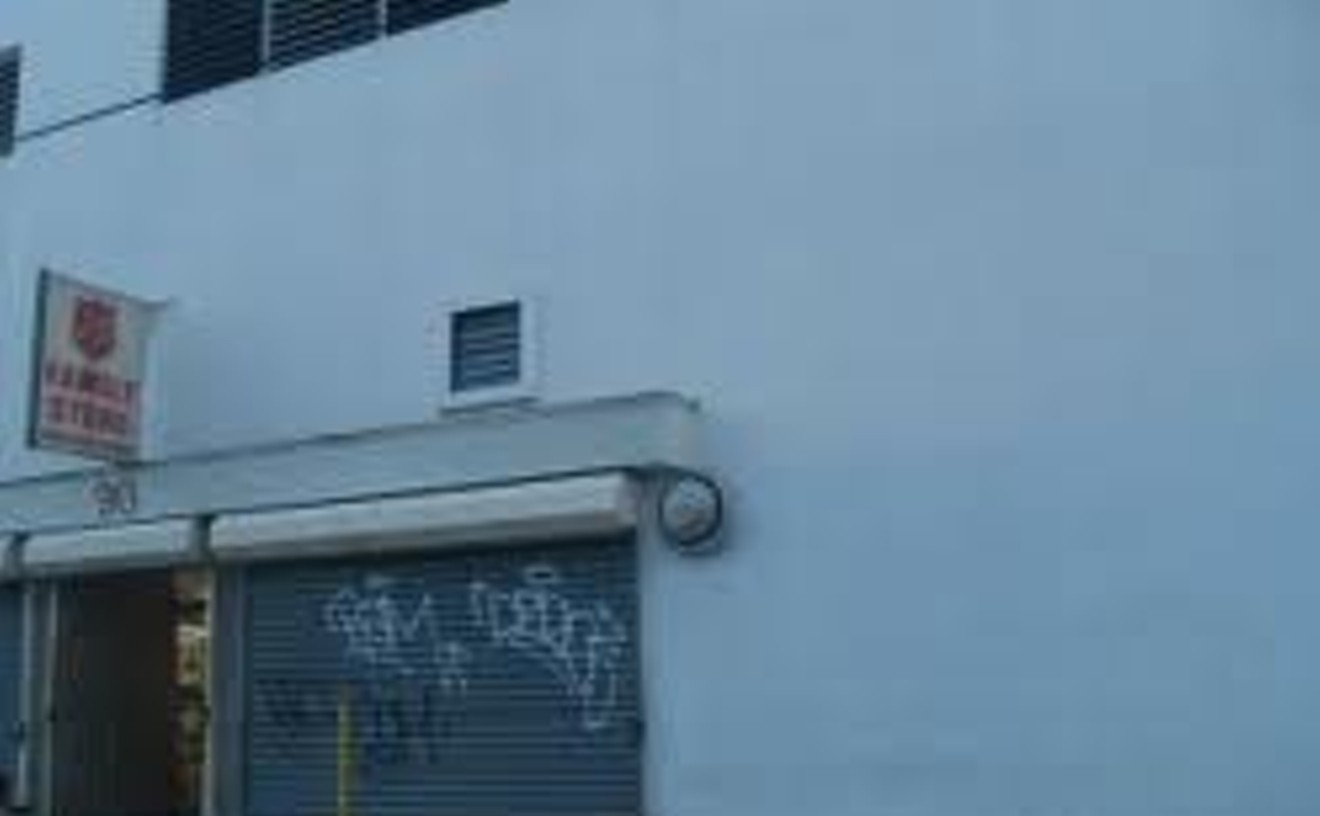 In Spanish, sentir cubano means "to feel Cuban" -- as if living in Miami and consuming your daily dose of cortaditos were not enough. So maybe this Calle Ocho shop should be called Ser Cubano, "to be Cuban," because if you weren't already blessed by birth, this store has all the ingredients to help you become, at the very least, a wannabe Cuban. Begin with apparel: Buy yourself a guayabera, a T-shirt with the emblem of a Cuban baseball team, and an enormous belt buckle emblazoned with the Cuban flag. Then move over to the cigar aisle, stock up on a couple of stogies, and grab a lovely taxidermied rooster for good measure. The music section is stocked with old-timey favorites like Beny Moré, Celia Cruz, and Barbarita Diaz, perfect to dance to while you make a café con leche with your new coffeemaker and a medianoche with your new sandwich press. (The place has cookbooks in English and Spanish if you need some help.) Don't forget to pick up a set of traditional double-nine dominoes, domino stands, and a domino table (there are cubilete and Spanish playing cards too); when you're not using the table for games, you can display a few antique yearbooks from pre-Castro high schools, purchased from Sentir Cubano's huge collection. Buy a framed display of old-fashioned currency to hang on the wall, plaster your car with stickers, and put some Fidel Castro toilet paper in the bathroom. If that isn't enough, check out owners Miguel and Maria Vazquez's first store, online at www.cubanfoodmarket.com.

Miami needs more guns. Simply put, the police are overburdened and understaffed, and it's clearly time for private citizens to take matters into their own hands. No one's calling for armed insurrection yet, just more "deterrence." Imagine the message you could have sent to that bitch in the SUV who almost ran you off the road without looking up from her Blackberry if you'd been wielding a .357 instead of your middle finger! With that in mind, it's worth noting that Ace's has won this award before, and for good reason. This is simply, beyond question, the Glock-totinest, cap-bustinest, armor-piercinest heater haven in Miami. The victorious smell of Cordite hangs in the air as soon as you enter Ace's, and you can hear the shots coming from the indoor range (rent a gun for $20 and pay $9 per hour for target practice); it's a reveille for all of those who are bad-ass enough to heed the literal call to arms. Ace's carries everything from purse-size pistols to massive Magnums. And the ambience is perfect: from the poster of kittens frolicking with handguns hanging over the gun safe, to the folks just in from the range comparing paper targets, to the happy chatter ("Now this round will go through two, maybe three people before stopping...."), Ace's is the place to get your gat and go forth -- for Justice!

"There used to be dive shops all over the place," says Judy Miller. "Now we're the only one in the area." As the owners of Divers Den Miami, Judy and her husband Jim have been running this one-stop shop for undersea fun since 1977. Experienced divers can rent or buy any equipment they need in this place, which is neatly tucked away in the Shops of Kendall strip mall. Uzzi gear? Check. Mares goggles? There are many pairs, ranging from $60 to $79. A Currents snorkel vest for $49.95? Snap it all up here. And wannabe divers can obtain scuba certification through the store, which staffs two instructors (one of whom is also a trainer of dive instructors, and a University of Miami professor). Dive training sessions are scheduled first in area pools and then with charter groups in the shallow reefs of the northern Florida Keys, and the review course costs just $150. But the best reason to stop by Divers Den is for friendly conversation with the Millers and to meet the store mascot, a galloping galoot of a chocolate lab named DuPont, who plops his furry paws atop the counter as though he's ready to ring up your purchase.

Ohh yeah! Feeeel the burnnnn! Ahh! Ahh! Oh I can barely lift my arm 'cause I did so many! I did over a thousand! Now look at my guns! Look at that cannonball bicep! Don't you just want to squeeze it? Oh yeah! Look, I can even flex my eyelid muscle! And I work this perfect buff bod at MPower's new location! It's a gleaming monolith to fitness! It's Globo Gym XXX-Large! An annual $469 membership gets you unlimited aerobic and yoga classes, supervised childcare, and free parking. For an additional $30 a month, you receive unlimited spinning classes. MPower also offers short-term plans such as an $80 one-month membership or $270 for six months. And for those of you who aren't complete without your faux tan, MPower offers the latest skin-baking technology. Tanning packages range from $12 to $160.

The smoky-sweet scent of tobacco permeates the air at the El Crédito Cigar Factory. It's an aroma that Ernesto Perez-Carillo Jr. has breathed all of his life. As a young boy in Cuba, he toured his father's tobacco farms. The family's factory was among the island's finest. But the clan moved the business to Miami after Fidel Castro's 1959 revolution and now the business Perez-Carillo Sr. began on the island in 1948 continues under the strong, capable leadership of his son. To honor his father's memory, Ernesto has outfitted the factory with mahogany humidors, rolling tables, and cabinets in the old Havana style. "Times have changed, but we try to keep the atmosphere that my father had in his factory," Perez-Carillo Jr. says. This little place on Calle Ocho has earned an international reputation. The four brands that the factory turns out -- La Gloria Cubana, La Hoja Selecta, El Rico Habano, and Dos Gonzales -- each has a distinctive flavor and shape. Employees are encouraged to experiment with the tobacco, to marry complex essences and aromas from Ecuador, North America, and the Dominican Republic in order to create a unique blend. La Gloria Cubana cigars are considered among the nation's best, ranging in price from $1.15 for the panetelas to $2.65 for the fat, pyramid-shape piramides. Cigar aficionados including Robert Goulet, Bill Cosby, and (ahem) Bill Clinton have visited the factory to watch the proud Cuban workers sing traditional songs while twisting stogies fit for royalty. Whether you're a tobacco addict, a curious newbie, or a connoisseur, you can stop by the adjacent retail outlet to buy a cigar, or call to schedule a tour and watch expert roleros from the motherland practice a longstanding island art form.

Ordinarily the process of buying two-by-fours, screwdrivers, hammers, and dry wall is far from heartwarming. But purchasing a nail gun at Shell is strangely therapeutic. There's the great service -- almost everyone seems to be of Bob Vila quality; you can find an expert on mahogany, bathroom fixtures, and security systems. There's also the setting. Shell is stuffed like your grandmother's attic. If you buy an obscure item -- a rare screw, perhaps -- there's a chance some staffer will clamber up a ladder to pull it from a mysterious, unreachable place twenty feet high. But the reason we like Shell better than the entirely serviceable Home Depots of the world is not the service. Nor is it the setting, the presence of two million lineal feet and 330 types of molding, or the claims that it sells more stainless-steel fasteners than anyone in the industry. No, that's not it. It's not even Shell's seniority (it has been in Miami since 1928). We like this store because of its friendly details. The free coffee, free popcorn, free Gatorade, and the courtesy phone. Even if you're not a contractor, you'll have a good time at Shell. 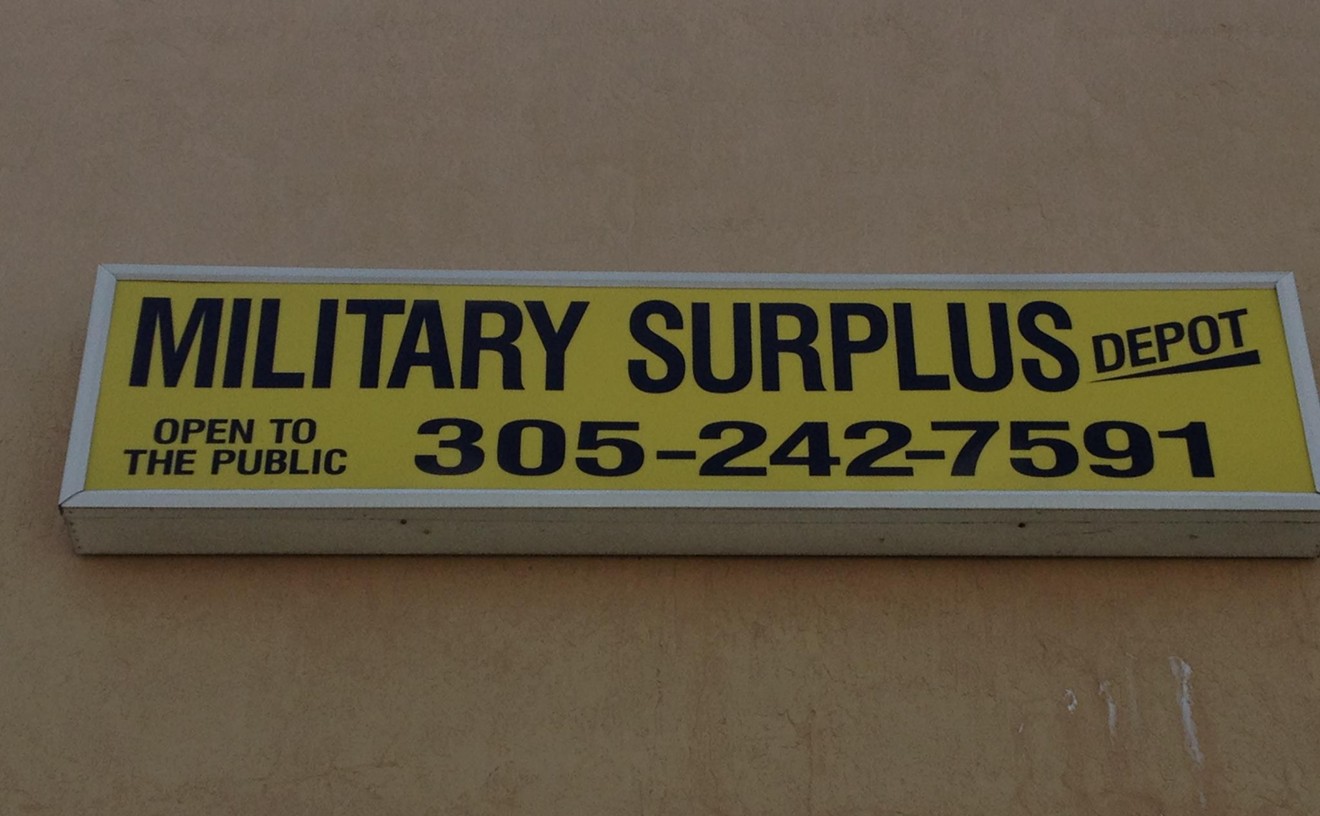 Don't be spooked by the apparently armless camouflage-clad child mannequin that greets you outside. This shop on a busy stretch of South Dixie Highway has everything you'll need to hole up in a survivalist bunker during your next paranoid delusion about a United Nations invasion of South Florida. Of course, you have your pick of combat boots, camo, and personalized dog tags, but there's plenty of other intriguing stuff too. How about taking home an Israeli gas mask, a chest pack for your ammo clips, or a field guide to the M-60 machine gun? Why not try on a head-to-toe suit that makes you look like a deadly lump of weeds? Or maybe you could pick up some World War II replica insignia patches, a stun gun, or just a good old "Insured by Colt" bumper sticker. Get here before the UN does. Quartermaster Sales is open Monday through Saturday from 9:00 am. to 7:00 p.m. and Sunday from 10:00 a.m. to 4:00 p.m.

Tucked away in a little strip mall, Judaica Enterprises has pretty much everything you'd expect -- bins full of kippoh, educational Jewish children's games, menorahs of all varieties, and shofars of various lengths. What sets Judaica Enterprises apart is its extensive stock of Jewish texts -- more than 7000 titles, according to owner Joseph Bronstein. In the store and its nearby warehouse, you'll find books about Jewish cooking, Hebrew-language instruction, humor, Jewish history, marriage and relationships, Jewish travel, and a solid selection of Spanish-language Judaica. Bronstein and his staff will go out of their way to help you find what you're looking for. "People who work here are usually knowledgeable," Bronstein says with a sly smile. If you don't want to schlep out of your way, they'll ship your order to you. Judaica Enterprises is open Sunday through Thursda

It's Saturday night, and you want to get wasted. Not just giggling, slurring-your-words wasted -- your mission is to become intoxicated past the point of being in control of your bodily functions. Well, then King Liquors has what you need. Walk past the seemingly endless wine racks, which are laden with an incredible assortment of wine, champagne, and sake. Pass the wall of schnapps and curaçaos. Ignore the Johnny Walkers, which come in red, gold, green, and blue. Don't waste your time with the multihue cognac-laced beverages, the Alize, Envy, Hypnotiq, Destinee, and X-Rated liqueurs. You're looking for something different tonight. Something that looks like trouble. And there it is, sandwiched between Dooley's Toffee Liqueur and Jägermeister. Absente, Absinthe Refined. The real stuff has been illegal in America since 1912, but this dazzling, emerald green French import is distilled with Southern wormwood and still packs a 110-proof wallop. A mere $43.99 for a taste of la fée verte and the glamour of belle époque Paris sounds like a bargain. Quick, stock up on minibottles and a few six packs of beer for your less courageous buddies. Next stop is the nearest convenience store to score some sugar cubes.