Not a Dolphins Fan? Here's Where to Cheer for Your Favorite NFL Team in South Florida 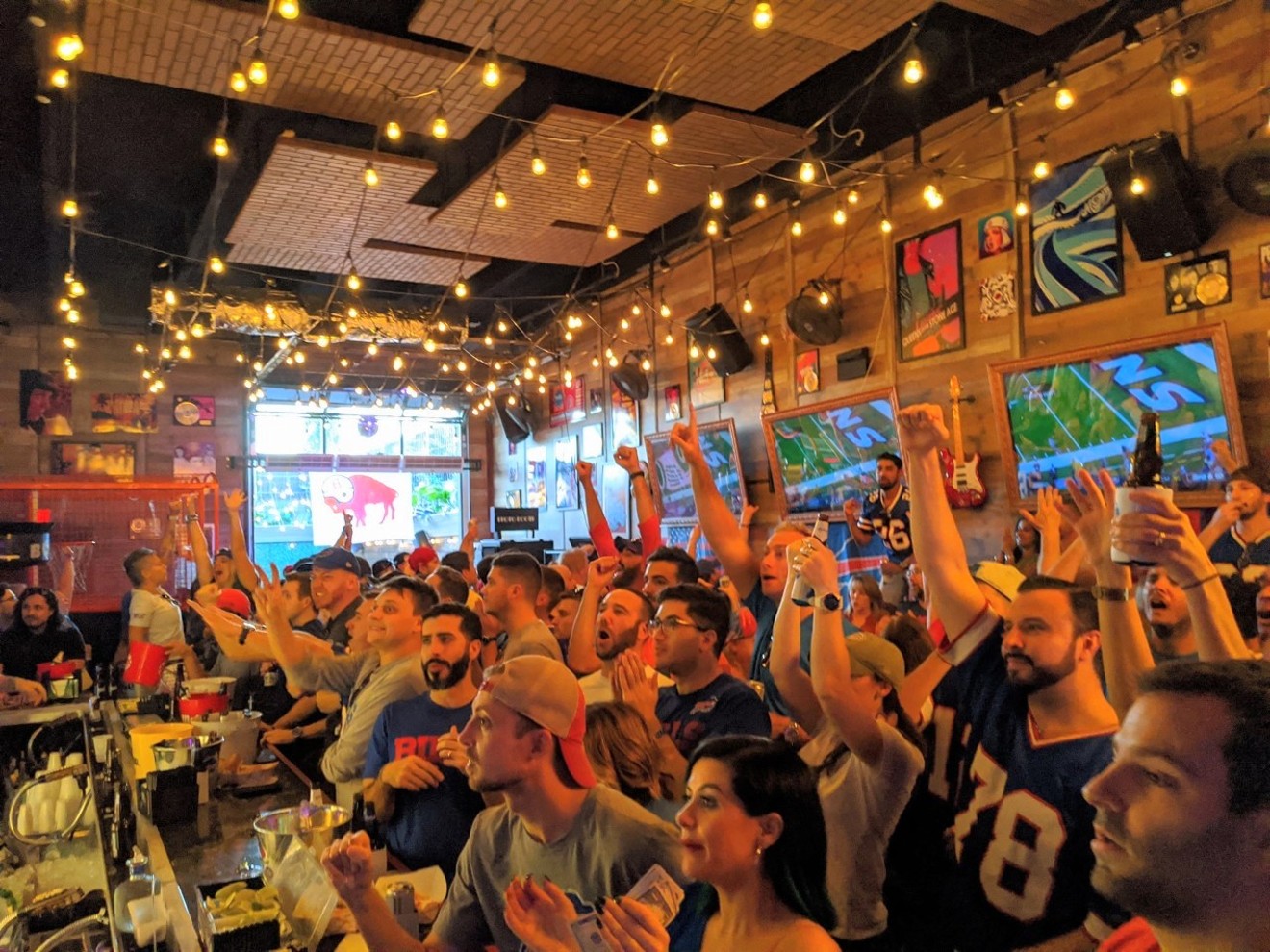 Buffalo Bills fans flock to Booze Garden on game day. Photo by Jonathan Holler
Let's face it: Not every football fan in South Florida wants to spend their Sundays watching the Dolphins play. Some fans are transplants who would prefer to see their old hometown team in action. Others are disillusioned Dolphins fans who are tired of witnessing the Fins go 20 years without a playoff win and are more invested in their fantasy teams.

For those who pledge their allegiance to other teams, New Times presents this list of South Florida sports bars that cater to NFL fanbases other than Dolphins devotees. These are the hangouts that give TV and sound priority to other NFL teams and provide a home away from home for many football fans living in South Florida.

You know how hardcore Bills Mafia can get. You’ve seen the videos of Bills fans crashing through tables while tailgating. So you probably won’t be surprised to hear that the Bills watch parties at Booze Garden's locations in Fort Lauderdale and Wynwood draw diehard crowds. It helps that Booze Garden serves Labatt Blue and Labatt Blue Light on game days, for that authentic Buffalo feel. Just don’t expect to see as many broken tables as you would outside Highmark Stadium. Booze Garden, 111-A SW Second Ave., Fort Lauderdale, 754-800-1441; and 299 NW 23rd St., Miami, 754-800-1441.

Bears starting quarterbacks come and go, often with alarming frequency, but Hot Leggz’s loyalty to the team does not. Da Bears have received priority treatment at the Fort Lauderdale pub since it opened in 2011, thanks to the fact that both owners have Chicago ties. Those ties also explain why you’ll find Chicago hot dogs, Italian beef, and Italian sausage on the menu alongside gator bites, snow crab, and Florida key lime pie. Hott Leggz, 2471 E. Commercial Blvd., Fort Lauderdale; 954-771-5151; hottleggz.com.

Once the laughingstock of the NFL, the Browns now appear, as Baker Mayfield would say, dangerous. But can they contend for the Super Bowl? The brown-and-orange-clad fans who regularly occupy the Brass Tap in Fort Lauderdale on Sundays sure hope so. They basically called dibs on the Brass Tap by contacting its owner when the place was under construction and asking if they could host events there. In an effort to cater to these Cleveland natives, the bar's game-day menu includes bratwurst, Polish Boys and Roman Burgers. The Brass Tap, 551 N. Federal Hwy., Suite 600, Fort Lauderdale; 754-200-8648; brasstapbeerbar.com. 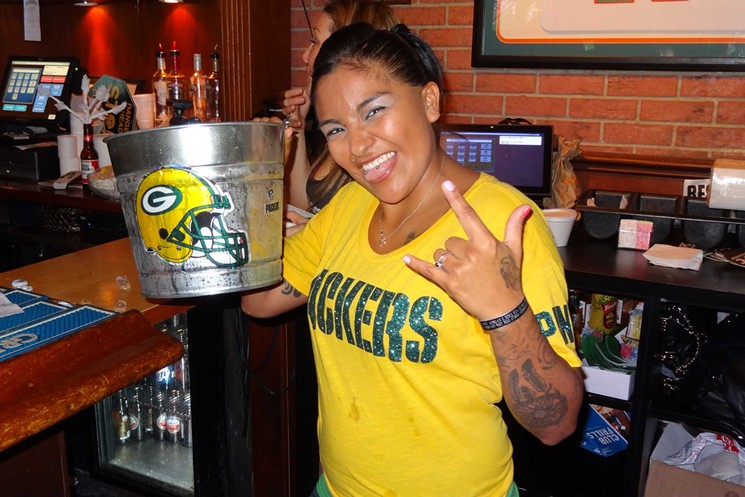 Where your foam cheesehead at Slackers Bar & Grill.
Photo by Jon Slack

Wear your foam cheesehead with pride on Packers game days at Slackers Bar & Grill. The Fort Lauderdale hangout is heavy on Pack décor, including framed photos of legends such as Vince Lombardi, Brett Favre, and Aaron Rodgers hanging on the walls. The menu offers Green Bay-friendly foods such as beer brats and cheese curds. If the thought of Rodgers leaving the Packers next year doesn’t give Green Bay fan a heart attack, the "Wisconsin Brat Burger" will. This calorie bomb is topped with brats, bacon, sauerkraut, cheddar, and beer-infused mustard. Slackers Bar & Grill, 995 Marina Mile Blvd., Fort Lauderdale; 954-530-4758; slackersbarandgrill.com.

We can't leave the Pats off this list (no matter how badly we want to). The six-time Super Bowl champs have a decent following in South Florida, and some of them head to Kelly's Landing to cheer on Bill Belichick and company. New England transplants will feel right at home with a menu that includes Boston cream pie, Fenway franks, lobster rolls, Rhode Island clam cakes, and clam chowder — sorry, chowdah. Kelly's Landing, 1305 SE 17th St., Fort Lauderdale; 954-760-7009; kellyslanding.com.

Shuck-N-Dive Cajun Cafe offers patrons what it calls "a true New Orleans experience." You can see it in the menu — which includes gumbo, crawfish, and po'boy sandwiches — and on Saints' game days, when Shuck-N-Dive pumps the same music played at the Caesars Superdome and reserves a private room strictly for Who Dat Nation. Let the good times roll with buckets of Louisiana's own Abita or a hurricane with Bayou Rum. Shuck-N-Dive, 650 N. Federal Hwy., Fort Lauderdale; 954-462-0088; shuck-n-dive.com. 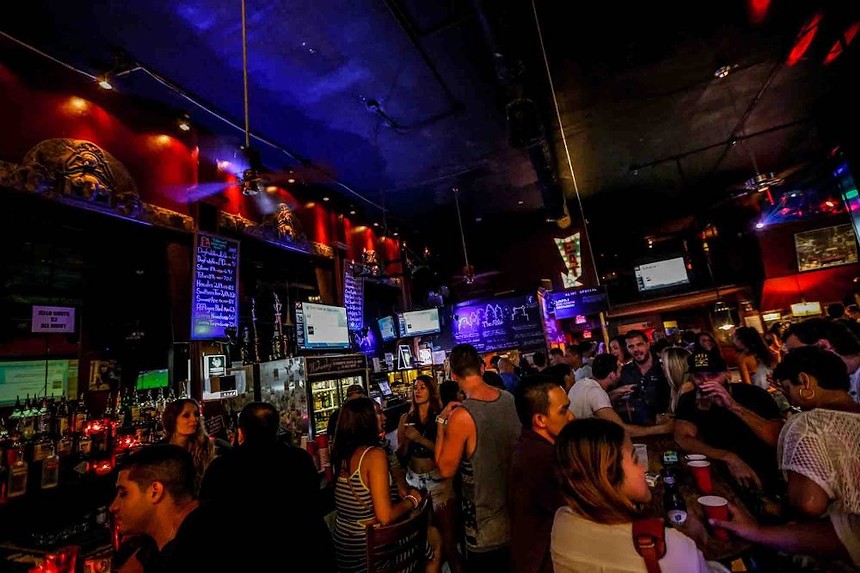 Located inside SpareZ Bowling Center in Davie, HammerJacks will once again be the bar of choice this season for many fans of the “J-E-T-S! JETS! JETS! JETS!” It’s a no-frills watch party for fans of what has been a no-frills team, to put it one way, but all you really need are passionate fans, a few screens, and some beer for an enjoyable viewing experience. Sure, a bunch of wins would be helpful, but this is the Jets we’re talking about. HammerJacks, inside SpareZ Bowling Center, 5325 S. University Dr., Davie; 954-434-9663; sparezbowling.com/hammerjacks.

"Fly, Eagles, Fly" isn't meant to be sung alone. On game day, head to Lost Weekend and belt out the fight song with fellow Eagles fans. Yes, you can order a South Philly cheesesteak, with Amoroso's bread and all, at the Miami Beach dive bar. One of the perks of watching football at Lost Weekend is you can play a game of pool or foosball at halftime. Lost Weekend, 218 Española Way, Miami Beach; 305-672-1707; lostweekendmiami.com.

Bring your Terrible Towels to Billy’s Tavern or buy them when you get there; either way, Billy's is the place to cheer on the Black and Gold on game days. Also available at the Davie bar: homemade pierogi, Iron City Beer, a Polamalu pizza named after hirsute Steelers legend Troy Polamalu, and, as is mandatory for every Steelers bar, a burger named after Ben Roethlisberger. Reservations for Steelers watch parties are recommended. Billy's Tavern, 8580 W. State Rd. 84, Davie; 954-475-9464; billystaverndavie.com.
KEEP MIAMI NEW TIMES FREE... Since we started Miami New Times, it has been defined as the free, independent voice of Miami, and we'd like to keep it that way. With local media under siege, it's more important than ever for us to rally support behind funding our local journalism. You can help by participating in our "I Support" program, allowing us to keep offering readers access to our incisive coverage of local news, food and culture with no paywalls.
Make a one-time donation today for as little as $1.