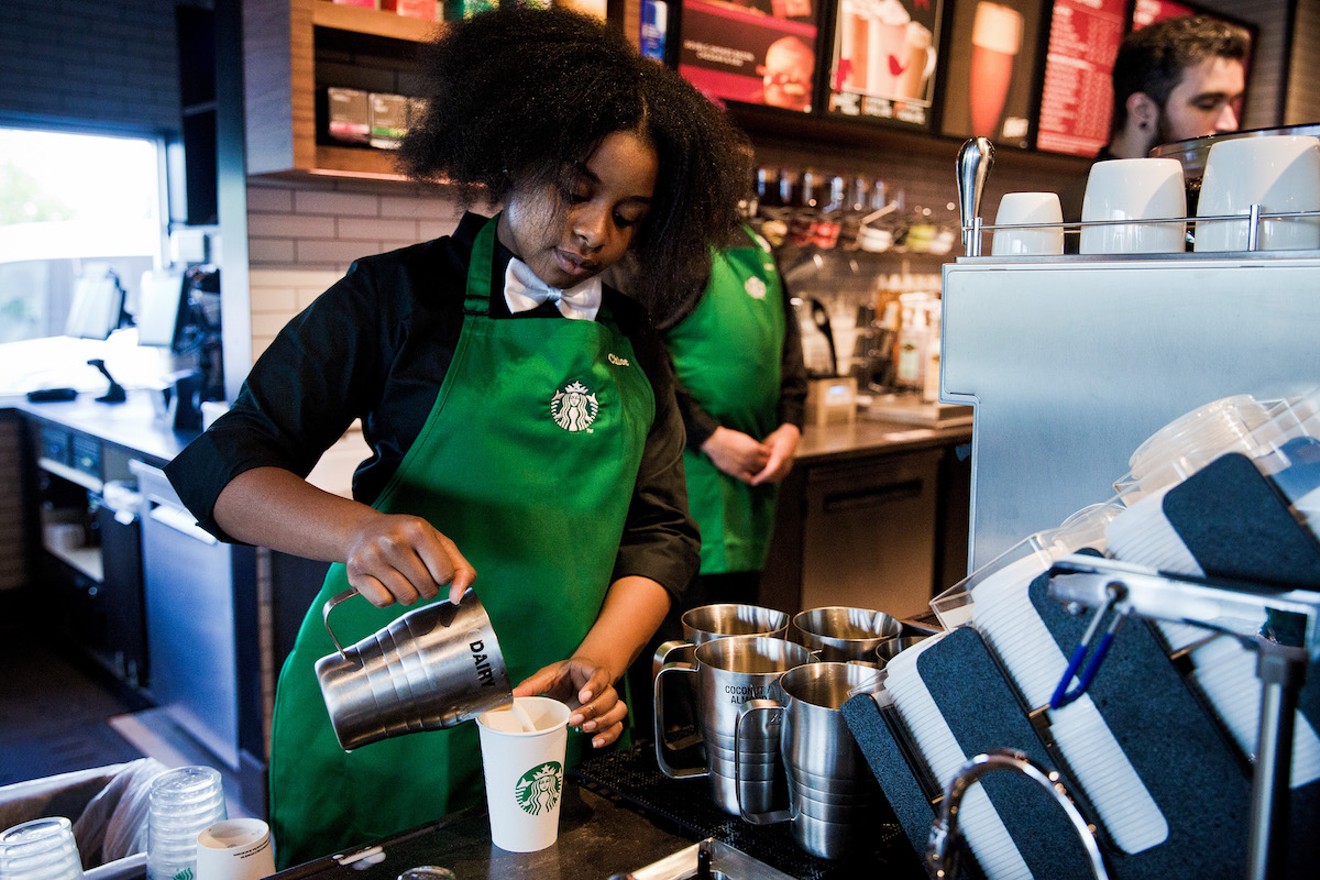 Starbucks' Miami Gardens store. Courtesy of Starbucks
Starbucks will close more than 8,000 company-owned stores Tuesday, May 29, for racial-bias education. Nearly 175,000 employees will attend the mandatory session. The training will become a required part of the company's new-hire process.

The closure will affect the more than 50 Starbucks locations in Miami-Dade.

You'll still be able to get your morning java at most locations because training will occur in the afternoon. "While exact timing may vary from store to store, customers should expect stores to close beginning at 2 p.m. local time," a Starbucks representative tells New Times.

All company-owned Starbucks stores and corporate offices will be closed Tuesday afternoon. During that time, employees will undergo training designed to "address implicit bias, promote conscious inclusion, prevent discrimination, and ensure everyone inside a Starbucks store feels safe and welcome."

The program was developed with the help of several experts on racial bias, including Bryan Stevenson, founder and executive director of the Equal Justice Initiative; Sherrilyn Ifill, president and director-counsel of the NAACP Legal Defense and Education Fund; Heather McGhee, president of Demos; former U.S. Attorney General Eric Holder; and Jonathan Greenblatt, CEO of the Anti-Defamation League.

The training comes as a response to the April 12 arrest of Donte Robinson and Rashon Nelson at a Philadelphia Starbucks. Employees called police on the two men, who were simply sitting in the coffee shop. Customers recorded the incident, and the videos went viral, garnering more than eight million views on Twitter, according to the New York Times. The men were released without being charged, but the damage was already done: The hashtag #BoycottStarbucks began trending. Starbucks CEO Kevin Johnson issued a video apology and published a statement on Starbucks' website:


“I’ve spent the last few days in Philadelphia with my leadership team listening to the community, learning what we did wrong and the steps we need to take to fix it. While this is not limited to Starbucks, we’re committed to being a part of the solution. Closing our stores for racial bias training is just one step in a journey that requires dedication from every level of our company and partnerships in our local communities.”

On May 2, Starbucks released a statement noting its CEO had reached an agreement with Robinson and Nelson that included "a financial settlement as well as continued listening and dialogue between the parties and specific action and opportunity."
KEEP MIAMI NEW TIMES FREE... Since we started Miami New Times, it has been defined as the free, independent voice of Miami, and we'd like to keep it that way. With local media under siege, it's more important than ever for us to rally support behind funding our local journalism. You can help by participating in our "I Support" program, allowing us to keep offering readers access to our incisive coverage of local news, food and culture with no paywalls.
Make a one-time donation today for as little as $1.