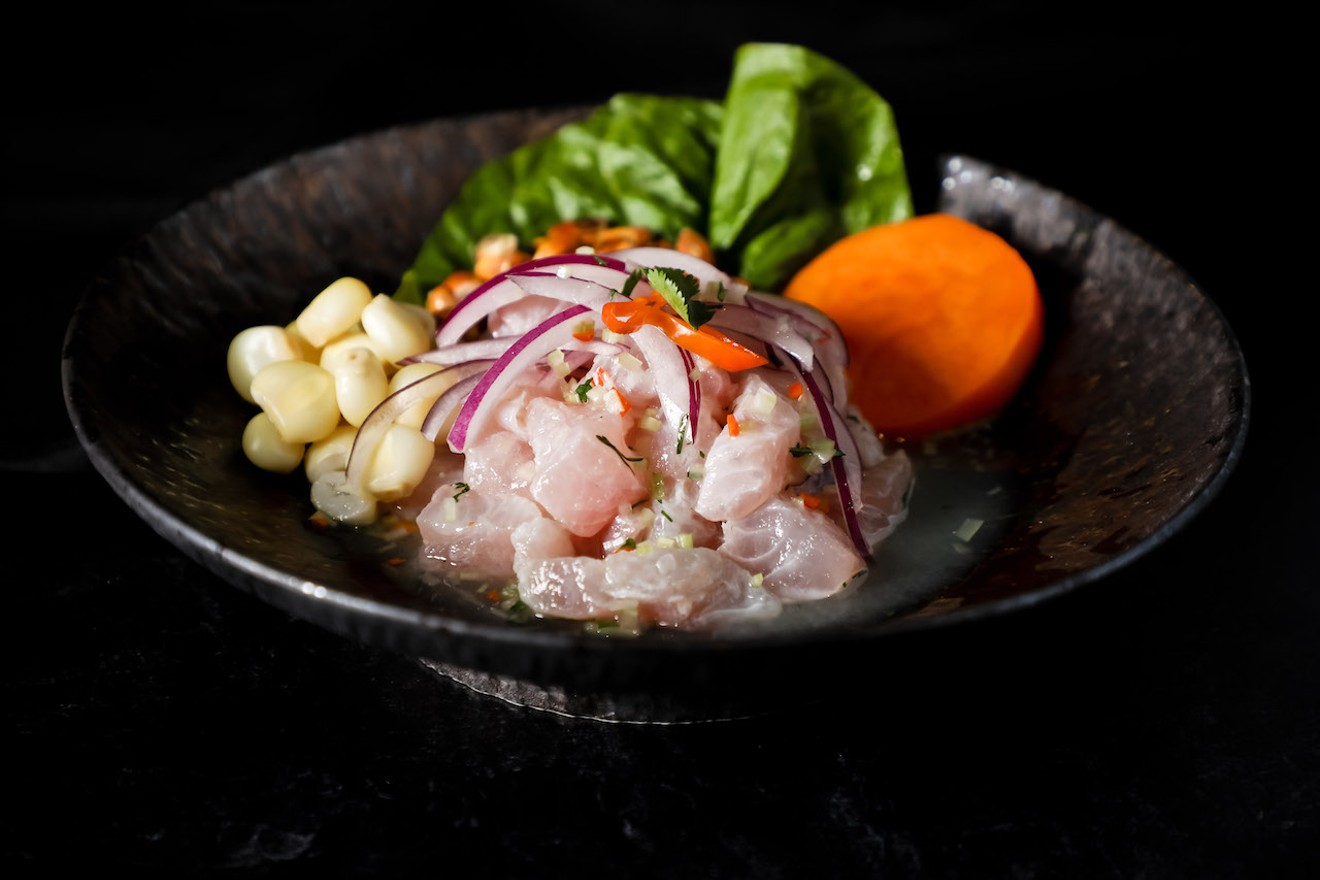 A ceviche plate at Okami. Photo courtesy of Okami
The Design District has a new, Nikkei-themed restaurant. Okami, a collaboration three years in the making between Cuban-American actor William Levy and Venezuelan restaurateur Pedro Orihuela, began service on February 15 at 156 NE 41st St., adjacent to the Prada boutique.

Orihuela explains that he and Levy met in 2017 and realized they shared a vision for a members-only restaurant and lounge. The duo initially focused their search for a location in the Brickell neighborhood but shifted gears when Emilio Estefan, a friend of Levy's, told them about the 4,000-square-foot space that was available in the Design District.

"There wasn't that much in the Design District back then and we agreed that the area had all the potential to become a new hot spot, " Orihuela tells New Times. "But we stumbled into many challenges, including figuring out how to adapt the space into our vision, obtaining permits, and the outbreak of the pandemic."

In the run-up to Okami’s opening, Orihuela and Levy teamed up on Level Twenty-Nine, a Pembroke Pines restaurant that Orihuela says offers a more "homemade take" on Nikkei cuisine. (Pronounced nee-kay, the term is used to define the culinary blend of Old and New World techniques and flavors created by Japanese workers who migrated to Peru in the late 19th century.)

Last month, Okami opened its doors to the public, joining a roster of Miami Nikkei restaurants that includes Osaka Nikkei and La Mar by Gastón Acurio.

"The pandemic forced us to adapt the original plan, but the end result is better than we expected," Orihuela says. "Peruvian ingredients are very different from what is locally available, and we worked carefully to design and redesign a Nikkei menu that would also target local preferences.”

An assortment of dishes at Okami.
Photo courtesy of Okami
A stylish 170-seater designed by Francois Frossard, Okami (the name comes from the Japanese word for wolf) is finished in natural stone, granite, and crystal. In the dining room, a sushi bar faces the kitchen. A second-level lounge for private events is accessed via a staircase guarded by an eye-catching brass wolf sculpture. The airy room boasts a black granite bar, chandeliers constructed with strands of crystal chain designed to look like floating jellyfish, and panoramic floor-to-ceiling windows. A private balcony overlooks the restaurant's outdoor seating and a courtyard.

Orihuela and Levy tapped a team of four chefs, headed by Hajime Kasuga, a third-generation Peruvian of Japanese descent who has also helmed restaurants in Indonesia. Together they bring the flavors they grew up with in appetizers such as seared tuna tataki tossed with basil, cilantro, ponzu jelly and daikon aji amarillo ($18), and inventive ten-piece sushi rolls like an acebichado maki packed with fried shrimp, tuna, avocado, and chicharrón (fried pork rind) served with a ceviche dipping sauce ($18).

Orihuela, who's also been running Casa España in Pembroke Pines for the past five years, says he aims to adapt Okami's menu to reflect more of Miami's Latin-American culinary personality. Upcoming offerings will include his own version of arrroz con mariscos, a brothy rice dish. “It will be our Miami adaptation of the classic Peruvian favorite,” he says.

The beverage menu includes sake, wine, and signature cocktails such as a pink pisco sour ($18) and a passionfruit martini ($18).

Okami. 156 NE 41st  St., Miami; 786-801-1969; okami-miami.com. Open Sunday through Thursday from noon to 10 p.m.; Friday and Saturday from noon to 11 p.m.
KEEP MIAMI NEW TIMES FREE... Since we started Miami New Times, it has been defined as the free, independent voice of Miami, and we'd like to keep it that way. With local media under siege, it's more important than ever for us to rally support behind funding our local journalism. You can help by participating in our "I Support" program, allowing us to keep offering readers access to our incisive coverage of local news, food and culture with no paywalls.
Make a one-time donation today for as little as $1.
Juliana Accioly
Contact: Juliana Accioly