Who is Miami Mayor Francis Suarez taking out for Valentine's Day this year? Photo by Michael Campina. Illustration by Joshua Ceballos
It's Valentine's Day weekend, and while some folks have either broken up during quarantine or struggled to find love in a socially distanced world, at least one high-profile Miamian has had some obvious romance this year: City of Miami Mayor Francis Suarez.

Over the past several months, Suarez has had a steamy public dalliance over Twitter for all of Miami's residents to see. The mayor and his paramours have been exchanging cute messages and compliments since November, and Suarez has done everything in his power to convince the objects of his affection to make the trip to Florida so they can finally be together in person.

The apples of Suarez's eye are tech bros — venture capitalists and technology company CEOs from the West Coast who have been eyeing Miami as the new spot to expand their tech empires and colonize "remediate" the local culture.

Suarez has been buttering up the tech industry in an attempt to woo a fleet of entrepreneurs to make Miami a new Silicon Valley in as unabashedly flirtatious a manner as possible, complete with a seriously cringe-inducing overuse of emojis.

Amazing as it may seem, the public courting appears to have worked — a number of tech CEOs are making the move to the Magic City in the wake of Suarez's peacocking.

In celebration of this budding romance and the holiday of love, we've come up with a list of possible date ideas for Mayor Suarez and his West Coast crushes. (Feel free to use some of these yourselves, if you're into that sort of thing.)

Tesla CEO Elon Musk wants to build a tunnel underneath Miami.
Photo by Steve Jurvetson/Flickr
A drive through Elon Musk's tunnel of love. Ah, the tunnel of love: a passionate staple of old date nights in corny sitcoms and rom-coms. But you know what would make it even more steamy? If it ran underneath Miami's busiest roadways and was filled with Teslas.

That's the dream Tesla CEO Elon Musk proposed to Suarez as a means to alleviate gridlock: an underground tunnel built by Musk and only accessible by electric vehicles like Musk's own Teslas. Because nothing says romance like double-dipping into the honey pot.

If Musk's tunnel ever comes to fruition, it would make a perfect date spot for Suarez and the tech bros coming to Miami in their pricey, battery-powered love machines. They could all pack in and drive blissfully away from the normies who can only afford regular cars, providing themselves with complete privacy, since only a fraction of residents would even have access to the tunnel. While the rest of the city's drivers are just trying to get across the Brickell bridge, the lovebirds can enjoy playing Cyberpunk 2077 inside the Tesla Model S sedan. 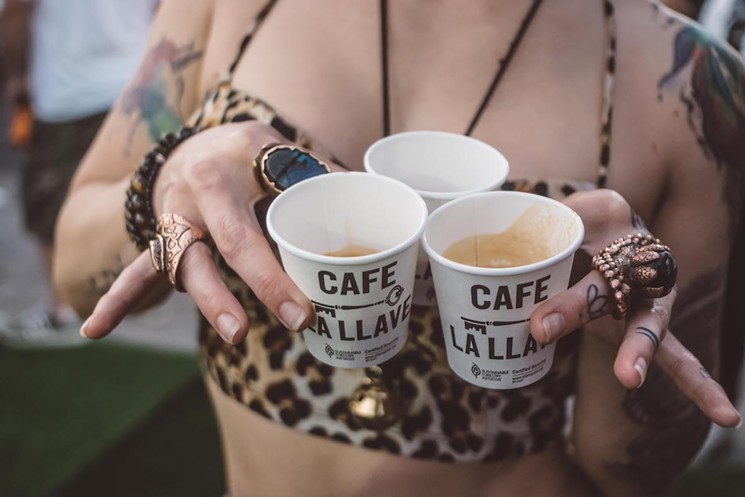 Who wants a cafecito?
Photo courtesy of JLPR
Coffee date at Vicky Bakery. When your long-distance lover finally comes to visit, it's important to give them a taste of your hometown. Mix that sentiment with the subdued tenderness of a coffee date, and that makes Vicky Bakery one of the best spots for Suarez and the tech bros to get to know one another better.

Suarez already got the ball rolling with his "cafecito tech talks," a video series on his Instagram account wherein he hosts tech leaders and businesspeople, like Celtics owner Jim Pallota, to discuss Miami's commercial future. He's been eager to get tech guys and gals to sit down for coffee with him for months, so this date spot seems like a no-brainer.

While they sip cafecitos and the tech bros start going off about how Starbucks was actually founded in Seattle so the coffee there is actually way better than the chain stores, they can daydream about which parts of the city to gentrify with even more artisan coffee shops. "Pepper" the robot
Photo by Joshua Ceballos
A romantic stroll through Brickell. With all the stationary date spots on this list, it's time for a more energetic rendezvous. Mayor Suarez is a pretty active guy and a big fan of CrossFit, so perhaps a romantic walk/jog through Brickell could liven things up on his Valentine adventure.

Brickell makes for a great meeting place for the star-crossed Valentines, with its ostentatious highrises, disinfected aesthetic, and uppity attitude — perfect for reminding the West Coasters of home! Its status as Miami's financial district also makes it perfect for venture capitalists looking to park their ludicrous amounts of cash and invest in meme stocks.

After a stroll along the Miami River, an outdoor cycling class, and perhaps some shopping at the Brickell City Center, Suarez can surprise the Silicon Valley transplants with a stop they're sure to like: a visit to Pepper, the humanoid robot at HSBC Bank that talks and poses for selfies.

A glimpse at a possible robotic workforce for the tech bros to exploit, rather than one made up of local residents, would surely be a thoughtful gift, and perhaps Suarez and his dates can convince some Brickell bankers to set up a cryptocurrency exchange.

Photo courtesy of Disney
Disney+ and chill. No good date is complete without a movie night to snuggle up and reflect on a day full of fun experiences.

What movies might be appropriate for a limelight-loving Miami mayor and a group of tech aficionados and entrepreneurs, you might ask? First on the bill would have to be Iron Man 3 on Disney+. Nothing gets a tech bro going more than the idea of Marvel's "genius, billionaire, playboy, philanthropist." Many of them would love to be the real-world Tony Stark, complete with riches and an impenetrable metal suit to protect them from attacks from folks who can no longer afford to pay rent now that they've driven up property prices.

The third Iron Man particularly lends itself to bonding, since Suarez can boast about how that part of the movie was filmed at Vizcaya. Talk about the best of both worlds!

If the date has to go on just a little longer, next up could be the classic tech CEO origin story: The Social Network. The entrepreneurs can muse about being the next Mark Zuckerberg after their new "Uber, but for _____" app takes off, and Suarez can coo about how the University of Miami could be the next Harvard.
KEEP MIAMI NEW TIMES FREE... Since we started Miami New Times, it has been defined as the free, independent voice of Miami, and we'd like to keep it that way. With local media under siege, it's more important than ever for us to rally support behind funding our local journalism. You can help by participating in our "I Support" program, allowing us to keep offering readers access to our incisive coverage of local news, food and culture with no paywalls.
Make a one-time donation today for as little as $1.