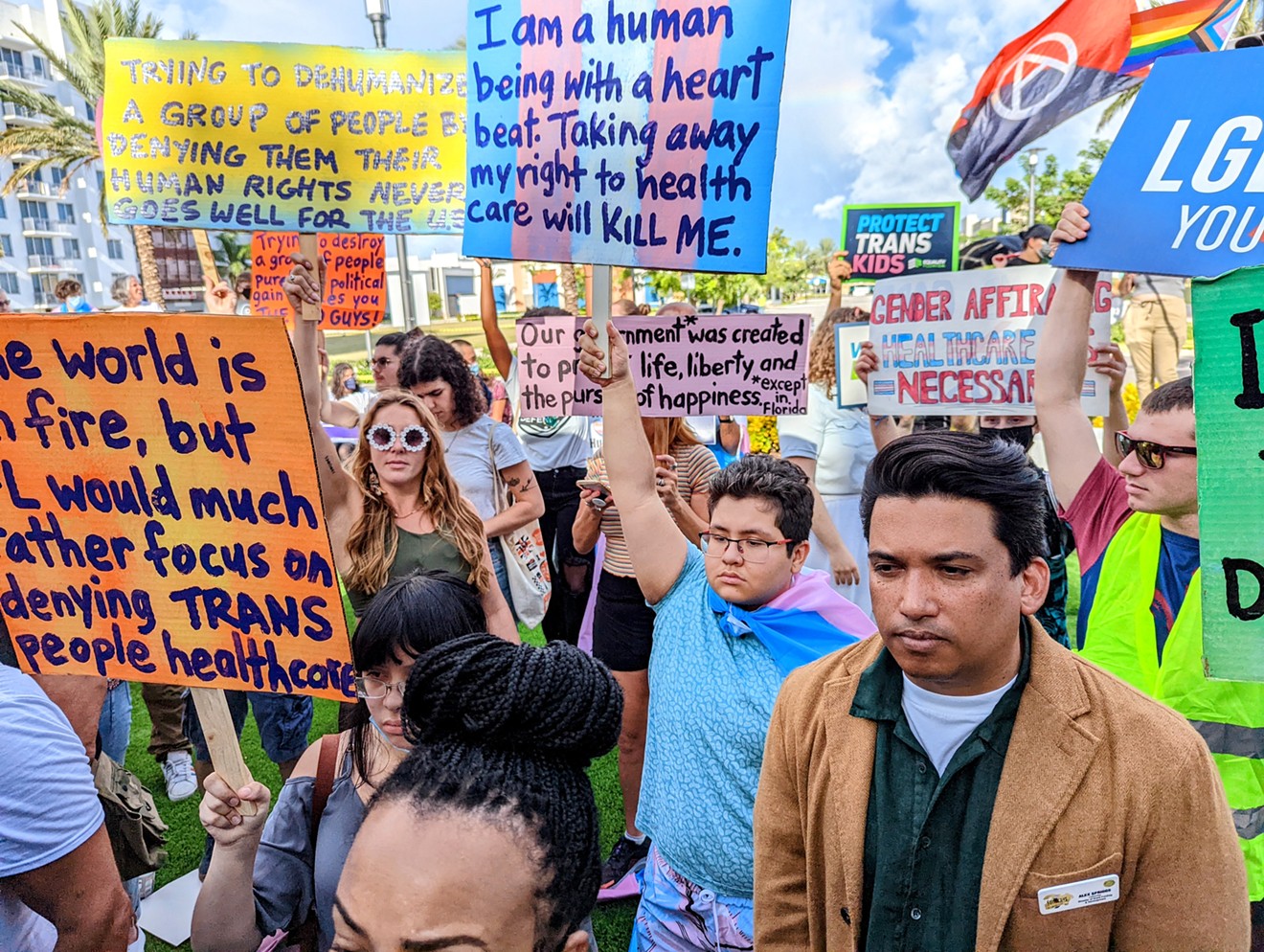 Protesters gather outside the Marriott Fort Lauderdale Airport hotel where the Florida Board of Medicine held a meeting on August 5, 2022, to consider proposed rules to ban gender-affirming medical care for minors. Photo by Transinclusive Group
On Friday, August 5, the Florida Board of Medicine conducted a public hearing in Dania Beach on the state's proposal to ban gender-affirming therapy for minors. After a morning of protests by transgender rights advocates and hours of heated public comment, the meeting ended with the governor-appointed board voting nearly unanimously in favor of moving forward to create statewide rules to regulate gender-affirming care.

Toward the end of the meeting, transgender attendees and their supporters shouted "shame!" at the board, and some wept. Nic Zantop, a trans activist, tells New Times that it was "dehumanizing to have to sit in spaces and have our existence debated."

"I don't think they'll stop. The goal is to dehumanize," says Zantop, who serves as deputy director of Transinclusive Group, a nonprofit advocacy organization based in Wilton Manors.

The proposal was presented to the board by the Florida Department of Health, which is attempting to ban gender-assignment surgery, puberty-blocking medication, and hormone therapy for minors. The board has not yet adopted that ban; its Friday decision triggers a rulemaking process that will determine what treatments ultimately will and will not be allowed for minors seeking gender-affirming care in the state.

Dr. Lydia Fein, a gender-affirming care provider in Miami, says the board's ruling is a blow to an already vulnerable community.

"I've had patients who have been waiting to start hormone replacement therapy, and now they're nervous to start it and have to stop. They're afraid of being used in this political way. It's having immediate effects on patients and their well-being," says Fein.

Fein encourages trans patients and those who intend to start hormone-replacement therapy to consult with their care provider in light of the board's decision.

Florida Surgeon General Joseph Ladapo, a 2021 appointee of Gov. Ron DeSantis, told the board on Friday that the long-term effects of hormone therapy and other gender-assignment treatments in adolescents are not fully known. In a June letter to the board, he asserted that "the current standards set by numerous professional organizations appear to follow a preferred political ideology instead of the highest level of generally accepted medical science."

Ladapo has based many of his talking points on a June 2 report by the Florida Agency for Health Care Administration, which deemed gender-affirming care to be "experimental," in contrast to consensus among multiple professional medical organizations. The agency is seeking to revoke Medicaid coverage for gender-affirming therapy for minors and adults alike.

Ladapo and the DeSantis administration have advised against social transitions for minors — a notable step beyond those taken by many others who have advocated against gender-affirming medical treatment in youth. Social transitioning includes nonmedical measures such as name changes or shifts in clothing to accommodate a person's gender identity.

Miami state senate candidate Janelle Perez tells New Times she worries about the potential for Florida to gut life-saving healthcare as a result of the state's stance on transgender medical treatment.

"During a time where we should be expanding access to healthcare, the state is instead stripping life-saving resources from children and families while using their power to target a vulnerable community. This is not freedom and it's shameful to see our state government become our children's first bully," Perez says.

The board meeting drew protests Friday morning by LGBTQ activists, who gathered outside the Marriott Fort Lauderdale Airport hotel, where the event was hosted. Transinclusive Group, Prism, Equality Florida, DSA, and Safe Schools South Florida were among the groups represented at the protest.

The groups say denying gender-affirming care will lead to increased incidences of depression, mental illness, and suicide among trans youth. Protesters covered themselves in makeshift body bags next to mock graves to draw attention to the message.

"There was a very positive tone in the morning. There was a feeling of unity and strength and that quickly turned [in the board meeting] to judgment and shame, disappointment and anger," says Safe Schools South Florida board member Franchesca D'Amore.

There were a handful of arrests at the event. According to eyewitnesses, two pro-trans individuals who arrived late were detained for trespassing. A third individual who was affiliated with the Florida International University chapter of Young Democratic Socialists of America (YDSA) was arrested after filming the scene on his Instagram live feed, a YDSA member tells New Times.

One woman advocating for transgender rights was forcibly removed from the meeting after she lashed out at the board at the end of the proceedings.

"You say you want to protect kids – then protect kids!" she yelled. "You don't put them in the streets."
KEEP MIAMI NEW TIMES FREE... Since we started Miami New Times, it has been defined as the free, independent voice of Miami, and we'd like to keep it that way. With local media under siege, it's more important than ever for us to rally support behind funding our local journalism. You can help by participating in our "I Support" program, allowing us to keep offering readers access to our incisive coverage of local news, food and culture with no paywalls.
Make a one-time donation today for as little as $1.