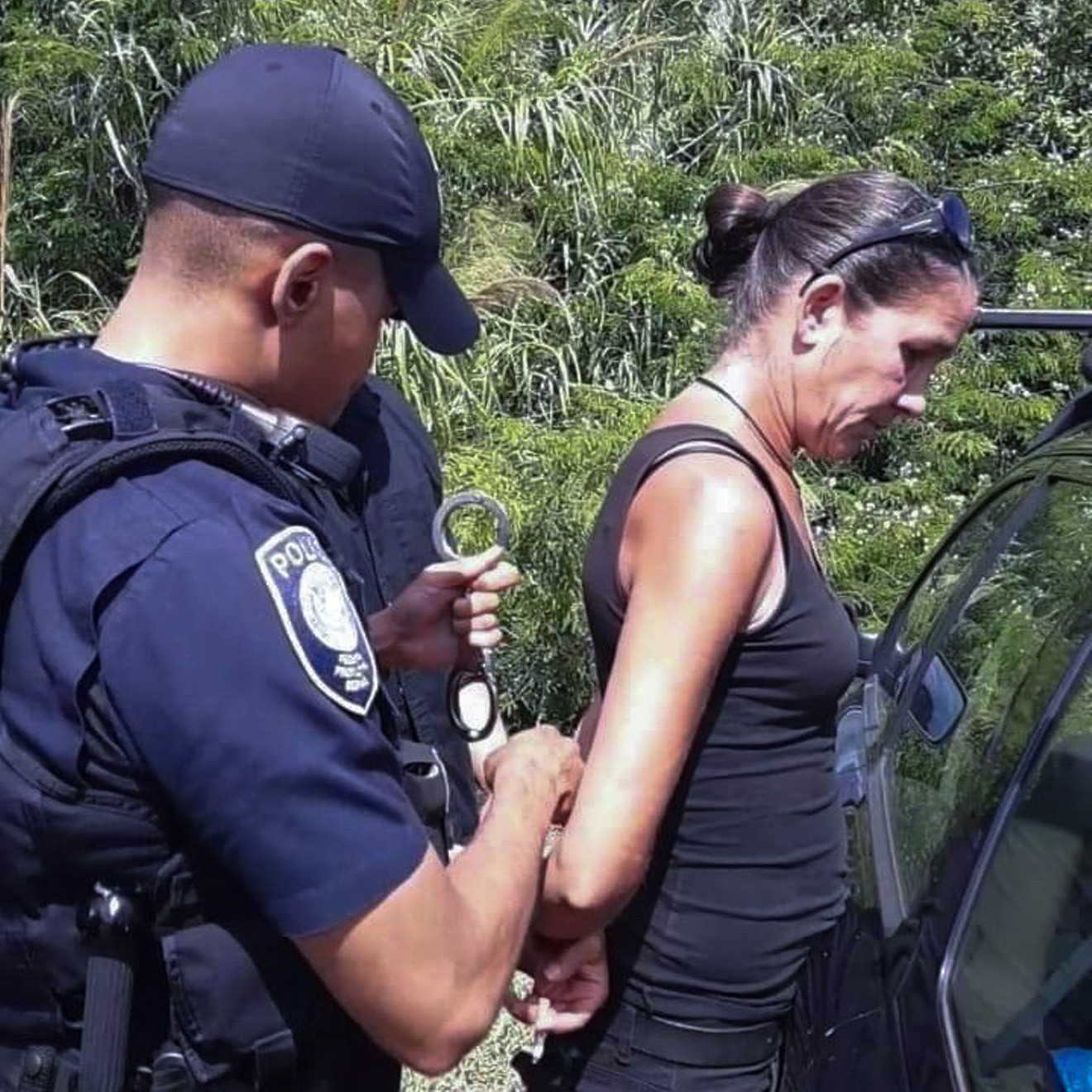 Courtesy of Alessandra Mondolfi
Alessandra Mondolfi was painting hearts on a poster board outside the Homestead child migrant camp last Friday when she spotted a pair of law enforcement officers walking toward her. An artist and activist who's part of a group of protesters maintaining a daily presence outside the facility, Mondolfi was working on a memorial to migrant children who have died in custody. "Here they come," one of the other activists said as the officers approached.

The two men — one in a Department of Homeland Security police uniform, the other in plainclothes — asked Mondolfi her name, then pushed her against a car and cuffed her, she says. They then allegedly put her in the back of a car and questioned her for about an hour, asking, bizarrely, whether she had aliases or a neck tattoo, and if she knew the names of the other protesters. Then, about an hour after first approaching Mondolfi, the officers let her go.

Days later, it's still unclear why she was detained. DHS did not respond to a request for comment. Mondolfi says the Miami-Dade Police Department and, weirdly, the Miami-Dade Schools Police, sent squad cars to the scene. The El Paso Police Department has a warrant out for Mondolfi's arrest over a protest she and other activists held at the U.S. Border Patrol Museum. But why would DHS be involved in a city-level case?

Mondolfi has a theory for why she was detained: It was done to rattle her after months of protesting. She notes it was her group that spotted John Kelly — former Homeland Security chief and White House chief of staff under President Donald Trump — touring the Homestead shelter last month, around the same time congresswomen were being denied entry. Soon after Kelly's visit became public, CBS News confirmed he had joined the board of Caliburn International, the for-profit company that runs the place.

"They are trying to scare me, intimidate me," Mondolfi says. 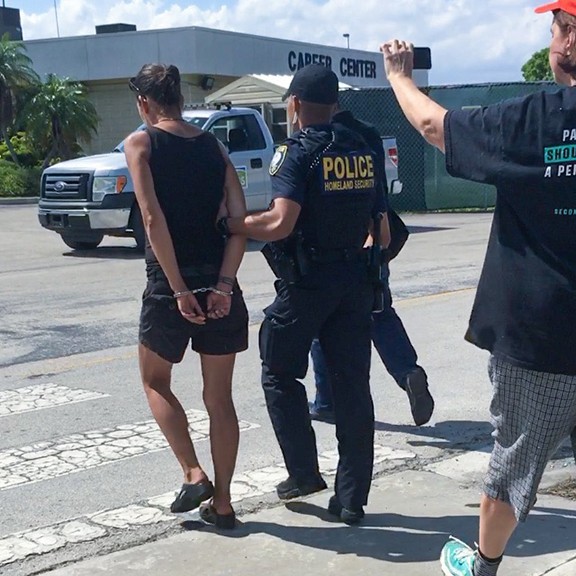 Her detainment comes amidst a series of instances of the government watching and prosecuting protesters. Earlier this year, the Intercept revealed that DHS had monitored anti-family separation protests held across the country, treating them as if they were security threats. A contractor working with the agency reviewed demonstrations across South Florida, from West Palm Beach to Miami. The information was shared with DHS and state-level law enforcement.

Meanwhile, two University of Arizona students were arrested in late March for protesting the appearance of Customs and Border Protection officers. The Arizona Republic reported they were among people who stood outside the event calling the officials “murderers” and “an extension of the KKK.” A group of protesters followed the agents as they left the presentation, calling them "Murder Patrol." Anti-Dakota Access Pipeline protesters have also been arrested.

At the Homestead shelter, another protester was detained on April 24. That day, MDPD officers handcuffed a New York man named Joshua Rubin and put him in the back of a squad car. Rubin said the cops told him he was being stopped on suspicion of trespassing. He refused to give them his name, he said, because he was on a county road. Eventually he identified himself and was released. MDPD told New Times it had no record of Rubin's detainment.

"You have to expect, when you're protesting, that people are going to try and get you to go away," said Rubin, who for months held a one-man vigil outside a camp for migrant teenagers in Texas. "But the extent to which it's happening here is more extreme."

Mondolfi says Homeland Security officers began showing up at the facility several weeks ago. When the two men approached her last Friday, they asked for her ID, but it was in her car. She says she asked to go get it, but instead ended up being questioned in the back of a police car. The MDPD and schools police cars showed up.

Daisy Gonzalez, a spokeswoman for Miami-Dade County Public Schools, tells New Times there is no record of a call for service on that date, and questioned whether a photo provided by protesters was actually taken on the date in question. After publication, she said a school officer responded after the Department of Homeland Security "put out an emergency call for back-up." When the officer arrived, the situation had already been handled, so he cleared the incident without taking action. MDPD did not respond to a request for information. 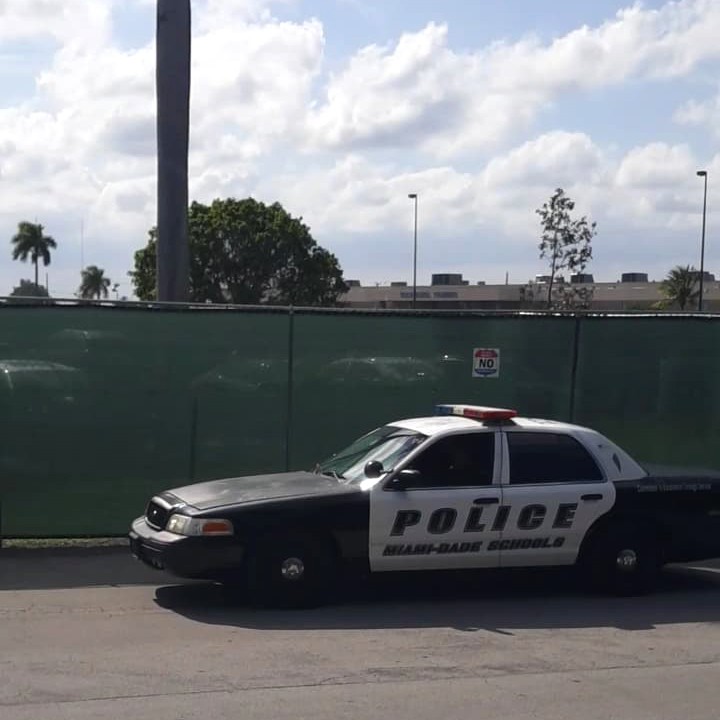 Courtesy of Alessandra Mondolfi
For her part, Mondolfi says she hasn't been back to the shelter since the day she was detained.

"I am not in Homestead; I have not been all week," she says. "I'm not able to do the work that I'm doing. And I am scared, which is all the things they want. They want you to be scared, they want you to be intimidated... and at this point, they're winning, and that's angering me."
KEEP MIAMI NEW TIMES FREE... Since we started Miami New Times, it has been defined as the free, independent voice of Miami, and we'd like to keep it that way. With local media under siege, it's more important than ever for us to rally support behind funding our local journalism. You can help by participating in our "I Support" program, allowing us to keep offering readers access to our incisive coverage of local news, food and culture with no paywalls.
Make a one-time donation today for as little as $1.