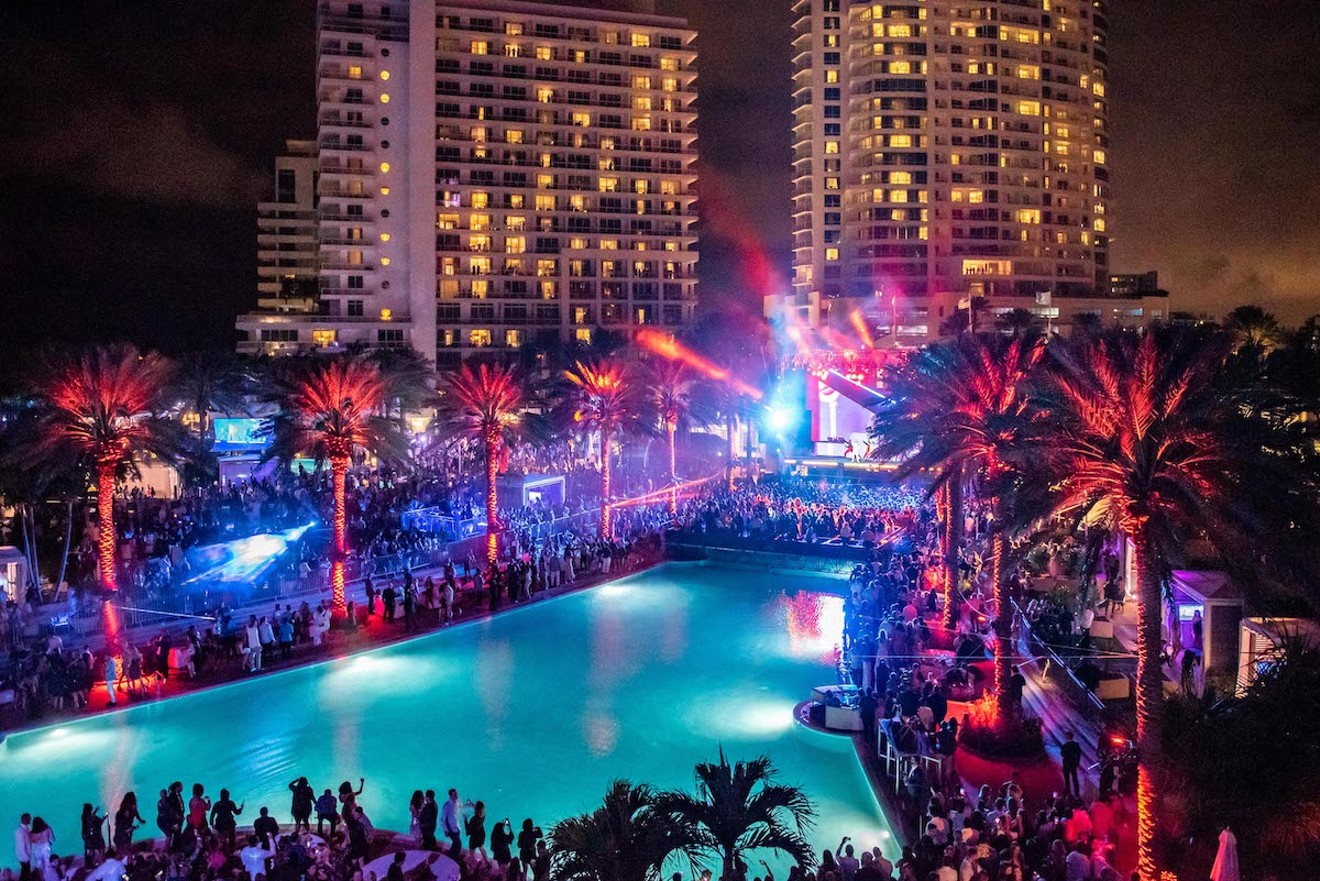 Don't sleep on all the New Year's Eve fun in Miami. Photo by Chris Carter
Bloody but unbowed, we somehow lived to see the turn of a new decade. A monumental achievement such as this deserves to be celebrated, so no excuse will justify staying home this New Year's Eve. Miami has seen soaring highs and all-time lows during the 2010s, all of which should be commemorated with a characteristically excessive party or at the very least a light buzz.

Whether you're trying to throw down until January 2 in one of Miami’s myriad clubs or looking to attend an early outdoor event where you can call it a night by 12:30 a.m., New Times has you covered with our selection of NYE parties. Start planning your midnight kiss and brace yourself for some obscene Venmo charges, because you're welcoming the roaring 2020s in Miami. 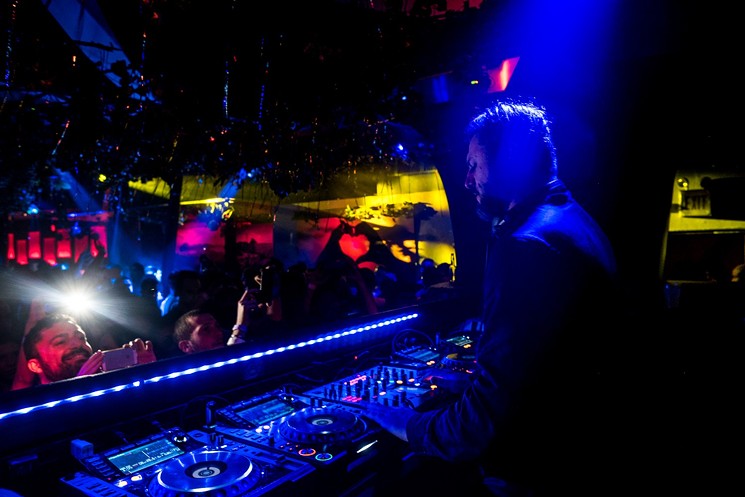 Solomun will play a lengthy set at Club Space.
Photo by Karli Evans
Solomun and Jamie Jones at Club Space. If you think about it, Space is the perfect place to ring in the new year: Dancing for hours on end is an excellent form of cardio and is a great way to stick to your resolution of proper diet and exercise. The evening's soundtrack will come courtesy of world-renowned DJs Jamie Jones and Solomun. Warning: Both are known for their marathon-like sets, so be sure to wear comfy sneakers and an effective pair of earplugs. 11 p.m. Tuesday, December 31, at Space, 34 NE 11th St., Miami; 786-357-6456; clubspace.com. Tickets cost $90 to $135 via residentadvisor.com.

The Knocks will be playing a groovy set over at Hyde Beach.
Hyde Beach at SLS South Beach
The Knocks at Hyde Beach. Want to party like a VIP but avoid pounding techno music? The Knocks have you covered. The electronic duo will deliver a gentler and more tropical sound at Hyde Beach in the wee hours of December 31. The Knocks saw success in the mid-2010s with the release of tracks such as “Classic,” featuring Powers, and “Kiss the Sky," a collaboration with Wyclef Jean. The combination of the pair's nu-disco sound and the beachside view will make for a quintessentially Miami way to ring in the new year. There will also be interactive performers, games, special guests, and an open bar from 9 to midnight. 9 p.m. Tuesday, December 31, at Hyde Beach, 1701 Collins Ave., Miami; 305-455-2990; sbe.com. Tickets cost $275 to $350 via tixr.com.

Boogie at the Anderson.
Courtesy of the Anderson
NYE Powder Disco at the Anderson. In light of all the fun surrounding the impeachment, and with a presidential election around the corner, you might as well break out into an uplifting disco fever before the cynicism of the real world grabs you yet again. The Anderson will host a funky and low-maintenance disco party the entire night. DJs include Mark Brickman, Arremer Jack, and Dago, all of whom who will do their damnedest to transform the Anderson into Studio 54. Wear platform shoes and other '70s-reminiscent attire, and get grooving. 9 p.m. Tuesday, December 31, at the Anderson, 709 NE 79th St., Miami; 305-757-3368; theandersonmiami.com. General admission is free with RSVP. VIP options cost $175 to $299 via eventbrite.com. 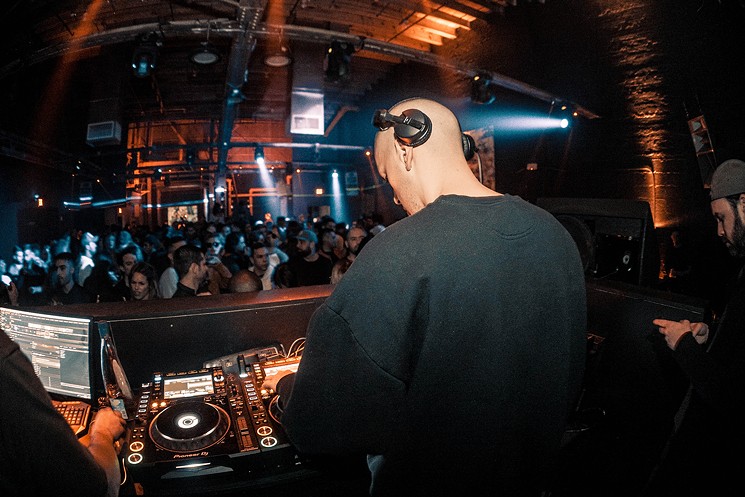 Fiin will spin at Treehouse for New Year's Eve.
Courtesy of the artist
Treehouse Local NYE Party. Treehouse is organizing a party that won’t force you to break the bank. The South Beach club will host a local lineup with an affordable cover and offer free entrance before 1 a.m. Treehouse is following in the footsteps of its NYE party last year by providing an alternative to the big names and the big crowds of tourists ubiquitous in Miami. The evening's roster includes Fiin, Daniela Macia, Burn1, and many other DJs. A complimentary champagne toast will be served at midnight. 11 p.m. Tuesday, December 31, at Treehouse, 323 23rd St., Miami Beach; 786-318-1908; treehousemiami.com. Admission is free until midnight with RSVP and $20 after via eventbrite.com.

Grab your empanadas and champagne at Las Rosas.
Photo by Alexis Prizzi
The Love Below at Las Rosas. Las Rosas goes hard year-round, and that won't change for New Year's. The beloved Allapattah bar will kick off the new decade with an epic showcase sure to satisfy hard-partying regulars and interlopers alike. Free empanadas will be served courtesy of event sponsor Milly’s Empanada Factory, and, yes, there will be a complimentary champagne toast at midnight. Manuvers, Pazmal, and Telescope Thieves will tend to the decks and curate the soundtrack to welcome revelers to the new and unexplored territory of 2020. 10 p.m. Tuesday, December 31, at Las Rosas, 2898 NW Seventh Ave, Miami; 786-780-2700; lasrosasbar.com. Admission is free.

The Jonas Brothers will close out 2019 in Miami.
Michele Eve Sandberg
The Jonas Brothers at Fontainebleau. The Jonas Brothers sure love South Florida: They kicked off their comeback tour in Miami this past August, played the Sunrise Arena in November, and are set to play the Y100 Jingle Ball at the BB&T Center this Sunday. The three siblings won't stay away from these parts for long: They're slated to close out the year at Fontainebleau Miami Beach. The event will be the rare Magic City NYE that's great for the entire family as well as the 21-and-up crowd hoping to rage and snap forced selfies with bougie celebrities. Fontainebleau is offering a family-friendly experience that includes a dinner buffet, an open bar (for extremely tired parents), big-screen TVs, and a viewing party separated from the 21-and-older attendees. A concert full of inebriated adults and starstruck teens — what can go wrong? 9 p.m. Tuesday, December 31, at Fontainebleau Miami Beach, 4441 Collins Ave., Miami; 305-674-4680; fontainebleau.com. Tickets cost $299 to $349 via tixr.com.

Lee Burridge and All Day I Dream will take over 1 Hotel in Miami Beach.
Photo by Chris Schiraldi
All Day I Dream Into 2020 at 1 Hotel. After a successful Art Basel edition at Island Gardens, All Day I Dream is back and ready to close out the year in Miami. Depending upon what you're trying to get out of your New Year's Eve experience, the light and airy sounds of the electronic record label might be the perfect way to end the decade — the beats are neither too slow nor too fast, and the ethereal melodies for which the imprint is known won’t have you throwing up in a bathroom stall before the clock strikes midnight. The lineup includes Sébastien Léger and Lee Burridge, the founder of All Day I Dream. It appears Miami holds a special place in the heart of the roaming party, and it wants to spend its last moments of the decade in the Magic City. 8 p.m. Tuesday, December 31, at 1 Hotel, 2341 Collins Ave., Miami Beach; 305-604-1000; 1hotels.com. Tickets cost $150 to $225 via exploretock.com.

Pitbull will close out the decade in Bayfront Park.
George Martinez
Pitbull at Bayfront Park. Some of your out-of-state friends will be stocking up on champagne and lobster in preparation for New Year's Eve; in Miami, you'll be loading up on croquetas and grabbing a quick cafecito before heading to see the city's global ambassador, Pitbull. Attendees hoping to catch sight of Mr. 305 himself at Bayfront Park Amphitheater can expect an epic production accompanied by some of the biggest hits of the 2010s. What's more, there'll be a bombastic and sparkling fireworks display for all of downtown Miami to enjoy. Sunday, December 31, in Bayfront Park, 301 Biscayne Blvd., Miami; 305-358-7550; bayfrontparkmiami.com. General admission is free. VIP tickets cost $295 to $495 via eventbrite.com.

Area 31 at the Epic Hotel will throw a spectacular New Year's Eve bash.
Courtesy photo
Age of Aquarius at Kimpton Epic Hotel. If you're looking to bid 2019 farewell in a decadent fashion, set your sights on the Kimpton Epic Hotel in downtown Miami. You'll have access to the 16th-floor pool deck, which offers a breathtaking view of the Miami River and the surrounding cityscape. In addition to offering enviable photo ops, Area 31 — the bar inside the Epic — will offer a high-end seafood buffet and a top-shelf cocktail lounge. The crisp air and shimmering night sky will make you never want to step into a crowded club again. Music will be curated by Kristian Caro, and sponsors include Ketel One and Don Julio. 8:30 p.m. Tuesday, December 31, at Kimpton Epic Hotel, 270 Biscayne Blvd. Way, Miami; 305-424-5234; epichotel.com; area31restaurant.com. Tickets cost $50 to $3,200 via eventbrite.com.
KEEP MIAMI NEW TIMES FREE... Since we started Miami New Times, it has been defined as the free, independent voice of Miami, and we'd like to keep it that way. With local media under siege, it's more important than ever for us to rally support behind funding our local journalism. You can help by participating in our "I Support" program, allowing us to keep offering readers access to our incisive coverage of local news, food and culture with no paywalls.
Make a one-time donation today for as little as $1.