Photo by Amadeus McCaskill
The old year is finally over, and with it go all your bad memories and habits — or so you'd like to think. You probably have a few achievements in mind for 2019: Perhaps you've purchased a gym membership you swear you'll still be using in March, or maybe you've set goals for your career or relationships.

Resolutions tend to address individual intentions, but there's always room for improvement in the communal sphere. As music fans, we've all been guilty of some bad habits, among them staring at our phones during concerts and promising friends we'll make it to their shows before staying home to watch Netflix instead. But are these failures personal, or are they embedded in Miami's music scene? Flaking on friends' shows isn't cool, but it's also incredibly common.

Perhaps there are steps we can take collectively to support people who are already active in the local music scene and to welcome those who have yet to learn about the talent in their own city. Miami would benefit by implementing these musical resolutions in 2019:
1. Open more decent midsize venues. This resolution is on every Miami music lover's wish list every year. And for a while, it seemed as if the powers that be (AKA developers) were finally listening to the people. But the battle for successful midsize music venues in Miami has always happened in fits and starts. Remember the Stage? Before the venue shuttered in 2015, it was home to shows by virtually every local band imaginable, along with international acts such as Of Montreal and St. Vincent. More recently, the Wynwood Yard — boasting residencies by Keith Johns and Cortadito, Reggae Sundays, and pop-up performances by Shakira and Coldplay's Chris Martin — seemed poised to take the mantle as Miami's go-to midsize spot, albeit an outdoor one. But those dreams were dashed in September when it was announced the Yard and its neighbor, O Cinema Wynwood, would close in early 2019 to make way for apartments and retail shops. Thanks again, developers. It's not a stretch to imagine a place such as the Olympia Theater stepping up to host concerts by artists with a South Florida following. A February Mavericks concert at the downtown icon is a promising sign that music in intimate venues is not yet dead in Miami. 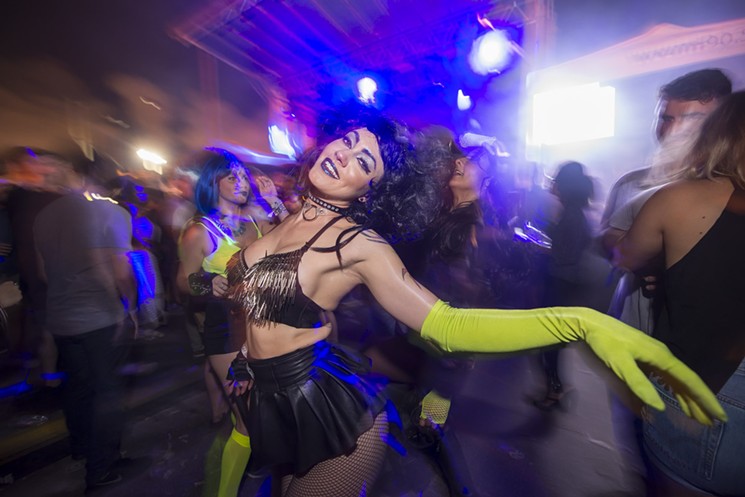 Photo by Alex Markow
2. Nurture gender equity in festival lineups. We're tired of writing about this one and look forward to the day when we don't have to. No matter the genre, women were still lacking in South Florida's festival lineups in 2018. Among the worst offenders was the Tortuga Music Festival, booking only two women to play the multiple-stage, three-day event. But the past year also saw signs of progress. Rolling Loud took a leap forward by upping its number of women performers from two in 2016 and 2017 to a dozen in 2018, including headliner Cardi B. And kudos to Jazz in the Gardens for modeling gender equity. The next frontier is making space for genderqueer, trans, and nonbinary artists.

Photo by Monica McGivern
3. Book more local acts to play festivals. Regional music festivals have become a fixture in South Florida the past few years. Though Okeechobee Music & Arts Festival recently announced it will not return in 2019, the area is still home to festivals such as Ultra, Afro Roots, Sunfest, Riptide, Rolling Loud, House of Creatives, and III Points. Among them, III Points and House of Creatives are far and away the best at presenting local talent to the fans who flock to the Magic City for performances by big-name acts. Putting local performers in festival lineups is also an effective way to show Miamians that great music is made here year-round. Though III Points lineups pull in more acclaimed talent every year, festival organizers remain loyal to local acts, including 2019 performers Virgo, Poorgrrrl, Haute Tension, Plastic Pinks, and many others. Here's hoping the highly anticipated fest's success inspires others to do the same.
click to enlarge

Photo by Michele Eve Sandberg
4. Stop treating live music as background noise. Locals frequently pay admission for curated events — and musicians usually play them — but attending an event for the sole purpose of watching an artist play is not the norm in the 305. In a city that's historically been seen as a club and party mecca, treating music as background noise is an unfortunate but deeply embedded habit. Still, there are glimmers of hope indicating that locals want to show love to the talent brewing in the Magic City by giving it their undivided attention. Las Rosas' Words & Wine nights have become increasingly popular weekly open mikes, and Prism Creative Group's Listening Den series encourages locals to put away their phones and halt the side conversations while performers are onstage. The list of talented bands, DJs, and singer-songwriters in Miami is seemingly endless, and it would be a worthy goal in 2019 to treat them as artists with messages to convey rather than light entertainment used to build ambiance for other creators.
5. Integrate busking into daily life. In recent years, Miami has tried to become New York's southeastern cultural counterpart in all the wrong ways. Rent prices continue to soar, the sky is almost completely obstructed by cranes and high-rises in certain parts of Brickell, and historically diverse neighborhoods are being overtaken by peddlers of artisanal avocado toast. Still, one common aspect of cultural hubs such as New York and New Orleans has not yet made its way to the Magic City. Though jaded New Yorkers will likely shudder, buskers would be a welcome addition to daily life in Miami. Busking offers musicians another way to earn a few bucks, and bumping into live music on the street is a pleasant way for locals to break the monotony of morning commutes and social media. Buskerfest Miami's annual event is a promising and PAXy's Wake Up Miami! series has been well received by commuters on public transit. This could be the year when the 305 integrates the time-honored tradition of busking into everyday life.
KEEP MIAMI NEW TIMES FREE... Since we started Miami New Times, it has been defined as the free, independent voice of Miami, and we'd like to keep it that way. With local media under siege, it's more important than ever for us to rally support behind funding our local journalism. You can help by participating in our "I Support" program, allowing us to keep offering readers access to our incisive coverage of local news, food and culture with no paywalls.
Make a one-time donation today for as little as $1.