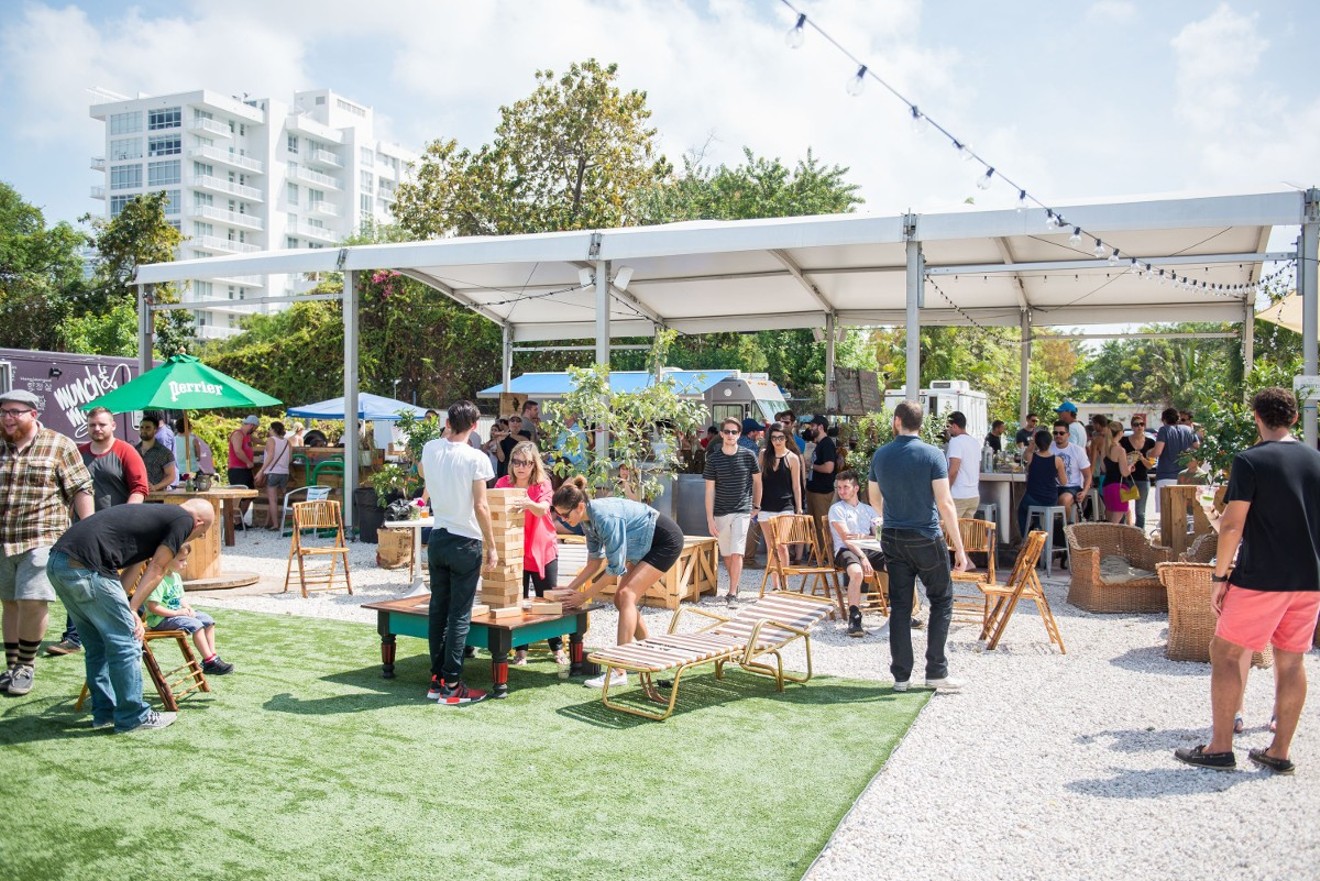 The Wynwood Yard Photo by Chris Carter
What's left of bohemian Wynwood is on the way out.

The transformation of the arts neighborhood that was once defined by beer-fueled gallery walks and low-rent galleries began years ago as expensive restaurants and high-rent apartments took over. And now two of the cultural institutions that survived the initial onslaught will close in the first half of next year to make way for a giant apartment building and stores to be developed by the Miami homebuilding giant Lennar, it was announced Wednesday. The Miami Herald broke the story that the Wynwood Yard and O Cinema, which both knew they were on borrowed time, will close.

The Wynwood Yard, which began operating in 2015 near North Miami Avenue and NW 29th Street, has been both a culinary incubator and entertainment center in the neighborhood for nearly three years. The Yard began as a temporary facility when founder Della Heiman persuaded property owner David Lombardi of Lombardi Properties to lease her the vacant space for ten months for her culinary incubator project. "That turned into an almost three-year run," she says.

Although there's no set date, Heiman says the Wynwood Yard will close around spring 2019 to make way for an 11-story structure called Wynwood Green. According to the Herald, the building's 189 residential rental units, 324 parking spaces, and about 17,000 square feet of commercial space will tower over the neighborhood.

The Wynwood Yard has become the area's number one gathering spot, offering live music, affordable food and drinks, and a large dose of community. Heiman says of the "scrappy" project that turned into Wynwood's very heart and soul: "I walk into the Yard and see people with kids or on dates and see them celebrating magic moments."

Heiman says she always knew was temporary and expresses gratitude to Lombardi for sharing her vision. "David has been forthright in communicating with the Yard. He supported us in doing something that was out-of-the-box."


"I think everyone has always known that our time in Wynwood was borrowed."

Still, the realization that the property was ultimately sold is a bitter pill to swallow. "I'm finally addressing the reality I knew would eventually come. You get very attached to spaces and people. Obviously, it doesn't make me happy to think we won't have that in Wynwood anymore."

Heiman, who is a partner at Jackson Hall in the Civica Center of the Jackson Health District, is working on a version of the Wynwood Yard to open in North Beach. "Every time I go to North Beach, I get super-energized."

Plans for the North Beach Yard are moving forward, and Heiman anticipates that permitting will begin this fall for a 2019 opening date. She hopes to take what she's learned at the Wynwood Yard to make the North Beach version even better. Further down the road, she plans to share the "Yard" concept with other cities.

Still, with all of this growth, Heiman's first love is the Wynwood Yard — possibly because of the learning process she's experienced. In three years, the Wynwood Yard has seen more than its share of ups and downs. From hosting Shakira while she serenaded fans last year to closing for weeks because of Miami's Zika scare, the Yard has been the epicenter of Miami news. Says Heiman: "Our team and the community have really had such profound learning and connection experiences. It's pretty amazing to see the power of what happens when people come together."
When O Cinema opened in Wynwood eight years ago, it wasn't the first indie theater in town — venues such as the Miami Beach Cinematheque had already been operating for years. But the new theater, cofounded by Kareem Tabsch and Vivian Marthell, inspired the artsy crowd that once collected at its neighboring art galleries to rediscover a love of film — effectively launching a renaissance of interest in indie cinema citywide.

After its first successful years at the original Wynwood location, O Cinema partnered with Miami Theater Center in Miami Shores in 2012 to show films there as well. In 2014, the art house opened another space, this time in North Beach, at the Byron Carlisle Theater. (Despite some recent drama over a city audit, Tabsch says things are now settled.) Both outposts of O Cinema earned warm welcomes from their surrounding communities. But the Wynwood location always felt like the main attraction — it's where O staged big events such as cosplay parties, drag performances, and even a panel of Cocaine Cowboys alums.

"We've been so fortunate to help spearhead this growth of independent film in our community," Tabsch says. "There are more and more opportunities for filmmakers to tell their stories and to tell them in unique, authentic, and local ways. And now there are a bunch of places to show them, places like O Cinema and all the other great arthouse theaters in our community."

O Cinema will continue to screen films in Wynwood until next spring; Tabsch says an exact closing date hasn't been determined. He also won't say where O Cinema is looking to go next but promises "growth and expansion over the next year to 18 months." And though the news of the Wynwood icon's closure might be shocking to some, Tabsch says it was no surprise to him or his team.

"I think everyone has always known that our time in Wynwood was borrowed... There's always the opportunity to bang on the landlord as being awful or something, but our landlord [David Lombardi] has always been really forthright with us and worked with us to make sure that we could be there as long as possible and kept us posted about what's going on."

Besides, he adds, "we live in Miami — everything is on borrowed time."

The announcement caps several years of increasing development in Wynwood, which got its start as a center for small, independent art galleries. Many of those have left the neighborhood, now populated by restaurants and a scene far more commercial than anyone would have expected when developer Tony Goldman dreamed up the open-air gallery of murals called Wynwood Walls in 2009.

Lennar, among the nation's largest homebuilders according to Business Insider, will build its first project in the city of Miami on the site, the Herald reports. The plans call for an 11-story apartment building with shops. The city’s Urban Development Review Board will assess the plan this Thursday. The Wynwood Design Review Committee will consider it on an apropos date: September 11.

Manny Gonzalez, executive director of the Wynwood Business Improvement District, forwarded New Times' request for comment to a public relations firm, and a message to Lennar has not yet been returned. This post will be updated with any comments.
KEEP MIAMI NEW TIMES FREE... Since we started Miami New Times, it has been defined as the free, independent voice of Miami, and we'd like to keep it that way. With local media under siege, it's more important than ever for us to rally support behind funding our local journalism. You can help by participating in our "I Support" program, allowing us to keep offering readers access to our incisive coverage of local news, food and culture with no paywalls.
Make a one-time donation today for as little as $1.