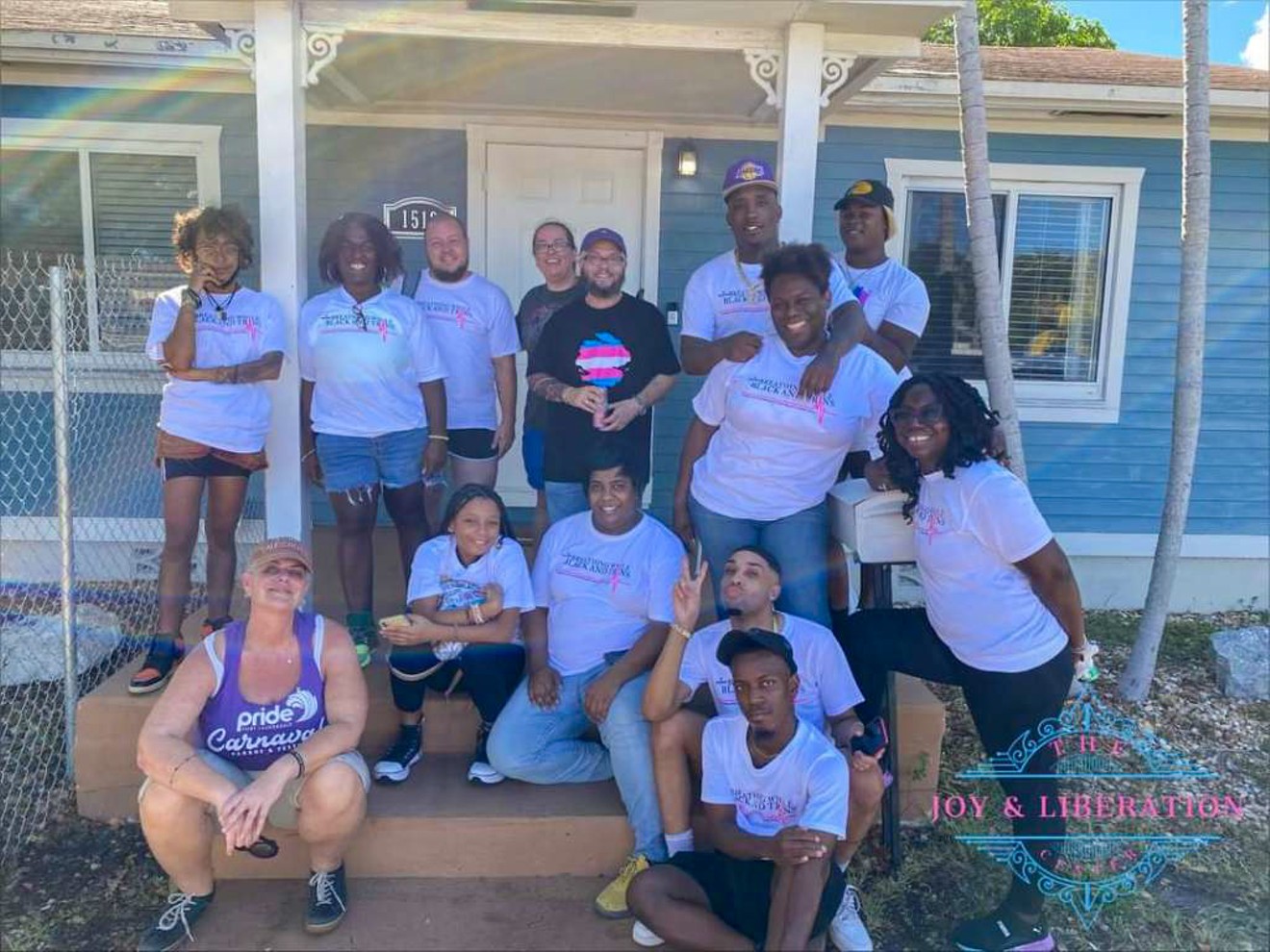 Ashley and Morgan Mayfaire, founders of TransSocial, with organization members at the Joy and Liberation Center in Dania Beach. Photo courtesy of TransSocial
Florida’s leading transgender and nonbinary-focused nonprofit, TransSocial, never had a permanent physical space to call its own until now. An $83,000 grant by pop star Ariana Grande allowed it to finally open its first two brick-and-mortar facilities, called the Joy and Liberation Centers.

Ashley and Morgan Mayfaire, TransSocial’s founders, have assisted with almost 500 name changes and served more than 1,000 trans individuals in medical referrals, legal resources, and mental health services across the state since 2016. The new centers in Miami-Dade and Broward counties will continue to offer all of these services but with a more hands-on, community-building approach.

“We want to collaborate on a space that is by and for trans people, a place where they can come and just be themselves, feel supported, and interact with other trans individuals,” Ashley tells New Times.

The organization's lack of a physical space set up obstacles in stability and accessibility, she explains.

“We used to have to find, borrow, or rent spaces from people,” Ashley adds. “It was tough to not have a space that the trans community could consider home.”

However, TransSocial's persistent advocacy did not go unnoticed.

Grande stumbled upon the group in the past as partners in Trans Santa, a mutual aid campaign that connects anonymous gift givers with impoverished queer youth. The longtime LGBTQ ally and her label, Republic Records, chose TransSocial as one of the 18 trans organizations across the United States to benefit from the popstar’s online monetary fundraiser, Protect & Defend Youth Fund. Since its launch on March 31, Trans Day of Visibility, the pledge has raised more than $3 million and continues to grow.

The artist promised to match up to $1.5 million in donations to give “critical funds to organizations providing direct services... and advocating for the rights of trans youth in states currently targeted by anti-trans policies."

“I think the fund was really to support trans youth in the South,” Ashley says. “Removing access to healthcare just makes it a really hostile place.”

Grande’s grant prompted smaller organizations to contribute to the project as well.

“It’s no small task,” Ashley says. “What gave us the security of having a few years' worth of operating costs is this generous grant from Ariana Grande.”

After Florida removed HRT coverage for trans adults from Medicaid on August 21, the duo felt it was their duty to assist the thousands of lives impacted.

“It caused a tremendous amount of hardship for the most low-income, underserved portions of the trans community,” Ashley says. “It takes a lot of time and effort to navigate the insurance exclusions when they have to leave their current providers.”

TransSocial is the only organization in Florida to offer HRT copay assistance entirely free of charge and without a requirement to enroll in any programs. Some organizations, such as CAN Community Health, offer similar assistance but require the client to take pre-exposure prophylaxis or PrEP.

TransSocial will continue to offer free programs, including fee assistance for legal name changes, support groups, and educational training both virtually and in person.

Most of the Joy and Liberation Centers’ services cater to those 18 years or older, but they will also offer external resources to others. Additionally, while TransSocial holds a trans and nonbinary focus, its services are open to all LGBTQ-identifying people.

The group will collaborate with the McKenzie Project to offer support groups for people living with HIV, entrepreneurship classes, HIV testing, and linkage to care.

“It just seems like we could take care of the whole person,” Ashley says. “We connect them to social support, legal processes, and also give them a community drop-in space where they could just be.”

During their search for rental space, the pair initially planned to keep details about the organization under wraps from the landlords out of fear for their safety — Morgan as a trans man and Ashley as his partner and ally.

“We were operating without any kind of transparency as to what kind of organization we were,” Ashley says.

Finally, they came across a reassuring and lucky surprise. TransSocial's Miami landlord held a much closer tie to the trans community than they could fathom.

“He was so insistent on knowing exactly what we did, but I got so scared and nervous,” Morgan says. “Eventually, I told him, and he looked at me and said, ‘I have a trans family member. Now that I know what you’re doing, we’ll take $100 off a month.’”

The centers are located at 8390 W. Flagler St., Miami, and 1518 SW Second Ave., Dania Beach. The spaces are not limited to South Floridians, though. Both locations provide assistance to any LGBTQ-identifying people throughout Florida.

Each space was strategically chosen based on its close vicinity to transportation and overlapping legal services. The Miami location is only about three miles from Florida International University and sits right beside Apex Fingerprinting, a facility used during the name change process. The Dania Beach location is about ten miles south of Wilton Manors, one of the most LGBTQ cities in the nation.

The grand opening celebration for the Miami center is Thursday, November 10, followed by the Dania Beach center on Saturday, November 12.

Joy and Liberation Centers. 8390 W. Flagler St., Suite 201, Miami; and 1518 SW Second Ave., Dania Beach; transsocial.org. Appointments are recommended.
KEEP MIAMI NEW TIMES FREE... Since we started Miami New Times, it has been defined as the free, independent voice of Miami, and we'd like to keep it that way. With local media under siege, it's more important than ever for us to rally support behind funding our local journalism. You can help by participating in our "I Support" program, allowing us to keep offering readers access to our incisive coverage of local news, food and culture with no paywalls.
Make a one-time donation today for as little as $1. 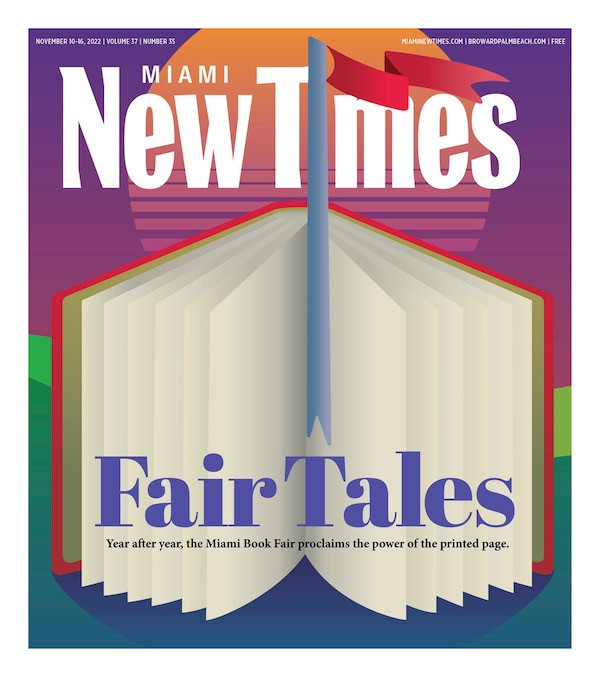