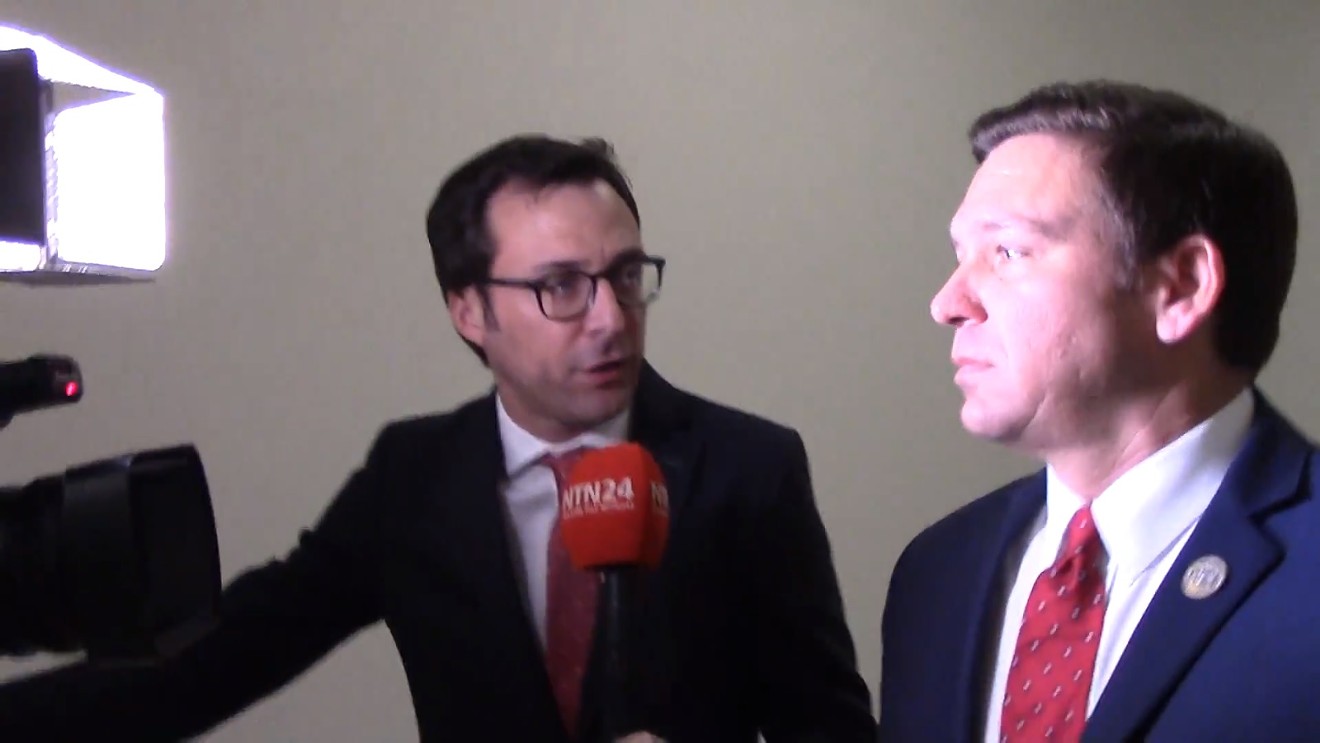 Congressman Ron DeSantis is arguably the frontrunner to become the Republican Party's candidate for Florida governor in 2018 thanks to President Donald Trump's nearly random endorsement of him weeks ago.

DeSantis is, otherwise, the sort of all-nonsense legislator who has both taken funding from and been endorsed by the National Rifle Association, the type of person who tweeted his "thoughts and prayers" to Parkland shooting victims yesterday but who absolutely will not do anything to address gun control, access to better mental health services, white-supremacist militias, general white supremacy, domestic violence, or any of the other thousand toxic aspects of American society that contributed to Nikolas Cruz's decision to murder 17 people at Marjory Stoneman Douglas High School yesterday.

Want some proof? A reporter for the Spanish-language NTN 24 TV-news station asked DeSantis on video today whether "more gun control in schools" is necessary after the Stoneman Douglas shooting. DeSantis' brave, principled response was to run away.

"I have to go down," DeSantis says at the 1:20 mark in the clip above, referencing the fact that he needed to enter the legislative chamber on a floor below. "We'll have time to debate this stuff."

The Democratic Governor's Association has since seized on the clip and posted it to its own YouTube page in an attempt to shame DeSantis. The congressman's biggest opponent in the race, Florida Agricultural Commissioner former U.S. Rep. Adam Putnam, has also had a shameful day: He was forced to "postpone" pushing for the state to loosen background-check laws and let people with incomplete background data receive concealed-carry permits after 90 days.

In the rest of the NTN 24 clip, DeSantis first asks who the news reporter even is and then goes on to defend his history of pro-gun votes.

"If there are people out there that are dangerous to society, that needs to be addressed before we have this type of response," DeSantis says.

"Did you vote against that last year?" a cameraperson responds, referencing DeSantis' February 2017 vote overturning an Obama-era rule that blocked some citizens with histories of mental illness from buying guns.

(The rule required the U.S. Social Security Administration to report people who receive disability benefits and have mental illness to the FBI. For what it's worth, the American Civil Liberties Union also opposed the rule and said it discriminated against nonviolent mentally ill people and wasn't actually based on science.)

"That was different; that was a much different thing," DeSantis says in the video, adding that the Obama-era rule he voted to repeal presented "due-process" issues. He then says he would support taking someone's guns away if a person were "adjudicated" as mentally ill and dangerous.

"Should we increase gun control in schools?" the reporter then asks. DeSantis ducks into a stairwell.